After two weeks in Israel we traveled to Jordan for a week of touring there. It wasn't nearly enough time! We hope someday to return and spend at least an additional week.

Click to see a description of our adventures in Israel. 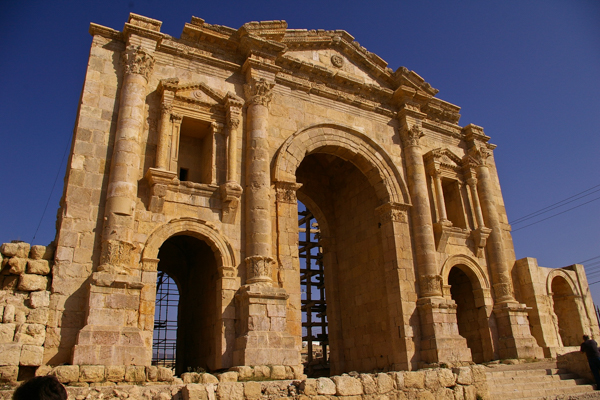 We stayed in Amman for the first two nights in Jordan. Early the first morning we loaded onto a bus for the trip to Jerash.

The standing ruins date back to Roman times, but the area has been inhabited since approximately 4500BC. Its name in antiquity was Gerasa and it is so mentioned in the Bible.

This monumental arch was built for the visit of Emperor Hadrian in 129AD. 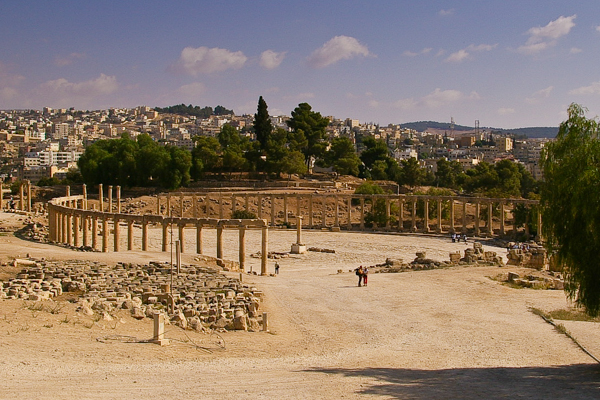 This magnificent oval forum is at one end of the Roman cardo or main artery.

The columns have been restored as has the arch above. In fact we were told that Jordan's nomination of Jerash as a UNESCO World Heritage Site has been complicated by the amount and quality of restoration done here. Never mind, it makes it much easier to visualize the city as it once was.

The modern city of Jerash can be seen on the hill behind the forum. 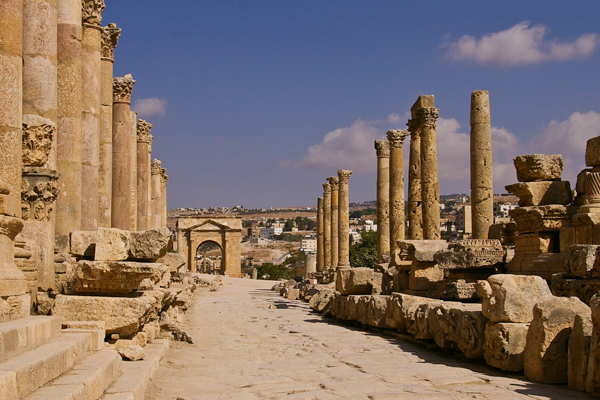 Here is a portion of the main street, which reaches from the arch in front, behind me to the forum. The planned extension to Hadrian's arch was never completed.

There were so many wonderful things about Jerash and no space to include them. It is truly a magnificent place. 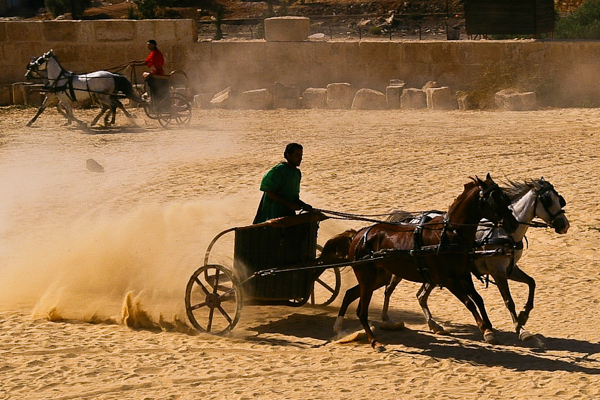 It may not be for everyone, but we thoroughly enjoyed a spectacle put on at the Jerash hippodrome.

There were a number of exhibits including simulated gladiator bouts and an interesting demonstration of Roman battle formations, but my favorite was the chariot race, of course.

The picture doesn't quite capture how the chariot skidded sideways around the sharp corners. I'm not sure how the drivers kept their feet.

After Jerash we stopped to visit Ajloun Castle. In an area rife with "crusader castles," the Arabs built this one in the 12th century as defense against the invading Europeans.

The crusaders were finally expelled from TransJordan at about the same time. The fortress was then used to protect sensitive trade routes in the area. 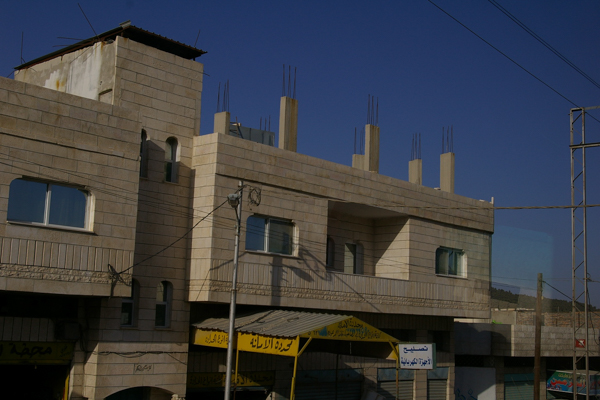 I've included this modern building as an example of something we saw many times in our travels through Jordan.

Islamic law forbids the charging of interest so borrowing money to build or buy a house isn't really an option. What people do is save enough money to complete part of their planned building. The rest is left unfinished until they have accumulated additional funds.

An approach such as this would prevent the common western practice of over-leveraging! 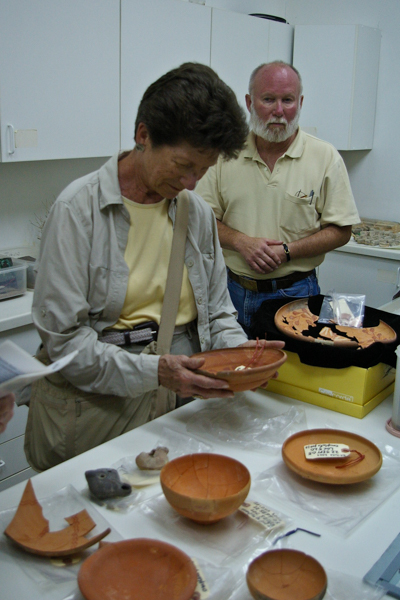 Back in Amman, we visited the American Center of Oriental Research (ACOR) for lectures about their work and various archaeological sites in Jordan - particularly Petra.

One of the treats for me was holding (verrrry carefully) artifacts that are being restored.

These terra cotta bowls were incredibly delicate. I was amazed that they survived the millennia in as good shape as they did. 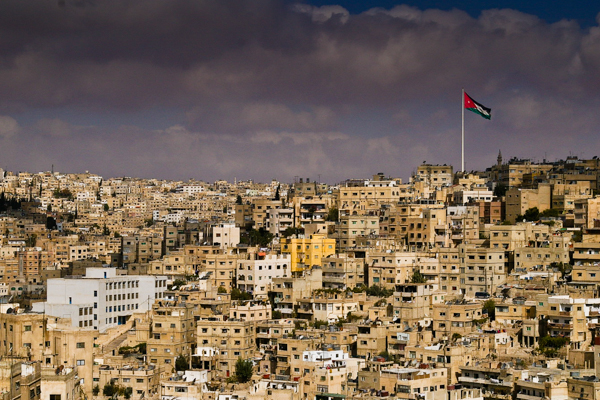 The next day we toured Amman, the capital of Jordan. A huge proportion of the population of the country lives in this city – as this picture shows, it is densely settled.

Unfortunately our hotel was in the suburbs, which was great for access to the airport and traveling outside Amman, but it made it impractical to get to the downtown area for shopping or dining.

This picture was taken from the top of the Amman citadel. 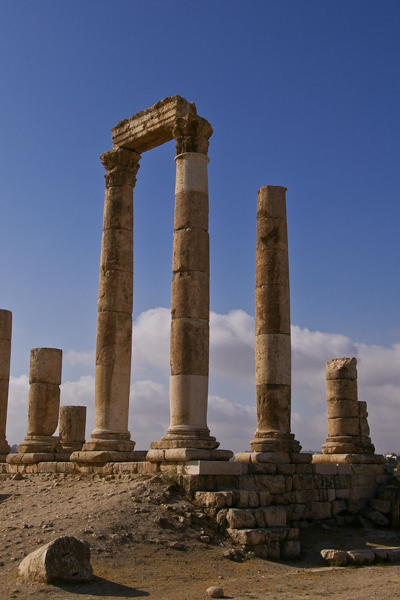 Atop the citadel are ruins of many eras dating as far back as a Neolithic settlement. Most of the area is still awaiting excavation and analysis.

This temple of Hercules dates to the 2nd century AD. The standing columns were re-erected by ACOR. 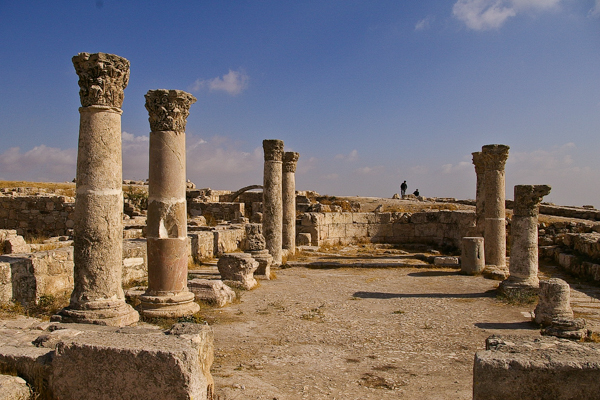 This church, built around the 5-6th century AD, is in the basilica format. This shape was developed in the East and assimilated by the Romans for both public and private spaces. Later it was adopted for churches.

The central nave, rounded apse, and side aisles separated by columns are typical.

This domed building is not the 8th century Umayyad palace – it is merely a reception hall! The dome is a reconstruction.

The palace itself has not been restored, but the excavations show how extensive it had been.

The commanding height of the citadel is evident from this overview of the Roman city center.

The theatre can be see in the lower right. The open space to its left is the forum. All of this is preserved in busy downtown Amman. 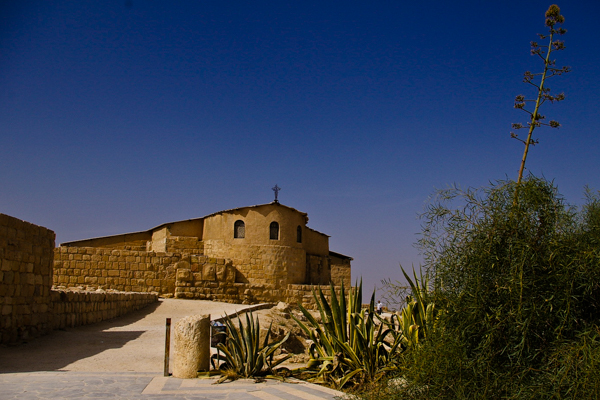 We left Amman the next day for our journey to Petra. The first stop was Mt. Nebo.

The Memorial Church of Moses is constructed over the remains of a much older basilica with elaborate and well-preserved mosaic floors. The site is now owned by the Franciscans. Check the link above for views of the mosaics. 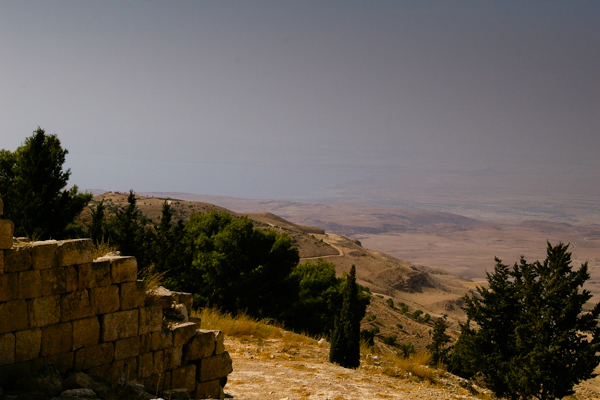 The story of Moses' death on this mountain is described in the book of Deuteronomy, chapter 34:

Then Moses climbed Mount Nebo from the plains of Moab to the top of Pisgah, across from Jericho. There the LORD showed him the whole land.... Then the LORD said to him, "This is the land I promised on oath to Abraham, Isaac and Jacob when I said, 'I will give it to your descendants.' I have let you see it with your eyes, but you will not cross over into it." And Moses the servant of the LORD died there in Moab, as the LORD had said.

I hope Moses had a clearer day! With a good imagination you can barely make out the Dead Sea and the valley of the Jordan in the haze. 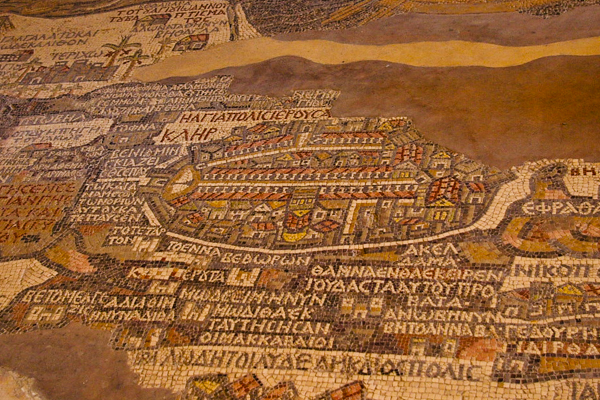 Our final stop as we headed south was in Madaba, where we saw this famous mosaic map of the Middle East.

The pictured detail is of Jerusalem. The cardo can be clearly seen running horizontally through the center of the city.

Unfortunately only about a quarter of the original map survives.

Madaba is a place where I would like to spend much more time. Alas, we only had a couple of hours.

Please visit our page on Petra.