Israel – The Dead Sea and Environs 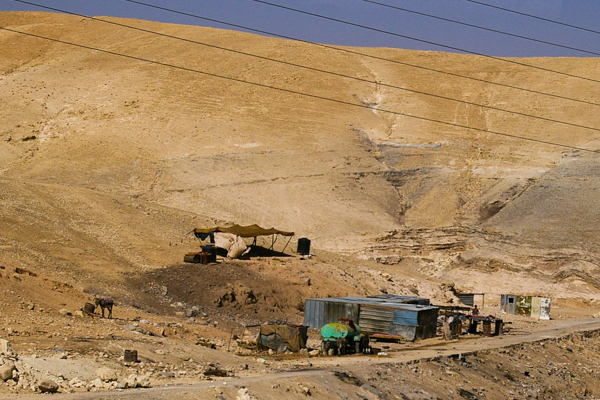 After leaving Jerusalem, we drove down, down, down toward the Dead Sea and passed through the most desolate countryside I've ever seen.

There are people who live here – almost all Bedouin. We Arabian horse owners tend to romanticize the Bedouin existence, but this is a glimpse of what it really looks like – at least in Israel.

There were other camps that had traditional black tents, but they were too far from the road to capture a decent picture. 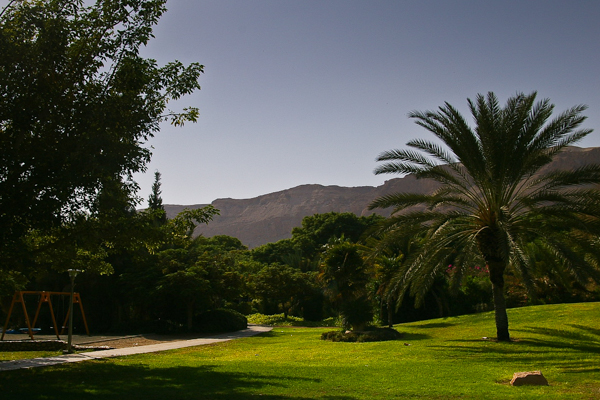 We stopped for lunch at the Kalia kibbutz. The lush foreground contrasts with the barren mountains, which are like the picture above.

The greenery comes at a price. This is the only place I've seen drip irrigation for cactus!

I'm sorry we didn't stay here. We traveled all the way to the southern shore, taking hours to get there for a 15 minute dip in the icky water. And that left us hours that we had to travel back up the following day. The time could be better spent. 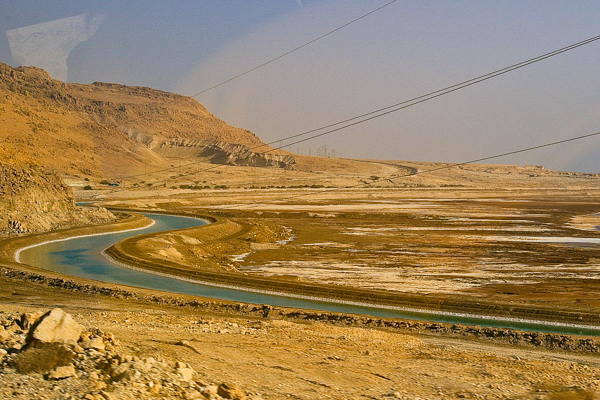 Due to water that is diverted in the north to irrigation, the Dead Sea is getting deader and dryer as the years pass. Much that had still been under water when Jim visited Israel in the early 70s is now dry land. The shoreline is unstable and dangerous due to the potential for abrupt subsidence. There is a potential plan to save it, but many obstacles to be overcome.

A canal now connects the northern section of the sea with the southern where the extraction facilities are located. 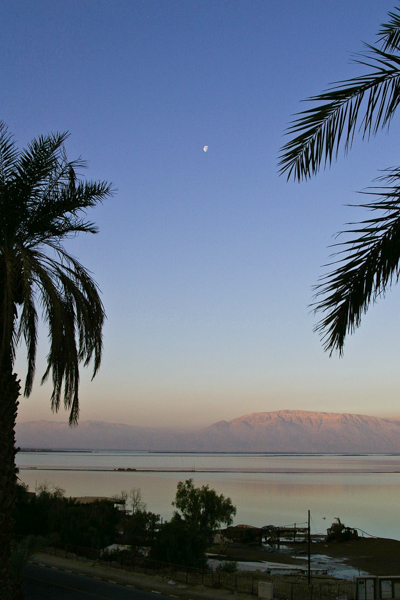 After a long day on the bus, we finally reached our hotel at the southern end of the Dead Sea.

Usually Elderhostel hotels are very nice. Moreover the hotels and restaurants and other eateries in Israel were uniformly excellent. This one was an exception. The room was dirty, the tap water was not potable, they charged an outrageous price for bottled water and the food was not very good. It's only recommendation was that it was the best to be had for a reasonable price at this area.

This is the view from our hotel room overlooking the Dead Sea, which here at least has water in it, and the mountains of Jordan in the distance.

Since we had come all this way, I was determined to take the opportunity to float in the Dead Sea. Jim, having done so many years earlier, passed. It was a wise decision.

Yes, the high mineral content makes the human body very buoyant, as can be seen here. Whether it was that or additional pollution that made the water gross, I can't say, but the best description is "icky."

Salt was encrusted everywhere. The metal platform to the right of this image shows salt "feet" on the metal bars. 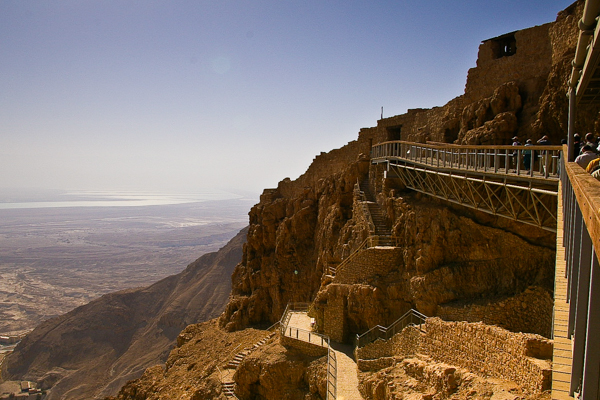 The highlight of our visit to this area was a trip to Masada.

We took the cable car rather than the "snake road" that zig-zags up the mountain. The final reaches can be seen here under the walkway from the cable car. A few of our number did elect to hike down after our tour. They were accompanied by our medic ... just in case!

The Dead Sea can be seen in the background. 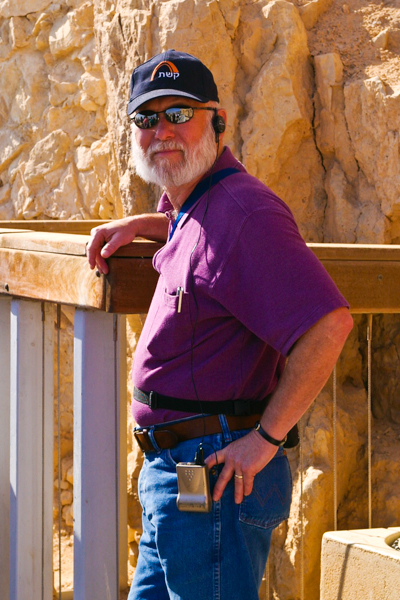 Jim is wearing one of technology's great innovations for group tours. We were each given a small fanny pack and earphones. The pack contained a receiver that was keyed to a broadcast unit worn by our guide. This made it possible for all of us to hear even in noisy locations or when we were spread out.

Since this time the technology has been much improved (no more fanny packs), but this was our first encounter. 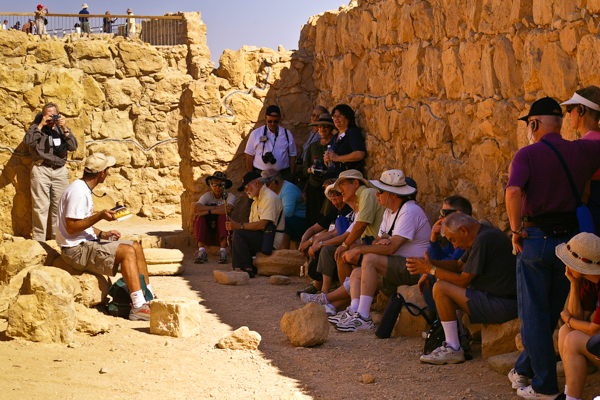 We were not a large group, but there was a lot of diversity, as is true on most Elderhostel tours. Often we learn as much from each other as from the tour leaders.

One of the "tourists" was something of an expert on the crusades, so she did some lectures on that topic. One was a Presbyterian pastor, who provided background at some of the Christian sites.

Our regular guide, Marty, always found a place where we could sit in the shade when he gave an extended presentation. 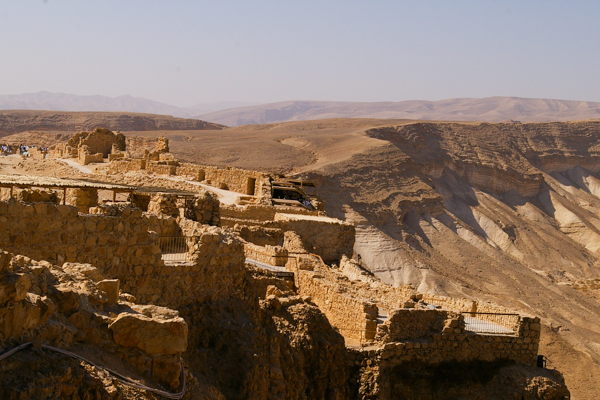 A view west from the summit of Masada showing some of the excavated ruins.

Herod the Great, who was considered a Roman collaborationist, was not a popular ruler. He built this fortress in the 1st century, B.C., on a rocky promontory as a refuge from his own people!

It was used again the in the 1st century, A.D., by Jewish rebels who revolted against Roman rule.

Another view west, this time showing the ramp that the Romans built to lift the siege. Josephus wrote that the defenders committed mass suicide rather than allow themselves to be captured. As just about everything else in this troubled land, controversy reigns and recent scholarship has questioned the traditional stories.

We were told that Masada's place in the national identity has changed over the years. At one time it was seen as a heroic "victory" of sorts, but now it has taken on an aura of defeat. Or not. Nothing is unambiguous. 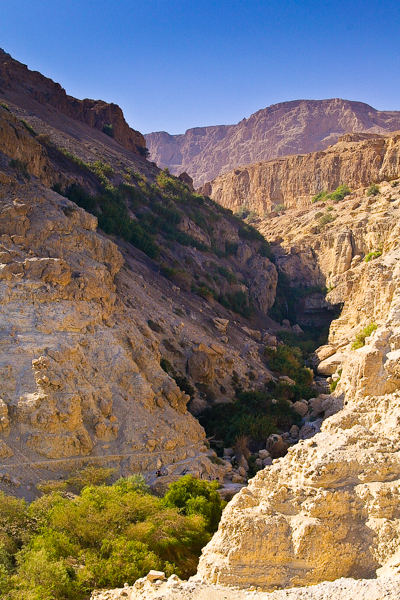 After Masada we ate lunch at the Ein Gedi kibbutz. Unfortunately we didn't have the time to hike up the wadi to the famous waterfall.

This is another place we would have preferred to spend time rather than travel all the way to the southern shore. 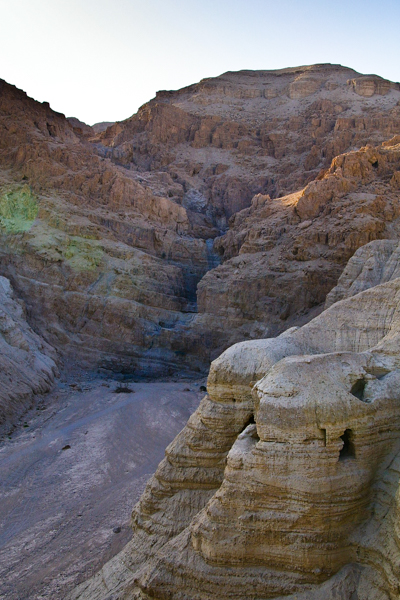 Our final stop on this day was at Qumran, the location of the Essene (maybe) settlement and the place where the Dead Sea scrolls were discovered.

As usual along the Dead Sea, except at a few areas like Ein Gedi, the land was exceptionally desolate. The scrolls were discovered by a Bedouin shepherd. It is amazing that the animals could find enough to eat that the herder was even in this area! One of the caves can be seen in the rock outcropping.

As can be seen from the discoloration of the rocks, on occasion there is water flowing down this wadi.

There are also extensive excavations at the settlement. As with most places in Israel, it is not without controversy.

You may click your "back" button to return to the index page.