Jerusalem must be the the most politicized place on the planet. Sacred to three major religions, set aside secular claims, every inch is contested. On any given spot there are competing views of what has been, what is, and what should be. There is no space in this brief overview to discuss all that we learned during our trip. I have attempted to find more-or-less unbiased sources (a vain hope!) for those interested in more information. Be aware that for each of these sources there are likely to be contradictory ones.

Likewise there isn't enough space for all the pictures. These are just my favorites. We spent an entire week in Jerusalem and it wasn't enough time. Another week for the rest of Israel didn't give us enough time there either. My advice to travelers who are considering a visit: forget the Dead Sea and spend your precious time elsewhere.

Our tour, which was organized by Elderhostel, wasn't a typical "holy land" trip. The in-country travel leaders were from an orthodox Jewish outfit named Keshet, the Hebrew for "rainbow." The primary focus was history and archaeology with a liberal helping of politics.

We were collected at Ben Gurion airport for the transfer to Jerusalem, where we spent our first week. The first stop was at an overlook of the city in the dusk. 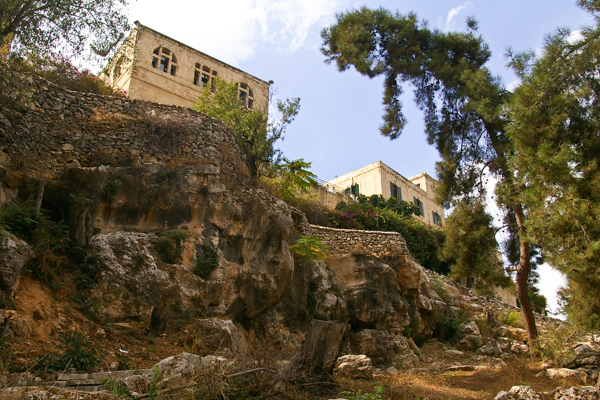 Our hotel in Jerusalem was the Mt. Zion. It is on a rocky eminence overlooking the Hinnom valley, once a place of grisly sacrifice, but now a lovely park.

The building, a former eye hospital, had been one terminus of a cable car that supplied Jewish forces during the early partition battles of 1947.

And... the food and wine were outstanding! 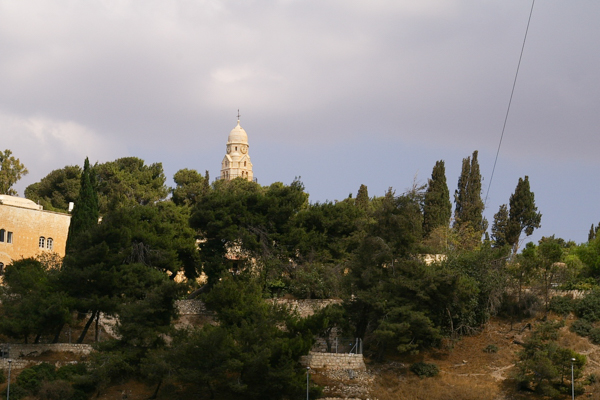 The cable for the cable car can be seen to the right of the image. When it was in operation, it was lowered at night to prevent detection. 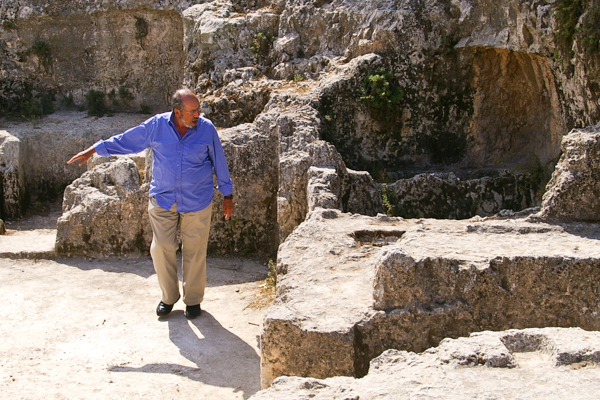 Within a couple of blocks of the hotel, Dr. Gabriel Barkay found the oldest extant Biblical text at "Ketef Hinnom." Dr. Barkay  told us how it happened.

The discovery, a result of serendipity, was in this cemetery from the first temple period. He also described the recent destruction of archeologically significant areas of the temple mount and the project underway to salvage artifacts even though they had lost their context by the removal and dumping. 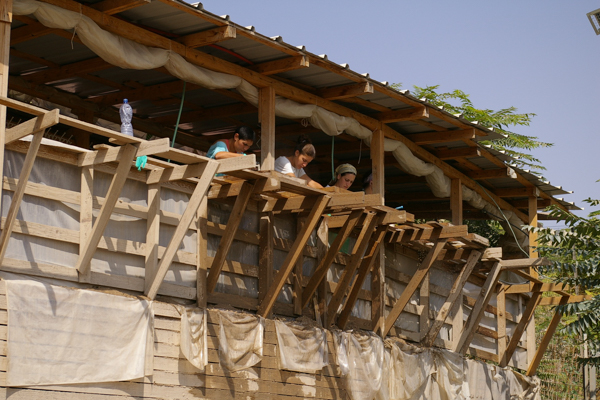 Our next stop was the City of David, perhaps the oldest part of the city

The site of Solomon's temple and the later Herod's temple is now occupied by the Dome of the Rock.

Highlights of this picture include the western wall of Herod's temple compound (lower area obscured by the covered walkway), the golden dome, the temporary covered walkway providing access to the temple plaza, and the dark tent-like covers of a "rescue dig" initiated after the failure of an earlier access ramp. Like everything else in this place it was controversial. The result of charges and counter charges is that the "temporary" walkway is still in place as of 2021 and remains the only access to the Temple Mount for non-Muslims.

The Mount of Olives from the Temple Mount.

The highest point is the traditional location of the ascension of Jesus.

Just to the right of the picture is the beginning of a huge field of cemeteries in the Kidron valley. This is a favored place to be buried because it is believed to be ground zero for the coming "Day of the Lord."

We visited the traditional site of the Garden of Gethsemane at the base of the Mount of Olives.

Tradition holds that some of the trees were living when Jesus went there to pray. Maybe. This specimen certainly looks ancient. Olive trees regenerate from their roots, so perhaps there is some part of the genetics that has survived through the millennia.

Most of the trees in this orchard were much younger looking.

The domes in the background are part of the Church of All Nations.

Although we did not walk the Via Dolorosa as such, we did travel partway to the Church of the Holy Sepulcher along what would have been the Roman Cardo Maximus, which is part of (one of) the traditional route(s). It is now a bustling market. Another section of this street has been excavated back to the Byzantine level, but we did not see that part.

Most of the vendors in this section are Palestinian and I heard more than one cry of "Jerusalem is the capital of the Palestinian state."

Our approach to the church was roundabout. We traveled over the roof and through an Ethiopian chapel before arriving at the plaza. Which sect has jurisdiction over what location is strictly defined and often contentious.

According to tradition both the place of crucifixion and the place of burial, and resurrection, are within the Church of the Holy Sepulchre.

Lest we think that inter-religion squabbles are only between, say, Muslim and Jew, there are multiple on-going controversies over who has authority over what.

One pertains to the Deir al Sultan Monastery on top of the building on the right and through which we passed to the courtyard.

Controversies even extend to the ownership of the ladder seen under the right-most upper window. 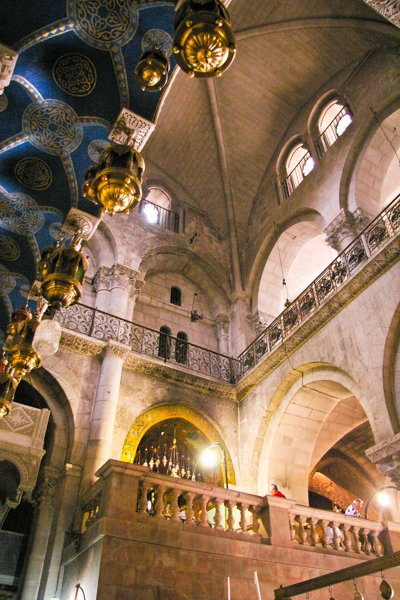 This being Jerusalem, however, there are those who do not accept the traditional location of the crucifixion and burial – or anything else.

We visited an alternate contender, The Garden Tomb, which first began to be considered as the "true" location in the mid-19th century.

It was just as crowded, but had the advantage of being in the open air. By the time we got here we were frankly getting a bit jaded about competing claims of this and that. 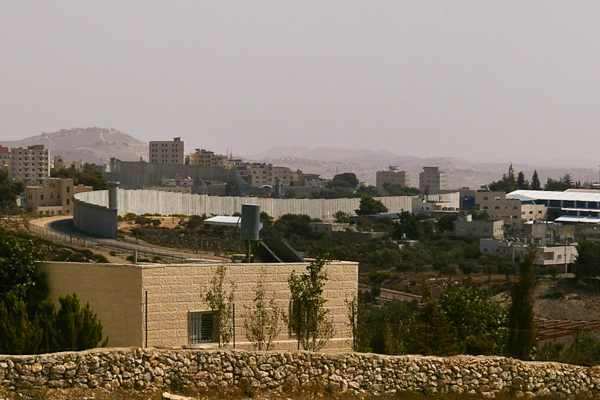 Our tour of the modern city stopped at a point that overlooked Palestinian-controlled Bethlehem. The security wall shown here disrupts travel between Bethlehem and Jerusalem. The concrete portion of the wall in the center of the picture continues with a chain-link fence.

The wall has been effective in controlling suicide bombers, but it has caused great hardship for Palestinians who are cut off from their jobs or farms.

It took some searching, but I eventually found a relatively even-handed discussion of the barrier. In the years since, that site has (of course?) vanished. In 2018 Haaretz published a retrospective that presents both sides.

On a happier note we then traveled to a huge open-air market. This was Friday morning so business was brisk as folks did their pre-Sabbath shopping.

Everything was spotless and there were numerous stalls where we could buy lunch. Yum!

We visited the Israel Museum, but much of it was closed for renovations. We were able to visit the Shrine of the Book where the Dead Sea scrolls are stored and are being analyzed. Everything is controversial in this troubled land, and the status of these scrolls is no exception.

Scroll fragments that appeared in the antiquities market after 2002 have been proven forgeries, which cast doubt on all the scrolls. Those held here are deemed authentic because of the provenance.

There was also a fabulous scale model of Jerusalem just prior to the Roman destruction.

On Friday afternoon we welcomed the Jewish Sabbath at the western wall. This picture was taken earlier in the week (cameras were not allowed for the Sabbath celebration) and doesn't give even a hint of the Sabbath crowds.

If you ever visit Jerusalem DO NOT MISS this unique time of celebration and worship! One of the high points was the arrival of the local yeshiva students ... dancing in a conga line. 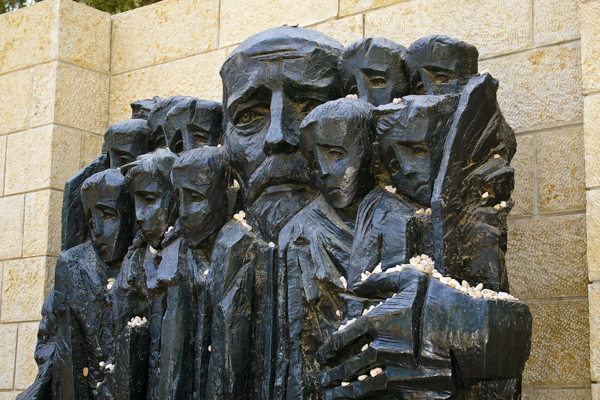 The next day we visited Yad Vashem, the memorial to the Holocaust. It was a sobering and moving experience throughout, but the part that touched me the most was the section dedicated to children.

The Children's Memorial was breathtaking. Candles reflected infinitely with changing images of the faces of the children who had been lost in the death camps.

Janusz Korczak gave his life to stay with his students in Warsaw. The small stones are placed as tributes in accord with a common Jewish mourning custom.

On Sunday several of us decided to attend services at St. Andrew's Scottish Church, which was very close to our hotel. (In the banner image at the link, the church is on the right of the picture and our hotel is in the center.)

I was not able to get a good picture of the entire church, so this cornerstone will have to do. At the time we were there, most of the congregation was Palestinian and many of those were emigrating.