In the last half of the 19th century, the Dean of Christ Church College and Cathedral was Henry Liddell. He and his wife raised eight children. One was Alice Liddell. The stories collected as Alice's Adventures in Wonderland were created by the Christ Church tutor, Charles Dodgson, for Alice and her siblings. Dodgson's office overlooked the deanery garden so he could see the children at play. They became acquainted through his photography hobby. Many of the images in the Wonderland stories were based on people and places that Dodgson actually knew. Our last day in Oxford was spent visiting sites associated with Alice. 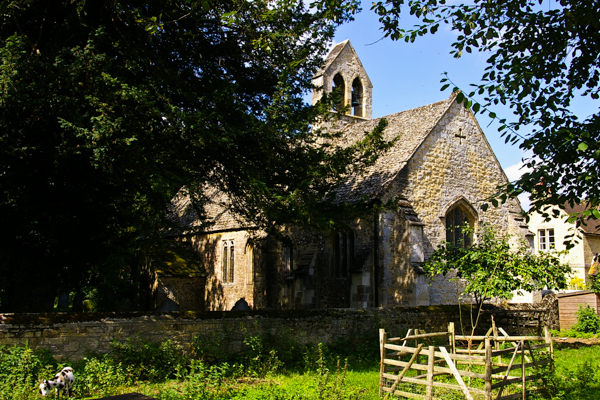 Our first stop was St. Margaret's church in Binsey. The current church was built in the same location of an earlier Saxon church associated with the nearby St. Margaret's well. 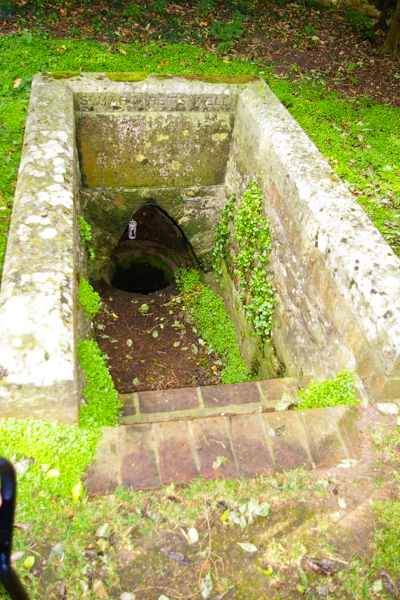 According to legend, St. Frideswide, the daughter of a Christian king, was pursued by a prince who wished to marry her. She fled to Binsey where she received shelter. Later the prince found out her hiding place and pursued her again. He was struck blind for his presumption, but she prayed to St. Margaret to heal his sight and this spring miraculously appeared. After bathing his eyes, his sight was restored and he abandoned his pursuit.

The spring became known as the treacle well. In medieval times "treacle" was a healing potion rather than the sugary syrup that we know today. Dodgson wove the treacle well into the story told by the Dormouse at the Mad Hatter's Tea Party.

Christopher had brought along scripts and "costumes" for a reading of the Dormouse's tale. I got to play the part of Alice with the rest of this accomplished cast.

The original plan had been for us to have lunch at The Perch in Binsey, but it had recently burned and was closed for restoration.

Plan B was to walk along the Thames path to The Trout in Wolvercote for lunch.

The path took us along the Thames opposite Wolvercote Common. The ownership of this bit of open space has been disputed for centuries between the Oxford Freemen and the residents of the village of Wolvercote.

The narrow riverboats are available for hire to travel the small rivers and canals of England. That's on the to-do list for some day.

Unfortunately Plan B didn't pan out either. This gorgeous summer Saturday drew quite a crowd to The Trout so we scattered to the four winds for lunch. Jim and I took the city bus back to Oxford.

We had lunch at the pub that had been the gathering place of the Inklings, a literary discussion group that included J.R.R. Tolkien and C. S. Lewis.

The odd name of the pub, nicknamed "the bird and baby," comes from a story associated with the Earls of Darby. In the story, one of their ancestors had an illegitimate son. He directed that the baby boy be placed beneath a tree where there was an eagle's nest. When he walked past the tree with his unsuspecting wife he pointed out the child and suggested that they adopt him. Apparently there was a folk superstition that eagles would occasionally rescue children in danger, but I've not been able to verify this.

In the afternoon we reconvened for a guided tour of Christ Church College. The main gate is surmounted by Tom Tower named for the bell Great Tom.

Christ Church was founded as Cardinal's College by Cardinal Wolsey in 1524. It was located at the site of St. Frideswide's Monastery, which dated from the 9th century and was suppressed to fund the college. When Wolsey fell out of favor, King Henry VIII re-founded the college in 1546. He also designated the old monastery church as a cathedral.

One of the "behind the scenes" sights was the Fellows' Garden. The buildings in the background belong to Merton College.

On the other side of the wall is a path known as Dead Man's Walk. It was the ancient path taken by Jews between their community and their cemetery located on the other side of Christ Church Meadow. They weren't permitted to enter the city and had to take a round-about way.

Jews were expelled from Oxford in the 13th century and only began to return in the 17th century. 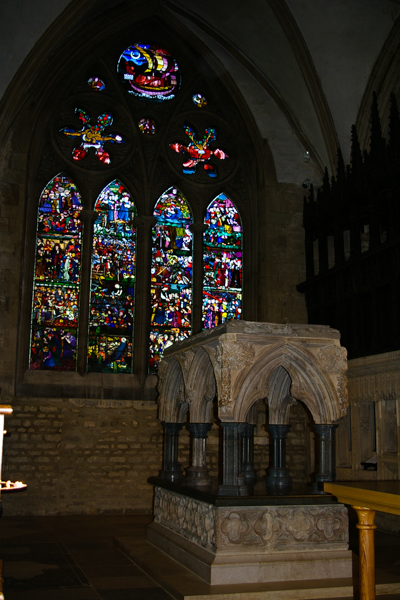 This 13th century shrine that once contained St. Frideswide's bones was destroyed during the Reformation, but has been found and reconstructed. (The bones, however, were lost.) The stained glass windows tell the legend of her life as described above.

We were told an interesting story about the dark screen seen to the right. Early pilgrims would leave offerings at the shrine. Monks sat behind the screen to make sure that subsequent pilgrims didn't filch the offerings.

This 14th century stained glass image of the murder of Thomas Becket was saved from the ravages of Henry VIII in his rejection of the Roman Catholic church. A quick-thinking cleric removed the face and replaced it with plain glass. When Henry's minions asked if there were any images of Becket, the cleric could truthfully reply that there were not.

It is easy to condemn other cultures or religions for their destruction of ancient or holy artifacts, the dynamiting of the Bamiyan Buddhas (link opens in new window) comes to mind, but we are all guilty. 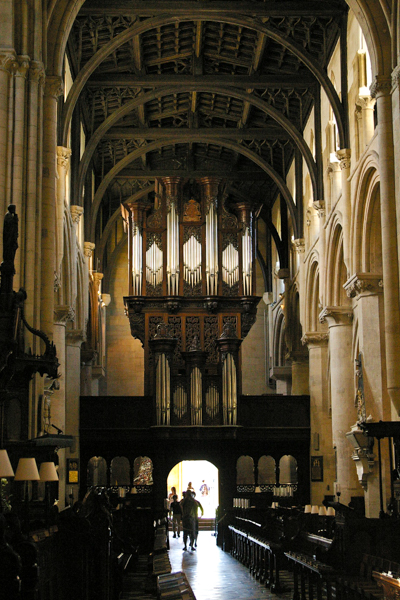 This is the smallest cathedral in England. Nevertheless it is quite impressive. Part of the afternoon's program was to be a sung Evensong service, but the scheduled visiting choir cancelled. In all of our two weeks of travel together it was the only thing that managed to upset Christopher.

In a subsequent visit to Oxford two years later Jim and I made a point to attend Evensong. It was indeed worth the wait.

There is a bulletin board in the cathedral where people can leave prayer requests. In addition to the intercession requested for individuals I was interested in the two Arabic requests – one for world peace. Amen! 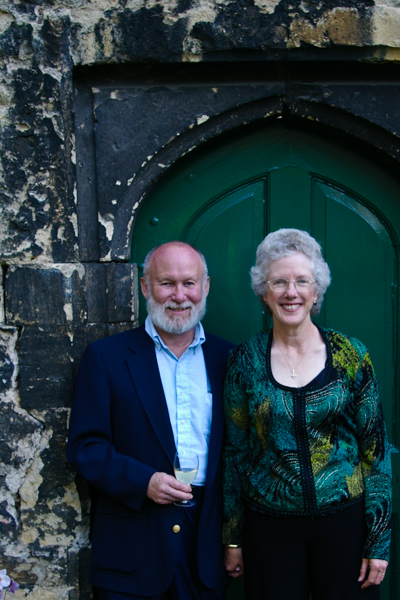 After our tour we had cocktails in the Deanery followed by a farewell dinner in the Senior Common Room. This door, between the Deanery garden and the Fellow's Garden, is believe to have inspired the little door behind the curtain that led into Wonderland.

We enjoyed this program very much and were sorry to bid goodbye to Oxford, our leaders and companions. We made the determination to return to Oxford since there was so much more to see. Since then we've been back twice and still want to see more.

After leaving Oxford, we traveled to Heathrow with the group, but instead of flying home, we rented a car for an additional week in England on our own.

Click your "back" button to continue on our journey.