Our first three days in Oxford were divided among the major world religions of Christianity, Islam, Hinduism and Buddhism. The last day was devoted to Wonderland. 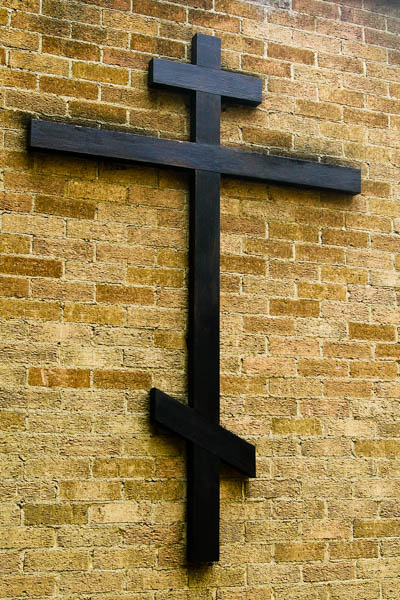 The Orthodox Church facility is shared by Greek and Russian Orthodox congregations. Services may be held partly in English, partly in Greek and partly in Slavonic or other languages.

We were met at the church by Bishop Basil Osborne who discussed the layout of the sanctuary and its symbolism, the liturgy, and the history of Orthodox immigration and its effects. Lest we think that church conflict is a thing of the past, Bishop Basil, since retired, had been in the midst of a bitter controversy over the function and future of Russian Orthodoxy in the United Kingdom. There have been similar controversies in this country.

Two things struck me most in the physical layout of the church interior. The first was the lack of chairs. Worshipers stand during the services, although there are a few chairs for those who are unable to stand. The other is the iconostasis or icon screen, which separates the altar from the worshipers. The priests withdraw behind this screen for certain portions of the service. Click to see the symbolism of this screen. 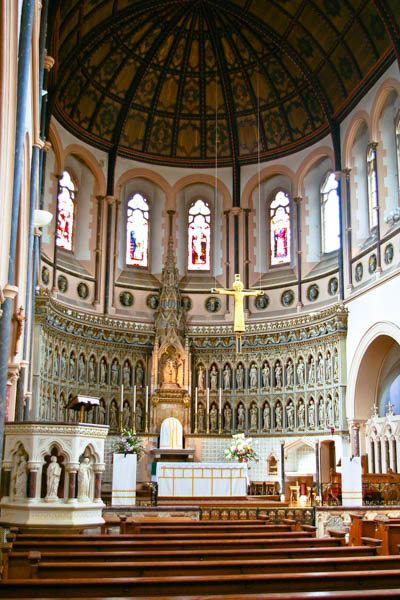 From the Orthodox church we walked to St. Aloysius Roman Catholic Church. I don't remember the history of the building, e.g., when it was built or by whom. I don't believe it was very old, but it was quite lovely inside. 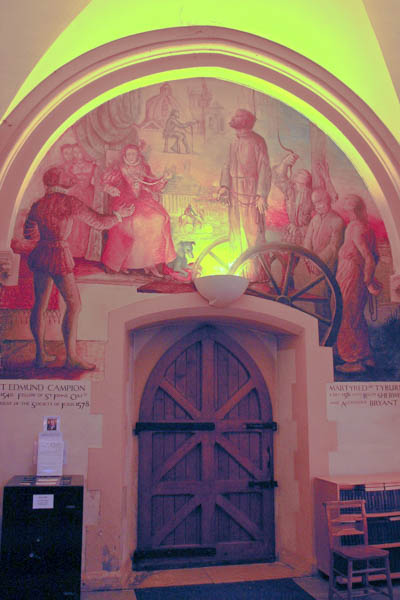 Some in the US don't understand the potential injustice of a state that has an established religion. Even once life and limb were no longer at risk, nonconformism was a serious civil handicap in post-Reformation England well into the 19th century.

Our next stop was Keble (pronounced KEY-bul) College where we visited the chapel, shown here. It is a relatively new college, founded in 1870 by individuals who sought to recover the Catholic heritage of the Church of England. They were part of what was known as the Oxford Movement.

As Christopher said, you either have to love or hate the polychrome architecture. It's hard to ignore it!

The college is no longer affiliated with the Church of England. 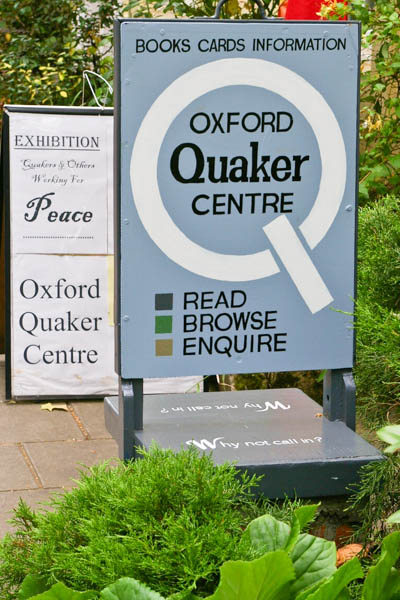 After the opulence of Keble, we attended a Quaker meeting. Quaker worship does not follow a liturgy like most other Christian denominations nor is it led by clergy.

The Quakers trace their origin to George Fox who, in the 17th century, began to seek a more meaningful worship than he had seen in the contemporary Church of England.

The service was very peaceful and spiritual – a much-needed respite from the various martyrdoms and conflicts.

After the service Jim & I scurried away to do some errands. We were dismayed to find out later that the Quakers had hoped that our group would stay for discussion and refreshments after the meeting. It would have been a great opportunity to learn more. 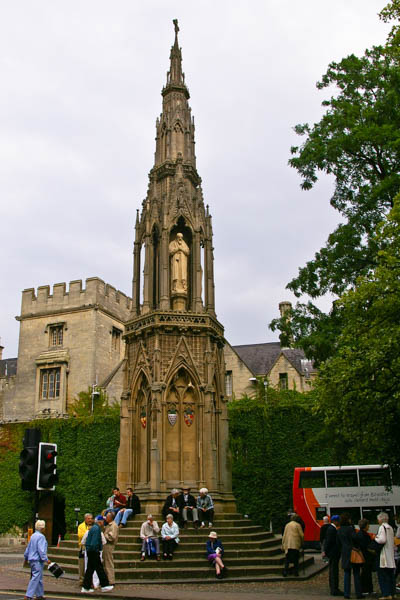 After a respite from martyrdom, we met at the Martyr's Memorial opposite the Ashmolean Museum. It commemorates three Anglican bishops who were condemned by Queen Mary Tudor.

The actual memorial wasn't built until the 19th century in reaction to the Oxford Movement mentioned above.

After our day visiting Christian sites within Oxford, we attended an outdoor performance of Oxford Passion, an updated medieval mystery play offered at the Oxford Castle. It was delightful in spite of light drizzle. 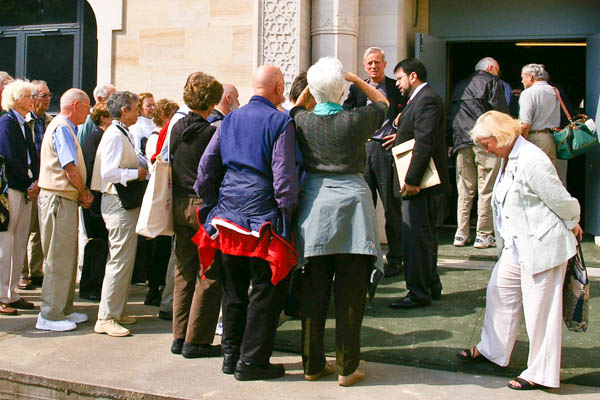 The next morning started with a lecture on Islam with Dr. Hassan Abedin, a fellow of the Oxford Centre of Islamic Studies (OCIS), shown here in the black suit. His discussion covered political aspects of Islam as well as the history and culture. (We had been given extensive reading lists ahead of time, so we were expected to be familiar with the basic beliefs.)

Dr. Abedin suggested that many problems in the Muslim world are not caused by too MUCH Islam, but too LITTLE Islam. There are many so-called religious leaders who actually know little about the true message of Islam. 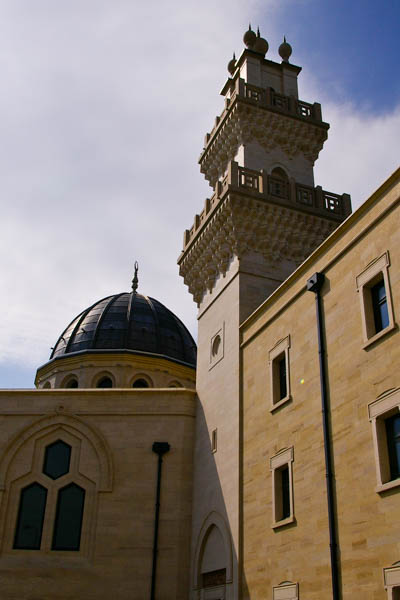 The new building designed to hold the OCIS was still under construction when we visited in 2007. It was being built with traditional construction techniques using materials provided from all the countries with a substantial Islamic population. The bones of the building were very beautiful. I would love to see it finished.

The Centre and Dr. Abedin have both become somewhat controversial in the time since we visited. The information in the "blog-o-sphere" seems a tad paranoid, to say the least, and there have been accusations of "infiltration" and such-like.

Dr. Abedin is currently (2021) an associate editor of the Journal of Muslim Minority Affairs. 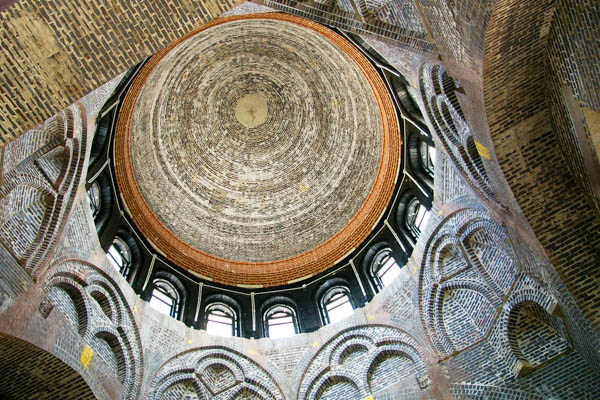 The interior of the dome in what will be the mosque attached to the Centre shows its construction details. This is a fabulous piece of design and construction.

After our visit to the Centre, we were joined by scholar and author Peggy Morgan for lunch in the Aziz Restaurant in this colorful row of storefronts. Peggy's book Ethical Issues in Six Religious Traditions was on our pre-trip reading list.

The Central Oxford Mosque Society is building this facility on Manzil Way in Oxford. This is a Sufi congregation. The International Association of Sufism gives this overview of the origins of the Sufi tradition. Not all Muslims view Sufism as authentic believing it to be too much influenced by outside forces and other religions.

We were told that the Saudis had offered a considerable sum of money toward the building of this mosque, but the community has refused it because, as the imam said, such money usually comes with an attempt to influence the style of worship and other belief practices toward the more conservative Wahhabi tradition.

(Finding even-handed WWW links to describe some of the terms and beliefs in greater details has been an overwhelming task. I give up.) 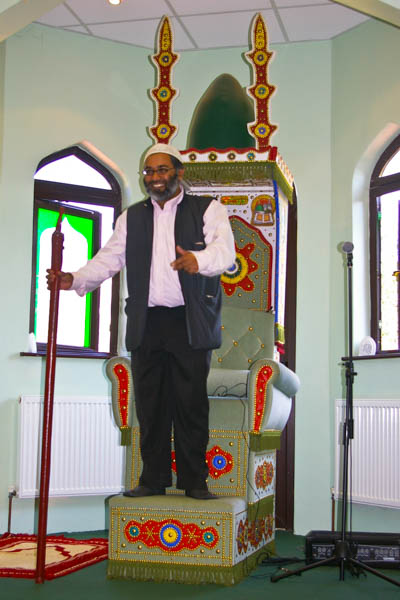 One of the imams of this mosque, Manowar Hussain (link opens in new tab), gave a presentation on life and worship of the Oxford Muslim community. He spoke of technological innovations that they had planned or made including the ability to bring services to individual homes via closed circuit TV.

The imam sits on the "throne" while teaching. I have forgotten the significance of the staff. This niche indicates the direction of Mecca.

Since we were there, the mosque has gotten into a controversy with the local community about the possibility of broadcasting the Muslim call to prayer. I haven't been able to find any info on the resolution.

Ladies were advised to wear conservative clothing (long skirts, long sleeves and scarves for head coverings) while visiting the mosque.

The next morning we visited the Oxford Centre for Hindu Studies where we had a discussion on Hinduism with Saunaka Rishi Das, pictured here. Imagine our astonishment to find the local Hindu priest to be a native Irishman!

Rishi Das described Hinduism as either a religion with many gods or a religion with many manifestations of one god. There are many ancient texts, the Vedas, but no one consistent set of "scripture" such as Christianity and Islam have. The Bhagavad Gita, the most widely known, is the discussion between Krishna, as charioteer, and Arjuna just before a war. It is relatively late, perhaps 500-200BC. Other Vedas have been dated as early as 2000BC although the dating is controversial. 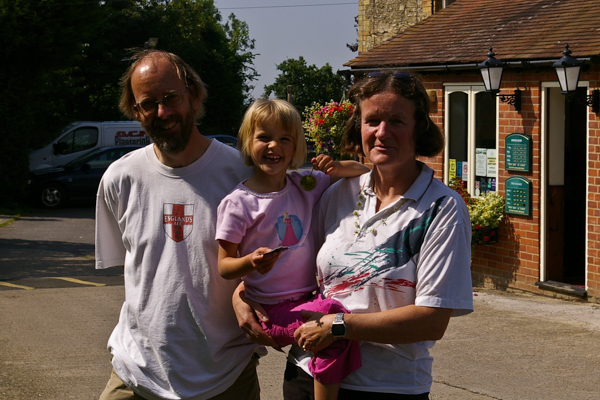 Jim and I snuck away from the group for lunch with Deborah Evelyn, a colleague from my working days at Tandem Computers, and her family. Deborah picked us up and drove us to a lovely pub in the country where we were joined by her husband Martin and daughter Meredy. 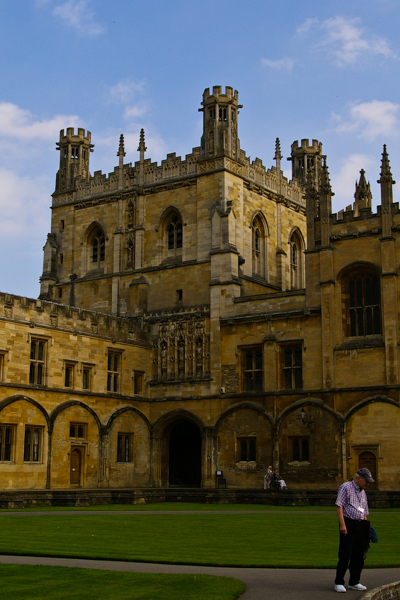 After lunch we gathered at Christ Church College Deanery for a discussion of Buddhism with the Venerable Dhammasami, of the Oxford Centre for Buddhist Studies, and Peggy Morgan.

Buddhist teaching associates the cycle of life as rebirth into a suffering existence. The goal is to achieve enlightenment, which will free the spirit from this cycle. The Venerable Dhammasami characterized one step of the movement toward enlightenment as a change in perception from "I hurt" to "there is this pain."

I hope that in subsequent programs they changed the timing of this segment. A philosophical discussion, after lunch, sitting around a warm fire did not receive my best attention!

For our final day in Oxford, we focused on a famous associate of Christ Church College, Charles Dodgson, better known as Lewis Carroll.