While in Gautier we focused on one neighborhood that had been devastated by the hurricane. We had hoped to work on three of the houses, but ended up only working only on two because of a lack of materials.

The residents of the neighborhood had focused their own rebuilding efforts on their church! 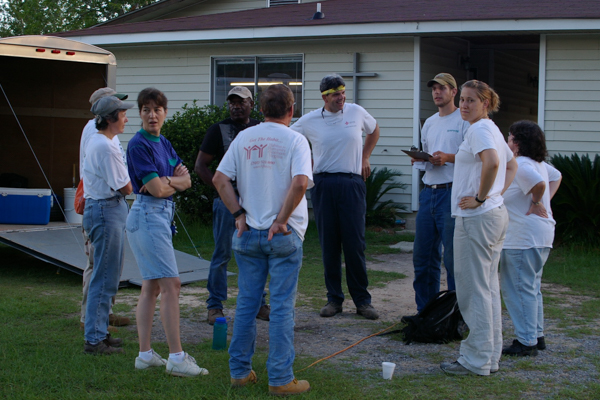 Every day started with a prayer and a discussion of work assignments.

Each day ended with a devotional. 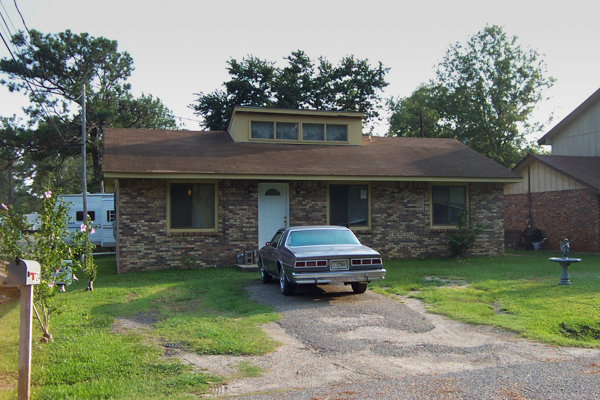 Unlike most rebuilding efforts where you work for a week, but then leave a lot of work for the next team, we were actually able to complete enough work on this house so that that family could return (although there were still some things that needed to be completed).

We worked primarily with the wife of the family, whom we affectionately called "Miss Ivy." Although we met her husband, I never did get his name.

The storm surge came within a foot or two of the ceiling of this house.

Right before the hurricane, the owners had done some extensive remodeling that included the kitchen. These cabinets were custom built and very good quality. They actually came through the storm pretty well, but the hardware had suffered greatly from the salt water. Opening a cabinet door resulted in a sound reminiscent of The Fall of the House of Usher!

Rather than replace the cabinets, we simply refinished them and replaced the hardware. They came out almost as good as new.

Although the floor looks like parquet, it is ceramic tile. Miss Ivy said that she wanted something that might stand a chance against another hurricane! 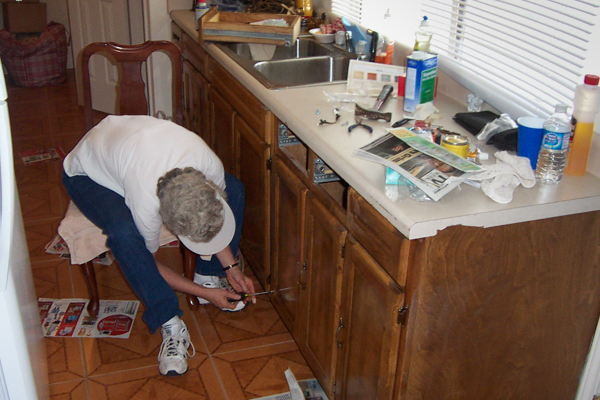 Here I am sitting down on the job! 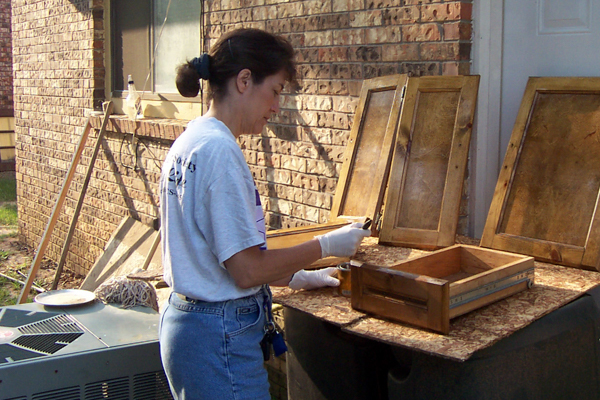 Susan Cheney was in charge of refinishing the cabinets and some of the woodwork in the living room.

Susan's son Ryan had been on the April Katrina rebuilding trip. He wasn't able to come this time, so she decided to see what it was all about. 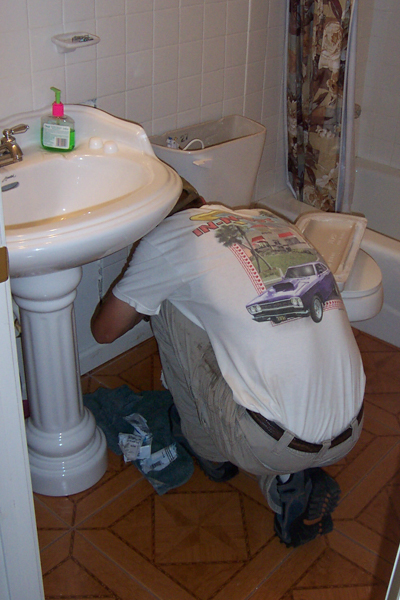 One of the requirements to get the family back into their house was having a working toilet. It was therefore a major focus of our work here this week. Aaron Gordon is hooking up the plumbing in this picture.

The toilet drain pipe had been cracked, which complicated the situation somewhat. 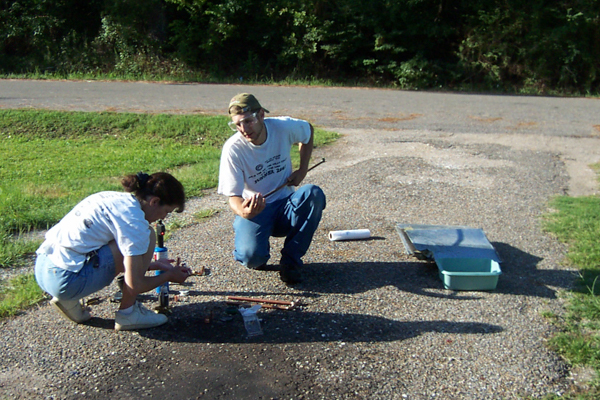 Aaron even started teaching Susan how to sweat joints. 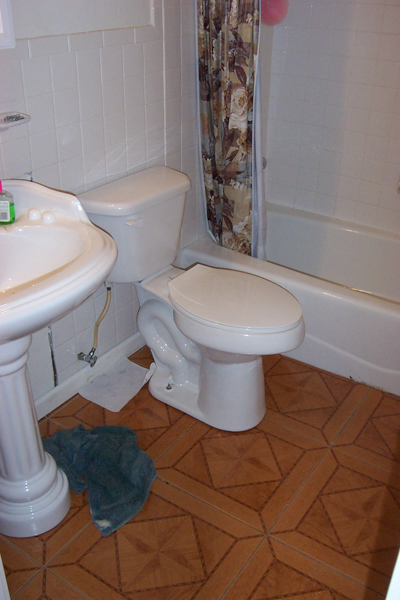 The toilet is now functional.

The paper towel under the water line is there to check for leaks. There weren't any. 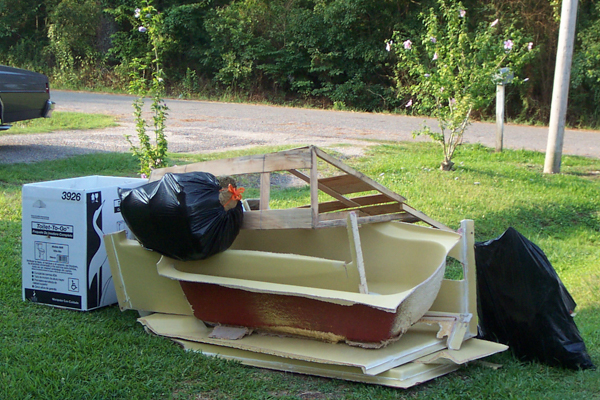 Although we now had one working bathroom, there was another bathroom that needed addressing.

The first step was removing the old tub and shower paneling. 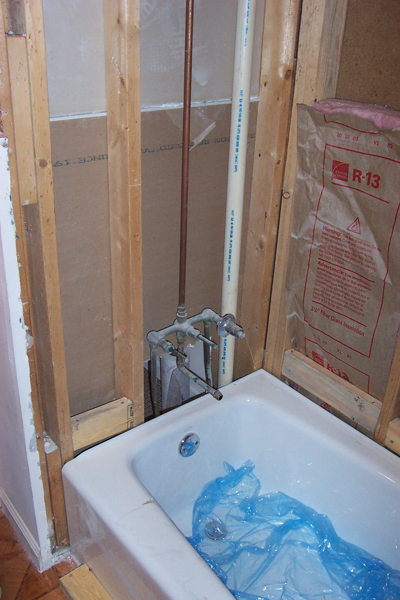 The next step was installing the new tub. This turned out to be rather harder than expected. The tub went in (eventually), but the plumbing turned out to be a challenge. This was the lowest line in the house and an elusive leak resulted in all the water seeking that lowest point! 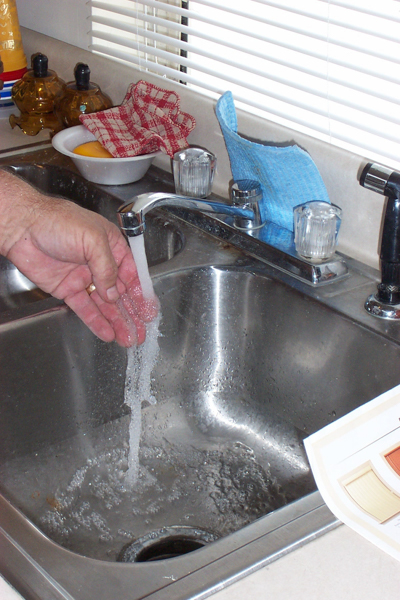 Until we could find and fix the leak, we couldn't turn on the water anywhere. Eventually we did get it fixed and we could get the water flowing.

We were unable to complete work on the second bathroom, but the fact that there was one functioning bathroom in the house made it possible for Miss Ivy and her family to bid goodbye to the FEMA trailer where they had lived for many months. 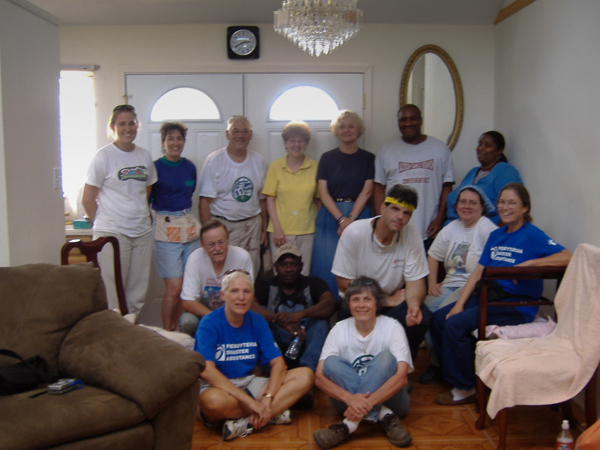 We had a great celebration to bless the house prior to the family returning. 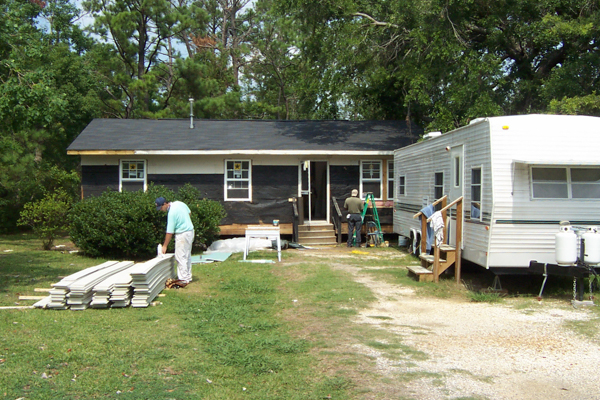 Miss Ivy's house was not the only one that the CPC group worked on, however. This house was owned by Mrs. Williams. One of the tasks was replacing the siding. 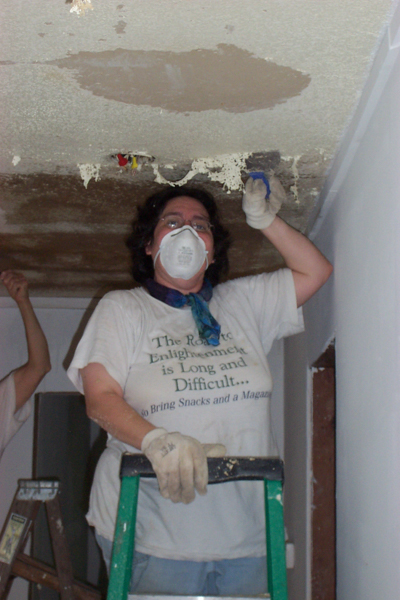 Another was removing the asbestos-laden "popcorn" finish from the interior ceilings and repairing where necessary: 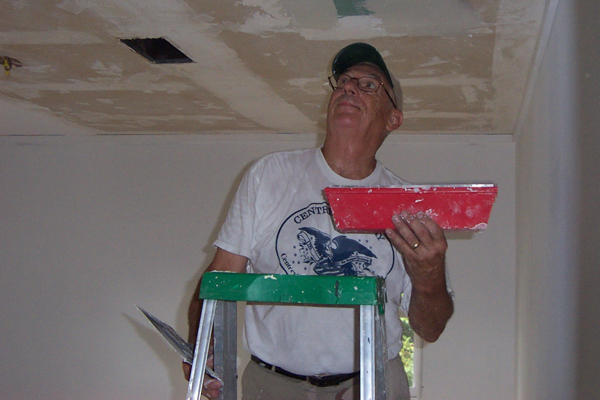 "Hammer Bob" Hartman was so nick-named to distinguish him from another member of the church: "Miracle Bob" Hartman. Sadly they have both since passed away and are much missed on this side of the Jordan. 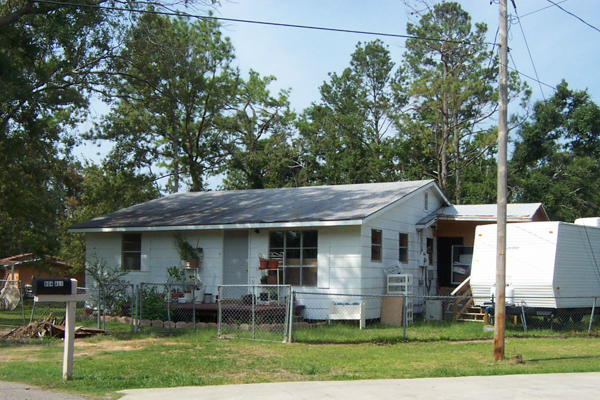 A third house in the neighborhood was "haunted" by a raccoon family. The only work we were able to do there was determine for sure where the raccoons had taken up residence (answer: in the crawl space rather than the attic) and measure the house for latticework that would keep them out once evicted.

We originally called the raccoon Rocky, but later decided that Rockette would be more appropriate.