I hitched a ride to the Mobile airport with some of the folks who were flying back to Northern Virginia at the end of our week. From there I could catch a taxi to my hotel downtown. I had already been in touch with some genealogy resources in Mobile so I had selected a convenient hotel that would enable me to visit them either by walking or on public transportation.

My genealogy pursuits are of interest to no one but myself (and maybe a couple of cousins), but Mobile was a pretty city so I thought I'd include some pictures of the downtown area.

My first day in Mobile was a Sunday and I started it at the church right across from my hotel. Government Street Presbyterian has a tradition of asking visitors to introduce themselves. There was a youth group visiting from Lexington, KY, in addition to myself. After the service one of the pastors introduced himself and was quite familiar with Lexington, VA. I seem to remember that he told me he had gone to school at W&L. 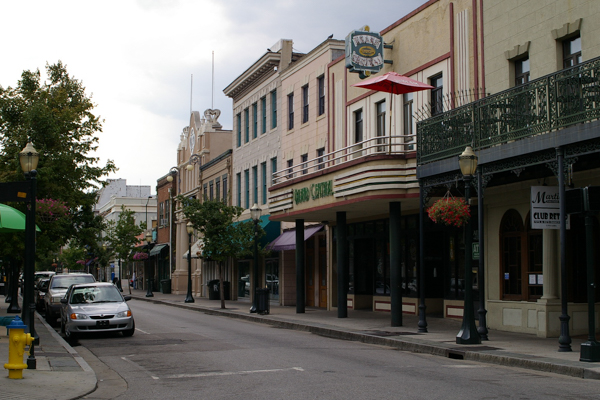 Dauphin Street is in the heart of old Downtown Mobile. It is a listed historic district. There were lots of shops and cafes, but I was there on a Sunday afternoon and things were pretty quiet.

Mobile has a famous Mardi Gras celebration and there was a carnival museum that looked interesting, but it wasn't open on Sunday, which was the only day I had to wander around. 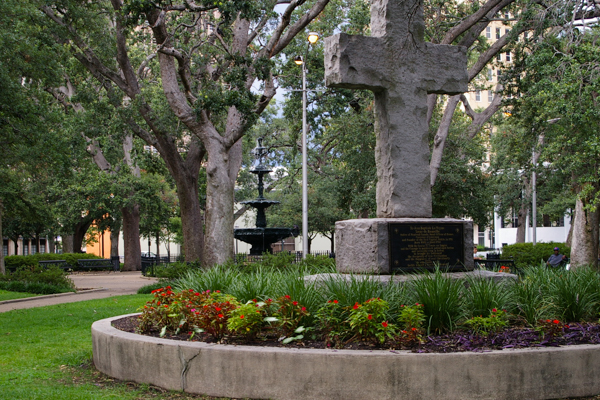 The Bienville Square park was a shady spot to relax on a Sunday afternoon. 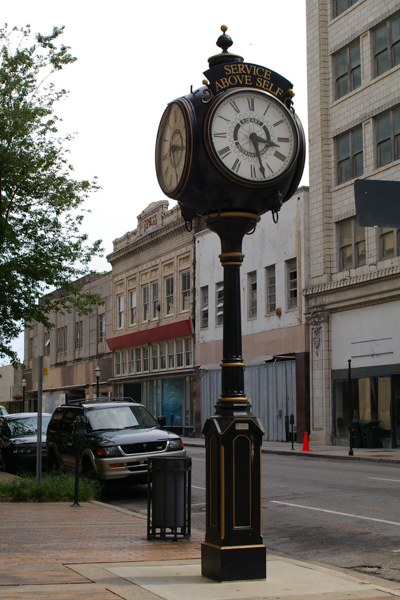 Since Jim is a Rotarian I never miss an opportunity to capture traces of Rotary. This clock with the "Service Above Self" motto was on Dauphin Street.

After a couple of frustrating days in Mobile libraries and government records offices, I was glad to hop on an airplane back home.

It was not, unfortunately, an uneventful trip. The "flaps" on our plane into Roanoke malfunctioned so we had to be rerouted to Greensboro, NC, which has a longer runway. From Greensboro we were put on a bus to Roanoke, where we arrived around 3AM. Thank heavens for cell phones so that I could keep in touch with Jim and arrange for a pickup. The airline itself proved pretty worthless in that regard.

In spite of those hiccups, it was great to be of service to the people of the Gulf Coast.