Our trip to Africa was made on a ferry from Algeciras to Tangier. This crosses the Mediterranean at its narrowest point, but the ride was rather longer than I had expected because Tangier is significantly west of Algeciras. (The closest African port to Algeciras is Ceuta, an autonomous Spanish city on the African coast almost directly south of Gibraltar.) The trip was sufficiently rough that I spent almost the entire time on deck to avoid sea-sickness. There's nothing like a cold stiff wind in the face to calm one's tummy. 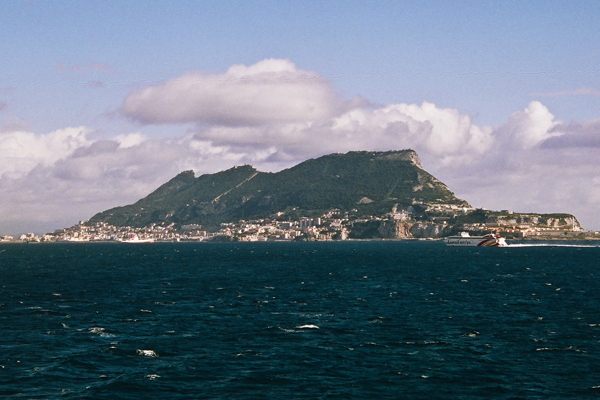 Our last sight of Europe was Gibraltar as we left the port. The white ship this side of the rock is a returning ferry similar to the one we were on. 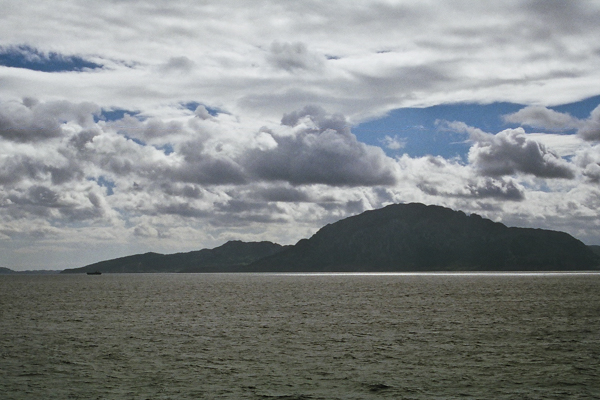 Gibraltar is undisputed as one of the Pillars of Hercules. The identity of the corresponding "pillar" on the African coast is disputed, but this may be one of the candidates. It was the highest mountain that I saw from the ferry. 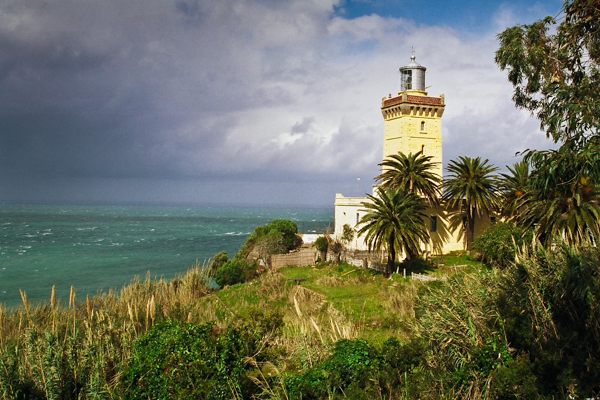 We arrived safely in the Tangier harbor and were met by Ismail, the guide who would accompany us for our time in Morocco. Our first sight-see was the Cap Spartel lighthouse, built in the mid-19th century. It overlooks the Atlantic Ocean. Glad we got into port before that looming storm came in!

While we were in Tangier, we had a walking tour of the casbah, the old fortified part of the city. Ismail told us that every old neighborhood had three essentials: a mosque, a bathhouse, and a communal oven. The mosque was to provide a place for daily prayer and worship. The other two were needed because individual houses usually lacked these amenities. We may have seen a bathhouse in this neighborhood. If so, I didn't get a picture of it.

This is the mosque. 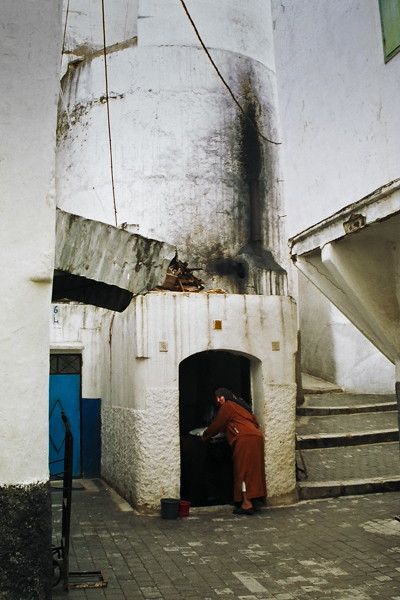 And this the oven. 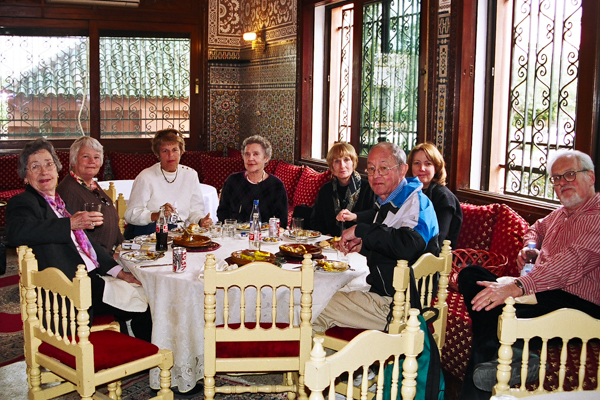 The next morning we departed Tangier for our trip to Fes (or Fez). We stopped at a restaurant for lunch and I took the opportunity to get pictures of our group (in three sections). I am just now getting these online after eight years and am sad to say that several of these dear friends are no longer with us. May we all remember to treasure each other while we can! 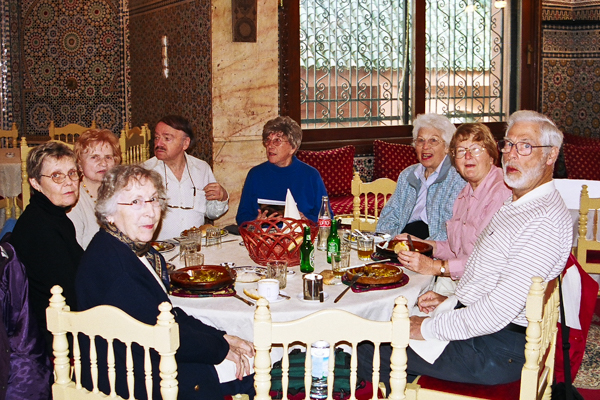 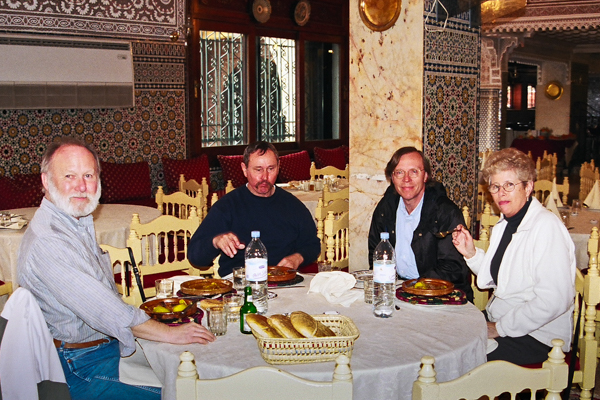 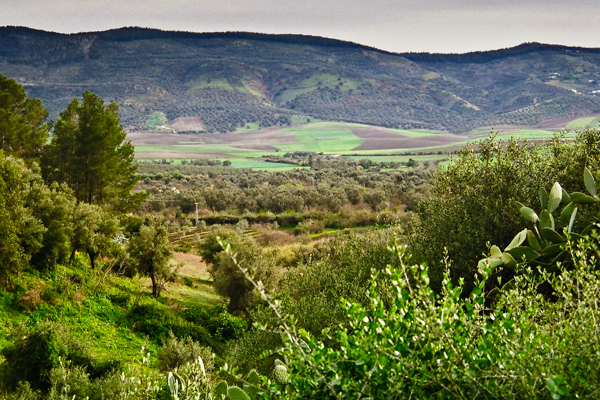 For no good reason I had an image of Morocco as being a barren sort of place. Although there are southern areas that are in the desert, the places that we visited were all quite lush and beautiful. This is the area surrounding the Roman city of Volubilis, which we visited. 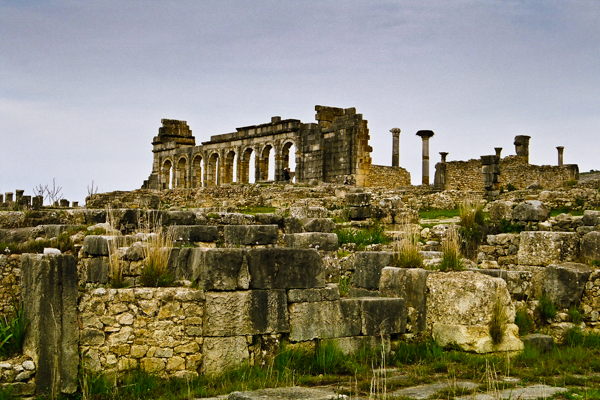 Volubilis is a World Heritage Site founded as early as the 3rd century BC and occupied until the 11th century AD. It was the western-most major Roman settlement. The ruins were well-preserved until the great earthquake of 1755 that destroyed Lisbon and affected a wide area of the western Meditteranean.

What appears to be a cap on the standing column to the right of center is in fact a stork's nest. 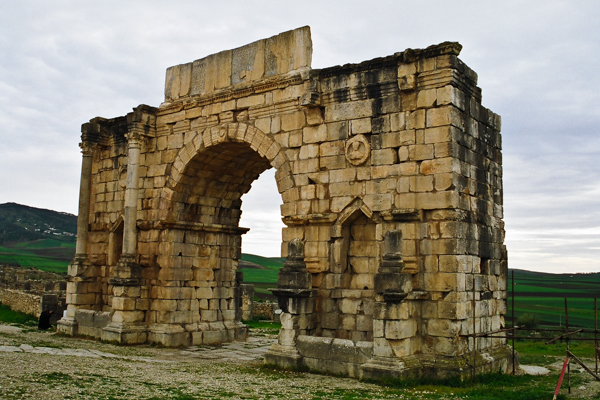 We were told that this triumphal arch was built in honor of the emperor Caligula, but I can't verify that using WWW sources. Hard to imagine anyone honoring Caligula unless they really had to! 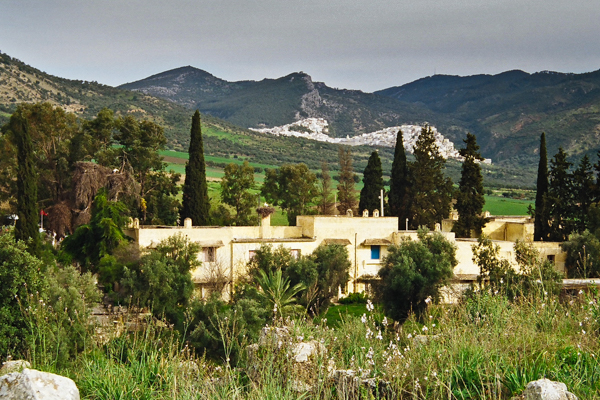 Near the site of Volubilis is the city of Moulay Idriss, which takes its name from the Muslim ruler who is buried there. It is seen here from Volubilis as the white town spread across the base of the mountains. At the time we visited, non-Muslims were not allowed to spend the night there and we were strictly limited as to where we could go. Apparently that restriction is being eased nowadays.

Ismail assured us that the Lisbon earthquake that caused so much damage elsewhere in the region didn't affect Moulay Idriss at all, which was proof positive of the holiness of the city. 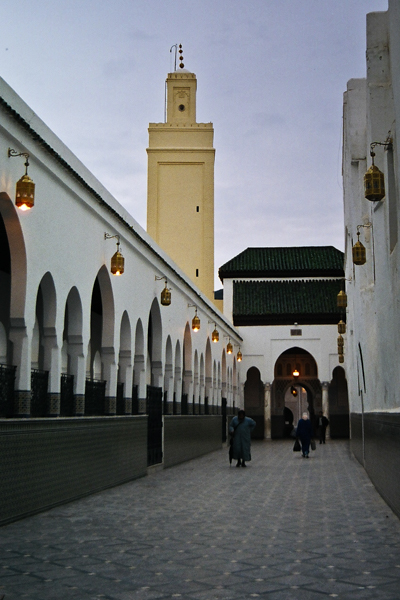 This is as close as we were able to get to the shrine within the city. As is evident, the day is waning and Ismail was hurrying us lest we violate the prohibition on non-Muslims. Some of the locals were giving us hard looks and we had no desire to tarry.

The mausoleum is behind the minaret.

Another historic city in the area that we did not visit is Meknes. We did stop on an overlook to see it before proceeding to Fes.

Click on your browser's "back" button to continue our tour.