Granada and the Alhambra

Granada is the capital of the province of Andalusia. The name means pomegranate. We were told that there are numerous pomegranate trees in the city and surrounding area, but since we were visiting in the winter we didn't see any flowers or fruits. The area where the city is located has been settled since Roman times, but it didn't become a major center until the construction of the Alhambra in the 13th century. 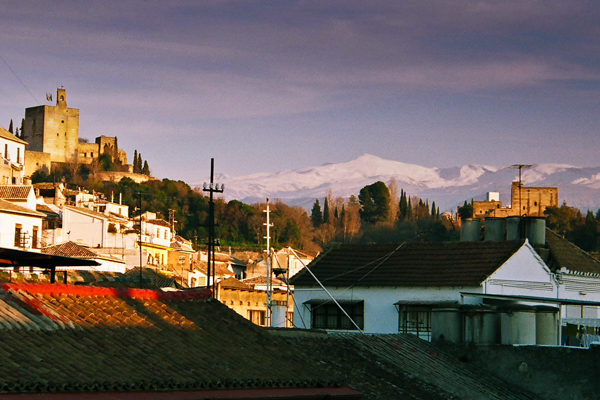 This is the view from our hotel window. The Alhambra can be seen crowning the hill on the left with the Sierra Nevada in the distance. The neighborhood between the hotel and the Alhambra is called the Albayzín and along with the Alhambra and the Generalife is a UNESCO World Heritage Site. We had a walking tour of it the next day. 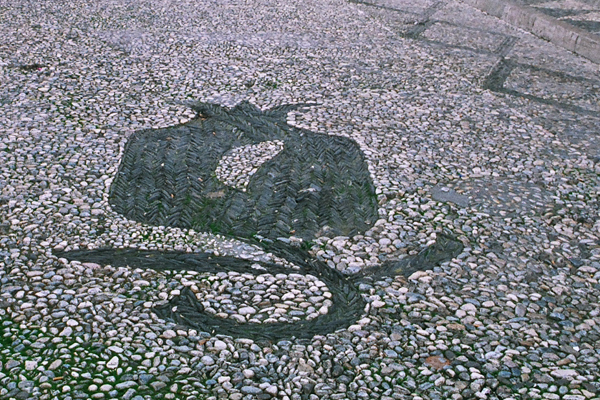 As noted above, Granada means pomegranate in Spanish and the symbol of the city is the pomegranate. We saw them everywhere – on street signs and here laid in the stones of the city streets. 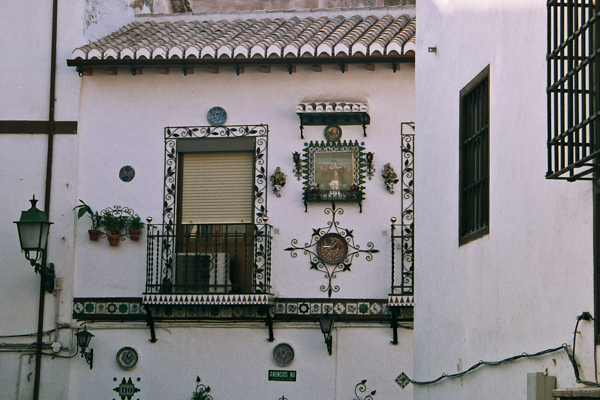 The houses in the the Albayzín tend to be modest and plain. This one was an exception with the elaborate decoration. How did they get it past the neighborhood architectural review board? 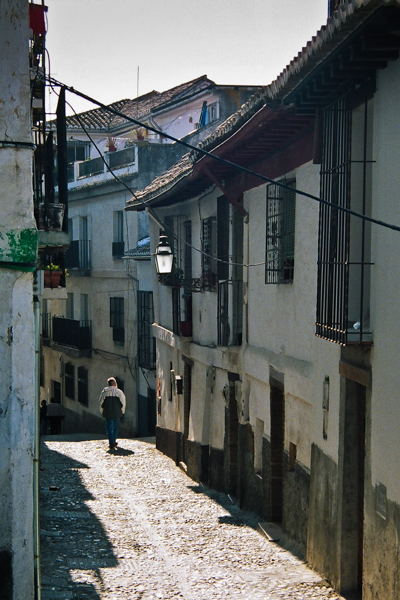 This is a more typical sight of the medieval neighborhood. The streets are steep and narrow with modest houses or apartments lining them.

One of the benefits of traveling in the winter is that tourist spots that are normally jam-packed are often very quiet. 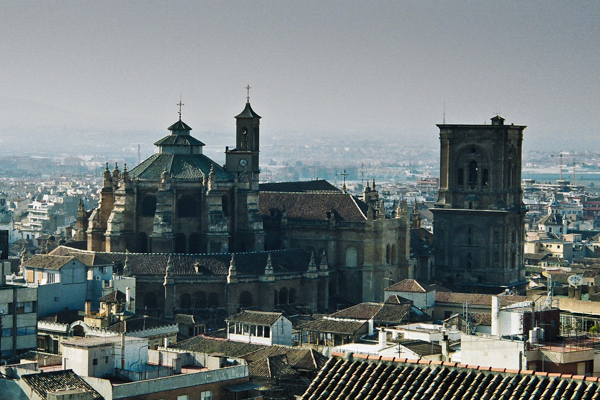 The Albayzín overlooks the modern city. The Granada cathedral, isn't exactly modern as it was built in the 16th century on the site of the much older mosque.

It adjoins the somewhat earlier Capilla Real, or royal chapel, the resting place of rulers Ferdinand and Isabel. We didn't visit the inside of the cathedral, but the chapel was very lovely inside and out.

Early in our stay at Granada we were saddened that one of our number fell in her room and broke an arm. The local hospital was able to treat it successfully, but she elected to return home to convalesce. 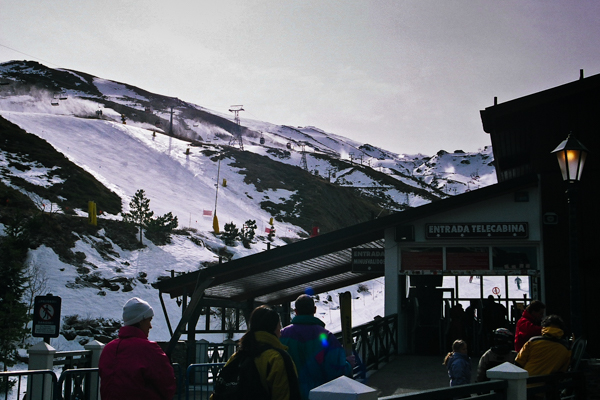 What is a ski trip without skiing? The bus ride to the ski resort was over an hour on twisty roads. When we got there, the snow cover was pretty marginal at the base. (It was better at the top, but I didn't take my camera up.) We had elected not to drag our skis all over Spain and Morocco, so we rented skis here. 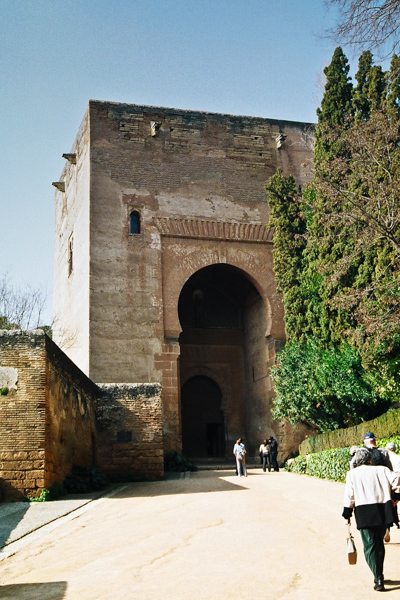 We spent the next day touring the Alhambra. It was so magnificent it was overwhelming. I was very thankful that we were there in winter because it would have been unbearable (for me, anyway, with my horror of crowds) in high season. Even so, there were certain sections where we had timed tickets since they try to manage the number of people present at any one time.

There is a hand carved on the keystone of the outer arch of the Gate of Justice and a key carved on the corresponding position of the inner arch, but there is no definitive interpretation of these symbols. 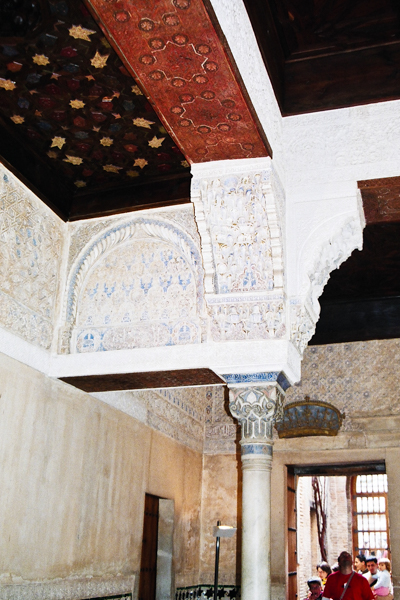 The Council of Ministers met and the sultan dispensed justice in the Mexuar. It is one of the older parts of the Alhambra, built in the 14th century, and has been much altered. For example, the ceiling was added in the 16th century when an upper floor was needed.

We now know that Greek and Roman marble sculptures were originally painted, and likewise much of the now-white decoration of the Alhambra was dramatically colored. Remnants of the coloring can be seen here. Serions sensory overload! 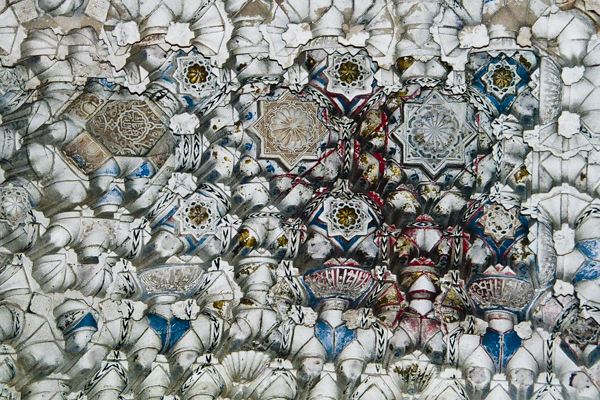 Here is a close-up of another area where some color remains. The intricate pattern of the relief is stunning in itself, but the delicate tracery of the coloring adds another layer. The time and talent that went into the construction was immense. 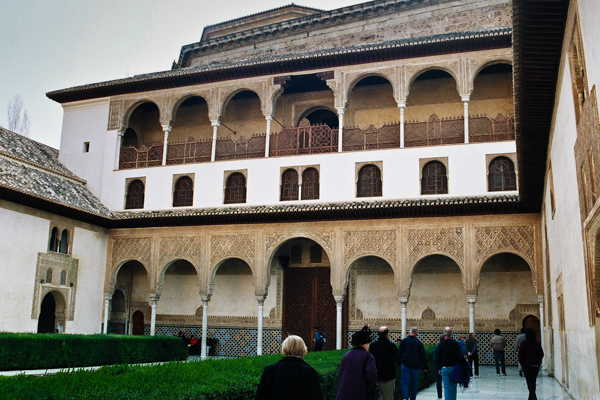 The courtyard is the center of the Hispano-Muslim household. The Court of the Myrtles has a reflecting pool surrounded by myrtle bushes. The screened windows above the arches were where the ladies of the household lived. They could see out without being seen. 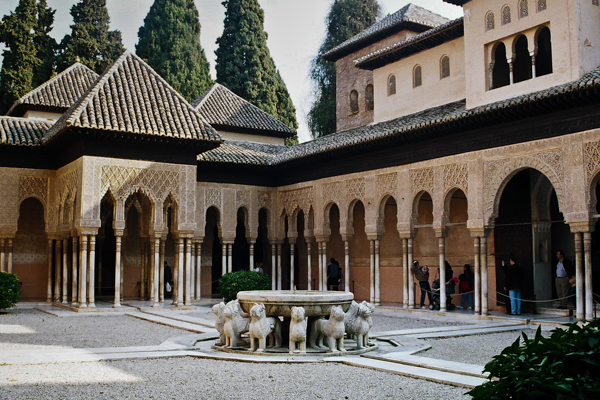 The Court of the Lions is perhaps the most famous location within the Alhambra. 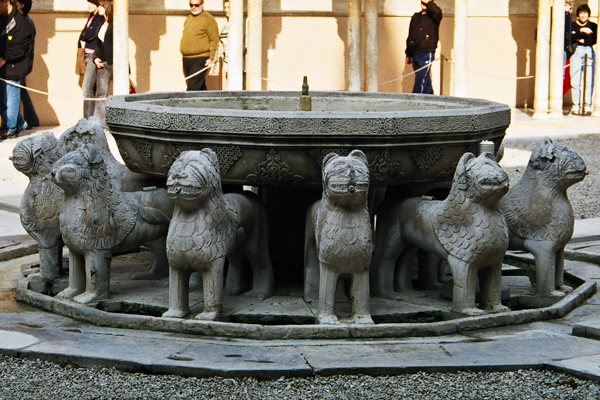 Here is a close-up of the fountain. In the years since we visited there has been an extensive restoration project designed to preserve the lions and restore the water system. The entire court was closed and ripped up. It was reopened in early 2012 and the fountain is now operational again. 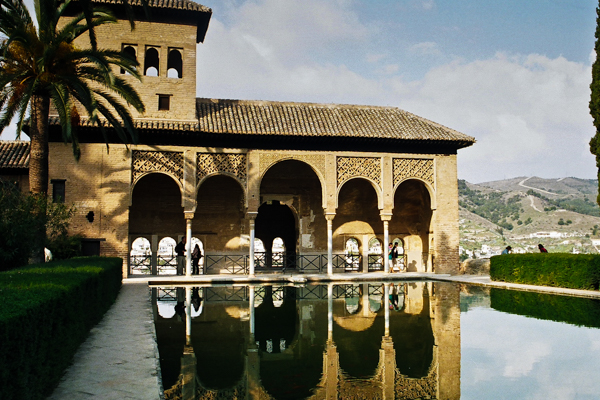 Unfortunately my notes from the time of our visit are not explicit enough to identify this delightful pavilion and I've not been able to identify it from WWW sources. 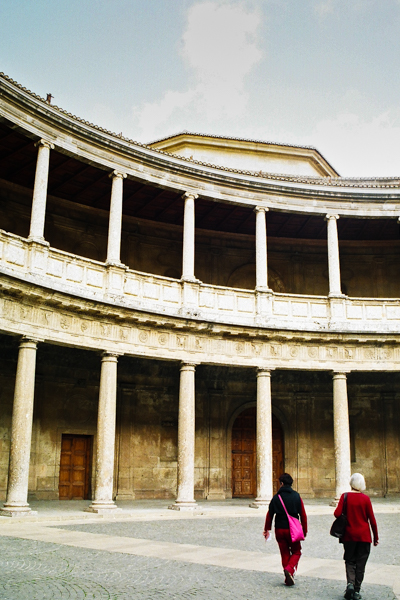 The Alhambra was taken over by the forces of Ferdinand & Isabella during the reconquista, which seized Spain from the Muslim leadership that had held it for several hundred years.

Charles V, Holy Roman Emperor, also Charles I of Aragon & Castile, was the grandson of Ferdinand and Isabella. He visited the Alhambra and determined to make it one of his retreats. He made many changes to various structures in anticipation. As it happened he never did take up residence there. Nevertheless, many older buildings were demolished in order to build this neoclassical palace that was never completely finished.

As beautiful as it may have been in another context, the dissonance between this structure and its surroundings was striking. 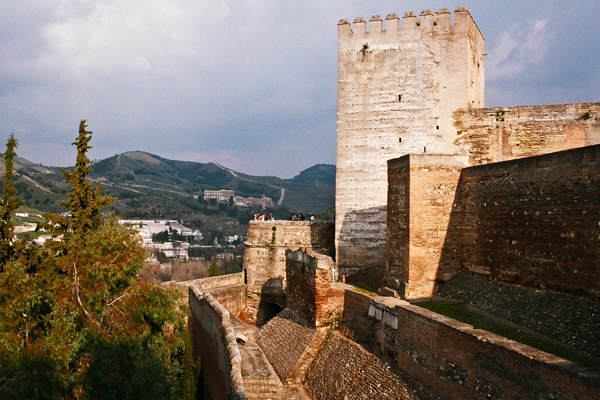 Although beautiful, the Alhambra was built as a fortress. This portion is called the Alcazaba. 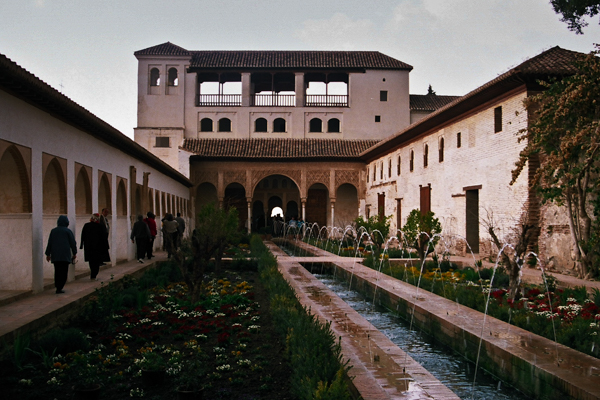 The Generalife (hen-er-al-LEE-fee) was the rural retreat of the sultans. It was dedicated to cultivation and grazing and was a place of gardens.

This particular section is known as the Court of the Main Canal. Even though it was winter and pretty chilly, this protected garden was full of flowers.

One day we took a tour of the nearby area called Las Alpujarras. It was the last stronghold of the Muslims forced out of Granada by the forces of Ferdinand and Isabella. They were eventually ejected from here in the 17th century by a decree expelling all of Arab descent, whether Christian or Muslim.

This area is on the far side of the Sierra Nevada from Granada. 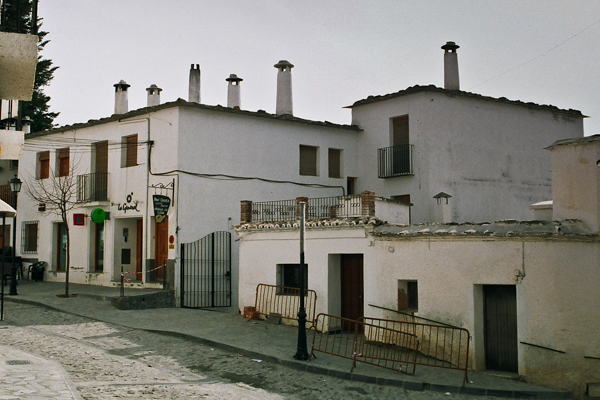 The local houses are noted for their flat roofs and tall chimneys. Clearly snow is not a problem here. 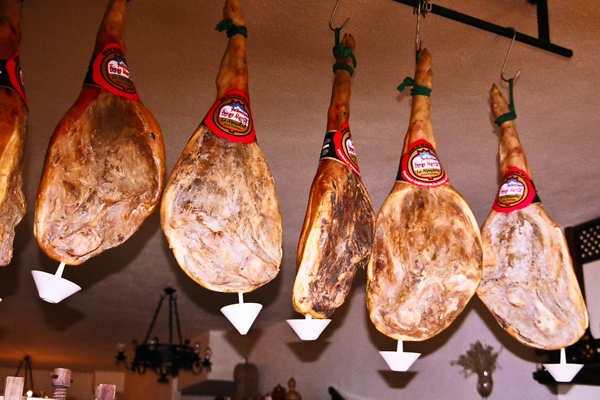 Prime products of this area are the delicious serrano hams. These, along with the even more delectable iberico hams, have only recently been allowed into the US. We were told that the ham producers historically had been uninterested in getting their products qualified for US import. They sold everything they could produce already, so why worry about expanding the market?

One of the things that we really liked about the Santa Paula was the all-you-could-nibble ham for breakfast. YUM!

The little umbrellas are to catch any remaining seepage from these dry-cured hams. 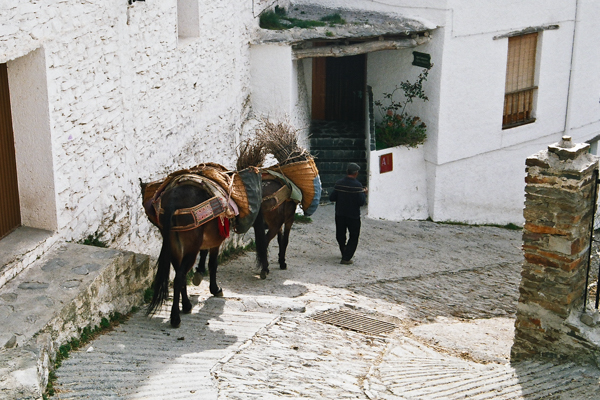 The steep and narrow streets of the villages are more suited to mule traffic than standard trucks. We will see much more of this in Morocco. 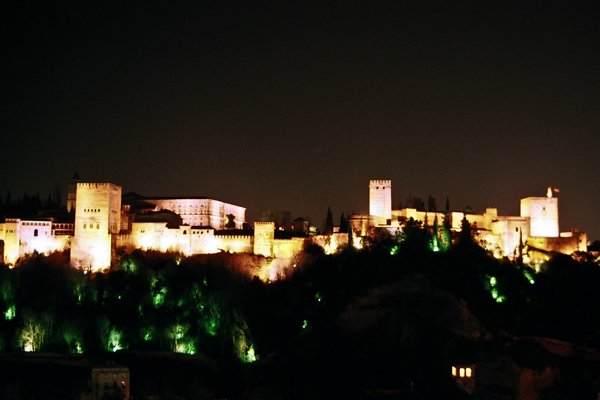 Our last photo op of the Alhambra was this nighttime view from the patio of a restaurant where we had our final meal before leaving for the Costa del Sol.

We were sorry to say goodbye to Granada (and the Santa Paula), but were looking forward to new adventures. Click your browser's "back" button to continue on with us to Ronda.