The day we left Granada turned out to be foggy. We had a hair-raising bus ride through the mountains, but our trusty driver, Pepe, brought us through safely to great applause. After crossing the mountains we stopped first at Antequera, the location of some neolithic archeological remains, then proceeded to Ronda, a striking city built across a dramatic ravine. After lunch there, we had an uneventful ride to our hotel on the Costa del Sol, where we would spend two final nights in Spain before our crossing to Morocco.

Since Pepe accomplished a heroic feat by bringing us safely through the foggy mountains (seriously, we've made a lot of hairy bus trips, but this was truly special), it seems appropriate to include a picture of him (on the left) and our wonderful guide Gerardo, who was an encyclopedia of information about Spain's history, culture and geography. 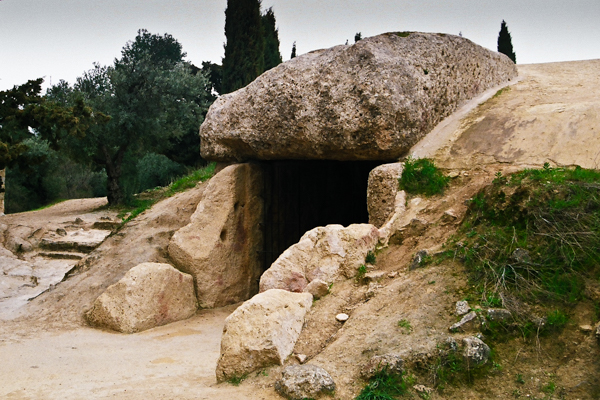 There are three dolmen, ancient burial sites made of huge stones, near the town of Antequera. This one, the Dolmen de Menga, was built prior to 2000 BC and is one of the largest in Europe.

Next we traveled to the ancient town of Ronda for an all-too-brief visit. The modern city is built on the two sides of a deep gorge. It seems like most of our travels are teasers that make us want to learn more and come back.

This is a view of the surrounding countryside from the "New Bridge." 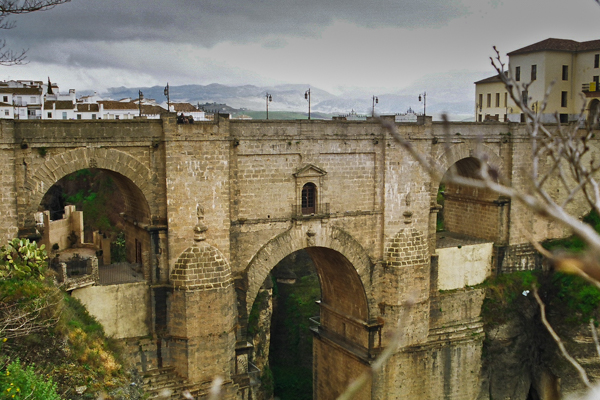 The New Bridge, built in the 18th century, spans the ravine separating the two parts of the city. It replaced an older one that collapsed.

One of our group climbed down into the ravine and I'm sure got much more dramatic pictures, but I was more interested in lunch (at least for this trip).

The pictures from the high ground can't give quite the dramatic perspective, but at least this one indicates the depth of the gorge that this city spans. 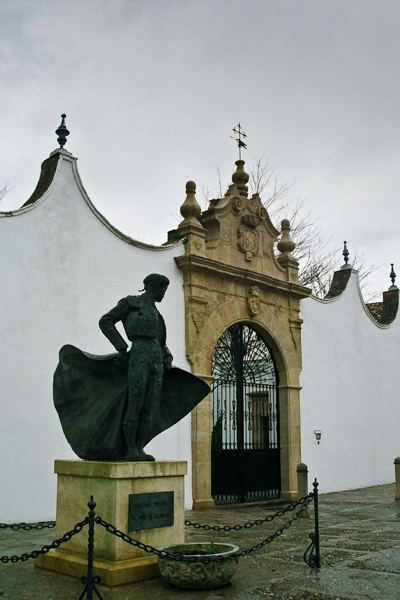 Ronda was one of the birthplaces of bullfighting. The bullring located there was constructed in the 18th century. It was at this time that bull fighters began to face the bull on foot rather than on horseback. There were two major bullfighting families that originated in Ronda: the Romero and the Ordóñez families (this sculpture is of Cayetano Ordóñez, who was used as the model of the bullfighter in Hemingway's The Sun Also Rises). 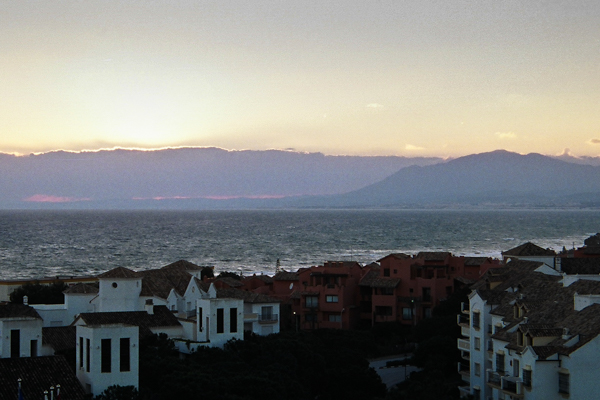 That night we settled into our hotel on the Costa del Sol, where we would stay for a couple of nights. I don't recall exactly which town it was in. This was the view west from our hotel room.

The hotel had a private beach that was reached through an extensive garden. Since it was winter and windy to boot there were no bathing beauties to be seen and there was no temptation to take a dip in the Mediterranean. Not that I am a fan of beaches at the best of times.

The next day we took a day trip to Gibraltar. "The Rock" really is quite distinctive, although we never got the same perspective that is so familiar from the Prudential logo.

This is the border crossing from Spain into Gibraltar, which is British territory. We were told that in the high season this crossing could take hours. There was certainly plenty of space for busses and cars to wait.

Although Gibraltar was ceded "in perpetuity" to Britain in 1713, Spain continues to assert sovereignty over the territory. The inhabitants, however, have consistently chosen to remain a British dependency in various referenda. 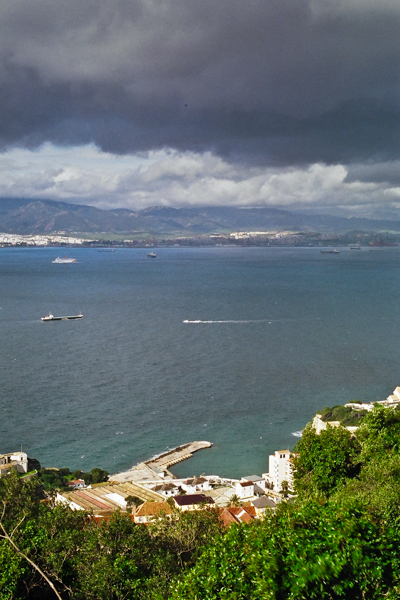 This picture is looking across the Bay of Gibraltar (or Bahía de Algeciras, depending on your perspective) toward the Spanish port of Algeciras. We will be departing from this port for Morocco on the following day.

The jetty at the base of the mountain is part of an extensive British repair station for naval vessels. 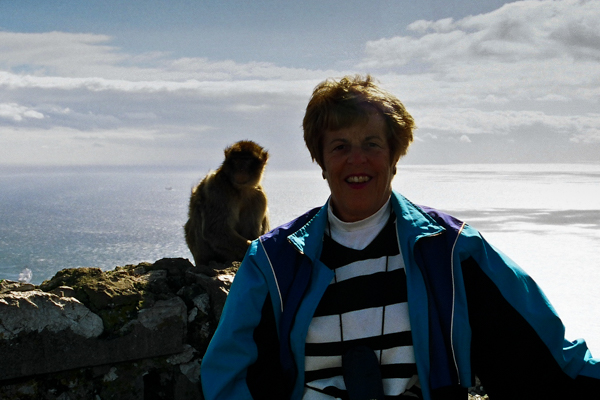 One of the reasons to travel all the way to the top of the rock is to see the resident Barbary apes. While I was taking this picture, Sue was very anxious that I get it over with so that she could move away from the critter (she wasn't really standing close to it in spite of the appearance). They could be aggressive to be sure and were very agile. A bit later one jumped on my back from quite a distance away! No harm done to me or ape, however, although it was QUITE startling. 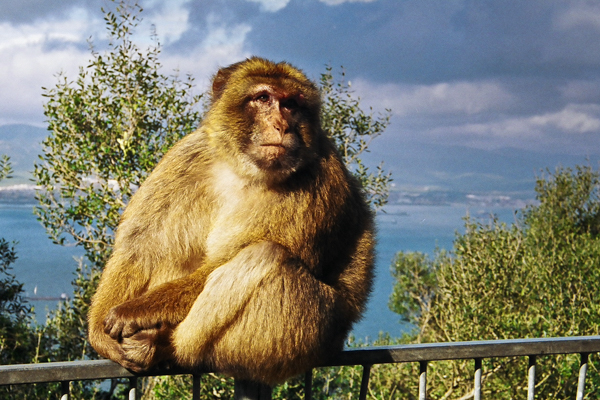 Hamming it up for the tourists. 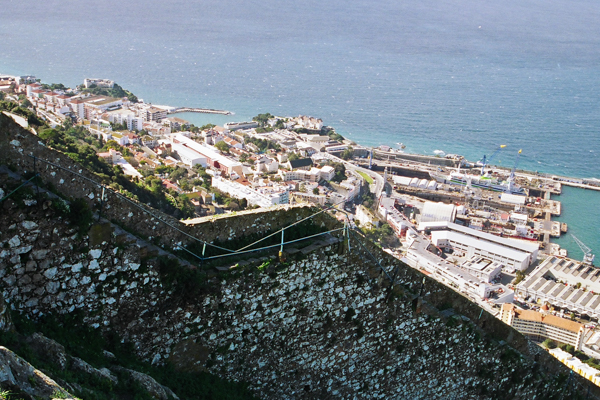 We rode up to the top of the rock in taxis, but it is possible to climb up these intimidating stairs called the Mediterranean Steps. At the time of our visit they were posted as unfit for use, but they have since been repaired. 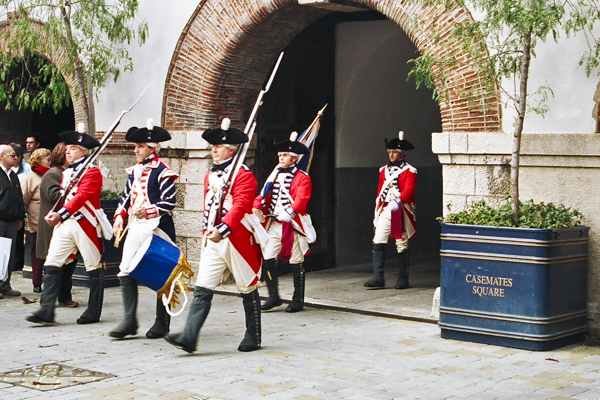 Make no mistake about it, Gibraltar is British. And in the tourist business. At regular times during the day there is a "changing of the guard" with red-coated regalia.

To continue on to Morocco, click your browser's "back" button to return to the index page.