After our ski week, the PVS band splintered. Some joined the other PVS trip headed for Courchevel. Some headed home. Some joined us on an sightseeing excursion to Prague. 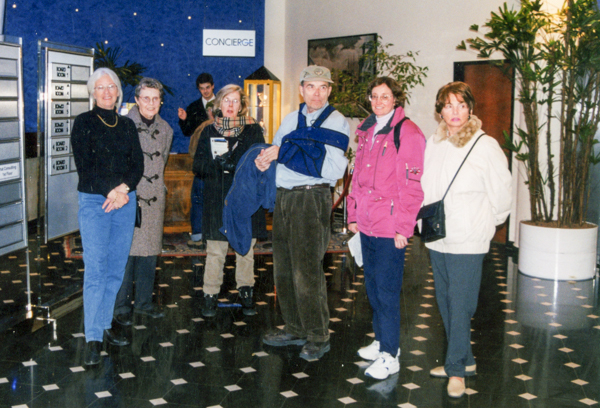 The extension to Prague was an official BRSC Eurofest extension. I don't recall whether we had a choice of a hotel in the city center, but if we did, we opted for a nicer and less expensive one in the 'burbs, It was a good choice. 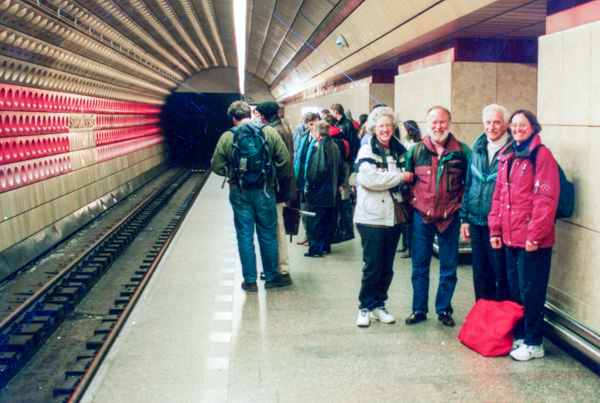 The attraction of the hotel was the subway stop across the street. It was a direct run to downtown. As in most European cities, the public transit is fast, clean & efficient.

This picture of Jim & me, Nat, and Jan must have been taken by Bob Marx. 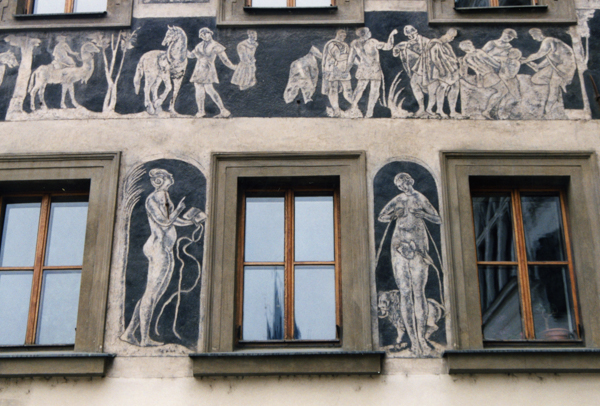 Prague was the first place I encountered sgraffito – the technique of incising a design into multiple layers of tinted plaster, but I've seen it many times since. The designs ranged from simple geometrics to pictorial scenes such as these.

The center of the city is the historic square dominated by the 14th century Old Town Hall. At the time of our visit there was an extensive Easter Market set up in the square. 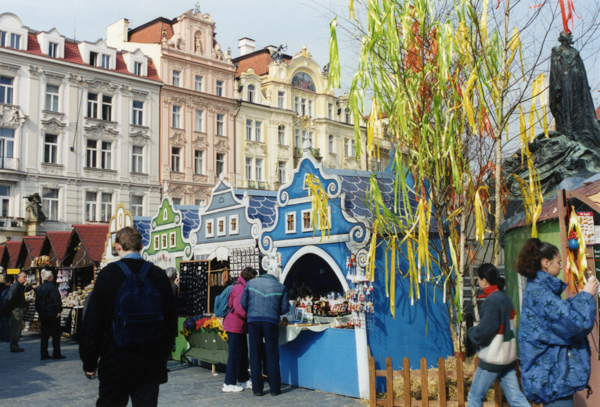 I expect most of us bought some kind of tchotchke at the market. I got a hand-carved Christmas ornament. Another souvenir was a pair of garnet earrings – not from one of these shops but from a reputable jeweler's shop. 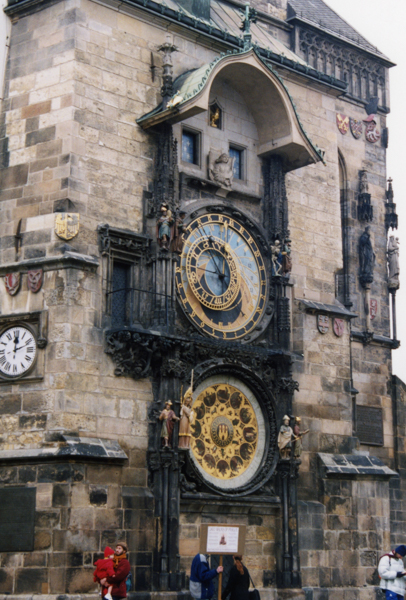 The medieval astronomical clock adorns one side of city hall. Details and close-up pictures may be seen at the link. 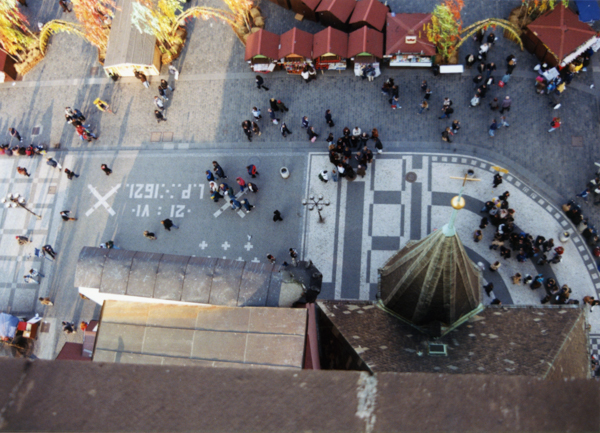 As usual I head for the highest place around – the overlook in the town hall tower. This dizzying look down shows a selection of the decorative sidewalk patterns. There were many such designs throughout the city (I took pictures of lots).

They are practical. Underground utilities can be repaired by pulling up a limited number of pavers, stockpiling them nearby, and replacing them when the job is done. Much nicer than jackhammering concrete or grinding asphalt and clogging the landfill with the waste!

There is, however, a dark side to the pavers. Some of them are made from tombstones plundered from Jewish cemeteries. See details at the link. 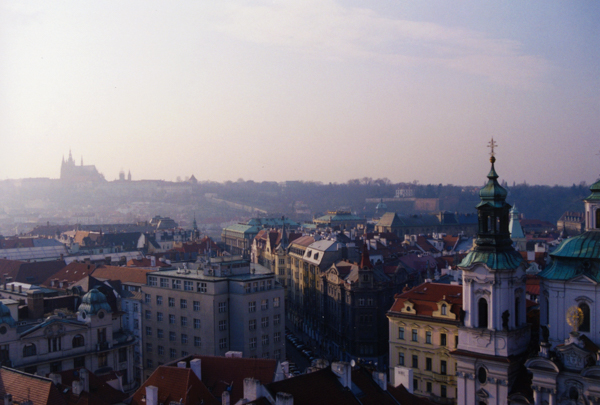 A more conventional overview from the tower. Past the foreground buildings and across the river Prague Castle dominates the high ground. 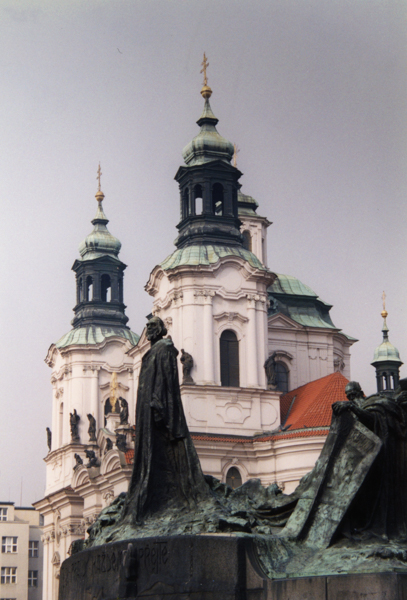 St. Nicholas church overlooks the town square and a monument to Jan Hus. The Bohemian Reformation, led by Hus and others, preceded the reformation of Luther & Calvin.

Hus was condemned in 1415 and burned at the stake. 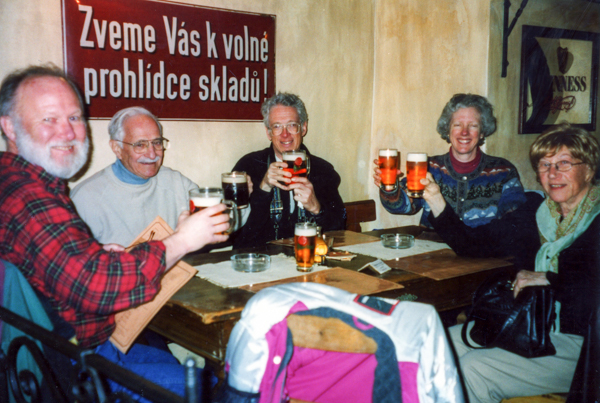 After hitting touristic high spots, our small band stopped for a delightful meal and a cold Pilsner Urquell – the name means, more-or-less, the "original pilsner."

The sign reads: "we invite you to a free warehouse inspection." It looks more romantic in Czech! 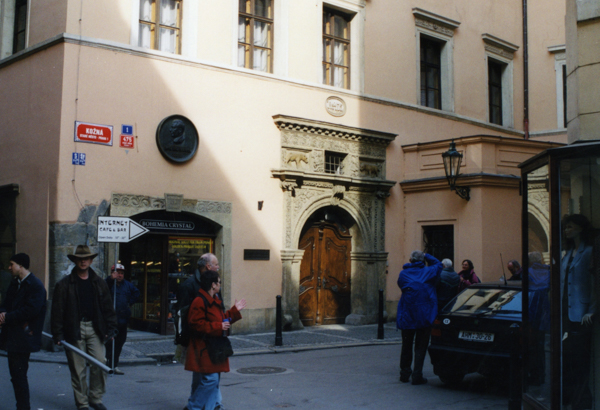 After lunch we were on a mission. One of our PVS friends is from a Jewish family that barely escaped Prague before the Holocaust. They left everything behind and their house was confiscated. While Czechoslovakia was behind the Iron Curtain, they could do nothing, but after 1990 families were allowed to pursue claims. We had promised to find her family's home and here it is (there is no mention of Edith's family at the link)! It was now owned by the state, which complicated matters, but I think the family was able to get something for it. As she said, they didn't want the property; they wanted to be acknowledged. 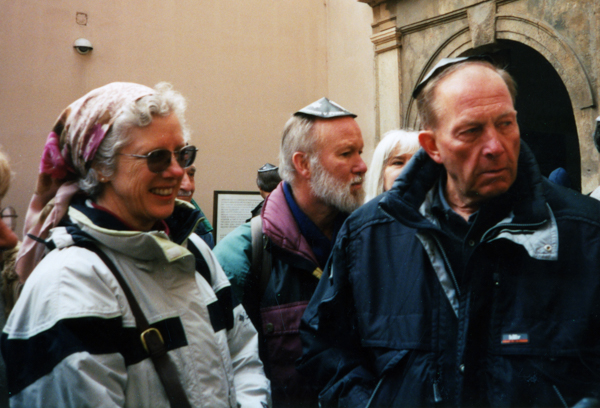 We toured the Jewish quarter of Prague. It included time at the sobering memorial at the Pinkas Synagogue and a walk through the Old Jewish Cemetery. They are part of the Jewish Museum in Prague. 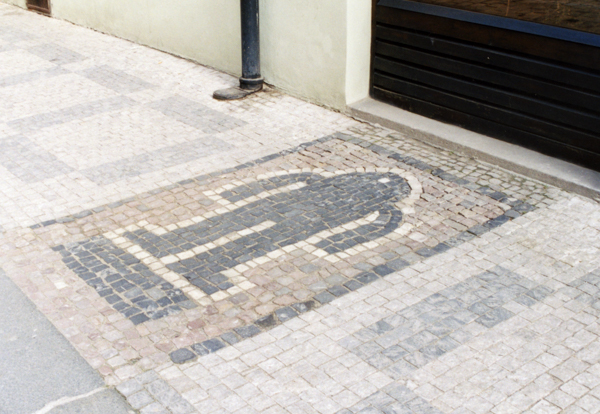 One of the famous tales of the golem is set in Prague. This sidewalk design commemorates it.