There is plenty to see and do in the area besides skiing. 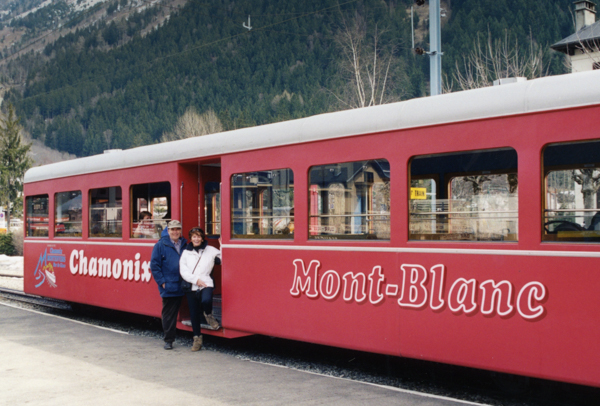 One day Jim and I, along with the other "walking wounded," took the train to Montenvers, which overlooks the Mer de Glace.

The cog train departs from a station on the edge of town. Reg has his arm in a sling to protect the dislocated shoulder. Suzanne had a nasty fall on the pre-trip week in Morzine that kept her from skiing in Chamonix. 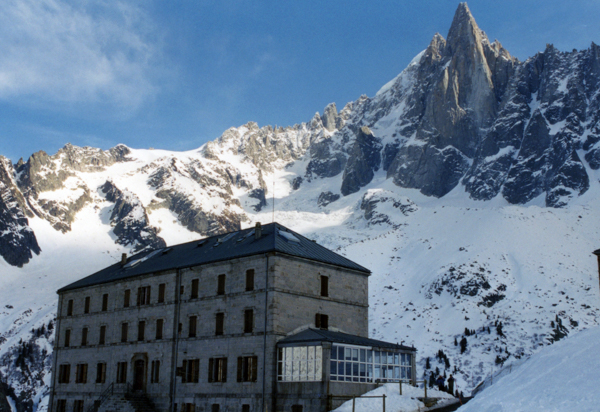 The Grand Hotel was built in 1880 and has had ups and downs since then. I don't recall what the room status was in 2002, but we had lunch at the restaurant.

The pointy peak above the hotel is the Aiguille du Dru.

Montenvers overlooks the Mer de Glace, which our friends had skied down. The glacier has receded significantly from former years.

My knee told me to stay away from the steps descending to the ice cave carved in the glacier, so we didn't visit it. Too bad because when we returned in 2015 the glacier had retreated much more and there were many more steps to go down – and come back up again!

Suzanne and Reg. During our lunch on the patio of the Grand Hotel we watched some skiers descend the couloirs on the far side of the valley. They weren't completely insane, They traversed along peering over the edge until they found a place that looked skiable (if not reasonable) before descending. We were happy they made it down safely.

One of the original steam engines used on the railway is on display. It is mounted to show the steep grade that required the rack and pinion drive. 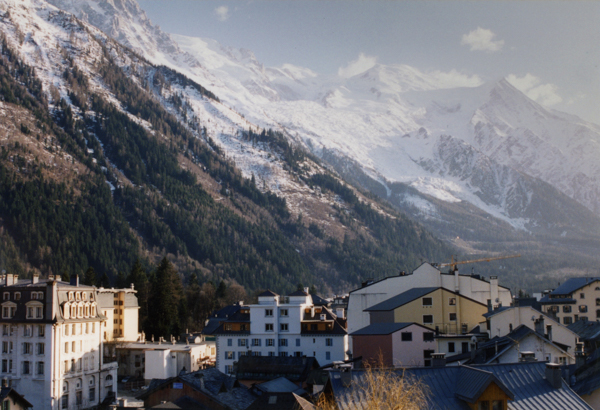 Chamonix is a town, not just a ski resort, tucked into the valley below Mont Blanc, which is either the highest or second highest peak in Europe, depending on whether the Caucasus are considered to be in Europe or Asia. Nowadays most folks consider that range to be European and therefore Mt. Elbrus, at 18,000+ feet is much higher than Mt. Blanc, at somewhat less than 16,000 feet.

The spelling of the name is now standardized at "Chamonix," but we also saw "Chamouni" and Chamouny" among other spellings. 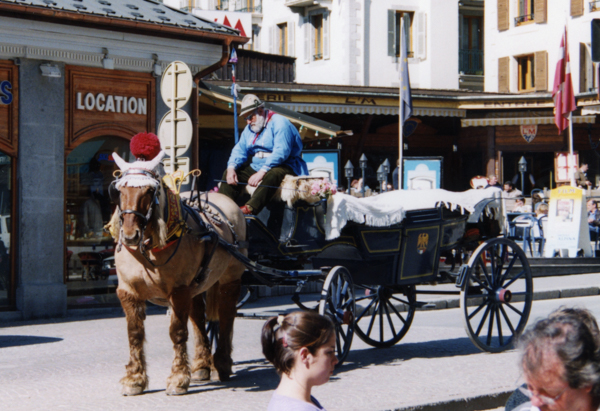 This gent and his horse were available for carriage rides. The same gent & carriage were around when we returned to Chamonix in 2013. I can't vouch for whether it was the same horse though.

I mentioned earlier that I went up to the Aiguille du Midi to send off my glacier-skiing pals. The way up is on a cable car, which was far larger than these smaller gondolas stored at its base. They are used, during the summer months only, to transport passengers across the Vallee Blanche to the Italian side of the massif.

The view of the Aiguille du Midi from the cable car on the way up. The "sticky-uppie" is not the cable car terminus. Is is an additional hike and elevator ride,

Jim did not partake of this adventure.

At the end of the cable car is a multi-layered building impressive in itself set aside the view. Check the link for breathtaking images.

One of the Mont Blanc peaks; there are several in the massif