This wasn't exactly a PVS trip. The trip leaders, Don & Kathy Dillon were PVS members. There were other PVSers on the trip. But there were a number of non-PVS members (at the time, although many later joined) and the trip was not officially sanctioned by the club. Nevertheless, we always think of it as a PVS trip.

The trip got off to a somewhat inauspicious start because of an airline delay of a couple of hours. We were flying out of DC National, which occasioned some grumbling by Jim & me, on Continental (remember them). I no longer remember exactly what the problem was, but eventually we made it to our destination with all our bags.

Telluride stands out in my memory as one of the most beautiful places I've ever skied. The pictures don't do it justice. On this occasion we stayed in the actual town of Telluride (altitude 8750') and it was our first introduction to Colorado high-altitude residence. Later PVS trips stayed at the Mountain Village (altitude 9540') and we had been uncomfortable enough at the lower altitude to put us off the higher one. Plus we really enjoyed being in the actual town. Even though it wasn't exactly ski-in-ski-out it was close enough for us, if not for the rest of PVS. 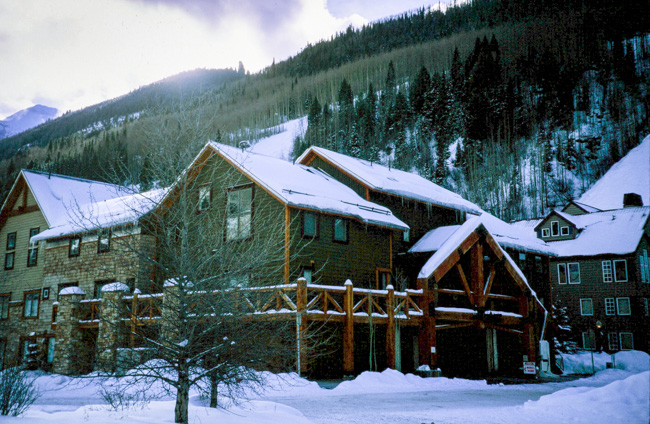 Rather than staying in a hotel, we were spread across several condos. Jim and I were in the second story of the unit shown here. It was very comfortable and had a nice kitchen so we could fix our own breakfasts. We even cooked in a couple of nights. 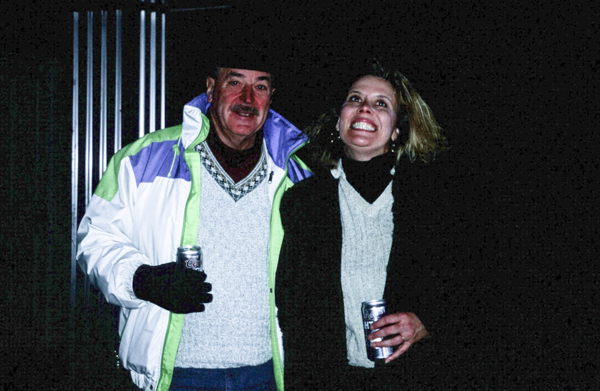 This couple shared the condo with us. They were not PVS members and we never saw them again, but they were quite nice.

The condo had two bedrooms -- one better than the other. Since we couldn't think of a better way to allocate the space, we drew straws. I can neither recall who got the "plum," nor what exactly it was that made it more desirable. 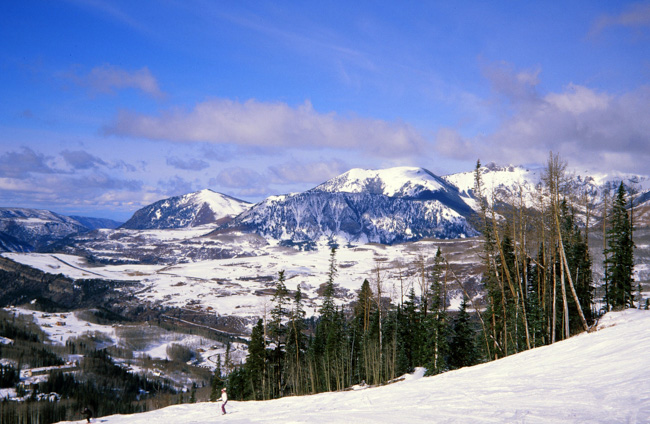 The view from the mountain looking down the canyon. The airport runway can be seen to the left of the picture as a straight cleared space. As I recall we flew into and out of Montrose, CO. I know we visited the Telluride airport, however, perhaps to drop off another traveller. Although it is small, it is served by United Express and other airlines. 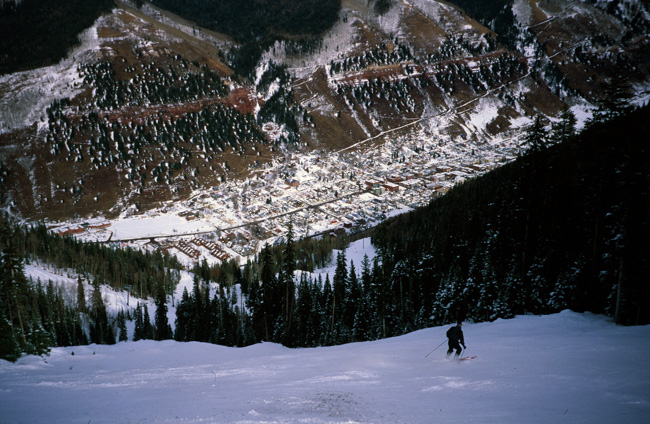 Skiing high above the town. Yes, it was possible to ski right into the area of our condo -- as long as you didn't mind black diamond runs.

The more common route was to take the gondola from the Mountain Village. 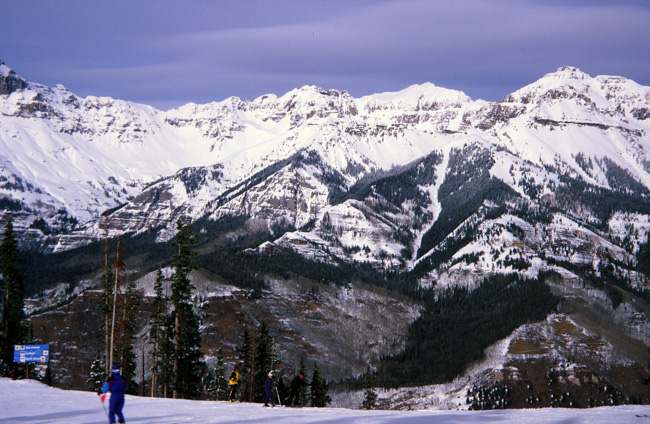 Not all the runs at Telluride were scary steep. They even had a grading system that included "double blue" runs. We typically call the equivalent "dark blue" or "blue-black," but having a specific designation makes it easier to know what you're getting into. In Europe such runs are designated red. 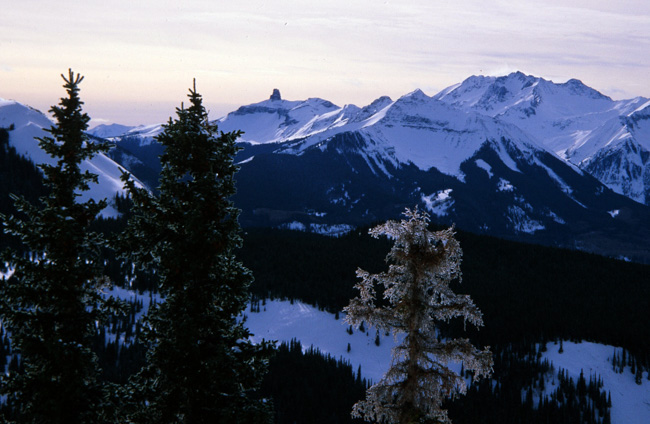 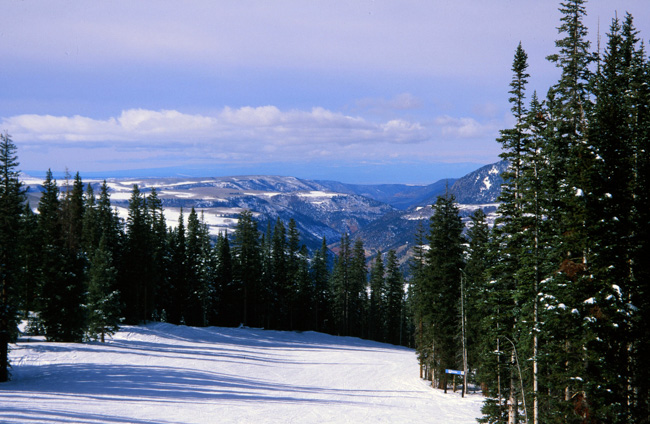 And there were plenty of gentle cruisers to be found.

One day Don arranged a trail riding option with Telluride Horseback Adventures. It was a hoot and well worth taking time off from skiing. I had the souvenir "I Ride With Roudy" bumper sticker posted up in the barn when we still had our farm. It may still be there. Roudy was quite the character although he had some negative opinions about Arabian mares. I staunchly defended mine! 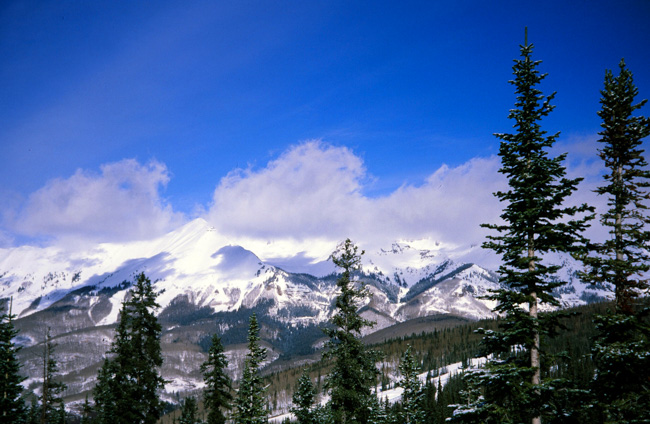 It was gorgeous just about everywhere you might look.

Another notable excursion while in Telluride was to Christ Presbyterian Church for Sunday worship. It was a delightful little church and I enjoyed it very much. 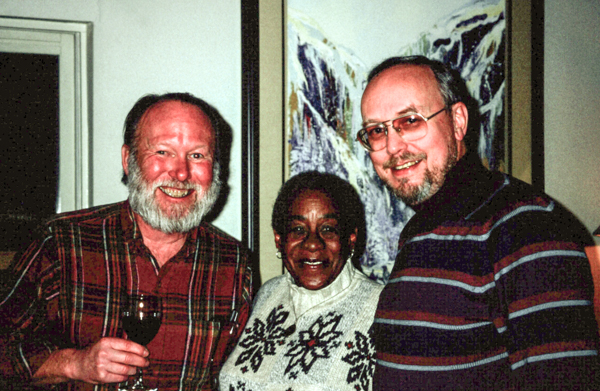 It was at Telluride where we first met Mike & Eloise Strand. They have since joined PVS and we have had many fun times together.

I don't recognize the couple with Mike & Eloise, but standing behind Eloise is Dina Taylor. She was a stalwart PVS member and trip leader for many years. 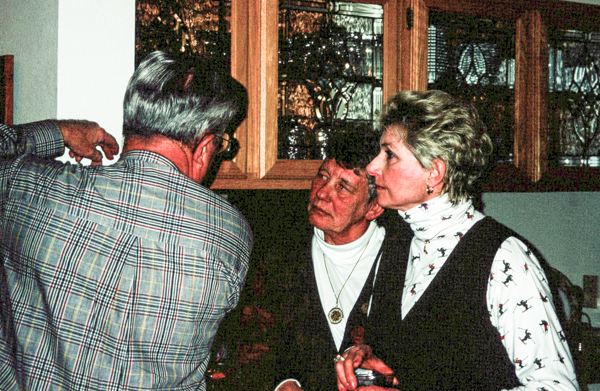 Jack Peoples (back to camera) was another PVS trip leader. He has the rapt attention of Karin & Marion Webb. These two ladies were not sisters; they were sisters-in-law having married brothers. I think they may both have been widows by this time, but they were still fast friends. 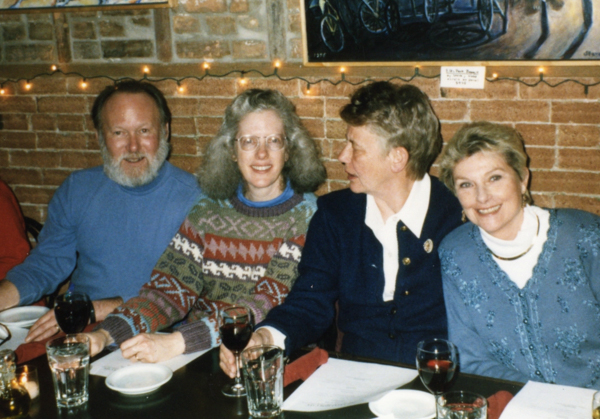 Another picture of Karin & Marion -- this time with Jim & me. We were enjoying the final dinner. 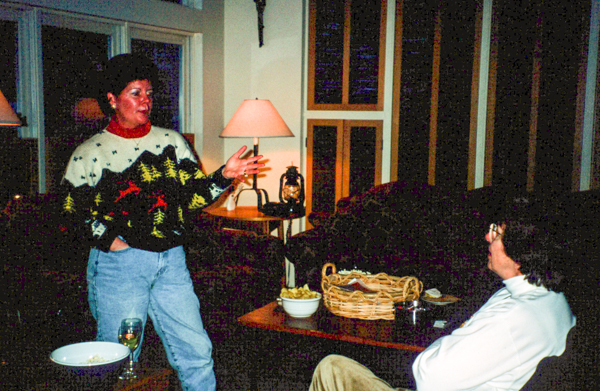 Co-trip-leader Kathy Dillon. I'm sorry that I don't have a picture of Don.

This was a great trip like all PVS adventures.