After the meeting was over, we rented a car and headed across the island. We had limited time so focused on the south-west section. We traveled across the central mountains to Ponce on the south coast and did day trips from there. In the almost thirty years since the trip, I've forgotten the exact sequence of when we went where, but as usual, the WWW helps to jog my memory on locations.

Either on our way to Ponce or as a day trip, we visited the Hacienda Buena Vista, a demonstration coffee plantation. In addition to the complexity of coffee production, I remember most the plethora of chickens, a few of which are visible here. 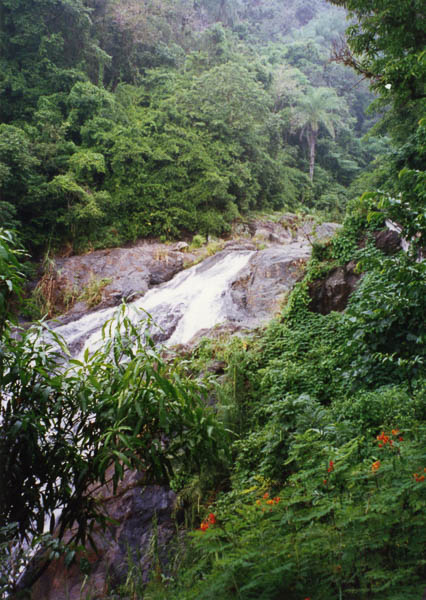 A waterfall on the grounds feeds a canal used in many stages of the coffee production. 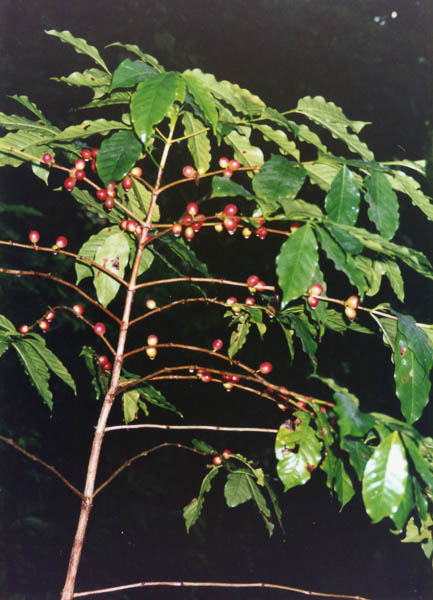 Coffee is made from the seed contained in the berries on the coffee plant. We were able to taste the berry, which was sweet although it didn't have much pulp.

The seed endures a complex sequence of operations to become the bean that coffee drinkers know and love. At the time of our visit I was reminded again of the obscure sources of many much-loved foods, e.g., who ate the first artichoke? He or she must have been really hungry!

Coffee doesn't even have the characteristic of being nourishing.

The hacienda grows its coffee plants throughout the wooded area. It produces a better tasting product, but is more labor-intensive to harvest. It processes the beans according to the "wet method" mentioned at the link above. 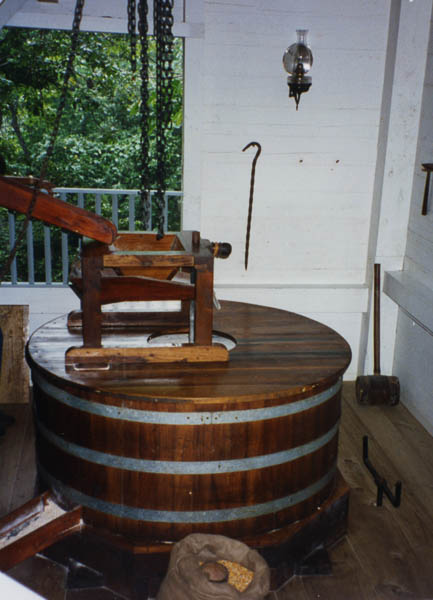 The fermentation tank where the last vestiges of the berry are removed from the beans. 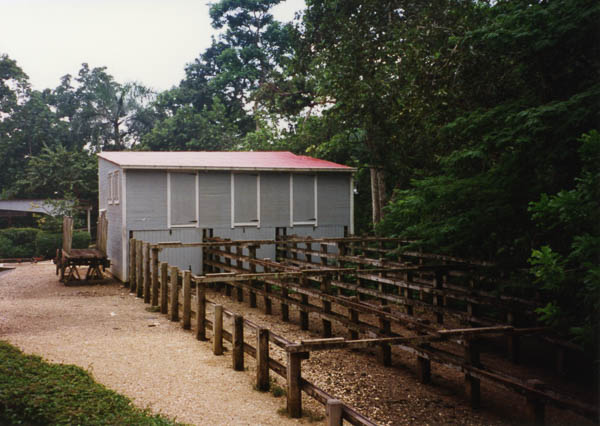 When coffee production is in season, the fermented beans are spread on screens laid across these racks to dry.

At the time of our visit, Puerto Rico was no longer producing coffee commercially, but that has begun to change. 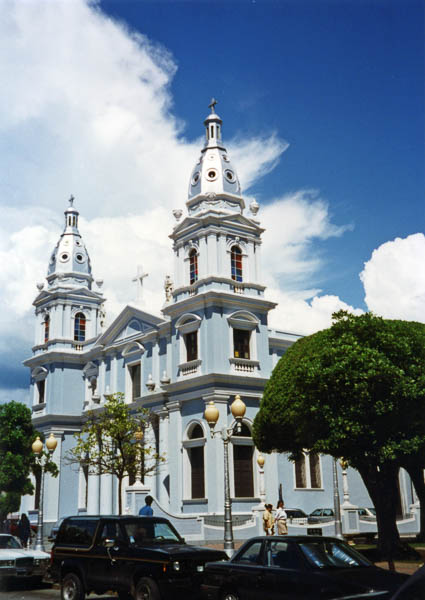 We spent a day wandering around Ponce. It was not a tourist mecca for outsiders, but there were numerous Puerto Rican tourists and shops, hotels, tourist traps, etc. to cater to them.

The Cathedral of Our Lady of Guadalupe dates from 1670 although the current structure was built in the 1930s.

Ponce is noted for papier-mâché Vejigante masks. I bought one as a souvenir and named it Carlos. It now hangs in our downstairs den. This was the first place I noted that many of the gee-gaws in the tourist traps were made in China or anywhere but Puerto Rico (unlike Carlos who was a local production). 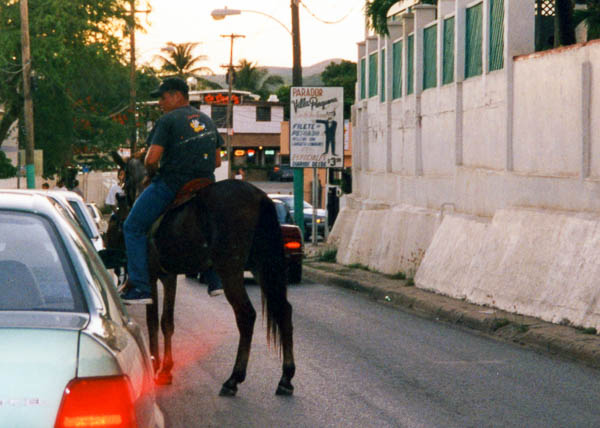 One evening we took a boat ride on La Parguera, one of three bioluminescent bays around the island. I couldn't get a picture on the boat, but the displays were fabulous. The excursions were popular with local tourists (we were the only Anglos to be found).

I'm not sure what this gentleman was up to on his horse, but he seemed to enjoy chatting up the tourists waiting to find parking. 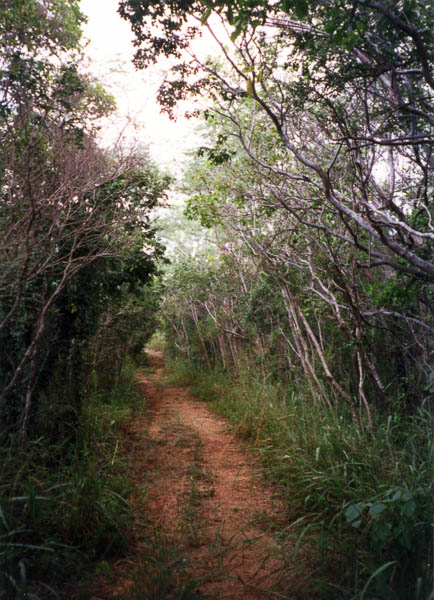 Another excursion was to the Guánica Dry Forest along the southern coast. There was much more to see there, but we enjoyed the trails.

One startling sight was this large ant nest high in a tree. I've not been able to find out what species of ant it might be. 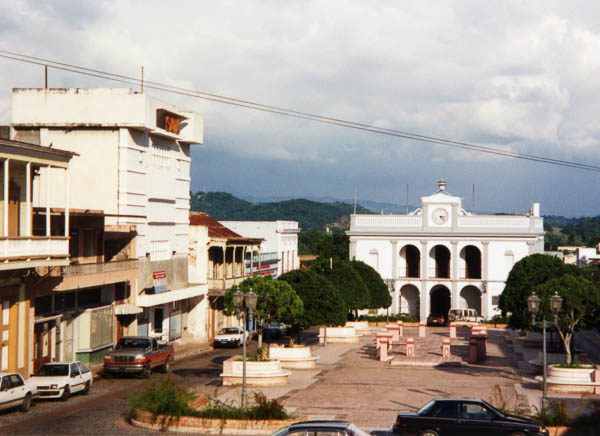 There was a wedding at the little church. The wedding party and guests cruised the square in cars with alternately winking headlights and low-rider jumps. Not to mention the horns! They were having a grand time. 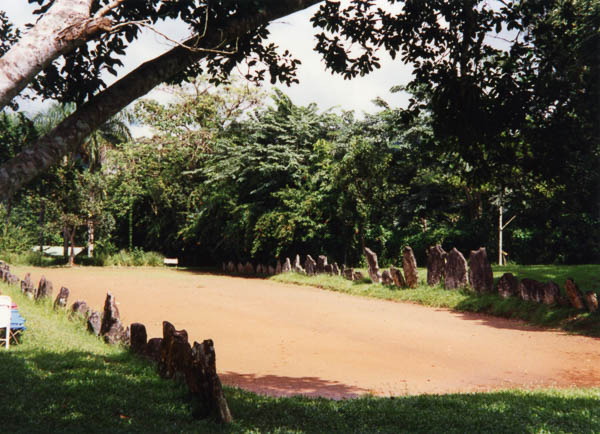 As we returned across the island to San Juan, one of our stops was at Caguana Indigenous Ceremonial Park. The Taíno people were the original inhabitants of Puerto Rico and other Caribbean islands.

Many indigenous inhabitants of the Americas played a ceremonial ball game. The one celebrated at this site is called batey or batú. 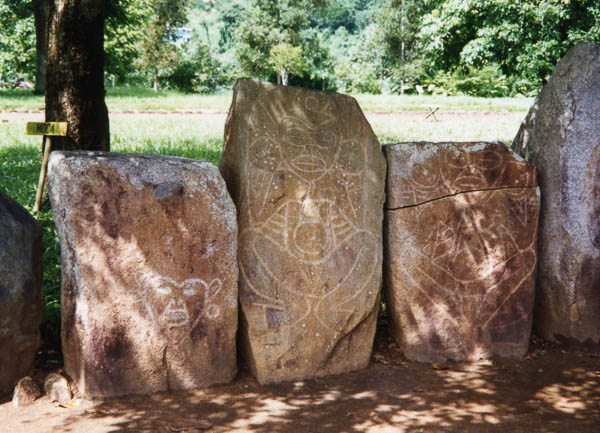 Many of the stones surrounding the ball courts were inscribed.

There was some kind of event scheduled at the park on the day we were there. I don't know if it was a wedding or other kind of celebration, but many chairs were set up and the celebrants were gathering. They didn't look like they were planning to play ball. 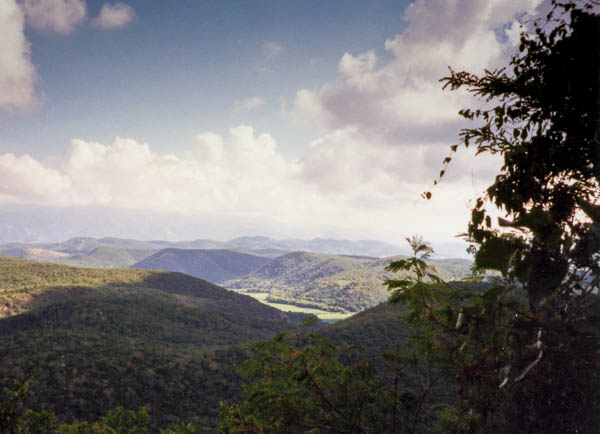 As we drove from the south to the north, we crossed the mountainous highlands. Jim remembers that we attempted to visit a cave complex, but the access lift was closed. It was probably Cueva Ventana. The view in this photo is similar to the view from the top of the cave.

One of our stops was the huge Aricibo Telescope, which collapsed in 2020. I don't have any pictures of it (too big!), but there are some at the first link. 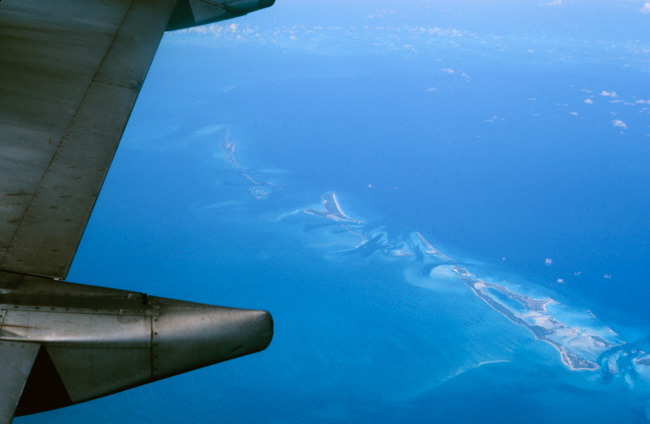 On the way back from San Juan to Miami we flew over beautiful islands.

I'm glad we took the opportunity to escape the north shore tourist corridor and visit a different part of the island. We didn't see many other Anglos, which is a pity.