Our experience with PVS ski trips has been uniformly good, but some have greater challenges than others. This one narrowly missed being a disaster and forever changed the way that the club sanctions trips!

It all started out ok. Historic Sun Valley had been on mine and Jim's to-do list for some time so when PVS approved a trip there we enthusiastically signed up. A great group of friends had signed up and we eagerly awaited the departure date.

As the departure neared, however, we heard nothing from the trip leader. No schedules, no plane tickets (remember those?), no nothing. She didn't return phone calls. We began calling around to our fellow travelers and they hadn't heard anything either. Finally the weekend before departure, two of our group went to the leader's apartment. There was no answer and they worried about a potential death. They approached the building manager with their concerns and he agreed to open the apartment to check. Fortunately there was no death, but it turned out that, unknown to us, the trip leader was an alcoholic and had gone on a bender due to the stress of managing the trip. (Having led a ski trip, we can testify that it really is stressful!) Our friends determined that she had in fact done all the work before falling off the wagon, so they were able to collect all the contact information, tickets, etc. We departed on schedule and were happy to find transportation and hotel rooms waiting for us at the other end!

The woman who had planned the trip soon drifted away from the club and we lost touch. It was sad because she was a delightful person when sober. I hope she has done well in the years since.

After the cliff-hanger beginning it turned out to be a fine trip thanks to our friends who took the initiative to investigate. Ever since PVS ski trips have required TWO trip leaders for each trip so that there is always a backup in case of emergency. 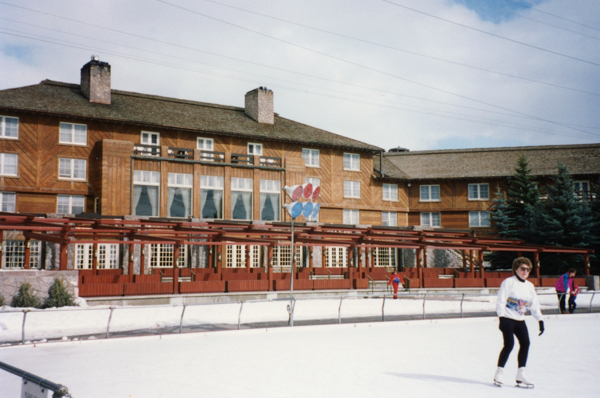 We stayed at the grand Sun Valley Lodge, made famous by decades of Hollywood glamor. (It has recently been completely revamped.) The exterior mimics stained wood, but it is really poured concrete.

A poster at the link show a view of the lodge from long ago, perhaps as early as the 1930s. 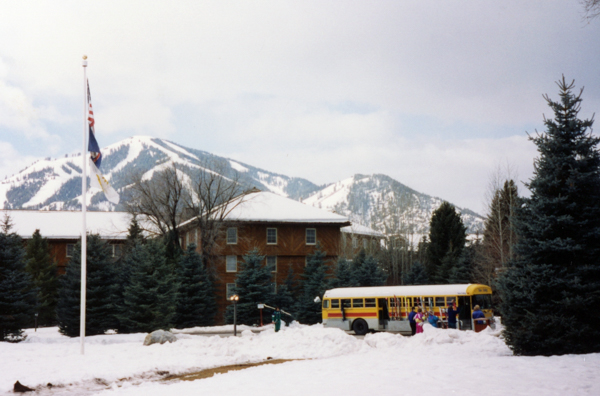 PVS much prefers ski-in/ski-out accommodations, but there is no such thing at Sun Valley. There were regular shuttle buses to take us either to the slopes or downtown Ketchum. 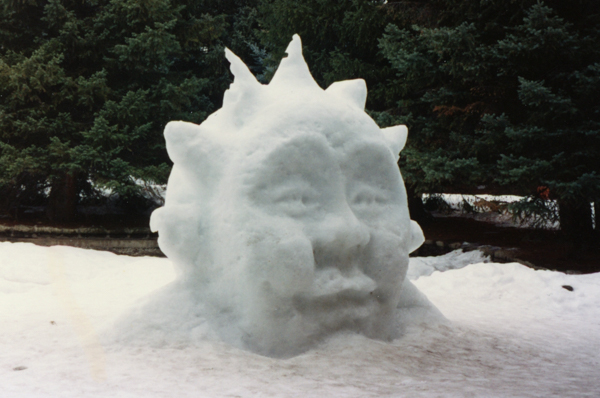 It was not a great snow year as can be seen by the moth-eaten aspect of the iconic sun snow sculpture in front of the lodge. 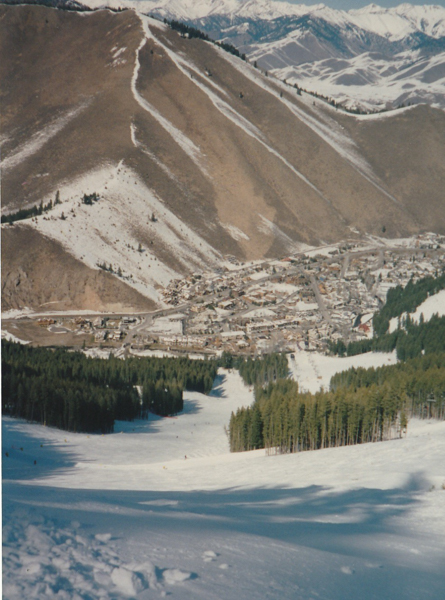 Not to worry, there was enough on the main slopes to make for good skiing.

These loooong slopes featured in a very scary incident one day. A group of us were skiing a black run at the top of the mountain. Edith fell and her bindings released. The snow was pretty hard-packed and she couldn't stop until she reached the bottom of the mountain!

Nat took off like a bullet following her. The rest of us gathered skis, poles, and other detritus and followed as best we could. We were relieved that no one was injured. Edith dusted herself off and skied the rest of the day. 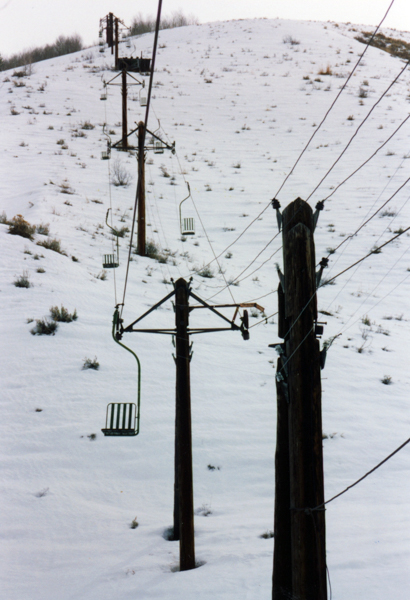 On our customary day off Jim and I visited an ancient ski lift preserved from the early days of Sun Valley. I don't recall seeing a description of it at the time, but searching the WWW finds that it is either the original Proctor Mountain chair lift dating from 1936 or perhaps  the Ruud Mountain lift from the same time frame.

Whatever. It's one of the original chairlifts and virtually intact. All the documentation I've found agrees that the chairlift was invented for Sun Valley. 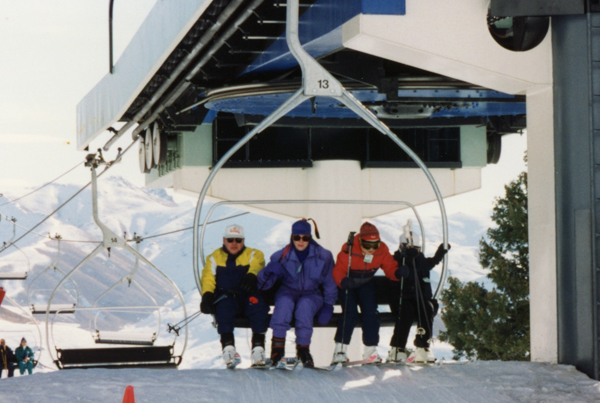 A more modern chairlift: John Smith, Pat Tengel, and Edith Rabinowitz. I can't see the face of the 4th skier, but I suspect it was Bette Walker. 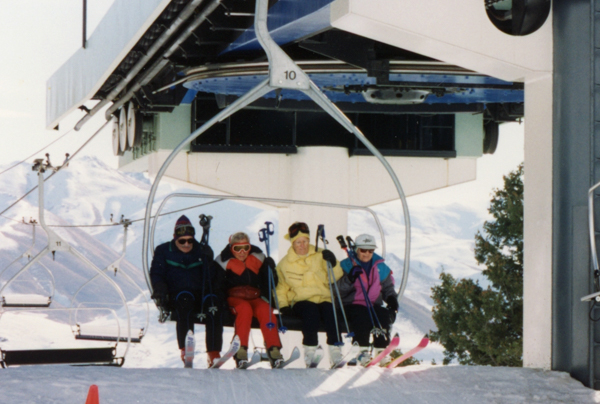 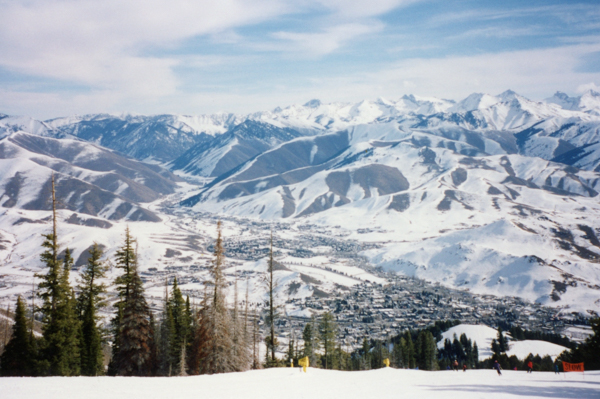 Overlooking Ketchum with a beautiful view of the Idaho Mountains. 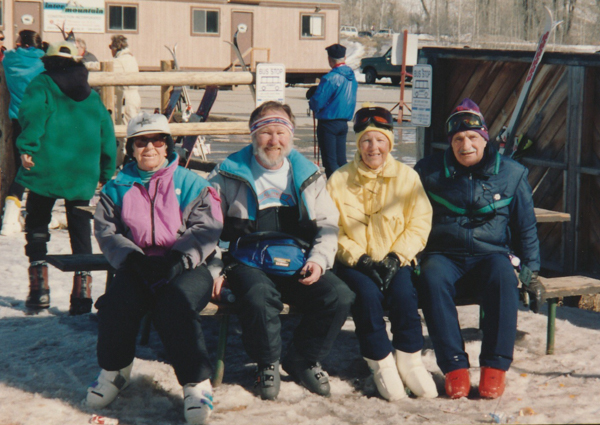 A few of our intrepid band waiting to catch the shuttle back to the hotel. L-R: Shirley, Jim, Mary Jane & Nat.

Nat and Bette were the team who pulled the trip together at the eleventh hour.

Check out the 1990s rear-entry boots! Jim and I never fell for that craze, but many people still mourn them. 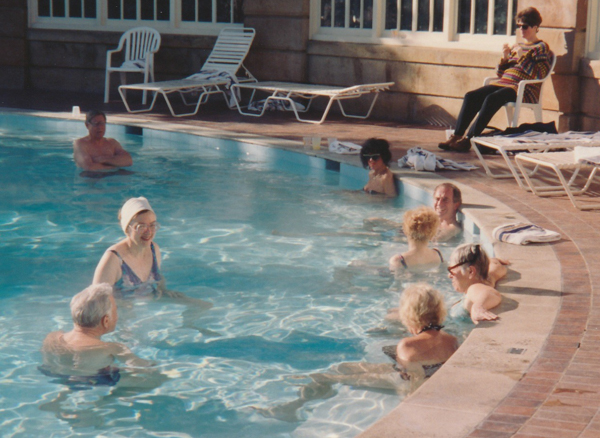 The Sun Valley Lodge doesn't have a hot tub: it has a hot POOL. Actually more than one, but we stayed in the one attached to the hotel.

There was bar service at the pool so it was possible to soak and sip. 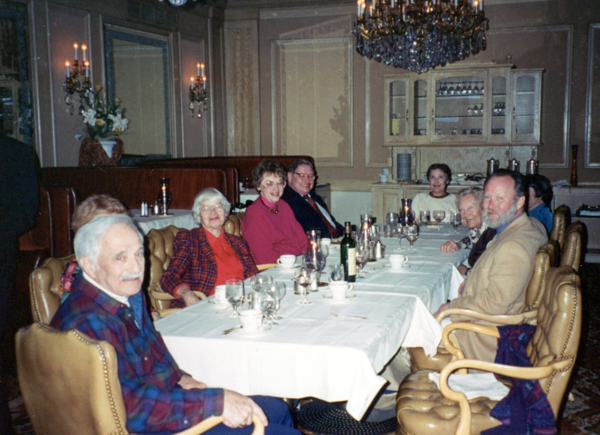 A great time was had by all thanks to Nat and Bette.