One of the major benefits of living in the DC area is participating in Smithsonian Resident Associates programs. Most of the excursions we took over the years had to do with industrial archeology and the ones from this year were no exception.

We participated in two programs in 1993, but struggle to remember all the details 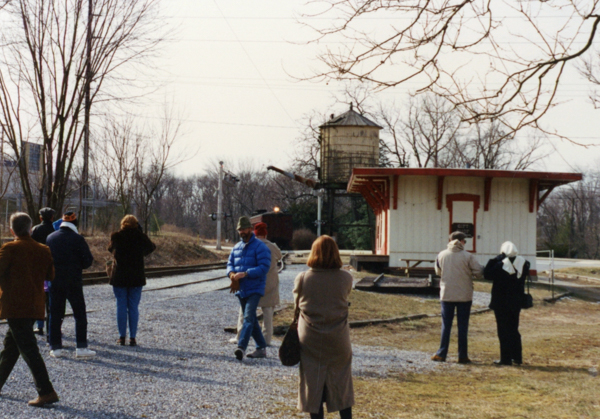 The excursion to Delaware featured a trip on a doodlebug operated by the Wilmington & Western Railroad. The program was still running up to 2020 and it seems to be the same format with the same leader, Joe Nevin.

It was a cold winter day as we awaited our chariot in Wilmington. The tower in the background provides water for steam engines, but our doodlebug is diesel. 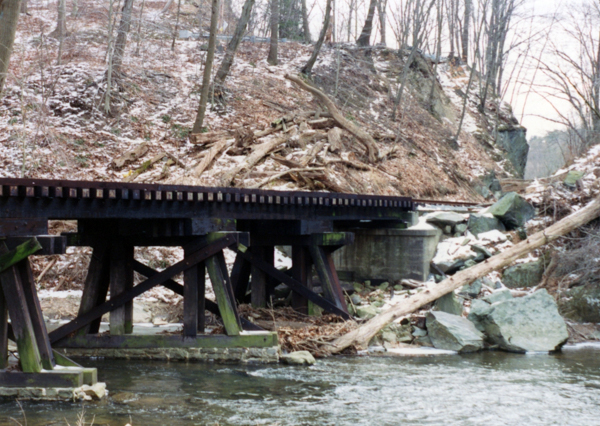 As we traveled up the Red Clay Valley, we crossed the creek several times. Once we made a stop to stretch our legs and take a picture of the bridge. My memory is that the photo-op included the doodlebug crossing the creek, but if so, that picture has been lost.

The slight dusting of snow hints at the cold. Brr.

Our lunch break was in Hockessin, DE, where our doodlebug waits patiently for us. We returned to Wilmington by the same route we came.

We then loaded onto the bus for New Castle, DE. 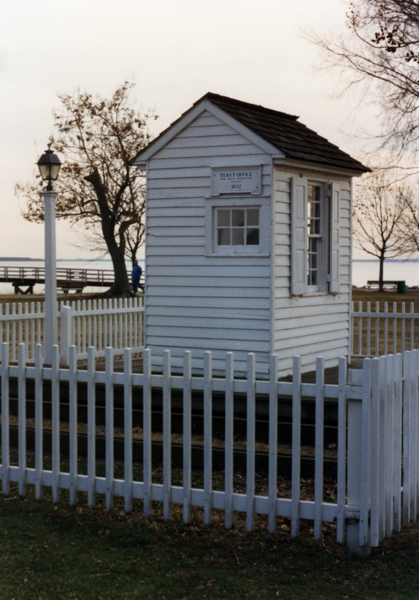 The New Castle & Frenchtown Railroad was one of the earliest lines in the country. It was not a successful venture. Part of the right-of-way is still in use by Norfolk-Southern, but the abandoned portion is listed on the National Register of Historic Places.

This ticket booth, dated 1832, is the only remaining structure associated with the railroad. 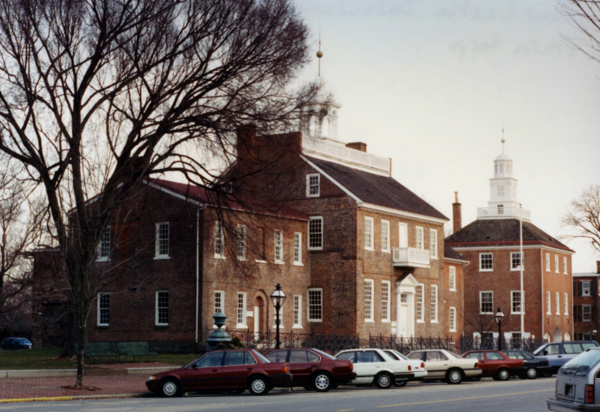 The Court House, now museum, was the reference point for the boundary between Delaware, Pennsylvania, and New Jersey. Disputants agreed that the cupola would become the center of a 12-mile circle that defined the boundary. Details are at the link.

The circle became part of the Mason-Dixon line that once demarcated slave states from the rest of the country and still serves as the location of the border between Delaware, Pennsylvania, and Maryland. 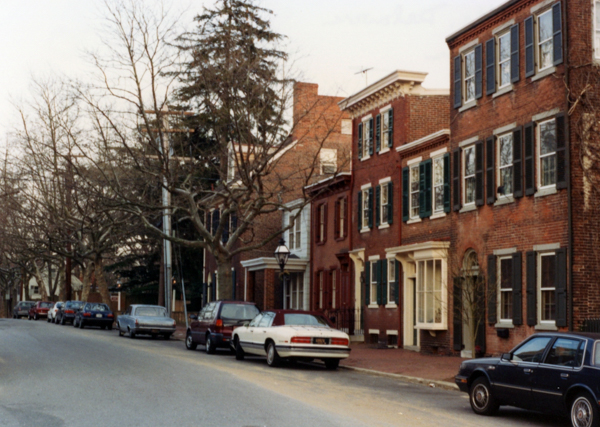 We didn't spend much time in New Castle on this trip, but we were so taken by its charm that we returned in 1997 for my 50th birthday celebration, which included a weekend of Arabian racing at nearby Delaware Park.

Jim bought us tickets to the "owner's tent" for the weekend, and it has been my all-time favorite birthday present. We enjoyed chatting with owners, and listening to their tales of bad luck, lame horses, and elusive trainers.

An unexpected feature of the weekend was the on-site filming of the movie Beloved. I now understand one of the reasons why it's so expensive to make a movie. The downtown needed only slight modification to take it back to the 19th century, but some of the props, like a market set with real ice and fish as well as other offerings must have cost a fortune. 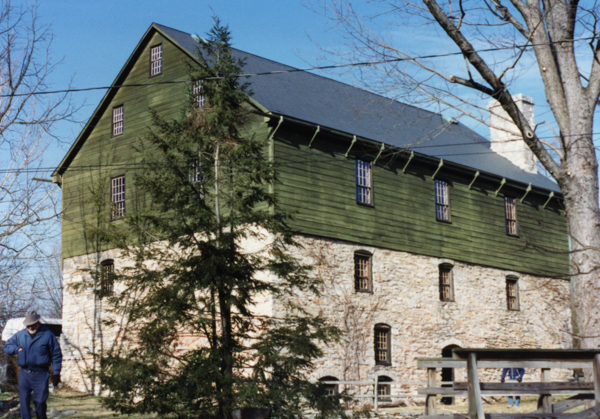 I have the most pictures from the Burwell-Morgan mill in Clarke County.

It is one of the oldest operational grist mills in the country. We were tempted by the locally milled offerings in the shop, but I don't think we purchased any. 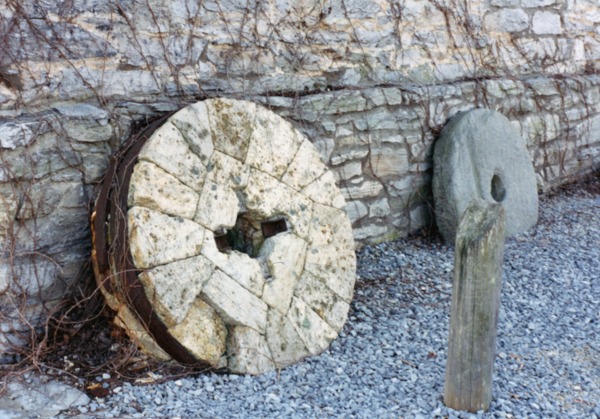 Two different types of old mill stones on display. The pair (there must always be two) on the left were pieced together from smaller stones held in place by an iron band. This is called a "composite stone." I don't remember if there was any discussion about the single stone on the right.

The Penn State website has a discussion of millstones with additional information on the place of mills in historical cultures.

The water that powers the wheel runs through this sluice. Putting together fading memories and these pictures makes me think that the mill wheel was INSIDE the mill structure rather than on the exterior as in many mills. Can't remember why.

The wheel is powered when the sluice gate is open.

When the sluice gate is closed, water from the mill race discharges directly into the tail race.

I have pictures from two other mills, but I can't find out what or where they are. The pictures themselves are of no special note, so I've not included them. Were I to buy one of Mr. Scheel's maps, I'm sure they are marked.

Somewhere along the trip we visited White Post Restorations. It was a delightful experience and I recommended it to anyone whether they like cars or not. The stories behind the works-in-progress are key. One told of a man who searched far and wide for a certain model of DeSoto. He found a hulk and brought it to WPR to be restored to the specifications of the vehicle where he had proposed to his wife. He wanted it ready in time for their 50th anniversary!

This was the first time I heard the phrase: "if you have to ask how much, you can't afford it." 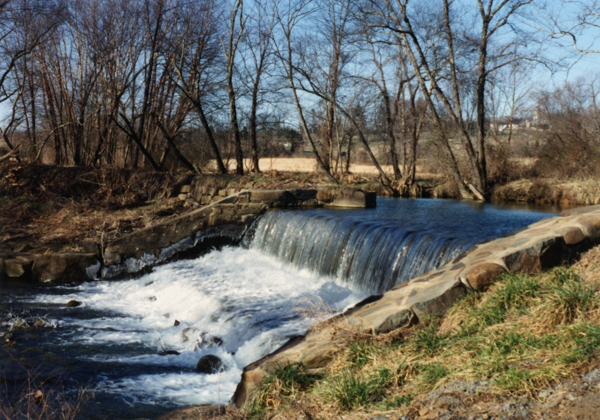 The diversion dam for the Aldie mill is on the Little River. It allowed water to be diverted into the mill race to power the mill.