In the 1990s I worked on a project called Genesis. Our assignment was  to design and implement a process by which a customer anywhere in the world calling for support at any time, day or night, would reach a knowledgeable person who could, at least in theory, resolve the problem. This was cutting edge in the days before ubiquitous Indian call centers.

It included a new software problem documentation application that was supposed to offer more and better capabilities to identify problems that had already been reported and link them to fixes when they became available. As originally conceived the program covered the existing Customer Support Organization (CSO) call centers in Australia, Europe and the US, the System Support Group (SSG) organization, which handled more complex problem definition and resolution, and the SW Development organization responsible for ultimate problem fixes. That would have been complex enough, but somewhere along the line the Customer Engineering (hardware support) organization got roped in. This added immensely to the complexity because the new problem documentation system now had to handle dispatching hardware support. It was quite a challenge!

At first I represented the Reston, VA, SSG. Later I represented the entire SSG organization. The process did eventually go live worldwide more-or-less on time and worked more-or-less well. In the meantime I spent a lot of time on the road to support centers in Germany, the UK, Austin, TX, & Cupertino. Eventually I made it to the center in Melbourne, Australia, but that was not in conjunction with the Genesis project.

This was the only time I took a camera along. I think it was the first SSG/CSO team meeting held in Europe. 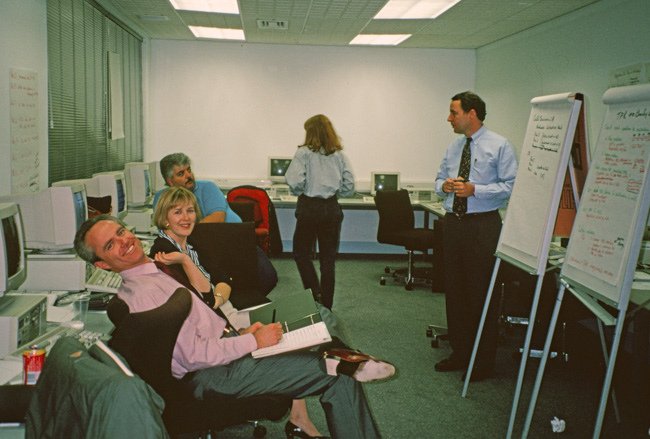 Work started at the support center in Slough, UK. L-R are Arthur Jordan, representative from the Austin Call Center, Susie White, of the UK Call Center, Mike Piccarillo, from the US CE organization, an unknown woman with her back to us, and Greg Oxton, the overall project lead.

Greg was a decent program manager but he had best-in-show skills at dining on an expense account!

I think Arthur and Mike were the only ones who made it all the way to the project's completion. 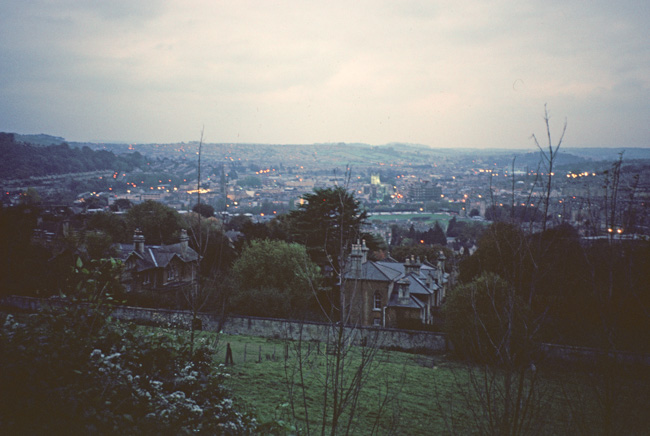 One Saturday, we decided to visit Bath. It seemed like a good idea at the time, but we worked in the morning and our train didn't arrive in Bath until the afternoon. We only had time for a loop on the tour bus – in the rain. As we returned to Slough, the entire rail system shut down. The IRA had left a bomb in one of the train stations. We transferred to buses for the rest of our journey.

Unlike bomb scares in the US at the time, the IRA really did plant bombs. This one was found and disabled.

After the project meeting in the UK, the SSG team met in Frankfurt. We took a entire weekend day off to tour the area.

I should add that, just in case it wasn't complicated enough, the entire project was targeted for ISO 9000 certification. That is why Nellie was participating. Her husband came along for the ride on this particular trip.

Bertie had volunteered to take us all for a tour of Frankfurt. 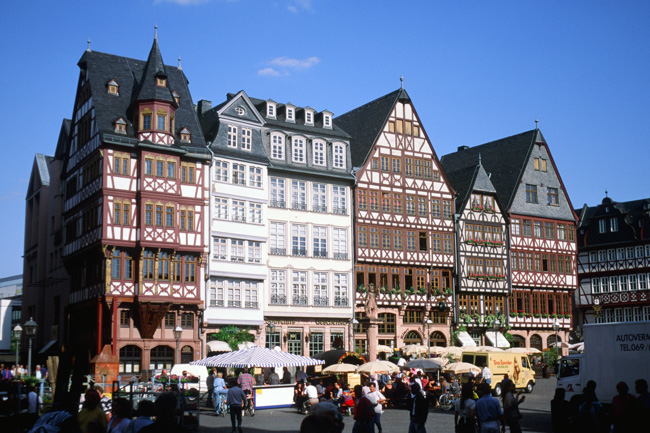 The Römerberg or main square may look medieval, but it is brand-new, rebuilt in 1986 to the original plans. Although the facades may look old, Bertie told us that the interior space is configured to modern standards. Much of Frankfurt was destroyed in WWII and like many cities it has taken a while to rebuild historic areas.

Most of the city is unabashedly modern. 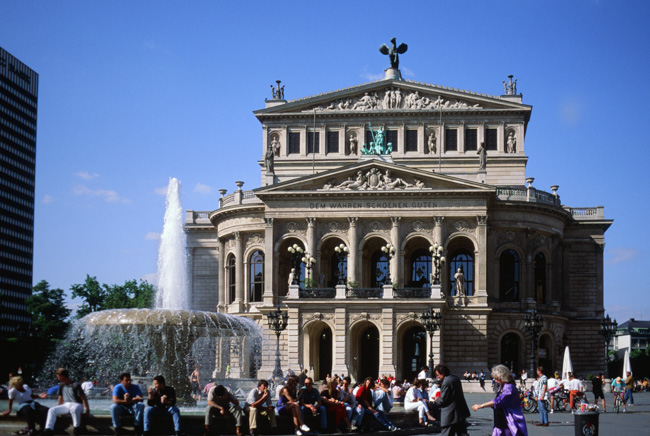 Likewise the old opera house, completed in 1880, had been destroyed and rebuilt.

The legend above the arches reads: the true, the beautiful, the good. 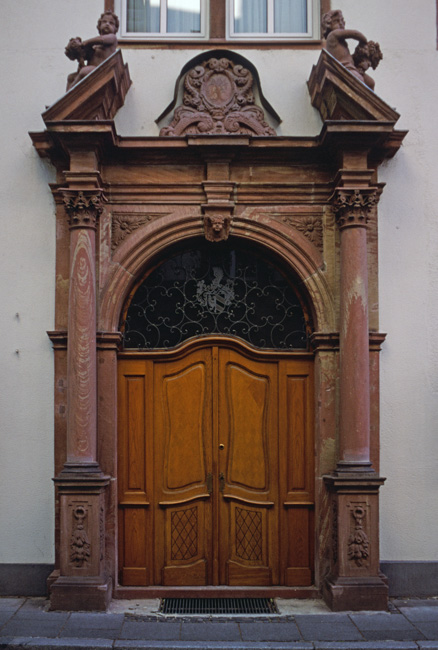 I'm a sucker for doors. I took pictures of several, but I liked this one the best. I don't know what it belongs to or if it was also reconstructed. 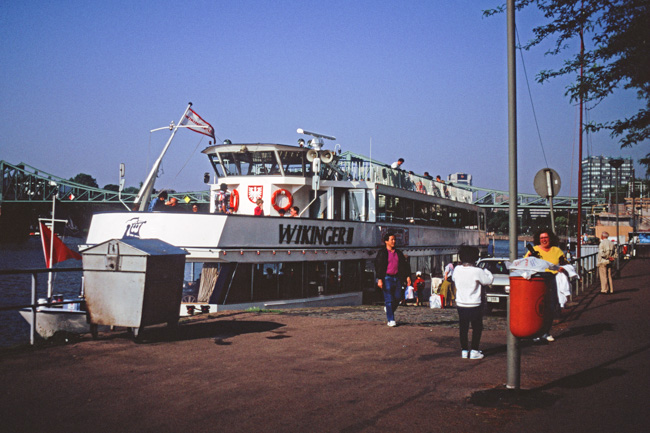 Part of our afternoon was an excursion down the Main River to the Rhein. The ship, Wikinger II, has had quite a history (there are web sites devoted to tracking ships through name and ownership changes). As of 2005 it was being used as a floating restaurant in northern Germany. 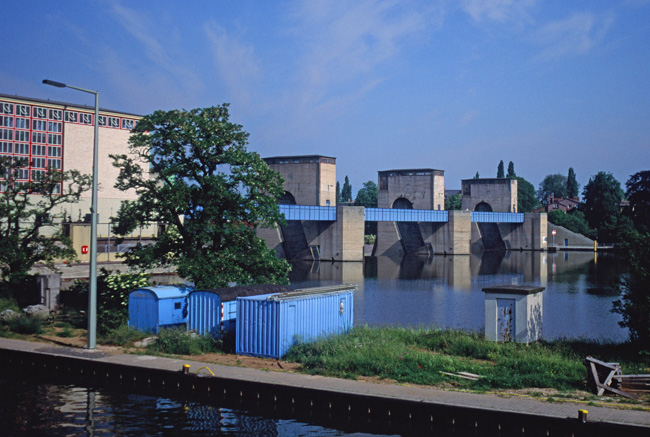 As we traveled down the Main toward the Rhein, we passed at least one lock. This dam can be raised or lowered to manage floods.

In 2017 we traveled along the Main again as part of a cruise across Europe. I was disappointed that we passed Frankfurt at night.

In 1993 the Rhein-Main-Danube canal had just been completed. 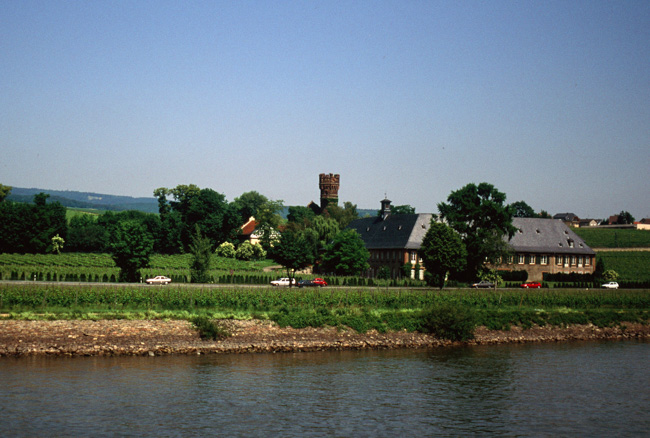 Cheryl was eagerly anticipatingb a "real castle." This was the first Schloss that we passed, but it wasn't castle-y enough for her.

Nope, this didn't do it either. 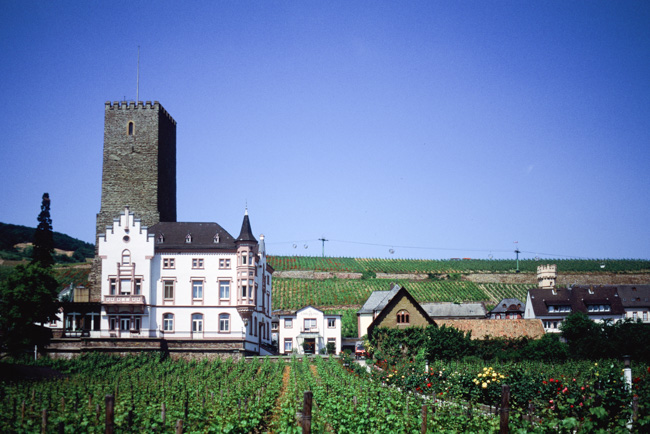 This was as good as it got. Although it didn't have a moat, it did have a tower. The is the Boosenburg and it is a genuine castle,

She was disappointed none-the-less.

We took a gondola over the vineyards above Rüdesheim am Rhein to visit the Niederwalddenkmal or monument to the unification of Germany. 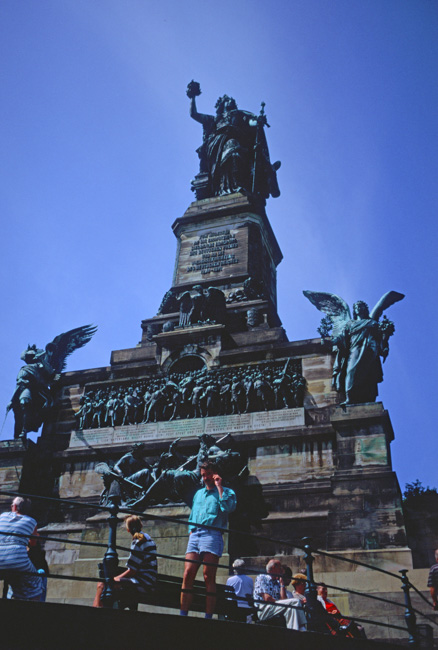 The monument was constructed beginning in 1871 to celebrate the "unification" of Germany (including Alsace-Lorraine, a goodly chunk of Poland, and a bit of Lithuania) after the end of the Franco-Prussian war. After Germany's defeat in WWI, Alsace-Lorraine returned to France, Poland was reconstituted, and Lithuania regained some territory that Russia had annexed.

It's hard to believe that Germany is a relatively new construction and not all the German states welcomed unification and subsequent domination by Prussia. We could still see this tension during our recent cruise through southern Germany.

The words of a German anthem are carved on the monument. It extols the watchers guarding the Rhein to make sure it remains a German river.

After our visit to Rüdesheim we returned to Frankfurt. We were jet-lagged and tired. Nellie konked out on deck and so did Bill. Nellie snoozed mostly in the shade. Bill got a bad sunburn! 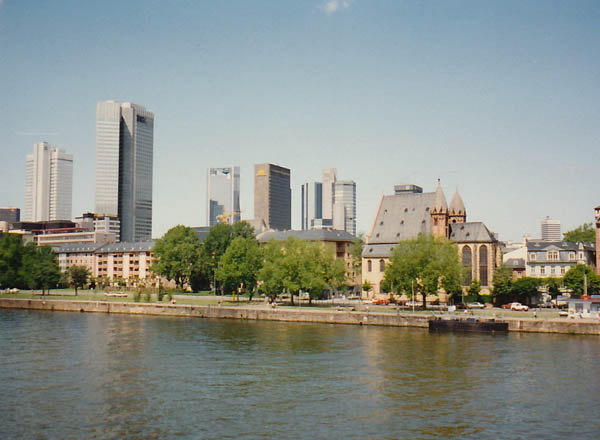 Frankfurt from the river. 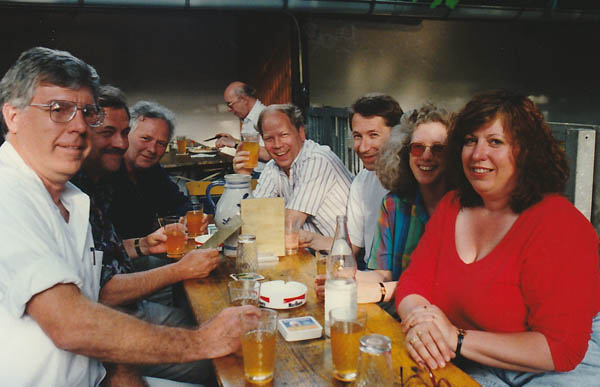 One other afternoon we visited an eatery serving local specialties. Some of them must have been an acquired taste.

The Genesis experience was a pretty intense one, but I got to know a lot of really nice folks. Even though international travel sounds pretty cool, we didn't get much free time. It was just one office building and computer screen after another.