There actually was some skiing at Mt. Hood, but we hadn't brought any of our equipment, so it was just a visit to see the historic Timberline Lodge. After spending the night, we visited waterfalls along the gorge. I don't have many pictures of the gorge itself because it poured the entire day -- not uncommon for Oregon. I hope it was snow at the higher elevations! 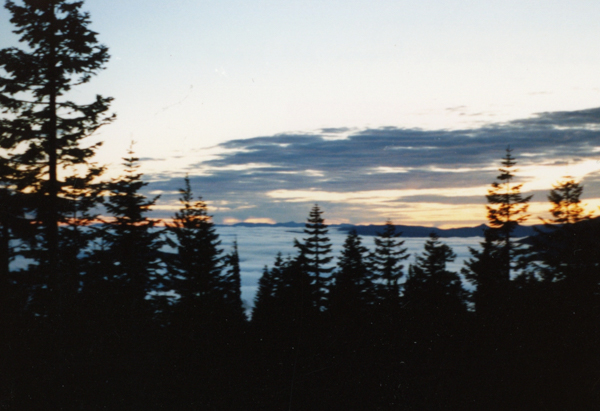 We reached Mt. Hood just as the sun was going down. Heavy fog had rolled in to the valley beneath. 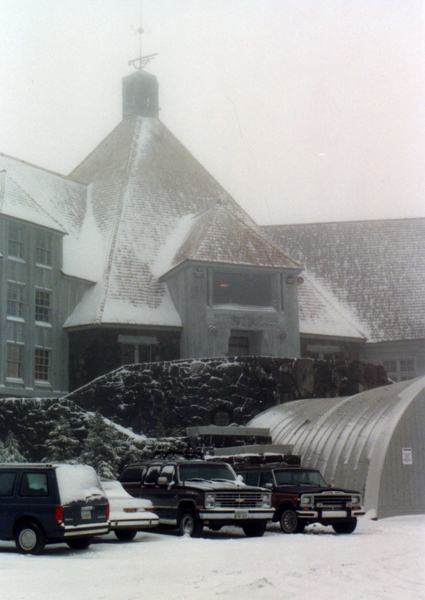 By the time we reached Timberline Lodge it was socked in and snowing. The weather is changeable in the mountains!

We had recently seen the film The Shining, which used Timberline for the exterior, but not the interior, representation of the malevolent hotel. The interiors were based on the Ahwahnee, another historic hotel. Even though we knew that the interior of Timberline would be different, it was still a shock to see how compact and different the interiors were. There are a number of pictures at the Timberline link above -- check it out. Everything was hand-crafted and beautiful.

The hotel featured a video describing its history and how it was used to employ many out-of-work artisans during the Depression.

It was a wonderful place, but the guest rooms were very much of its era. Don't expect a Hyatt Regency!

I remember our meal there as being particularly delicious and I seldom remember meals! 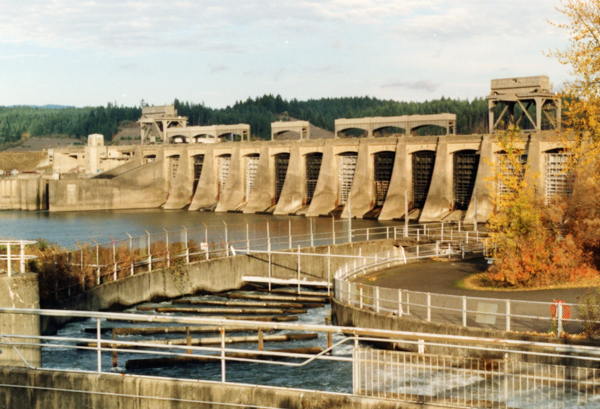 The next morning we drove to the Columbia River. Our first stop was the Bonneville Dam. The extensive fish ladder is in the foreground.

I want to visit the Grand Coulee Dam much farther upriver than the Bonneville Dam, but we've never been able to work it into another excursion. A river trip on the Columbia and Snake rivers is on our to-do list, but hasn't made it to the top yet.

The power turbines are beautiful in their way. This is the original powerhouse. An additional one was added shortly before our visit. 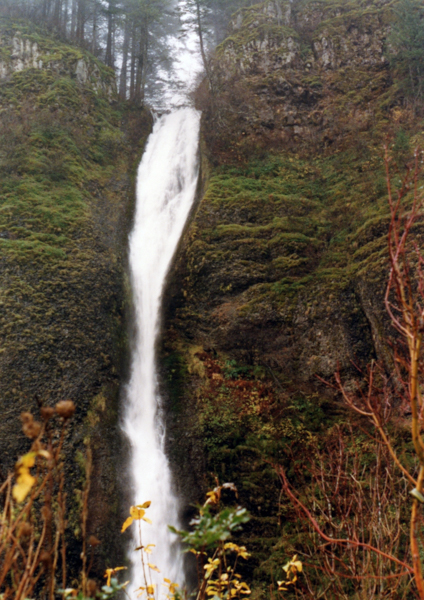 As we travelled down the historic Columbia River Highway, we stopped at several waterfalls (there are many more).

I'm pretty sure this is Horsetail Falls. If digital photography has done nothing else, it allows enough images to take pictures of identifying signs. I was always too stingy to waste FILM on such things.

I remember getting soaked walking back to the falls. I believe that I purchased a new waterproof jacket as soon as we got home. 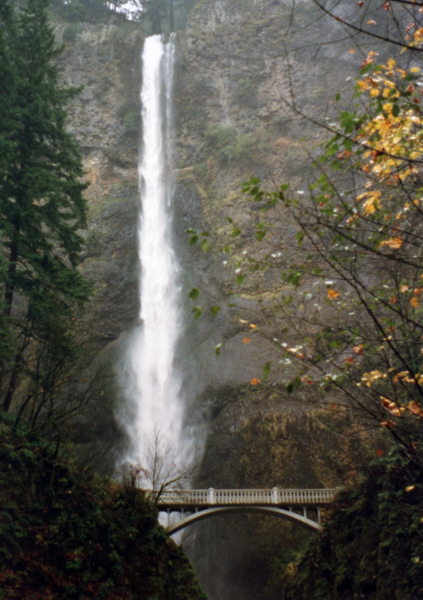 There is no question but that this is Multnomah Falls. This is the upper part. A picture of the lower part can be found at the link.

When we visited a few summers ago, people were packed onto that bridge. In the November rain we had the place to ourselves. 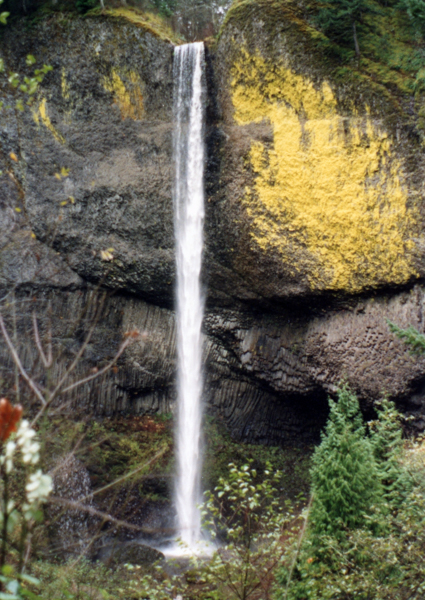 Our final waterfall was Latourell Falls. It is the only plunge type fall in the gorge.

Crown Point and Vista House overlook the Columbia River Gorge just to the east of Portland, which can barely be seen through the haze in the center of the picture.

Vista House was dedicated in 1918. I don't believe that the interior was open to the public at the time of our visit or I would remember more about it. Wikipedia has a few pictures of the interior. 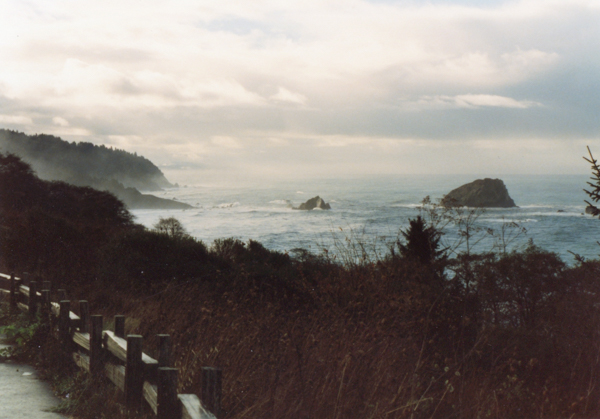 This was also the year we took a day out from wine tasting to drive over to the Oregon Coast. I can't remember which roads we took over and back (there aren't many and some are closed in winter).

One memory that stuck with me from the drive to the coast, if not the coast itself, is how much we liked Oregon because it reminded us of Virginia. I think this is when we decided that we'd get back east if we could. And we did -- three years later.

We didn't get much of a ski vacation in Oregon that year, but we did have a great trip.