Saas-Fee is in the valley east of Zermatt, not far from the Italian border. Like Zermatt it does not allow private automobiles in town. 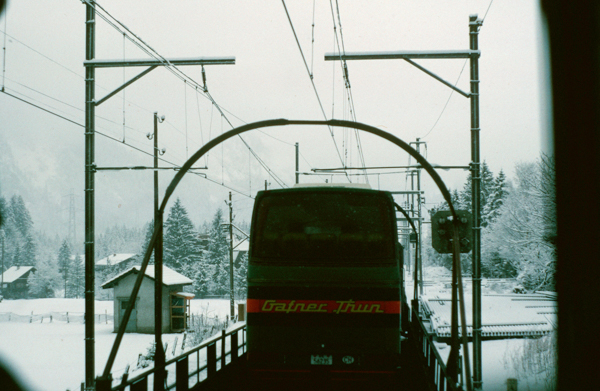 But first we had to get there. The most direct route was through the Simplon Railway Tunnel where bus & car traffic was put onto flatbed cars to be hauled through.

There was a significant delay at the tunnel. Our bus had no functioning toilet so there were some unhappy campers, but we all survived. 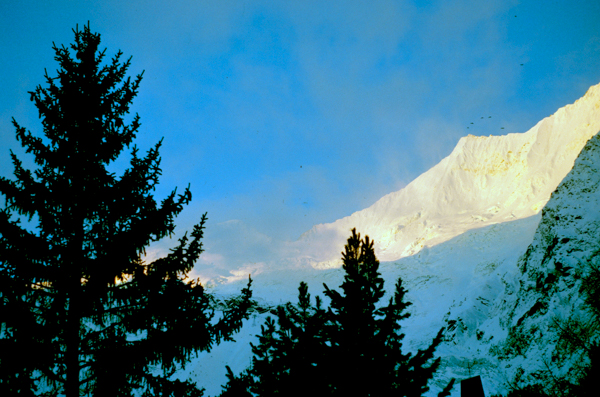 Our first day the weather was miserable: pea soup. Jim and I elected not to ski. One of our friends, Ray McKinley, did and injured his knee, for which he had to travel back to Geneva for treatment. For many years Ray wrote a column for our newsletter called "The Knee," which features an Ace-bandaged knee for the logo. I wonder if he got the inspiration from this trip.

This picture was taken at sunrise and the mountains were pink. When the slides were digitized, I guess the worker thought the color needed to be "corrected" because this is how it came back. 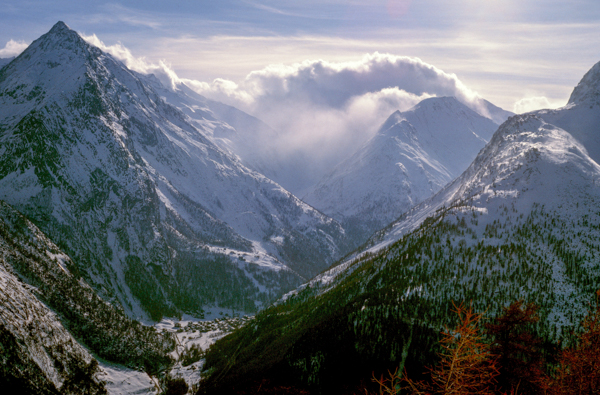 As usual we spent one day puttering around doing other things than skiing. We took a lift to sled runs and winter hiking trails with stunning views, such as this one across the valley to Saas-Almagell.

This village was very much in the news at the time as the home of Pirmin Zurbriggen, who won gold & bronze in 1988 at the Calgary Olympics and who also won the 1988 World Cup overall title. 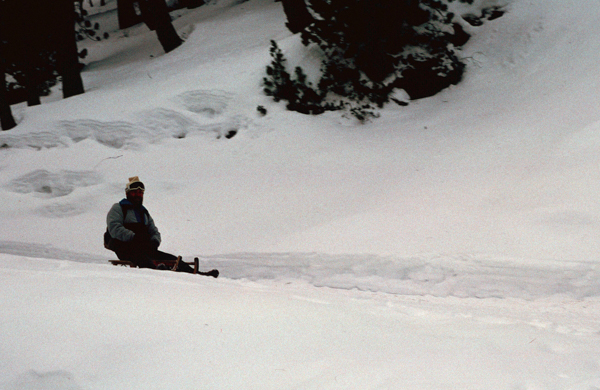 We've had great fun at Austrian resorts on their "rodels." The Swiss equivalent is called a schlitte, which is the generic word for sled.

We rented a couple for our expedition, but the runs weren't as steep (or as fun) as in Austria, and we ended up walking most of the time pulling the little sleds.

Austria has Switzerland beat hands down in the sledding department!

Like Zermatt there are no cars or trucks allowed in Saas-Fee. Therefore most of the "streets" are suitable for walking around although in the busier parts of town electric jitneys were very intimidating.

Some of these buildings are storehouses. Others are winter quarters for the cattle. The nose knows for sure which is which.

One of the local specialties is Rösti, a potato dish like hash browns (only better). The sign translates to: The Craziest Potato House in the World. 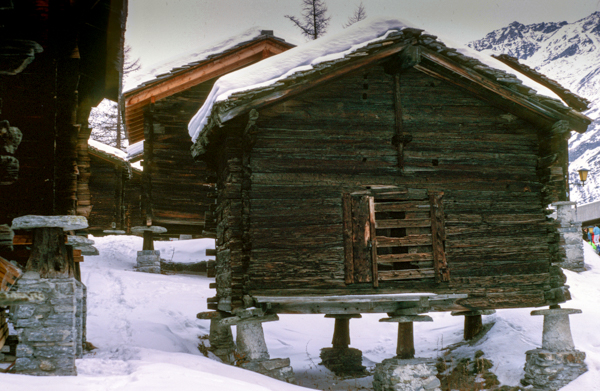 Some typical storehouses. The mushroom-shaped supports keep vermin away from the stored food.

They look like a strong wind would knock them over, but they've obviously been standing quite a while. The one in the back has a brand-new roof.

These are called "raccard" granaries. 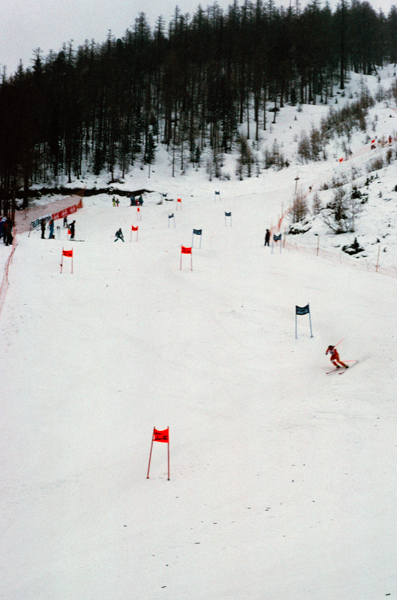 While we were in Saas-Fee there was a World Cup race. We took another day off from skiing to watch. The best part was the course preparation. Courses are iced to firm up the snow. Helicopters with big perforated bags like sieves hovered over a huge pool of water at the base of the run. After the bags filled with water they buzzed up the slopes with the water dribbling out.

One of the helicopter pilots must have learned to fly in the military because he was a wild man, swooping in to dump his bucket sideways and taking off again with a roar. 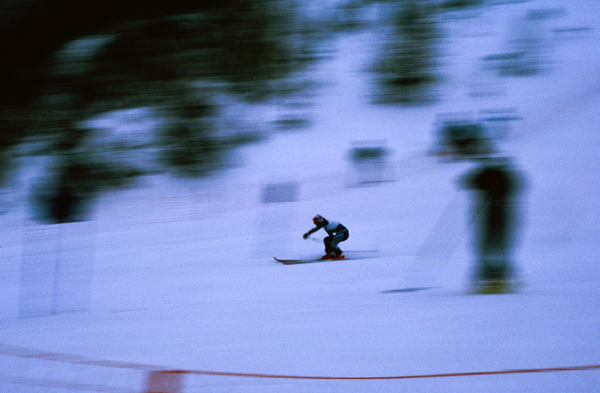 A closer up view of a racer. It looks like not even the racers were wearing helmets at this time.

The note on my slide says this was the women's downhill. 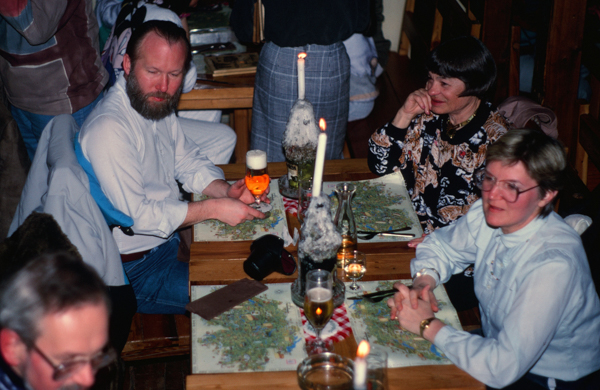 One night we all went out to a local restaurant. It was our first experience with raclette. It was certainly not the last! 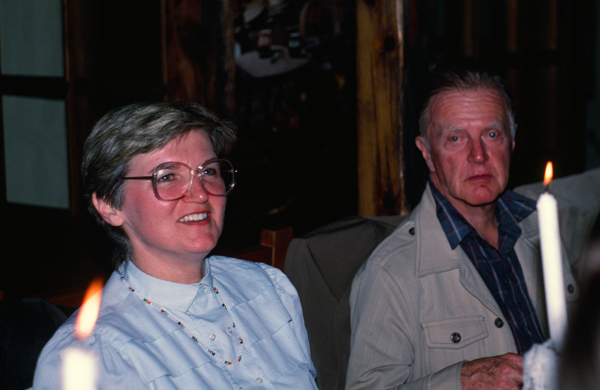 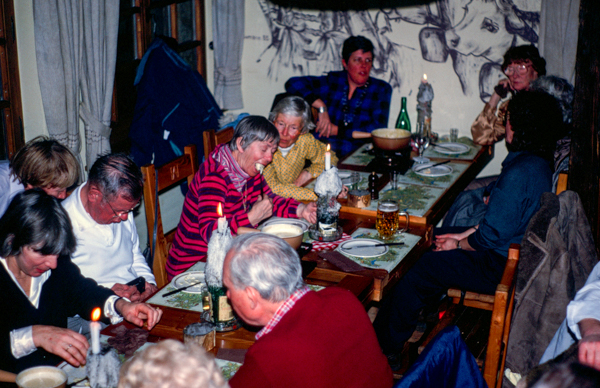 Clockwise around the table are: Someone I don't know, Margaret Wyckoff over Bob Wyckoff's shoulder, Shirley Rettig, Eleanor Peterson, a friend of Eleanor's whose name I don't recall & June Kelsey. I can't tell who the woman is next to June. The man at the bottom with his back to the camera is Steve Grenlenski. 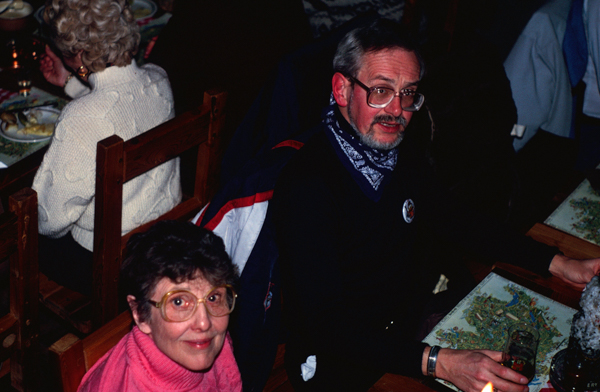 PVS was and remains a great group of friends.