After two weeks in Switzerland we spent several days in Paris. We enjoyed it even though Paris is not one of my favorite cities (and I'm not a particular fan of cities). For me the most memorable experience was attending Sunday School and church at the American Church in Paris. 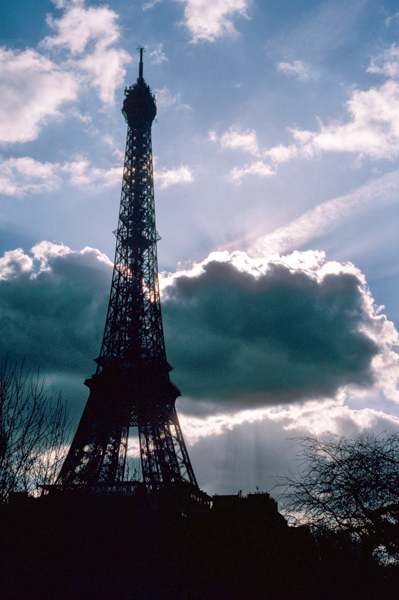 Our first stop in Paris was the Eiffel Tower. We had been to the city before, but had never visited this iconic site. 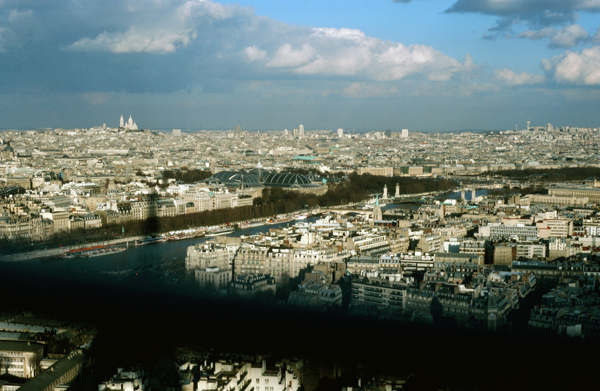 You get a good view of the city from the first stop.

The domed building in the middle is the Grand Palais. The Tuileries Garden is on far side of it. (Our hotel was on the far side of the garden from here.)

The Basilica of Sacre Coeur is visible on the skyline.

You can see the shadow of the tower in the photo. 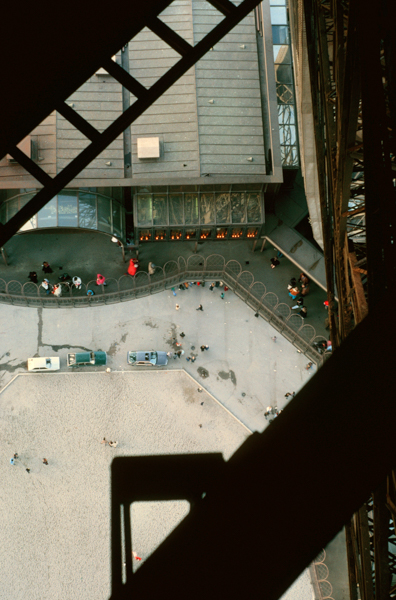 This picture is from the second level looking down to the first and then the ground below. Just looking at the picture gives me vertigo! 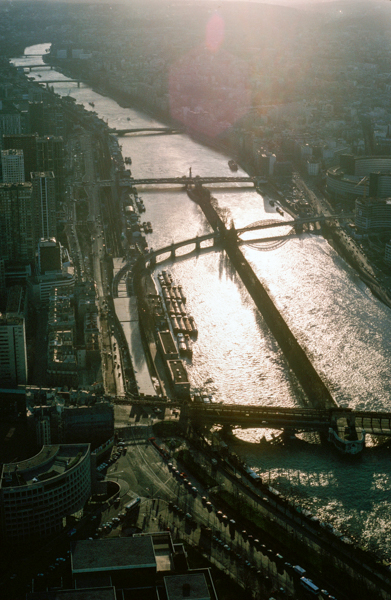 This is the Seine, looking in the opposite direction from the picture above. It is getting late in the day, but I loved the light on the river.

The island in the river is called Iles des Cygnes. It is an artificial island with a walkway along its length. There is a one-fourth replica of the Statue of Liberty on the island. 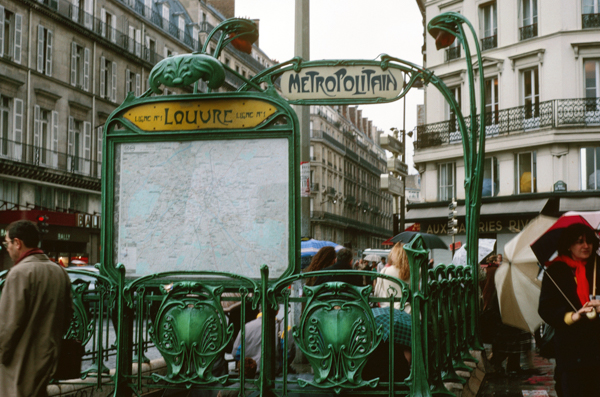 One of the Art Nouveau entrances to the Paris subway system. 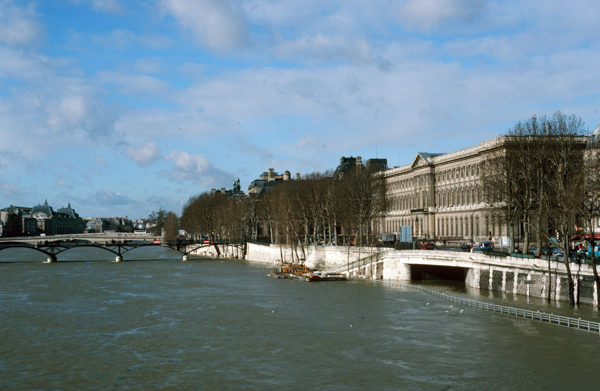 The Seine was at flood stage during our visit. This road running under the Louvre was completely flooded. 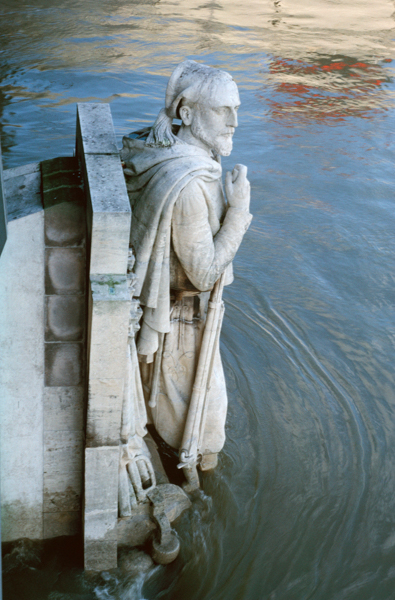 This statue of a Zouave is on the Pont de l'Alma across the Seine. He informally indicates the severity of the flooding. Since the water hasn't reached his thighs, the river is still navigable. The bridge originally had four such statues, but only this one remains after reconstruction in the 1970s.

We signed up for a river excursion that advertised narration in French, English & German. The guide chattered away in French and we gathered he was informative and amusing based on the reaction of our fellow passengers. The English and German narration was recorded and was on the order of: "We are now passing under the Pont Neuf." Gee thanks! No matter, it was a nice cruise.

Diana, Princess of Wales, was killed in a tunnel near here and there is now a memorial near the bridge. 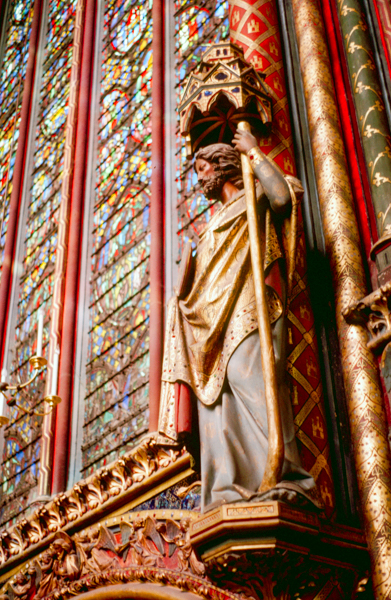 We visited Sainte-Chapelle, built in the 13th century by Louis IX (St. Louis) of France. Much has been reconstructed, but the windows are original. 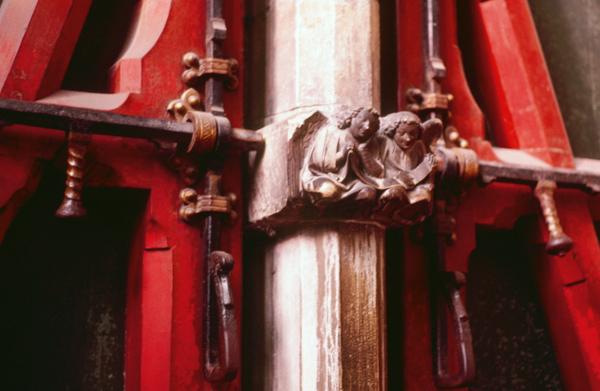 It was magnificent from the stunning windows to the smallest carving: 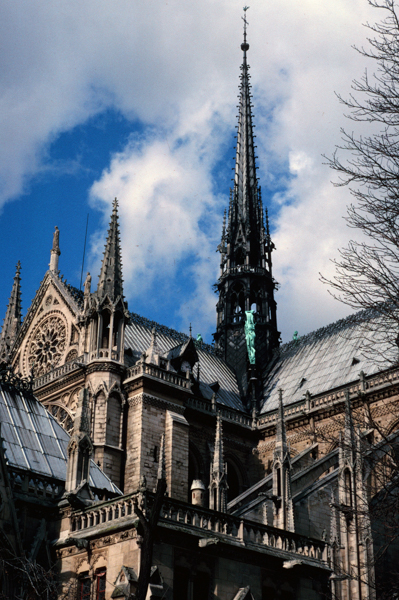 We also visited Notre Dame Cathedral. The outside is spectacular, but the inside is (was) humdrum.

There were earlier places of worship in the vicinity, pagan and Christian. In the 12th century church leaders decided to build an entirely new structure in the then-cutting-edge Gothic style.

Construction continued during the 12th to the 14th centuries. There was a restoration project in the 17th century, but during the French Revolution much was destroyed.

The cathedral was restored in the mid-19th century. At that time the installed windows were monochrome. They were replaced with modern colored windows in 1965.

Maintenance and restoration have been ongoing, but in 2019 fire destroyed the roof and central spire. As of this update (2020) it is still not clear if the cathedral can be saved. 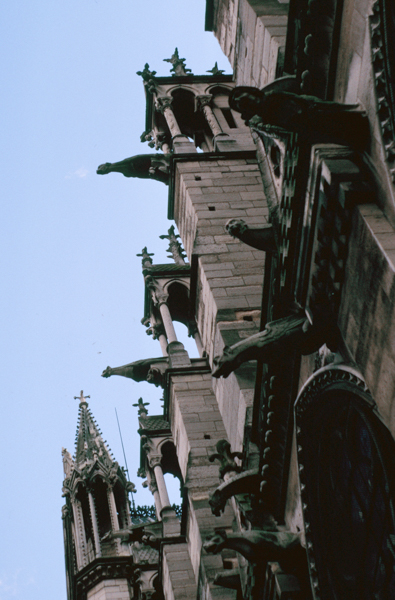 Gargoyles have to be the best part of any Gothic cathedral.

We visited another downtown church quite by accident. We were walking past Saint-Germain-des-Pres when we heard organ music. We went inside and stayed for quite a while. It wasn't a recital – just someone practicing. Exquisite nevertheless. 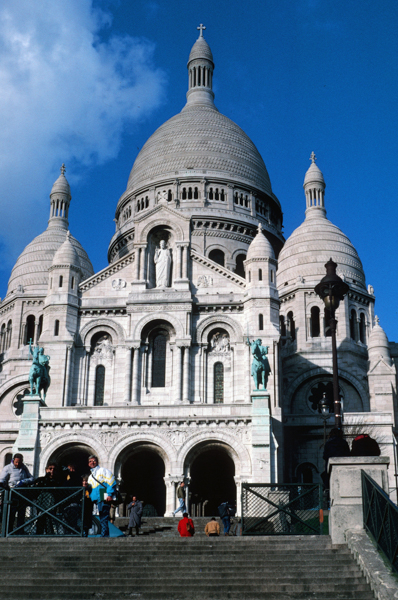 Our final Parisian church visited on this trip was Sacre-Coeur on Montmartre. As I recall its exterior also trumped its interior.

As we walked from the nearest Metro stop, a shady looking character began to follow us. At one point Jim told me to keep walking while he turned to face the guy. The shadower suddenly remembered that he had to stop off in a neighboring shop.

In another scary instance young thugs singled out fellow skier Steve Grenlenski in the Metro. They thought he looked like an easy mark. They were wrong. We don't know when he picked up his defense skills, probably the military, but he sent them packing. 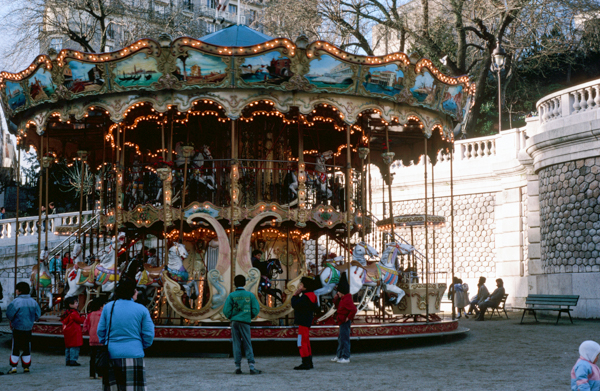 The plaza below Sacre-Coeur featured this two-level carousel. I've not been able to find out anything about its history. 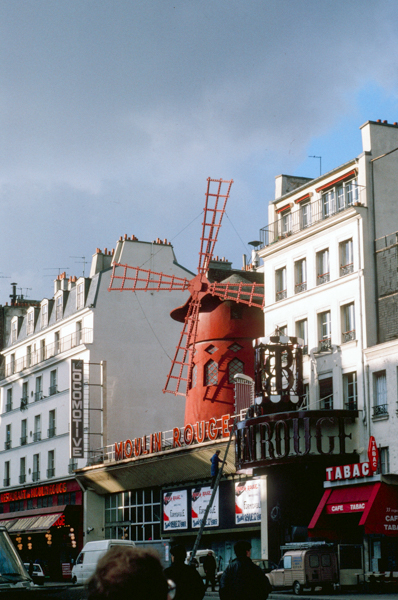 Of course every visitor to Montmartre has to take a picture of Toulouse-Lautrec's Moulin Rouge.

We didn't otherwise visit it as it looked like a Class A tourist trap. I was very uncomfortable in this neighborhood. Based on info from the WWW it has improved in the past 25 years. 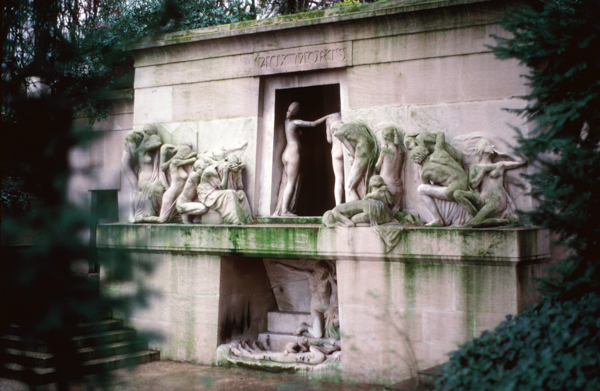 Another stop was the Pere Lachaise cemetery. I'm fond of cemeteries and this has the reputation of being one of the world's finest. We didn't take the time to find Jim Morrison's grave, but there were a number of interesting monuments.

This, the monument Aux Morts, is the entrance to an ossuary. Grave sites are leased rather than purchased. If the lease is not renewed, the remains are exhumed and the bones stored in catacombs here. The site is then reused.

Somewhere on the WWW I had found an explanation of the iconography, but I can't find it again. Oh well. 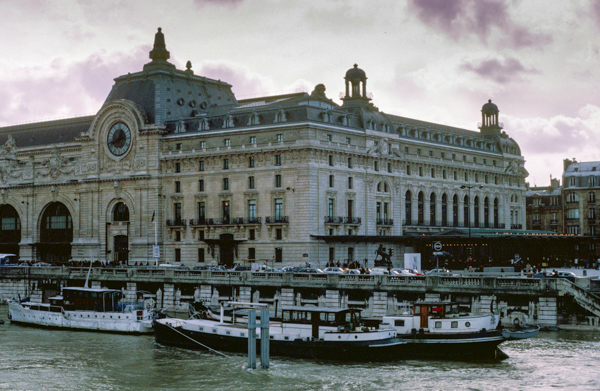 We also visited the Musee d'Orsay. At the time it had only been a museum for a couple of years. What a great way to repurpose a graceful old train station. 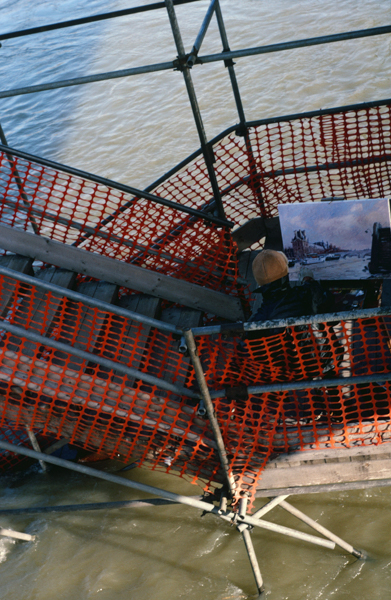 A fitting last shot of Paris. We saw this artist tucked in this flimsy-looking perch over the flooded Seine. He was bundled against the cold and busily painting the river scenery.