Interlaken means "between the lakes" in German. The two lakes, connected by the river Aare, are Thun and Brienz.(Sherlock Holmes fans will be interested to know that the Reichenbach Falls are nearby. The falls are not accessible in the winter. I checked.)

There are several ski resorts in the area, so Bob & Margaret housed us centrally in Interlaken itself at Hotel InterLaken. The original guest house dates from the 14th century. It was renovated in in the 15th century and has been used as a hotel ever since.

Some of the rooms were named after famous people who had stayed there such as Lord Byron & Felix Mendelssohn.

Our room was on the back side of the hotel; I don't recall if it had ever been occupied by anyone famous or not.

We reached Grindelwald, located at the base of several of the ski areas, by cog railway (more on that later). I wish I could show here the lilting way that the name was pronounced in the local Switzerdeutsch dialect.

We visited during the week of the annual World Snow Festival drawing artists from all over the world to produce snow sculptures.

The lack of snow the year we visited meant the sculptures were less elaborate than usual. 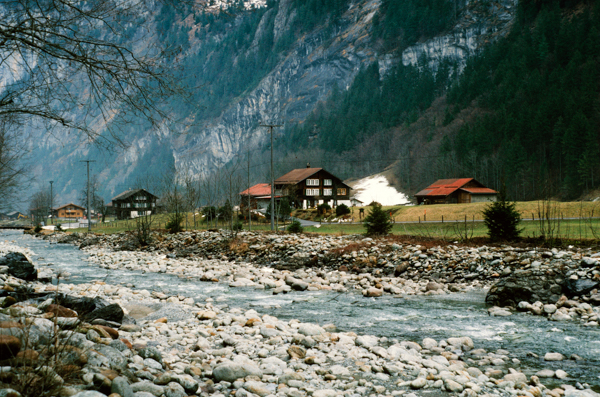 One day I was battling a cold and couldn't ski, so I rode the rails and hiked along the valley from Lauterbrunnen to Stechelberg. The path led along the Weisse Lütschine River. The Schwartze Lütschine joins up with it at the aptly named village of Zweilütschine (Two Lütschines). Nowadays the river (after the junction) is a whitewater destination. 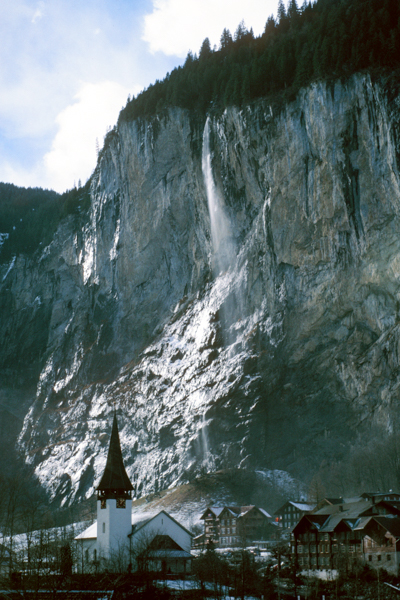 The valley was a narrow rift between these massive cliffs. Every now and again I heard a CRACK! and saw a rock loosened by freeze-thaw cycles come crashing down. I did not attempt to get close to those rock faces. 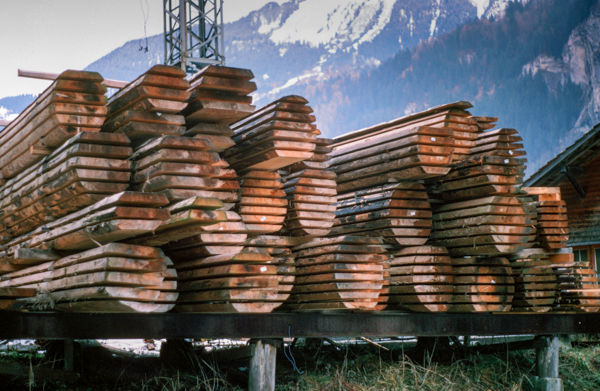 Logs cut into boards and left to cure have a sculptural quality. 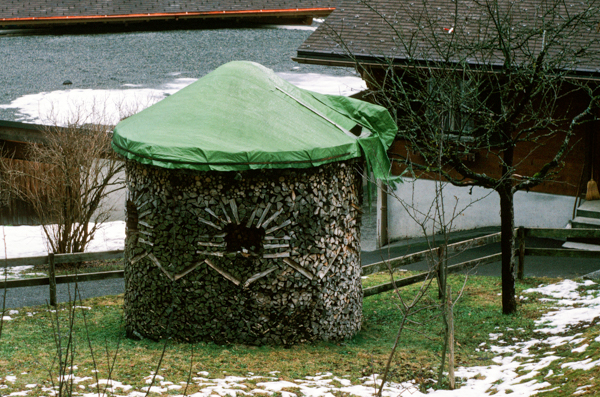 I don't know if this is a storage shed for something or just a fancy way to keep cordwood.

We noticed that the Swiss were meticulous in maintaining their forests. When we passed through the woods on our trains we saw stacks of wood along the track that had been salvaged from downed trees. Over the next day or two the stacks disappeared, presumably collected by some train or the other. Perhaps they ended up like this. 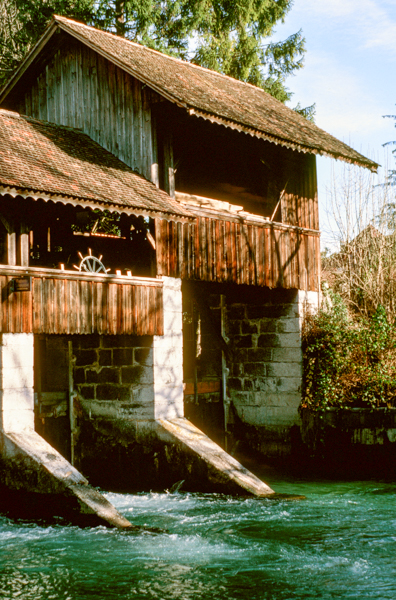 One day we had to do laundry. Instead of a self-service laundromat we found a laundry where the proprietor washed and folded clothes for a modest fee. We were startled that she charged separately for the "spin cycle." In fact she had a centrifuge that she loaded with wet laundry. It spun vertically and had a tendency to walk along the floor unless she sat on it to stabilize it!

After leaving our laundry with her we walked around Interlaken. These 19th century sluice gates control the flow of the River Aare between the two lakes and mark the border between Interlaken and neighboring Unterseen.

At one point of our trip I ran out of dental floss. My German dictionary had no equivalent, so I composed a little speech about how I had to clean my teeth and headed down to the local pharmacy. The young woman patiently heard my plea and immediately responded: "Waxed or unwaxed." Just about every Swiss we met spoke English.

The German for dental floss, by the way, is Zahnseide. It translates as tooth silk. If I asked what the German was for "waxed," I don't remember the response.

The Unterseen town square is highlighted by the town hall. The town was in the process of putting LAN connections in all the downtown buildings. This was 1988! Local Area Networks were cutting-edge technology at the time.

The Interlaken and Unterseen villages began to develop side-by-side in 1279. (Both names mean "between the lakes.") There was a large stone gate between them with the date carved above the arch. I don't recall if the gate actually dated from that time or not. 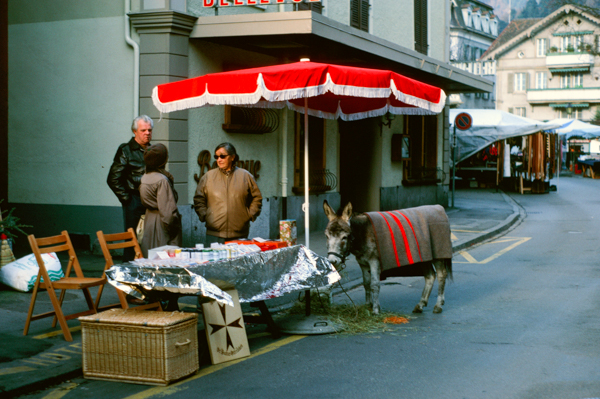 There was a street fair in progress in Interlaken on the day we were exploring. This burro was quite charming.

I have chairs identical to the ones shown here and still use them from time to time.

After a delightful week in Interlaken, we packed up and clambered onto the bus for the trip to Saas Fee.