Rather than fly to Washington to travel with the group, we flew to Geneva from California. Our plan was to fly to Geneva from San Francisco via Los Angeles and Paris and then spend several days in Geneva. We wanted to see the city and we also had friends who lived there. It was an eventful flight and provided us with great travel stories.

Event #1: Equipment problems delayed our flight from LA to Paris several hours. We heard it was the captain's last trip before retiring and he wasn't taking any chances!

Event #1A: While we waited in LA, someone somehow set fire to a trashcan in the waiting area. This was before the most paranoid days of air travel so at least the entire airport didn't have to be evacuated!

Event #2: Due to the delay we missed our connecting flight in Paris. Air France put us up overnight at an airport hotel.

Event #2A: On the way to catch the hotel shuttle, we got lost and ended up on the wrong side of passport control. The only way back was to run down an "up" escalator with our carry-on bags. We were convinced that we would be caught and thrown in jail, but we weren't. We contacted our hotel in Geneva to let them know that we would be arriving a day late.

Event #3: Being seriously jet-lagged the next morning, I left my purse, with our passports, in the taxi that took us from the Geneva airport to our hotel. Neither the hotel nor the American consulate were bothered about this. "It'll be at 'Lost and Found' at the train station." On our way to 'Lost and Found,' we ran into the taxi driver who was on his way to deliver it. Everything was in order. We had to force a "thank you" tip on him as he simply felt it was his duty. (I'm sorry to say that in the decades since Swiss society has become less honest.) I have never since been allowed to carry the passports or anything else of much value.

Unfortunately I don't have any pictures of our friends and their house, which was across the border in France. They had investigated building in Switzerland itself but ran into any amount of hassles. The French were much easier to get along with, and cheaper to boot. 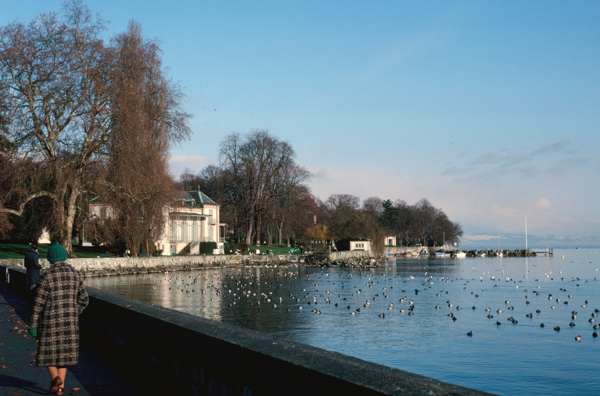 We enjoyed a beautiful day walking around the city. Our hotel was close to Lake Geneva.

The cryptic note on the slide says "Benefactor's Tomb." The monument, in the Jardin des Alpes adjacent to the lake, was built for Charles, Duke of Brunswick, who was exiled from his home in Germany, and later moved to Geneva. When he died in 1873, he willed his fortune to the city on the condition that it build a replica of the Scaligeri family tomb in Verona in his honor.

One source says that there was some controversy at the time over accepting the money, but the city apparently decided that money talks. 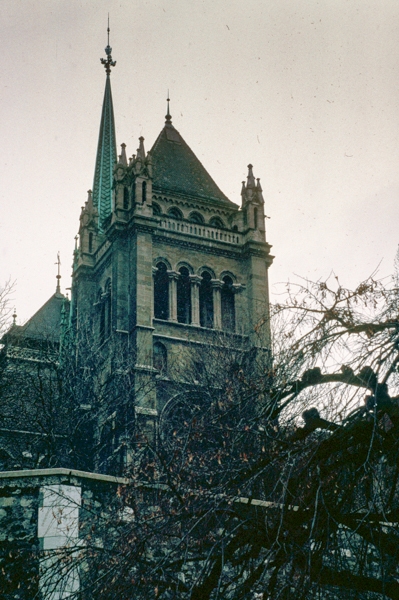 John Calvin worshipped at St. Peter's Cathedral, built in the 12th century although much altered since then.

We visited an archeological site on the grounds.

After this time on our own, we took the train to the airport to meet our friends arriving from Washington. Their flight was less eventful than ours.