In 1986 I accepted a transfer to Tandem Computers' HQ in California & Jim transferred to the USGS research program in Palo Alto. We were off to California with all our worldly goods, two cats and a pregnant horse. We settled in to our new jobs & lifestyle. My boss must have been pleased with my work because he nominated me to be a "manager host" at the 1987 Tandem Outstanding Performers (TOPS) gathering in Tucson, AZ. There was only one hitch. The event was very close in time to the April 4 due date for my long-anticipated baby horse. Although I appreciated the honor, I tersely informed my always-patient boss that if the foal hadn't been born, I wasn't going to go. Luckily everything happened to schedule and we were able to attend. Tucson was the home of Al-Marah Arabians, which had owned or bred many of the new baby's ancestors. We didn't get to visit on this trip, but did later with significant results.

The TOPS programs rewarded Tandem's outstanding contributors and were held in desirable, but not overly expensive, destinations. Some that I recall include Marco Island, FL; Hawaii; Calgary, BC (for the stampede); and Washington, DC. Spouses (or any other significant other) were included because the company president and originator of the idea, Jim Treybig, felt that families made sacrifices that enabled employees to succeed. Some of the activities were geared toward team-building and such-like, but many were just for fun.

At first only individual contributors could be nominated for TOPS. Managers only attended as "hosts," and we were expected to focus on making sure all of the workers had a good time. Nevertheless it was a great honor. In later years Treybig recognized that managers were also worthy of individual recognition and thus were eligible to be nominated. 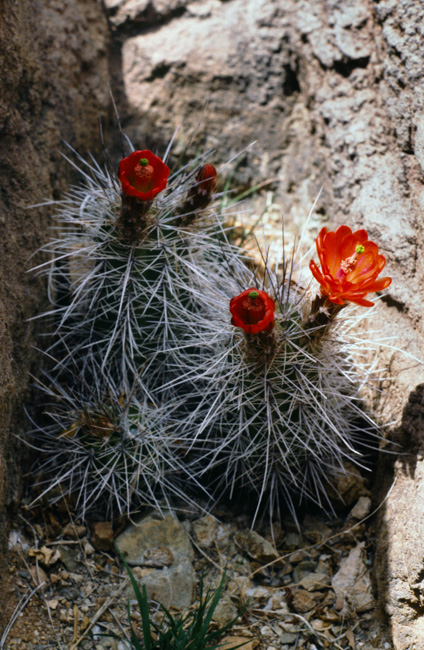 The first day we visited the Arizona-Sonora Desert Museum. I have been there many times and it is always a fascinating place to explore. 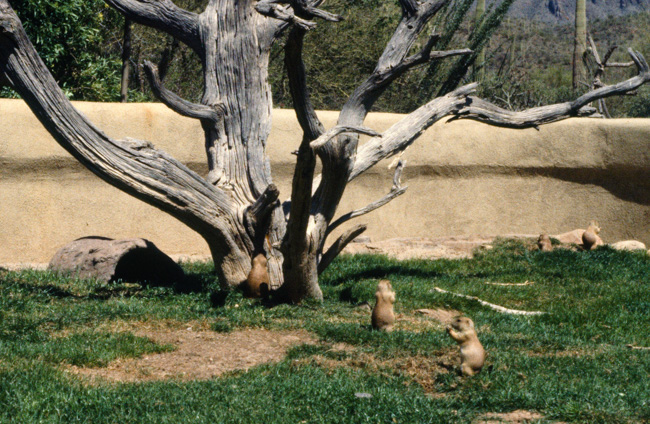 In addition to plants the museum has an extensive collection of native desert animals. 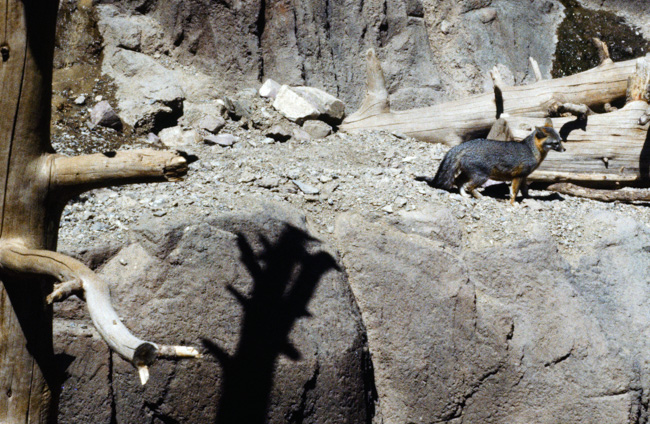 There are walkways throughout the desert plantings. 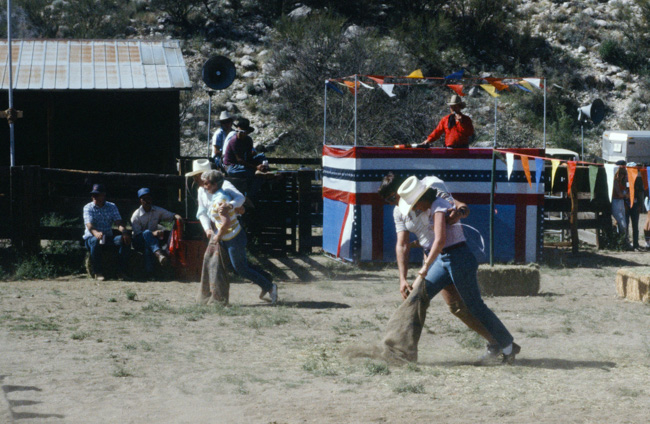 At a different location we had a kind of "rodeo" that featured events such as this three-legged race. Other events included a variety of chug-a-lug games. Tandem was not the place for a tee-totaler ... or an alcoholic. 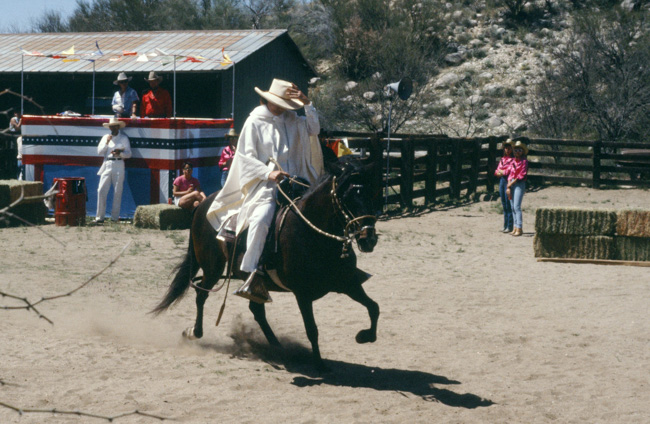 My favorite event of that day was this demonstration of a Peruvian Paso. This mare was some kind of national or international champion. She was quite lovely. 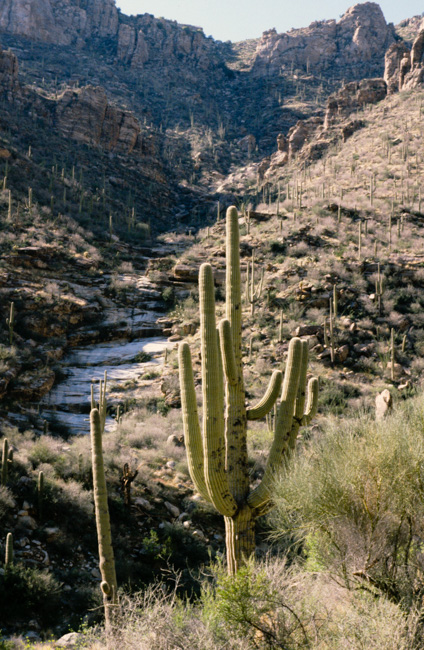 The desert that surrounds Tucson is the primary home of the saguaro cactus. They are found everywhere. They are protected in Arizona and may not be removed or harmed without a permit.

This arroyo shows evidence of water runoff during rainstorms. A colleague who had moved to Phoenix was highly offended once when no one showed up a party he and his wife had planned because it rained that night! I think he was only slightly mollified when everyone explained that the hazards of flash floods were even more dangerous than the snow and ice storms we have in Virginia. 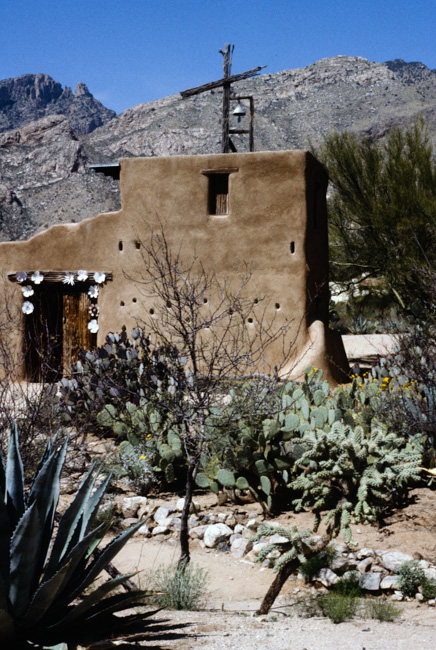 The Gallery in the Sun was built by artists Ettore "Ted" and Marion DeGrazia. This is the "Mission" building. 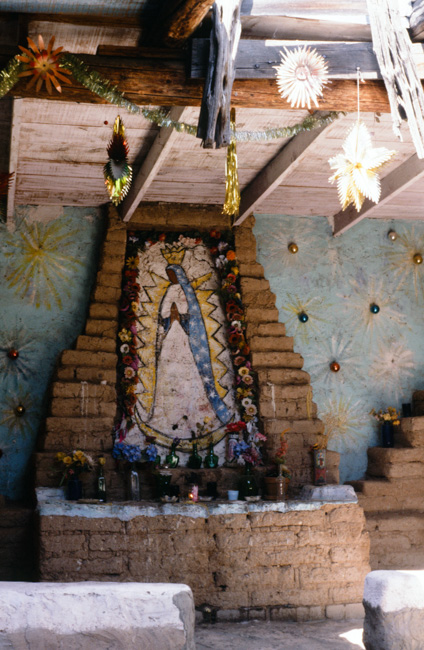 The altar in the mission has this depiction of Our Lady of Guadalupe. 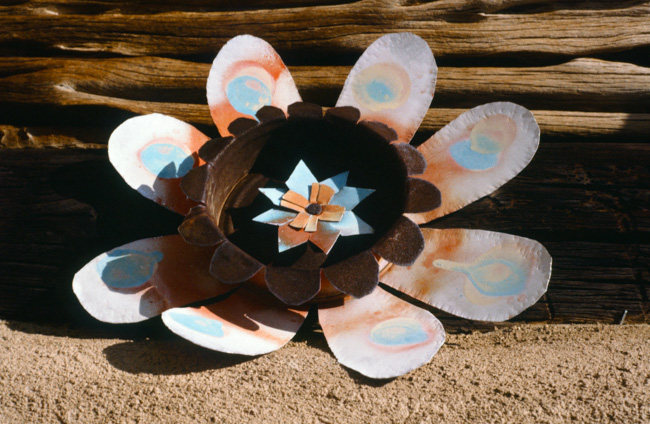 Metal flowers of all shapes and sizes festooned the buildings.

Well prior to this visit Jim had bought a De Grazia oil painting of a roadrunner that he kept in his office. When he retired, he gave it to a colleague. 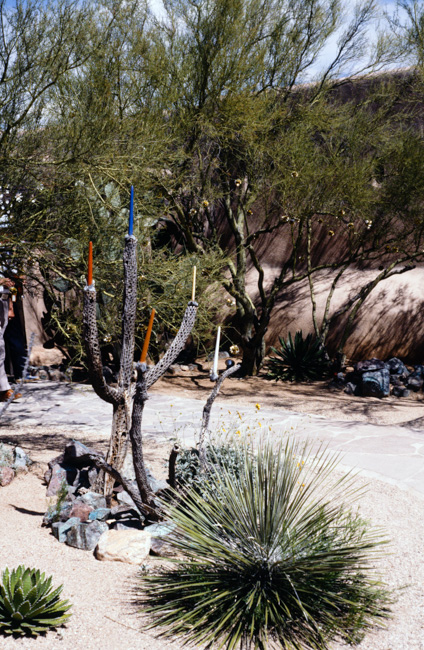 There were many whimsical touches around the gallery such as this cactus skeleton that has been turned into a "candelabra." 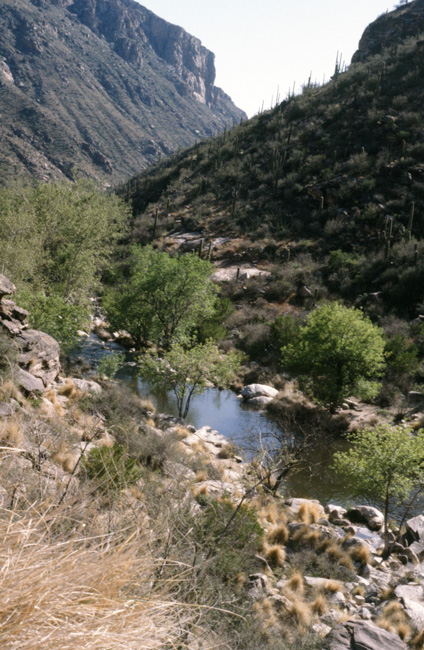 Another excursion was to Sabino Canyon. This is another Tucson landmark that we've visited numerous times. It never palls.

The creek running through the canyon is Sabino Creek. 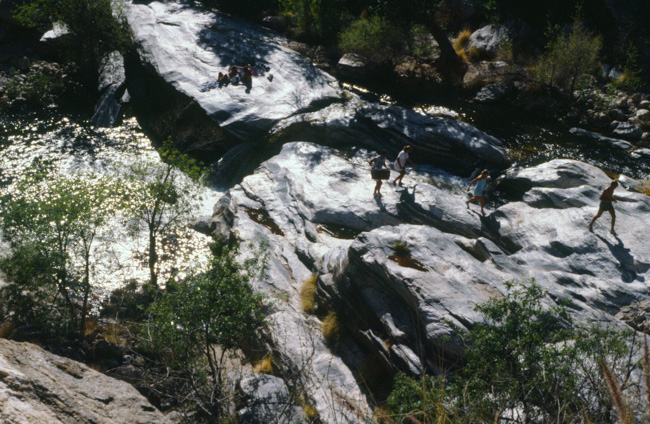 The creek is a popular recreation spot. I'm sure the water is quite cool compared to the desert heat. it's a common sight to see families picnicking here and there along the creek.

We took the tram up to the head of the canyon planning to walk back. Unfortunately I had worn moccasins without soles and the roadway was very pebbly. I think I made only one tram stop before giving up on the walk. 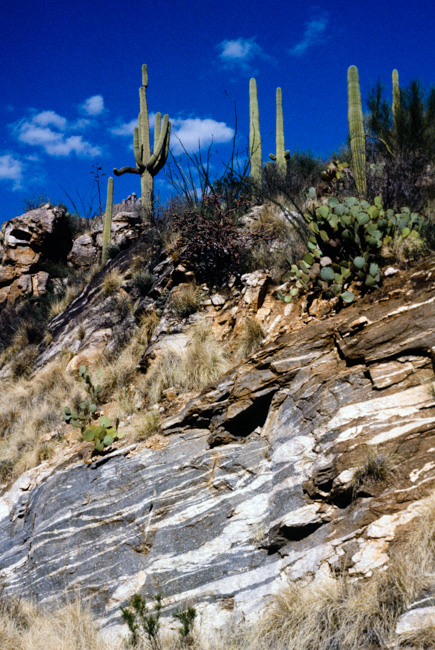 We enjoyed our visit to Arizona.

There were many other activities. For example, Tandem rented the entire Old Tucson facility and staged a rodeo demonstration. My favorite memory from that time was the announcer joking that you could always identify the bull riders waiting to compete: they were the ones up-chucking behind the bleachers!

It was a fun time. The TOPS program was one of the many things that distinguished Tandem from "ordinary" companies. It was open to all levels of the organization from file clerks to senior engineers, although as mentioned above, managers weren't eligible until later years. What a privilege to have worked there for so many years!