When we were picking a cruise we had some tradeoffs to make. The two places that we would have liked to visit but didn't were Sitka and Glacier Bay. I don't know what we missed in Sitka, but I can't imagine that Glacier Bay would have any more spectacular sights than what we saw. 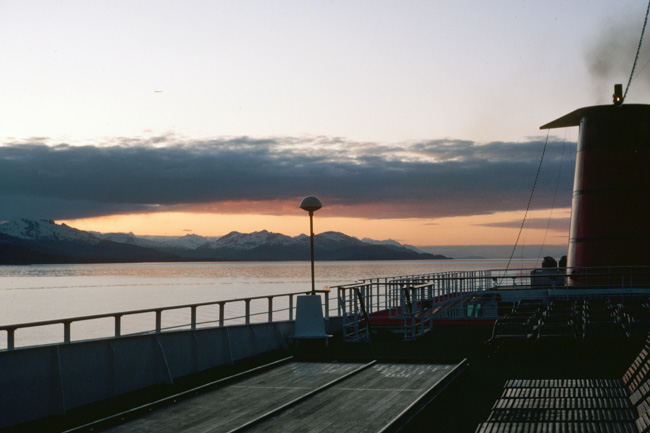 As we leave Skagway we are cruising the last of the Inside Passage. By the next morning we'll be in the Gulf of Alaska.

After almost a week on the water I've gotten my "sea legs" and no longer had any problems with mal de mer – not that we encountered any rough water.

Our first "stop" was Yakutat Bay where we saw the Hubbard Glacier. It is the largest "calving" glacier in North America – larger than Rhode Island – and in contrast to most mountain glaciers continues to advance in the face of global warming. 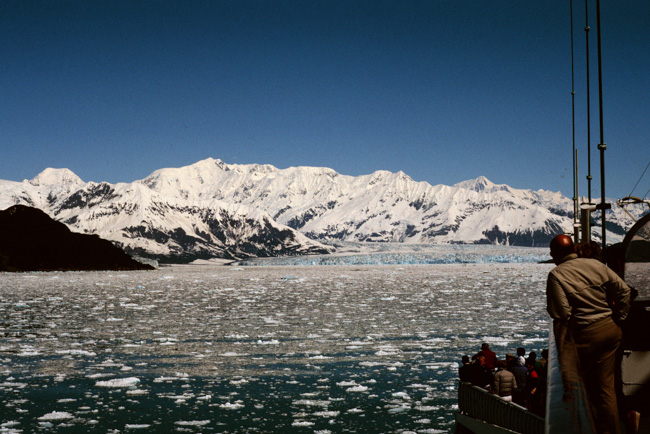 As we neared the glacier we began to see many small (and a few larger) ice chunks. There are a variety of terms to describe ice floating in water depending on its size, composition, and origin. What we are seeing here is "brash ice."

Based on scientific data this glacier grows and shrinks out of phase with the climate. For example it retreated during the Little Ice Age (14th through 19th centuries). 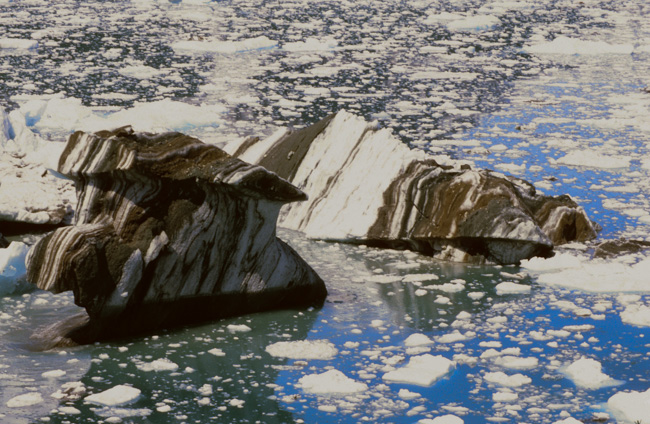 This might be a "bergy bit." The included dirt and rock shows that it came from the glacier rather than frozen seawater. 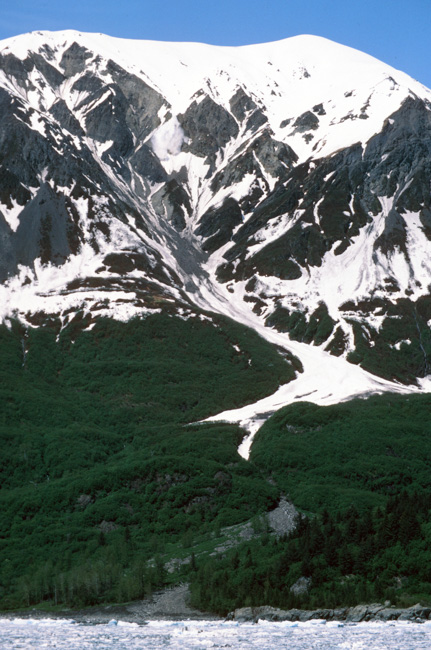 This appears to be the out-flow from a massive avalanche. Based on the path through the trees it is a fairly common occurence.

Valleys such as this were created by glaciers that have long since vanished.

We have left Yakutat Bay and proceeded to Prince William Sound. Here we find Columbia Glacier.

Unlike the Hubbard Glacier it has been in rapid retreat since the 1980s. Click on the "play" icon at the above link to see the animation. It starts at the same time we visited, 1986, and continues to 2019. The change is dramatic! 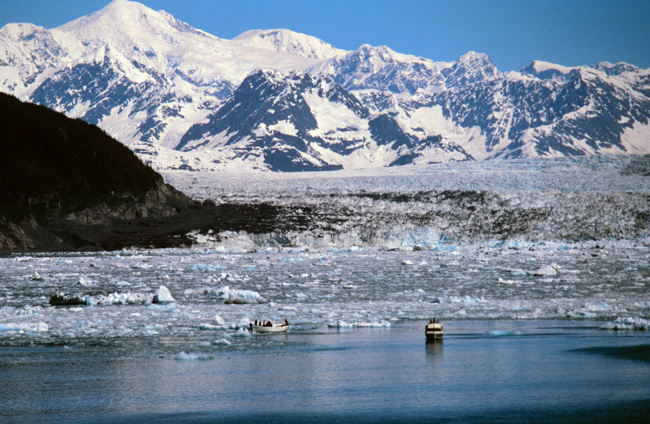 The left-most of the two boats seen here was launched from our ship. It is collecting glacial ice to be carved for decoration. 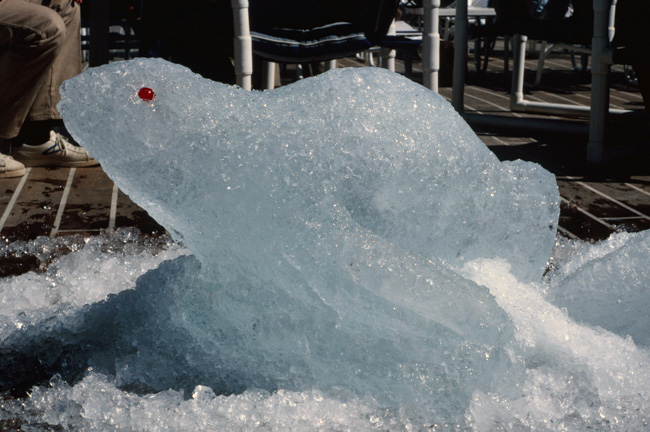 The resulting seal. Nice touch with the cherry eyes. 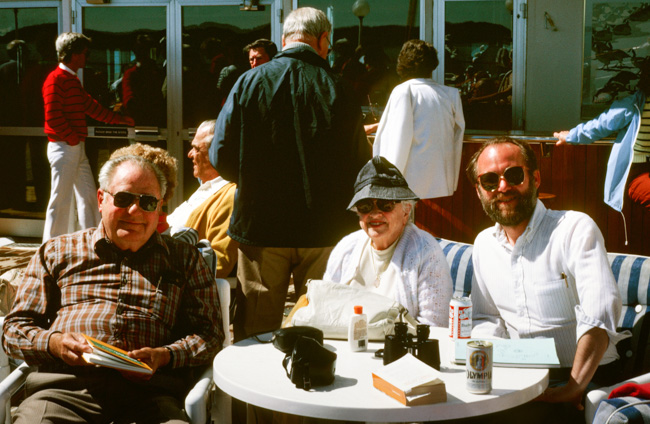 Later we enjoyed the warm sun while cruising Prince William Sound. As I recall most of the time we were on the ship it was pretty chilly. 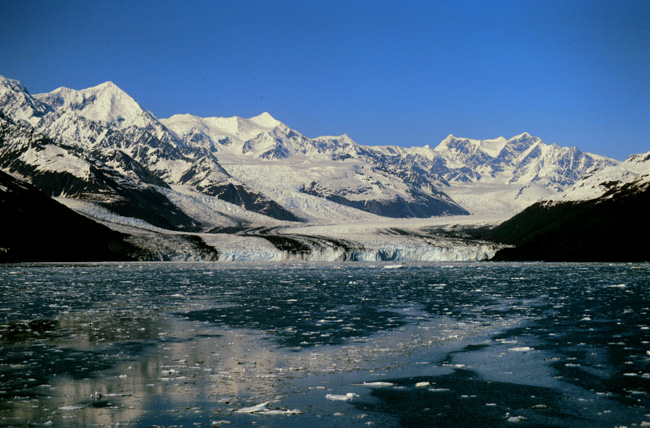 Next we visited College Fjord. (The glaciers here are all named after US colleges.) This is Harvard Glacier. It is another calving glacier that has been advancing since the early 1900s. According to the USGS, all such glaciers: 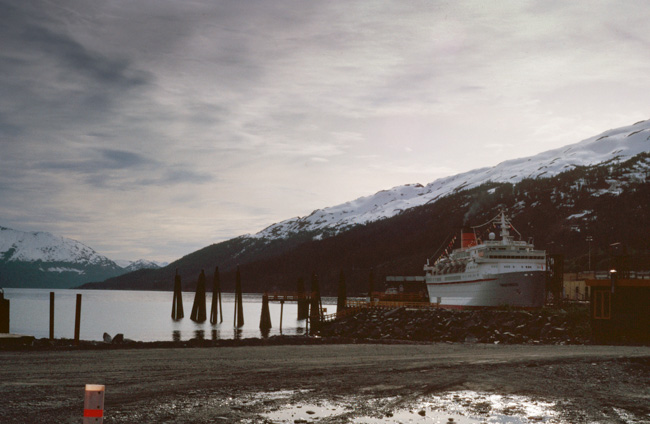 Not long after our visit to College Fjord we arrived at Whittier where we bid goodbye to the Cunard Princess. We took the train from Whittier to Anchorage where we spent the night.

The following morning Jim & I said goodbye to my parents. We were continuing on to Fairbanks and they were headed home to Mississippi. It was a wonderful trip and a great time together.