During our cruise we had found the weather pretty brisk. That was about to change. The weather in inland Alaska may or may not have set records that year, but it was hot! We hadn't come prepared for a Mississippi mid-summer (or even a Virginia mid-summer) so we were melting. I distinctly recall that the temperature was in the 90s, but the historical records only show it was in the 80s. Whatever! We had a great time. 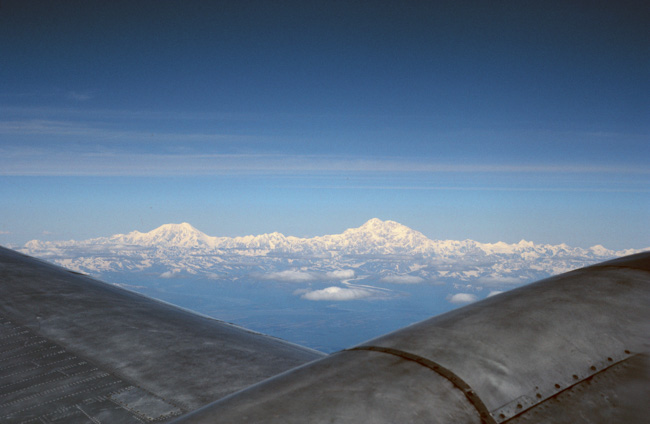 We flew from Anchorage to Fairbanks. Since Denali (Mt. McKinley) is notoriously shrouded, I took the opportunity to take this photo of it. We couldn't be sure we would see it again.

There was a sad story here. A group of two or three couples had an assigned table next to us on the ship. We thought they were loud and obnoxious and were dismayed to hear that they planned to continue on to Fairbanks.

We were even more dismayed when one of the group had a heart attack and died on the flight! I'm now glad that they were having such a grand time together. You never know....

One of the excursions was this sternwheeler on the Tenana River. Riverboat Discovery is still in operation. This boat is the Discovery II. They have since added a Discovery III. 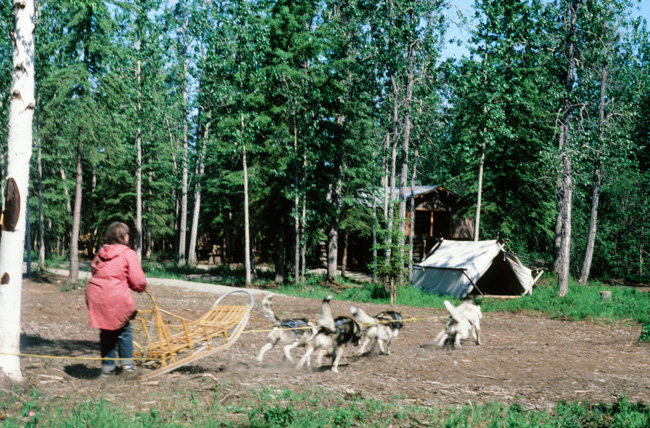 At one of the stops we were treated to a demonstration of sled dog training at the kennels owned by Susan Butcher, four-time Iditarod winner (the first time in 1986, the year of our visit). As shown here the dogs can be conditioned even when there is no snow. The trail is covered with bark to make the sled easier to pull. 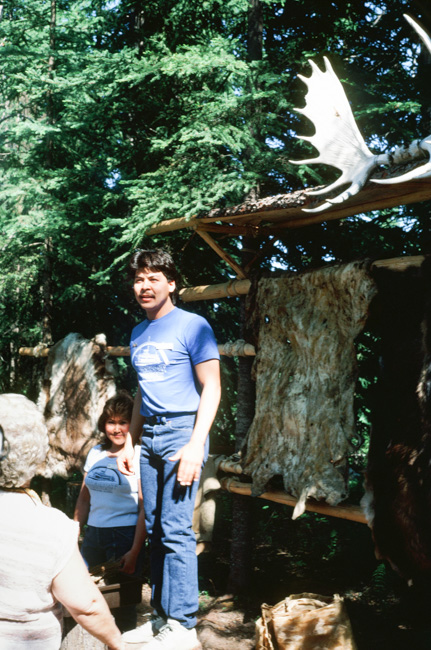 Another stop on the tour was at the Chena Indian Village. This young man is describing the various techniques used to tan hides.

The village is a re-creation intended to illustrate traditional ways. One of the buildings had an "Alaskan refrigerator," which is a hole dug into the permafrost.

The Native Americans in this area are an entirely different culture than in the southeastern Alaska region we had just visited. These folks speak an Athabascan language related to the language spoken by the Apaches of the southwestern US. That's a pretty wide spread. Even though the languages are related, the particular languages may be as different as, say, English and Italian. 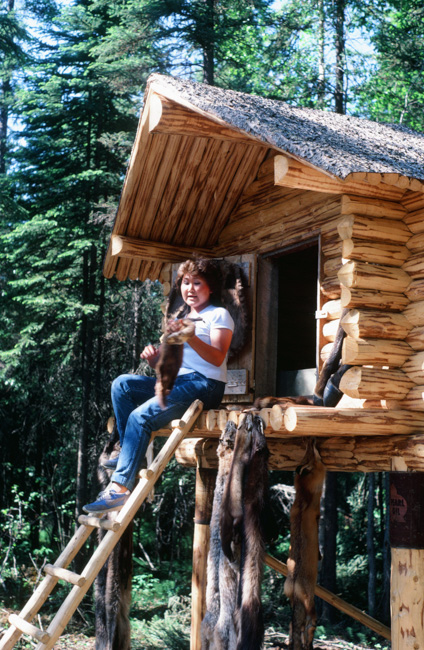 This young woman demonstrates a food cache used to protect food and fur pelts from marauding bears and other animals. 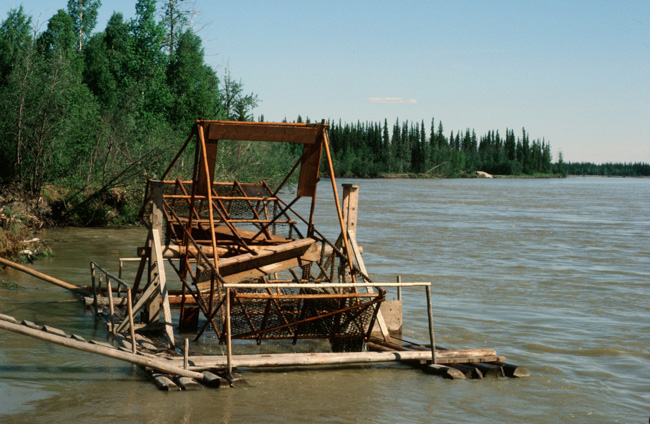 We also visited a fish camp where the native peoples caught fish to preserve over the winter for themselves and their dogs. I had forgotten how this fish wheel or fish trap worked, but of course there is now a demonstration on YouTube (ignore or skip the ad). 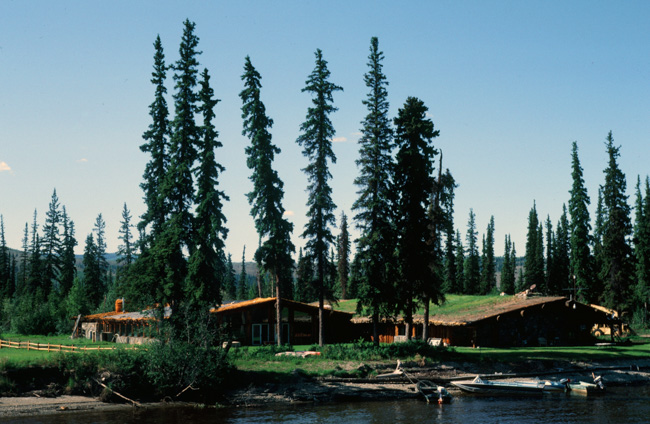 The note on my slide says this is a "Large traditional house." I'm not sure how traditional it really is, but notable features are the log & stone construction, low profile, large overhang, and sod roof, which would aid in insulation. The left-most section is just now getting roofed. I expect this house would be cozily tucked into the snow during the winter.

Note the boats tied up in front. There are no roads. Travel is all by river (or air). 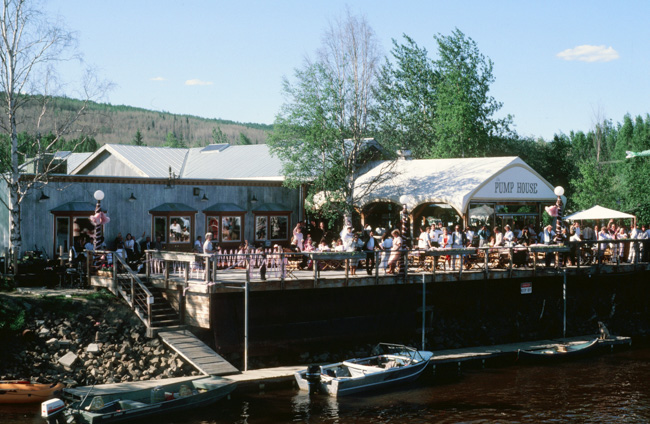 Many of the patrons of this lively pub came by river. 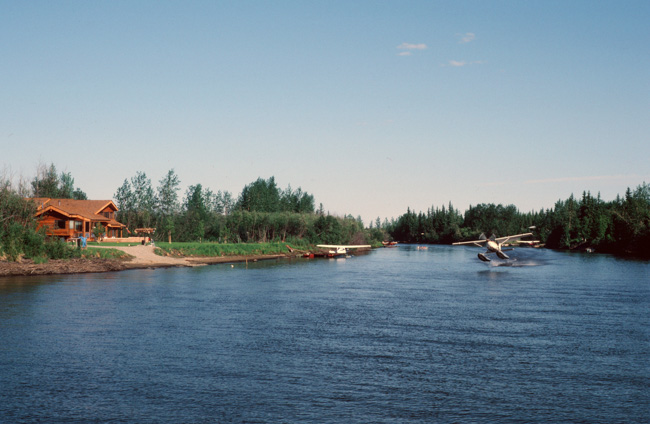 Our guides emphasized that of the "streets" in this area are the river. People get around with boats, such as those above, or airplane. Note the plane parked in front of the house on the left.

Many houses had both a boat dock and a hanger. 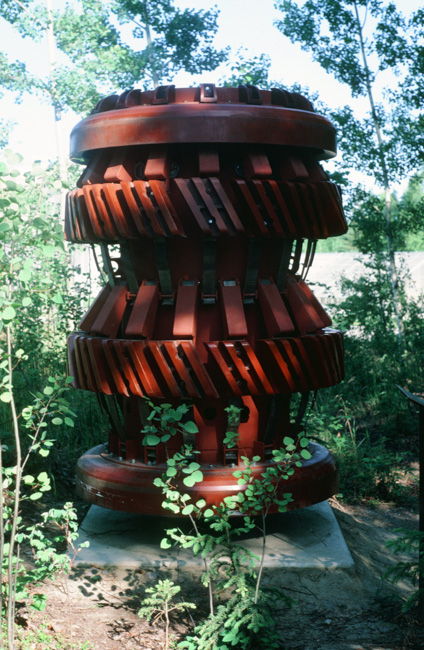 We also visited the University of Alaska. This is not modern sculpture. It is a "pig" used to keep the Alaskan oil pipeline open.

Pigs come in various types (check out the extensive discussion at Wikipedia) to clean, maintain and inspect pipelines. 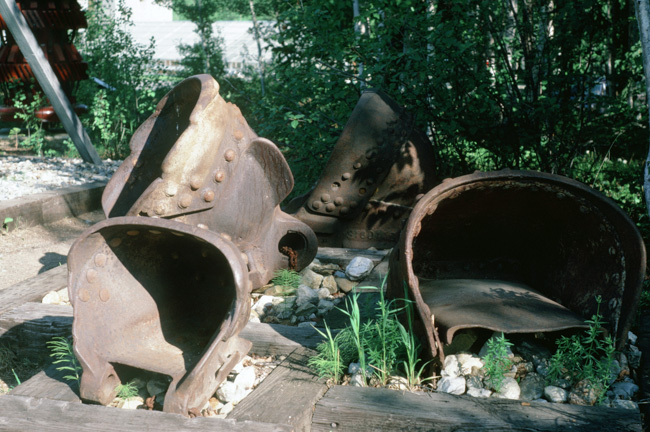 Another display shows ore buckets that were used in the gold fields. These would have been attached to a dredge. 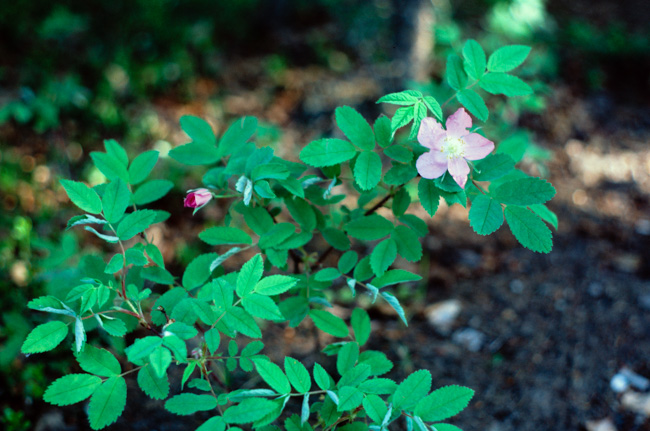 And now the obligatory wildflower shot.

This is a native prickly rose. We saw them throughout the Alaskan interior.