One of the major considerations in picking this particular itinerary had been the train trip from Fairbanks to Anchorage with overnights at Denali National Park. We love trains. Our tour group had a dedicated car with dining and an observation dome. What it lacked was adequate air-conditioning. This was Alaska, after all, so why would it need super-duper AC? The rest of the numerous cars had no AC at all, so we didn't have much room to complain. 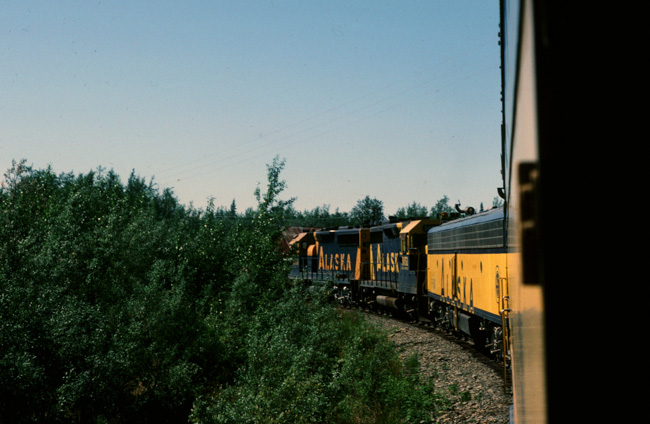 The train was large enough that it took two engines. 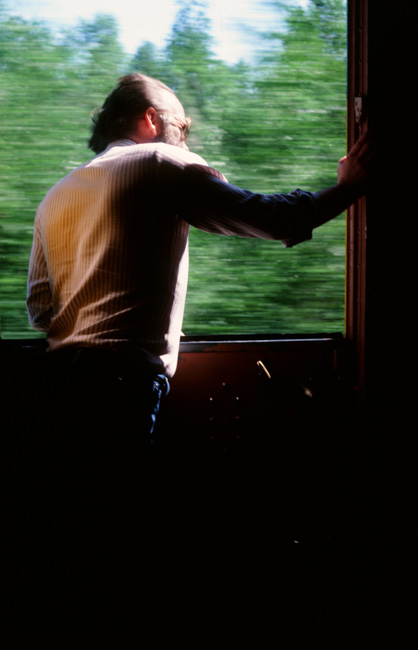 This being Alaska, there were no prohibitions against riding on the platform between cars, which is where we spent most of the first day's trip. It was MUCH cooler than inside. The open platform doors were the only obvious ventilation system for the stuffy train cars.

We had fun on the platform. 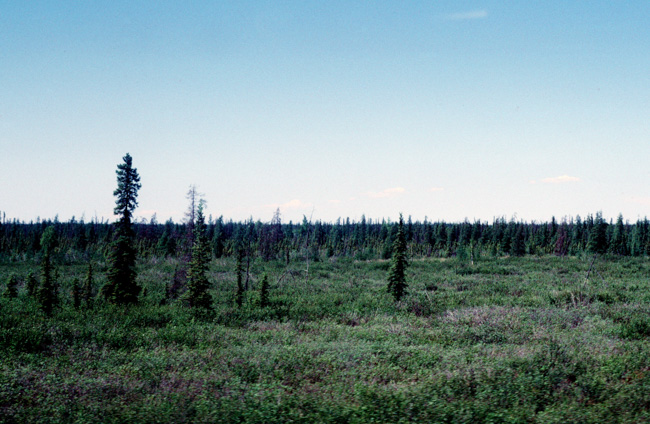 The Alaskan taiga is bleak. These trees may be quite old, but between the harsh weather and the permafrost, their growth is stunted. 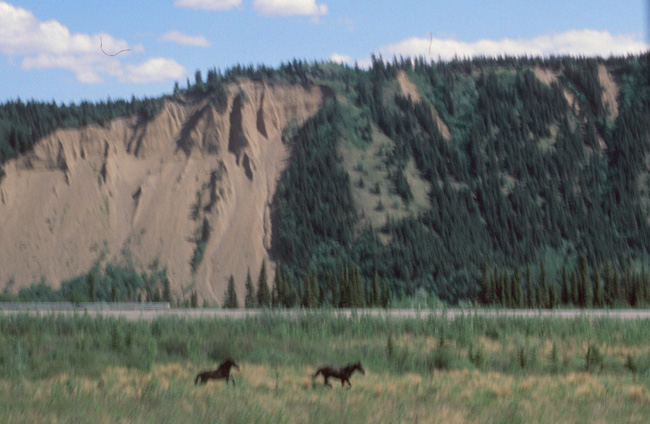 It's hard to get a clear picture from a speeding train platform, but I like the memory, so here it is.

There were several horses in a pasture next to the tracks. When the train passed by, they decided to race it. They followed us for quite a while.

I never expected to see horses in the Alaskan taiga. I wonder where they go in winter. The river in the background is the Nenana.

One of our many crossings of the Nenana River, which the train followed for many miles. Most, if not all, of the rivers we saw in Alaska were braided streams. They all carry a high sediment load from glaciers. 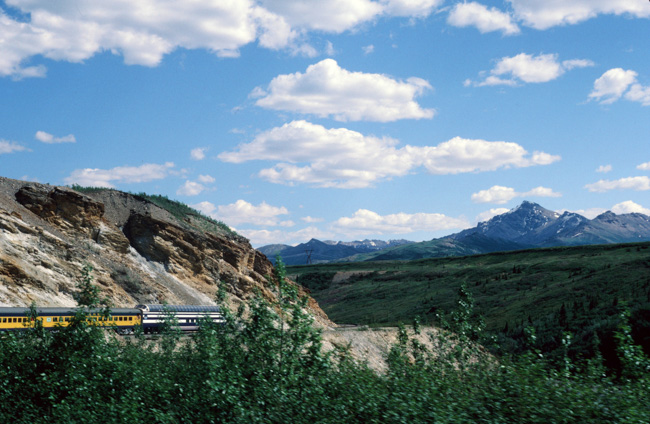 Our train rounds a curve. The silver car on the end is our special excursion dome car. It was broiling.

After arriving at Denali, we checked into our hotel for the night before our planned exploration of the park on the following day. 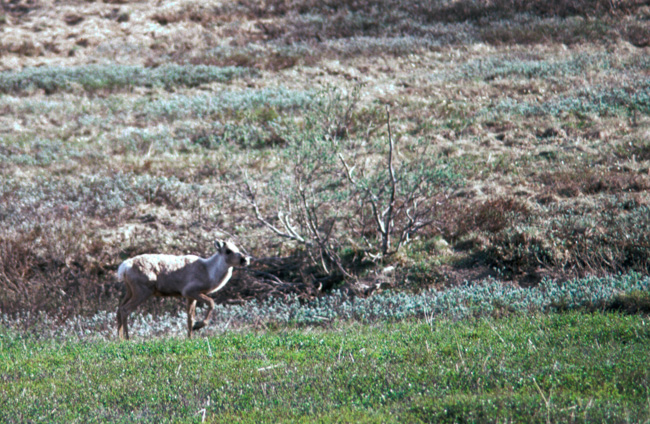 Private vehicles are not allowed into the park. All transportation is via school bus. Bright and early the next morning we clambered onto a bus to see the park.

Caribou were the first wildlife we encountered. 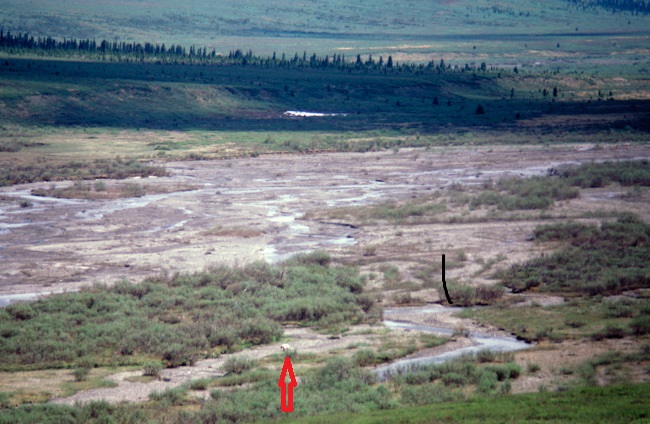 At one point we were lurching along the gravel road and the bus driver, who had eyes like an eagle, came to a sudden stop in the middle of the road. "There's a grizzly on the left," he said.

Everyone rushed to the left side of the bus, threatening to capsize it. After several moments of silence a woman asked, "Where is the bear relative to that large tan rock?" "That rock, madam, is the bear!"

The red arrow is pointing to "the rock." Yes, it's a bear. 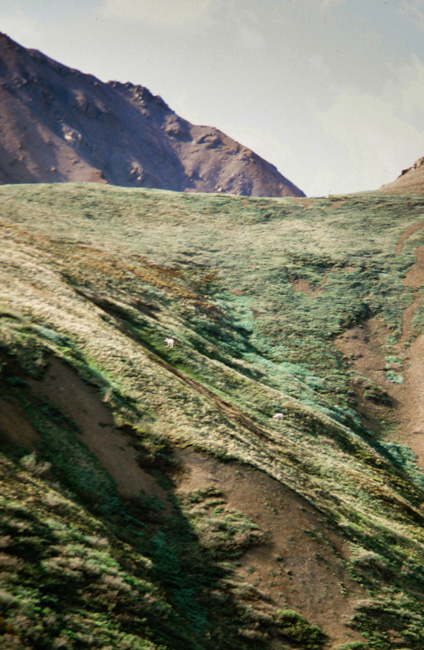 Next were Dall Sheep. There are three of them in this picture. Where? Two are on the hill more-or-less in the center of the photo. The third one is on the top of the ridge. He (or she) isn't really visible in this compressed image.

At another spot we saw some sheep and a bus passenger asked to borrow my binoculars to get a better look. She asked what they looked like with the glasses. My answer: "Grains of salt."

You may get to see wildlife at Denali, but you won't necessarily get close. We did get to see some grizzlies up close when they were crossing the road right in front of the bus. None of the pictures came out, though. Too many people were jostling the bus and trying to get to a window so they could take pictures (just like me)! 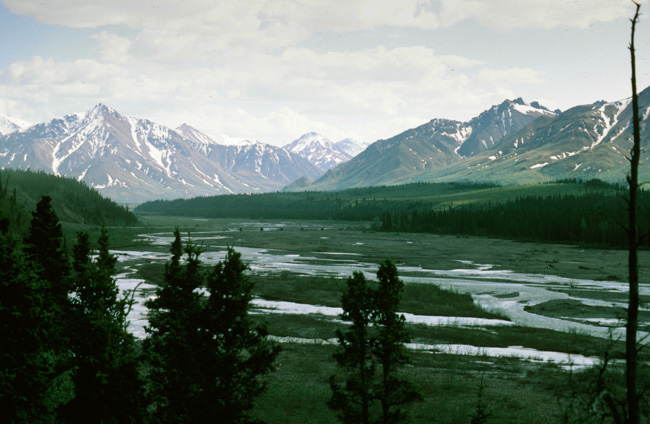 Much of our excursion into Denali was along this beautiful valley. The buses ran on regular schedules with specific stops. You could get off at a stop to explore and pick up a later bus. We didn't since we wanted to get as far into the park as we could. 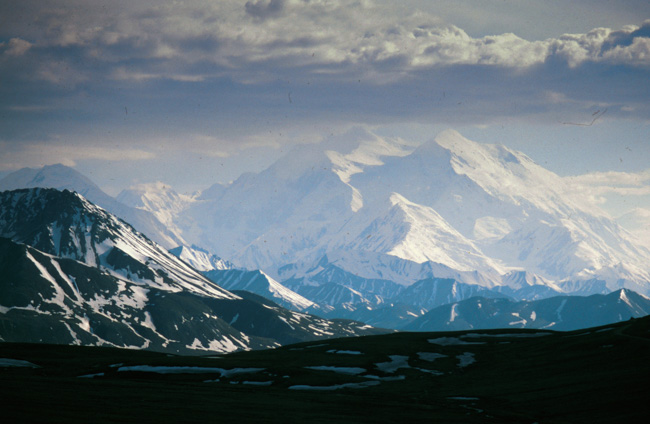 We had been concerned about whether Denali would be "out." It was.

Although Everest may top out at a higher altitude (29,029), it has a much higher base than Denali, once called by its English name: Mt. McKinley. Denali, with a summit elevation of 20,237, boasts the largest "base to peak" rise: some 18,000 feet. 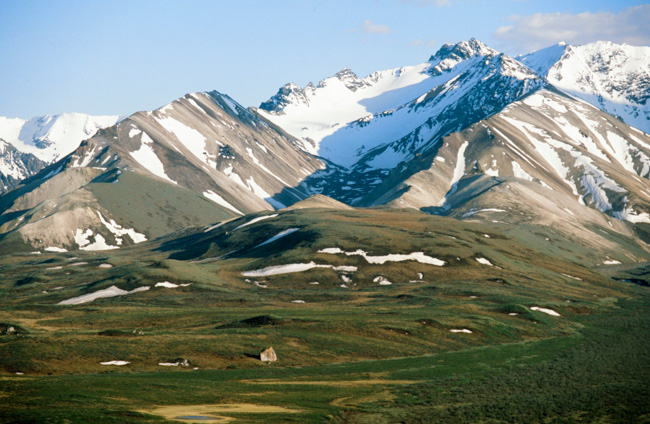 The tan house-looking structure in the lower center of the picture is a glacial erratic. The scale is hard to grasp here, but the boulder is about as big as a small house. 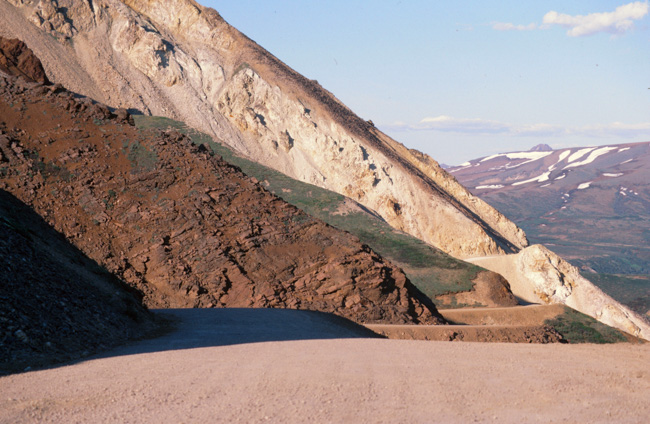 The bus ride was hairy at times. The narrow road loops around these ridges with no guardrails and not much room. It is easy to see why the park doesn't want any uncontrolled traffic on these roads. 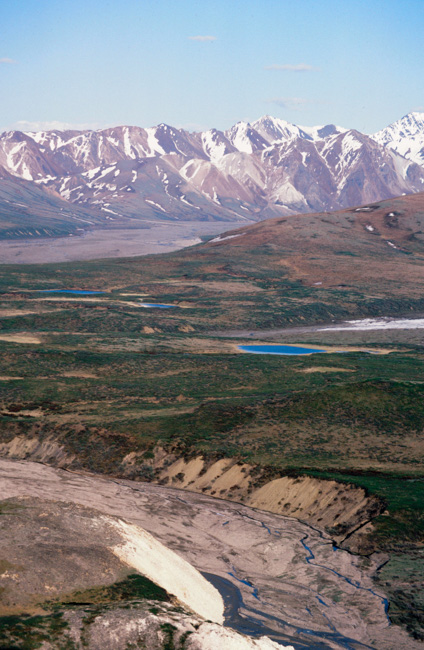 One of the areas we drove through was aptly named Polychrome Pass for all the colors of the rocks. 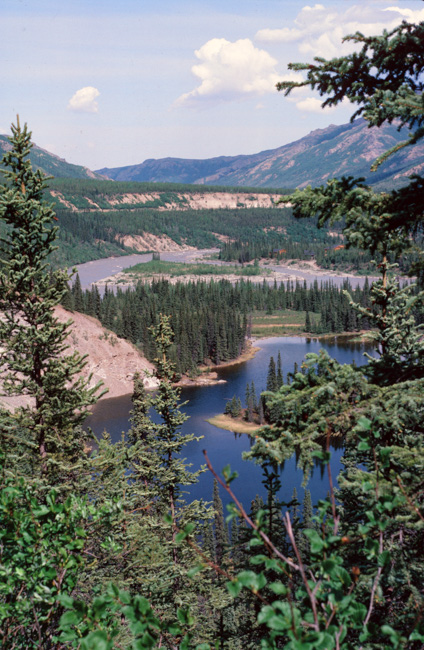 After our bus ride through the park we joined a ranger-led hike that took us to some other lovely places. This is Horseshoe Lake.

Besides the gorgeous scenery, I remember two things: mosquitoes and bear avoidance techniques.

This was the trip where we discovered DEET, so the mosquitoes didn't alight and bite, but they did hover and buzz and generally give us the willies.

The ranger gave us tips on how to identify potential bear presence (scat, marks on trees, etc.) and how to behave (make lots of noise, back away slowly if you encounter a bear, curl up into a tight ball and play dead if attacked).

There has only been a single instance of a bear killing a visitor at Denali (in 2012) and that man's camera provided evidence that he was violating all of the rules that he had agreed to when he received his backcountry permit. Nevertheless the provoked bear was killed. Doesn't seem fair. 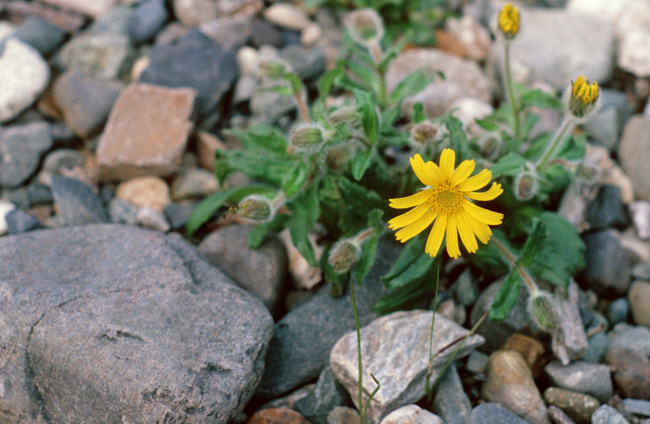 No, it's not a dandelion. This is a wildflower called Frigid Arnica or Snow Arnica. 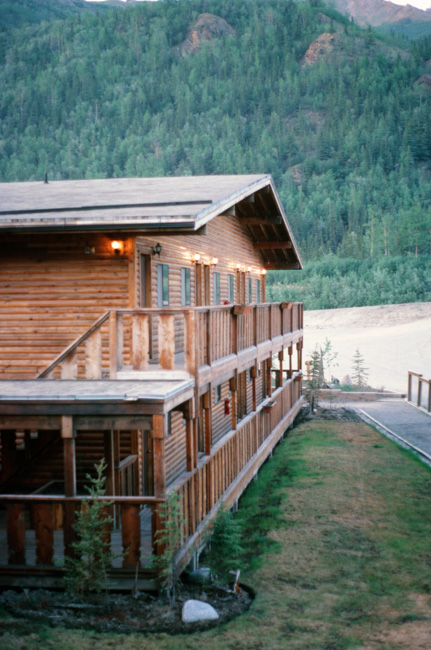 We weren't at Denali at the exact summer solstice, but it was close. We weren't above the Arctic Circle, so we didn't have a "midnight sun," but it was close. This picture was taken at midnight. Without a flash or any other artificial light other than what you see here. 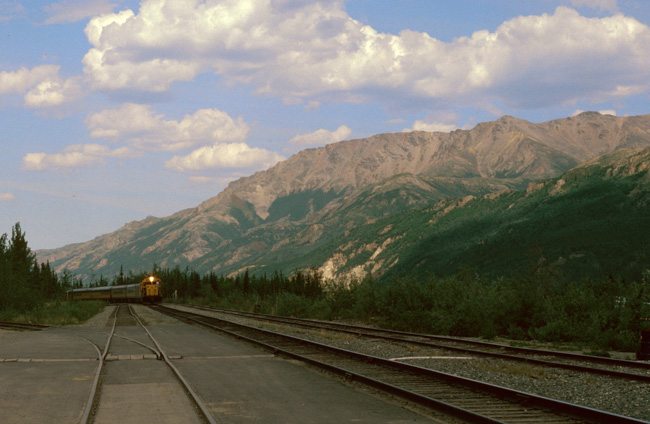 The next day we met the train for our final leg of the journey to Anchorage.

I don't remember if the AC in this Vista Dome car was in better operating order or if it was cooler overall, but we didn't spend the entire trip on the platform this day. 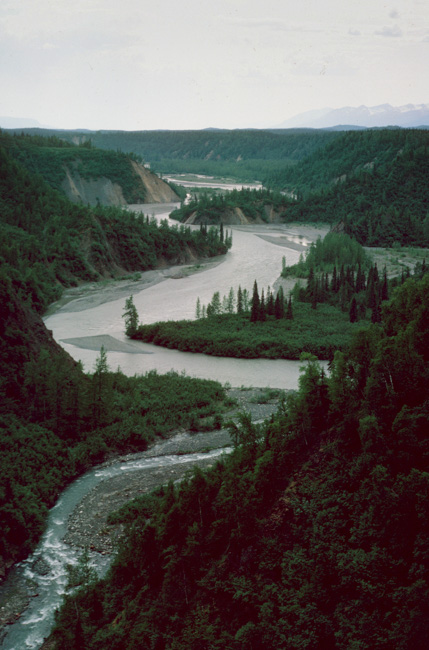 This gorge is known as Hurricane Gulch. 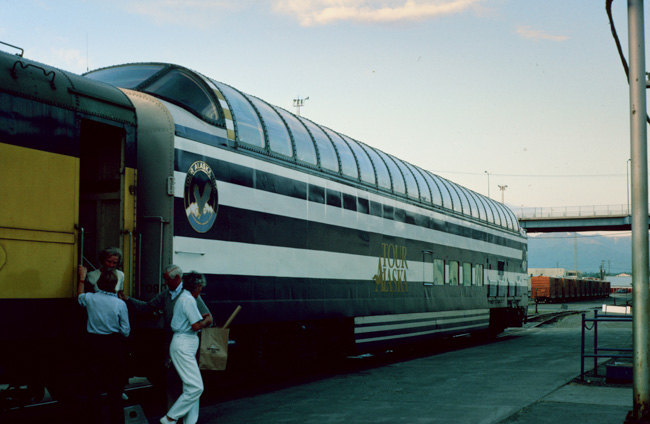 Our Vista Dome car in Anchorage. It was operated at the time by Tour Alaska, Inc. The actual car was built (according to contemporary news references) in the 1950s.

According to the WWW, this car may have been purchased by the Napa Valley Wine train. Tour Alaska is no longer in business. 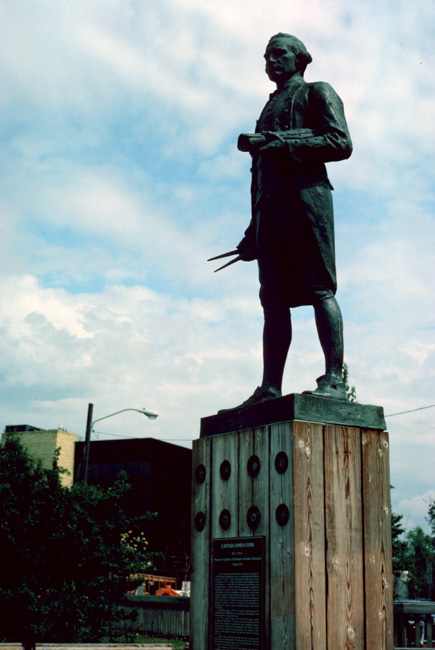 The Captain Cook monument in Resolution Park, Anchorage, will serve as our farewell to Alaska.

We've been privileged to visit Anchorage twice since then: in 2004 for an Arabian Horse Association convention and in 2014 in conjunction with a ski trip. Unfortunately we've not been able to revisit any of the other wonderful parts of Alaska that we saw on this trip.