After our free day, Jim connected with the other folks who had come to the water quality gathering. After this long lapse of time (I put these online in 2018), both of us are hazy on details. He attended some kind of pow-wow while I amused myself in Colorado Springs. The only specific thing that I can remember doing is going shopping! Not being one to shop for shopping's sake, I must have been looking for something particular, but who knows what. The only thing I remember getting is a dandy pair of tartan flannel baby-doll PJs! I don't recall why, exactly, but I expect it had something to do with shared ski cabins. I still have them, but can't tell you the last time I wore them.

After a day of discussion it was time for our field trip. The only place that I can specifically remember is Leadville and some mines in the area. The area called California Gulch, which contains Leadville, was listed as a Superfund site a couple of years before our visit. 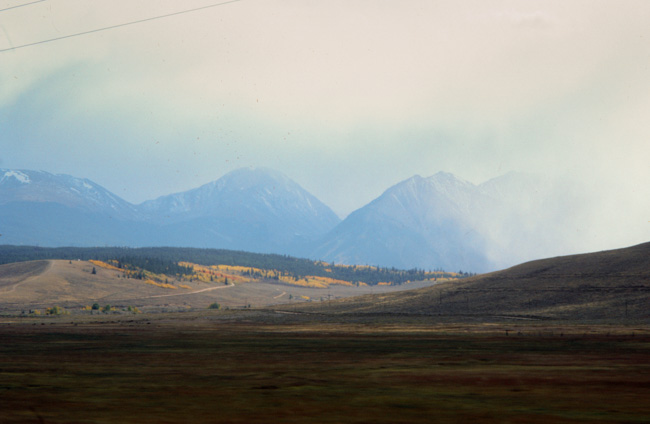 For our field trip we loaded onto a bus and headed west into the valley beyond Pikes Peak. We passed some summer storms on the way, but dodged the rain. 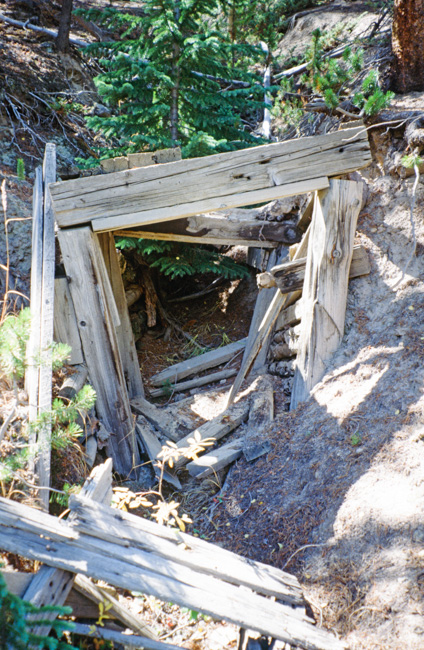 Our first visit was to an abandoned mine. I don't recall what it had produced. Lead, silver, cadmium, and other minerals abound in this area. 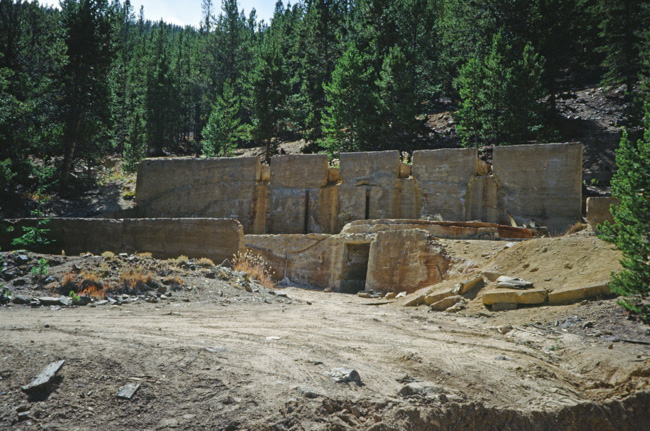 At one point there had been extensive processing facilities at the mine. Whatever was of value was hauled away. Everything else was just dumped on the site.

There were huge amounts of refuse and tailings generated in the process. Some of this pile of rock is simply that: waste rock. But the potentially toxic tailings are mixed in.

The orange-yellow scar is the runoff from this former mine. I don't have a close-up image of this stream, but it was ugly! 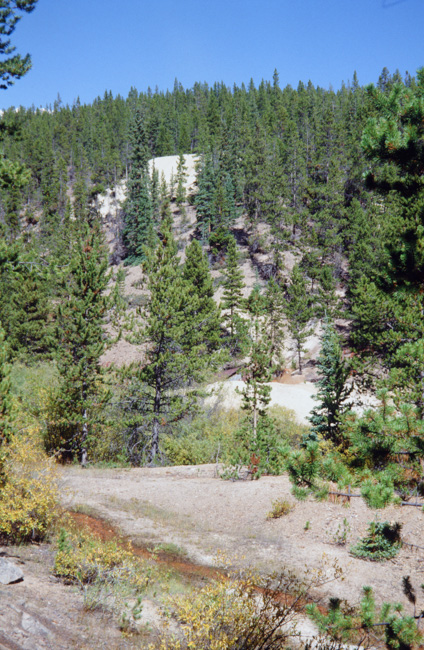 There are at least two rock dumps from other small diggings across the valley. Water runs through them as well, adding to the stream. 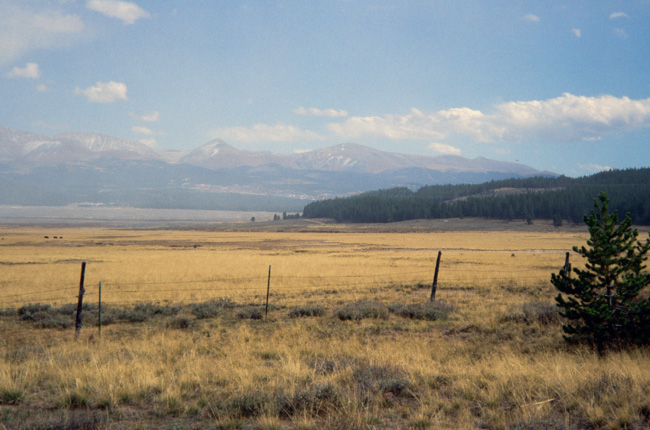 This pastoral scene at the foot of the valley is watered by the runoff from the mines. The grass has picked up toxic levels of chemicals.

Try explaining to a rancher that this visually appealing pasture is toxic. Even if it doesn't kill or sicken the cattle that graze on it, the toxic metals accumulate in their bodies and get into the food chain.

Nevertheless, there are cattle grazing there. 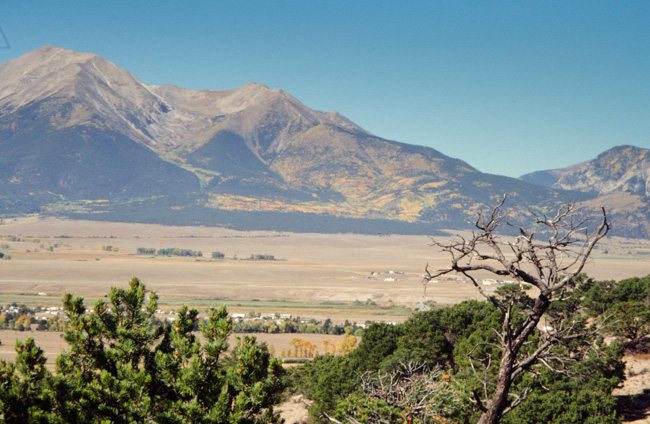 I didn't get any pictures of the mine we visited in Leadville, but this is a stream running from it.

Jim recalls that the discussion here was about mitigation methods that used to clean up the stream of the worst contamination. It is certainly not as revolting looking as the one we saw earlier. 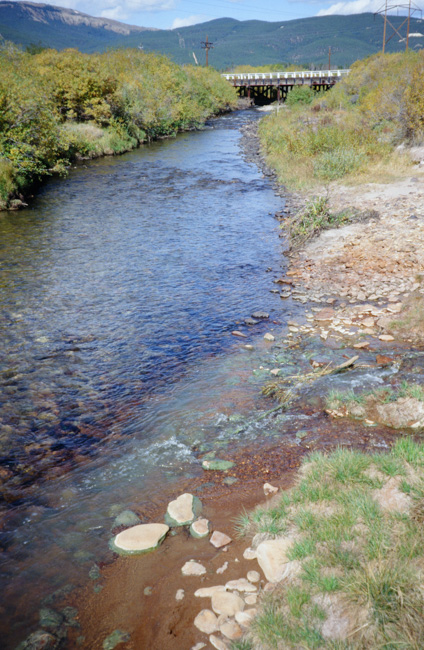 The stream shown above merging into the headwaters of the Arkansas River flowing past Leadville. The murky stream water is easy to distinguish from the crystalline river. 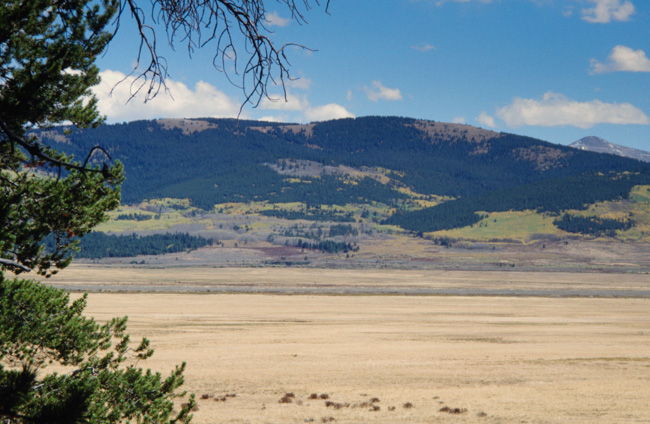 More beautiful mountain scenery with the river running through the valley. 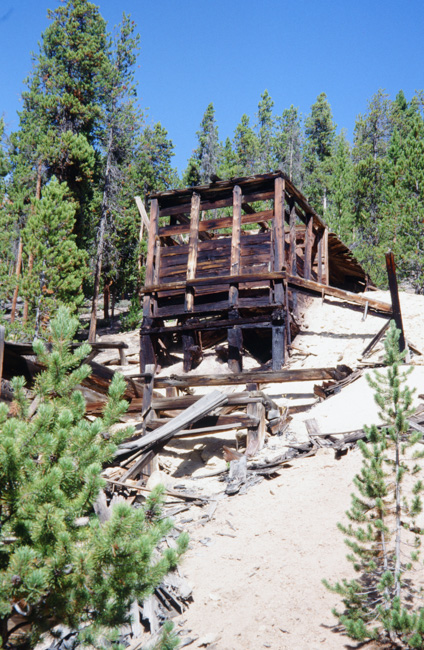 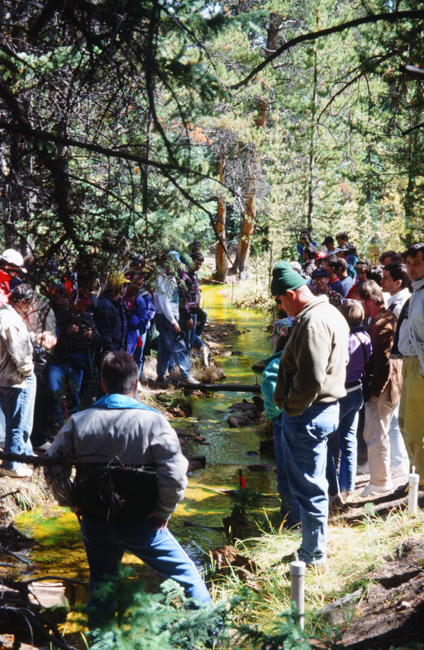 This stream is also contaminated by runoff, but the unnatural color is not completely due to the minerals. We are watching a demonstration of connecting the mine runoff to the natural surface water stream.

Fluorescent green dye has been introduced into the water running through the abandoned mine and it is now turning up in the stream. At this location there was no obvious visual connection between the mine and the natural stream, but the appearance of the dye proves that there is.

It was a long time ago and I have forgotten many details. At any event the various scientists observing the demonstration understood it better than I. 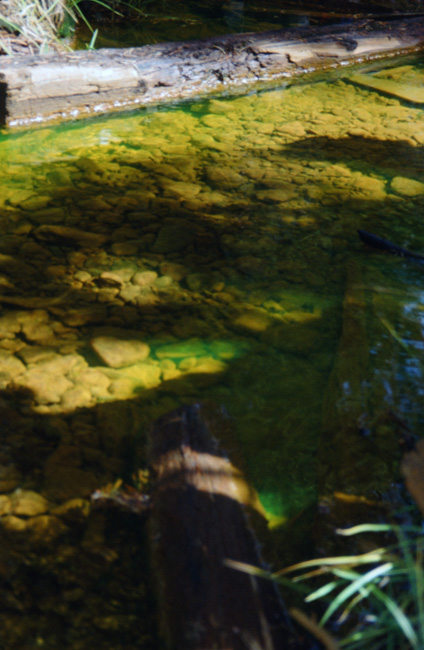 The stream has picked up the dye.

It's tempting to wonder why this is such a big deal. The minerals were there all along -- why worry about them now after the mining? The problem is two-fold. The processing necessary to extract the desirable metals from the rock also extracts undesirable elements that had been chemically bound in the rock. Additionally some of the processing introduced toxic elements to break those chemical bonds in order to free the desired metal.

Managing waste is one of the challenges of our time. We have been fouling our own nest for centuries, but only in the modern era have we been able to do it at a scale this large.

One of Jim's research projects was what to do with nuclear waste. There is no easy answer, and although they developed at least one technically adequate approach, they were unable to come up with a politically acceptable solution. The magic wand proved elusive.