Our visit to Alpe d'Huez was before the career of Lance Armstrong brought the Tour de France to the American consciousness so we had never heard of this small village and ski resort in the mountains above Grenoble. Therefore we were not prepared for hair-raising switchbacks up an almost-vertical face. Neither before nor since have I seen a road that was quite like this one.

A pity that the snow was ratty because it was a good area with variety and interest. We had a grand time in spite of lingering flu, mud and rocks. I've wanted to return but never have.

I have no pictures associated with one memorable evening here. The University of Grenoble hosted an organ recital by its senior organ majors. It was held in the local church Our Lady of the Snows. The church was beautiful and the organ was in the shape of a hand. The organ was built in 1978 so it was quite new at the time of our visit. 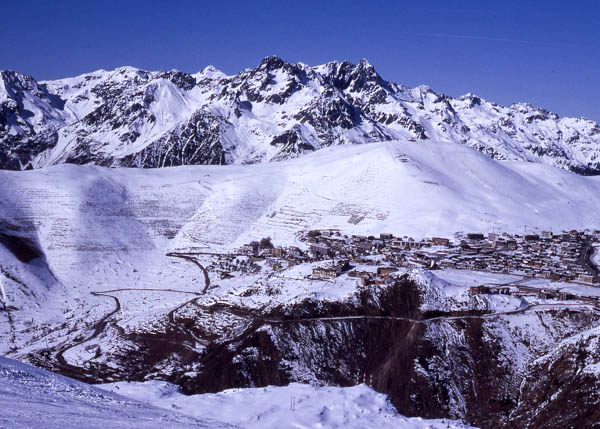 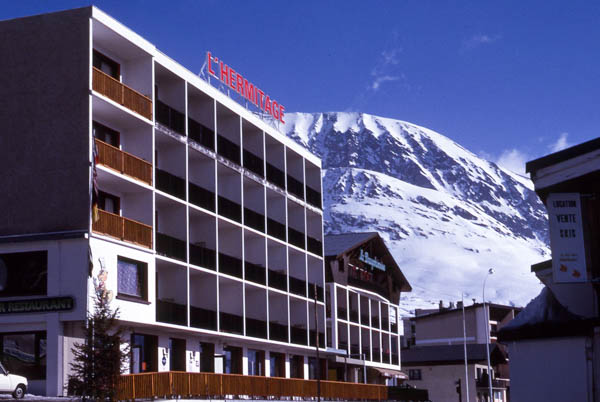 For those who have heard the story of the origin of our farm and Internet domain name, it is set in the restaurant of our hotel in Alpe d'Huez.

It's too long to relate here in its entirety. Suffice it to say that it arose from a confusion between the French words finis and terminee. When we later chose terminee for the name of our little horse farm (because it was supposed to be our last home), the solution to the puzzle how of to get it pronounced correctly was to spell it "Termineigh." This had the added attraction of giving the horses the "last laugh" – especially appropriate since the farm was NOT our last home. 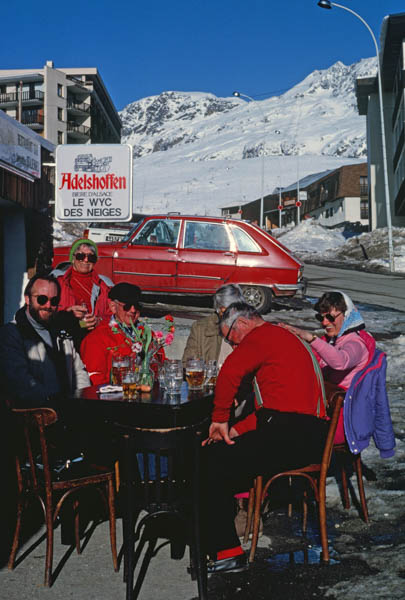 Every afternoon would find a PVS group at this bistro up the street from our hotel. 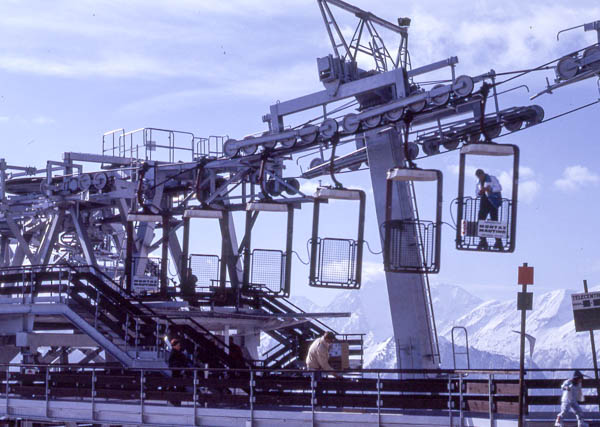 As usual there were several villages: the resort, Alpe d'Huez, puprpose-built & dedicated to tourism, the old village Huez, further down the mountain, and others scattered around. Most were reached by skiing, but Huez was reached via the "trash can" lift shown here. 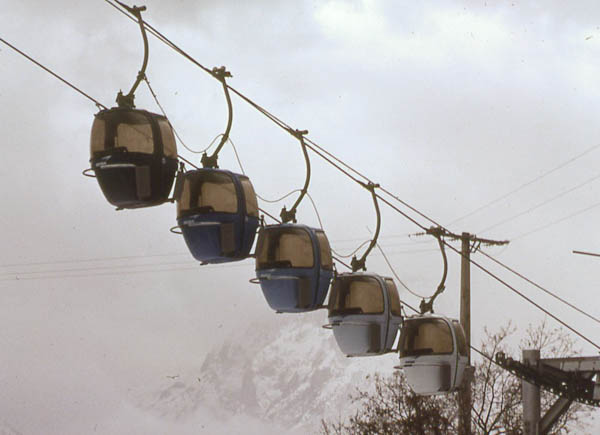 I no longer remember which area was served by this five-pack gondola. 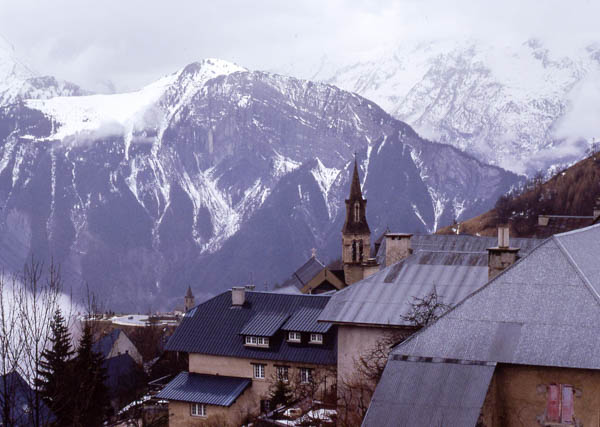 I have not been able to find anything online about the history of the ancient village of Huez, but we enjoyed visiting and strolling through the narrow streets one morning. 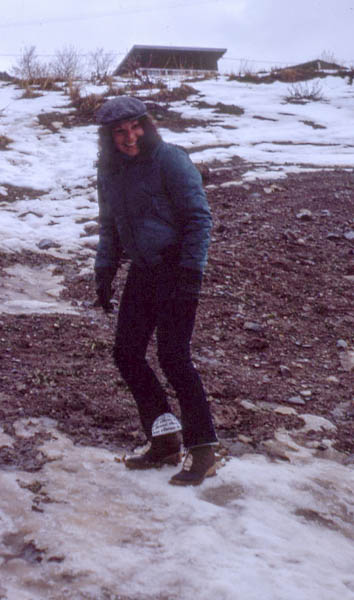 This picture of our friend Eugenia Ufholtz shows the beyond-marginal condition of the snow in spots. 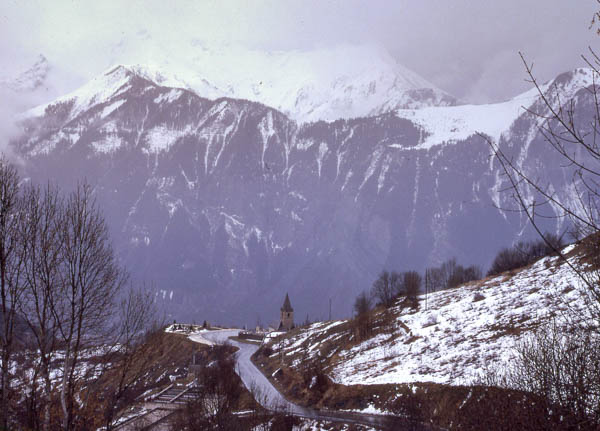 The view over Huez across the valley of the La Românche river toward the Pregentil peak hidden in the clouds. 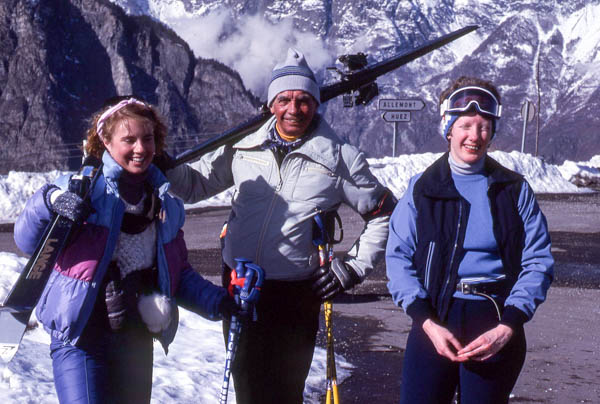 One day we skied to the village of Villard Reculas for lunch. On the other side of the parking lot is a precipitous drop down into the La Românche valley. 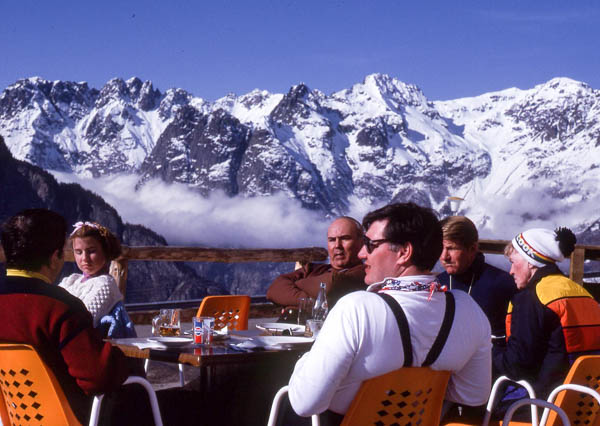 Relaxing in the sun are (L-R) Dina Drews, her dad, Sheldon Drews, Dick Commerford, Huey Roberts and Aase Berling. I don't recognize the back of the gentleman on the far left. 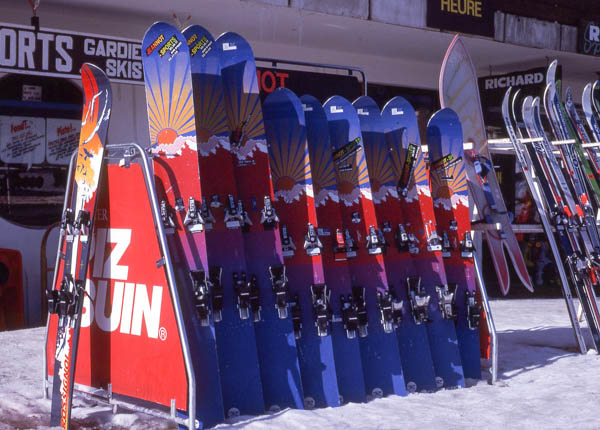 The hot new thing in this time before snowboards was the monoski. These super-wide skis had standard ski bindings side-by-side. Some of them, which as the one on the right, had split tails.

They never caught on – possibly because of the introduction of the snowboard a few years later, but they may be making a comeback – at least in France. 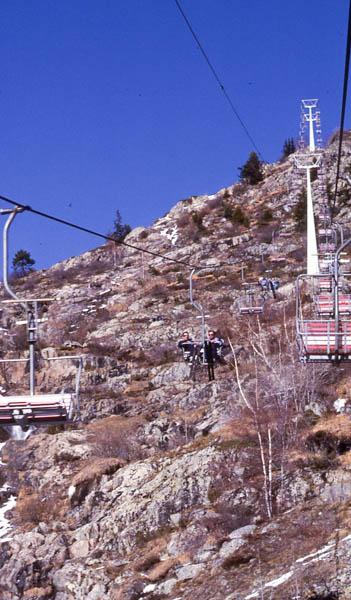 The Connexion lift took us across to the Auris en Oisans area across this steep ravine. We spent a day there and then had an exciting trip back.

One part of the run back to the village was through a steep gully. It was mostly ice and rocks with an occasional patch of snow. Every patch of snow had a skier standing on it either trying to get up the nerve to proceed or waiting for the skier below who HAD gotten up the nerve, fallen, and skidded down to the next snow patch where he or she was assembling enough gear to proceed farther.

The folks using the Connexion to get back may have been aware of that nasty bit of excitement, but it was at Alpe d'Huez that I first learned that I was capable of skiing just about anything. 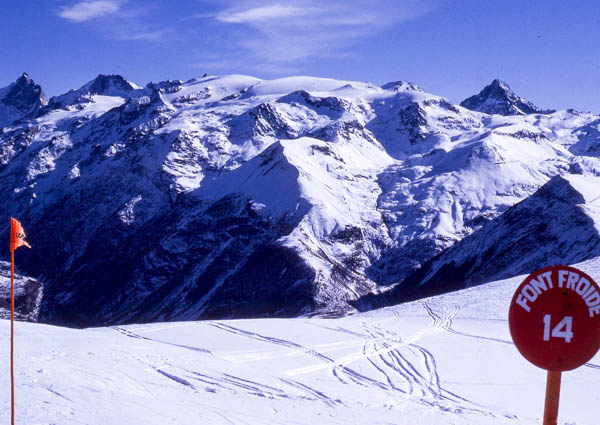 One of the runs from Signal d'Hommes.

All ski areas use colors to mark degrees of difficulty: green, blue and black in ascending difficulty. European areas add red between blue & black. We think that is a great idea and wish the US would adopt it. Some European areas also use yellow for mountaineering trails.

Trail markers are numbered to aid in telling where you are on a trail. It's useful if you need to summon help.

After a second delightful week of skiing we had to head home to jobs and our daily lives, but first, a stop in Paris.