Rather than go on one of our club trips in the winter of 1984, Jim and I decided to head off on our own. After some consideration we picked Jackson Hole as our destination. Friends Roy & Malda Elrod had skiied here for many years and recommended it highly. They were members of the 100,000' vertical club. I don't know what their lifetime total was. It turned out to be an interesting choice, although we didn't fall in love and never went back. And we didn't make the 100,000' vertical in one week. I don't remember how in those pre-internet days we found a condo to rent, but we did. Perhaps we used a travel agent (remember them?). I expect that is also the way we got our airline tickets.

We relied on public transportation to get around. I cringe remembering the not-very-long walk from our condo to and from the ski lifts. I had a brand new pair of Lange boots and this was the beginning of a love-hate relationship with them. As long as I was skiing, they were great. For walking - forget it. When I replaced them with another pair of Lange boots, I had to be reassured by the salesman that it was ok -- even though they didn't hurt, they would ski fine. He was right! They lasted many years and I replaced them with trepidation, but my most recent pair works fine too -- and are comfortable once I get them on. 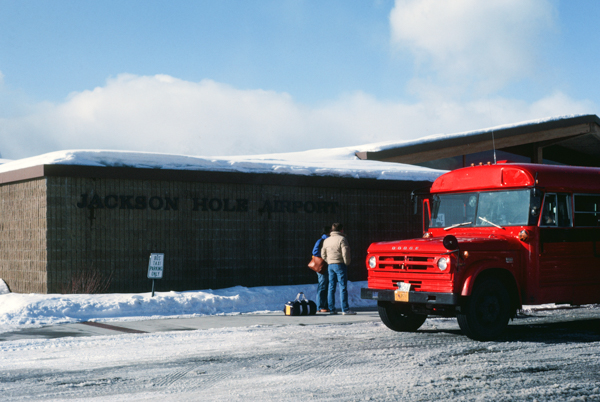 I think I somehow expected a room with a view. We could look out, to be sure, but there wasn't much to see!

At least there was plenty of snow. 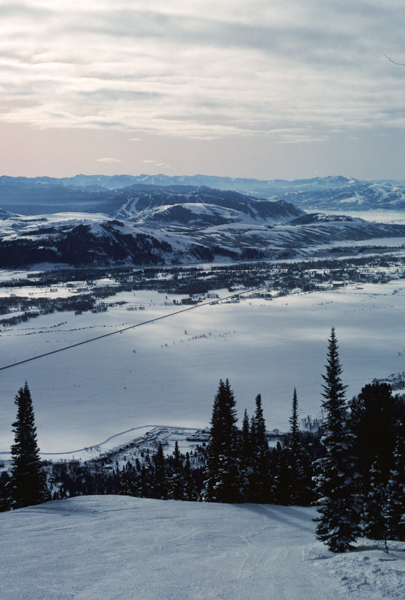 The view from the slopes at Jackson Hole toward Jackson. The town is on the far side of the low hills. The ski area in the distance is Snow King, which is where the locals ski and play.

The flat valley floor surrounded by mountains is the source of the name Jackson Hole. An explanation of how this developed can be found at this National Park website. 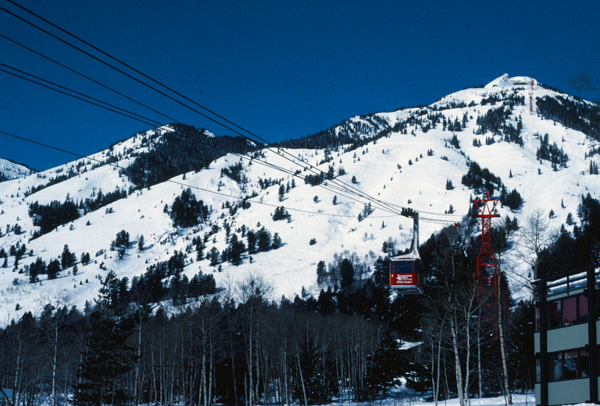 When we were there the old tram was still in service. It was replaced in 2008 by a new, faster, better tram.

I only took the tram to the top of Rendezvous Mountain once and I'm not sure Jim ever did. Most of the time we stayed on the lower slopes for a variety of reasons, but to be honest, I think the biggest reason was that all the runs off the top are black.

I recall that you had to buy timed tickets for the tram, but if so, that is no longer the case. 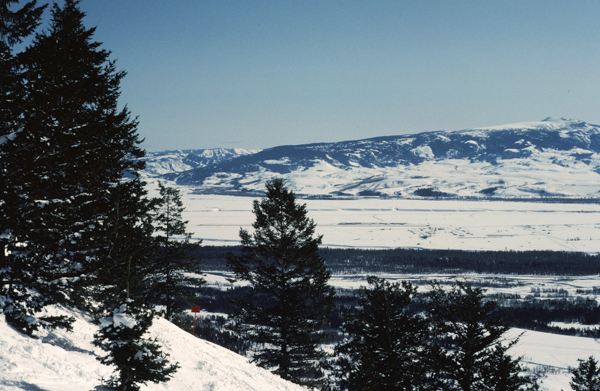 If memory serves, our first day was spent largely on Aprés Vous mountain.

This is the view looking across the "hole." 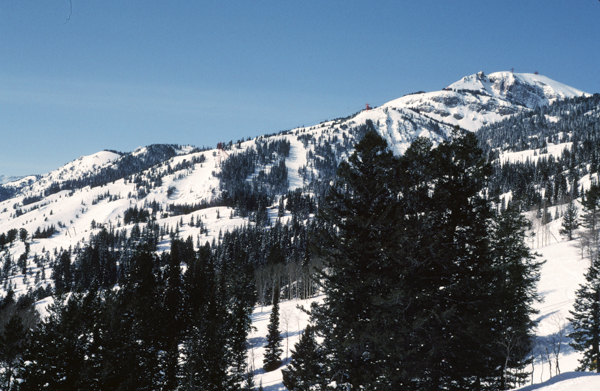 Looking up to the top of Rendezvous Mountain. You can just see the red towers for the tram. 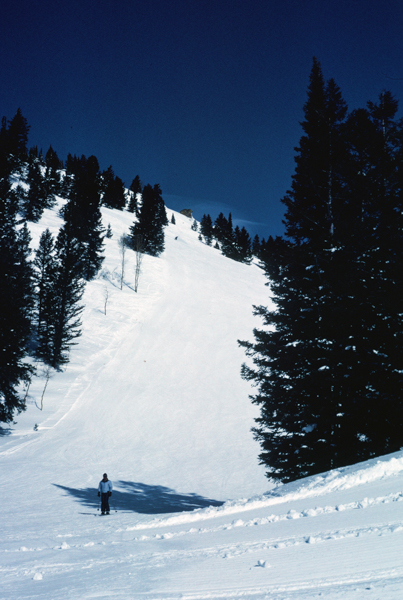 While we were at Jackson Hole, I signed up for a lesson to learn to ski bumps - slooooly. Instead of signing up for a group I hired a private instructor. He was quite good and taught me techniques that I use to this day. In fact I raved so much about what I was learning that Jim signed up for the second day with the same instructor. It started only ok. Jim said that he was in the market for new ski boots and asked the instructor's advice. Instructor looked at Jim's then-boots, curled his lip and muttered "rental equipment." Well! I don't recall what he recommended.

It went "downhill" from there. After a time of skiing and instruction, we reached the top with the instructor and stood looking down a steep, killer (to us) bump run. Instructor glanced at his watch, exclaimed that he was late for his next lesson, and vanished in a flash of powder!

Jim and I looked at each other. At the bumps. At each other again. Got down somehow. I don't think Jim ever willingly skied a bump run again. Afterwards we found a number of mountains with groomed runs side-by-side with bumpy ones so we could both have fun. 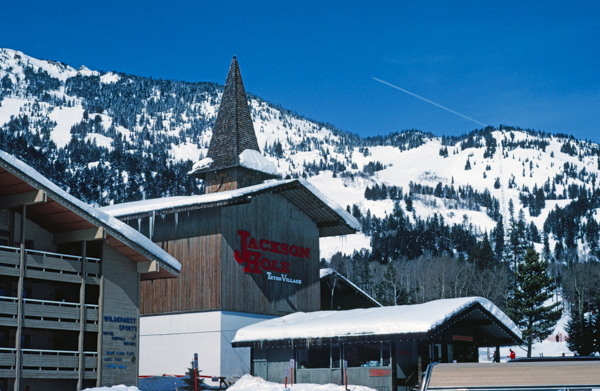 I expect Teton Village has grown considerably since we were there.

It was a pleasant place with a number of good eateries, although we also cooked in our condo. I did NOT sample the Rocky Mountain Oysters! It seems to me that this may have been the first place we discovered craft beer. 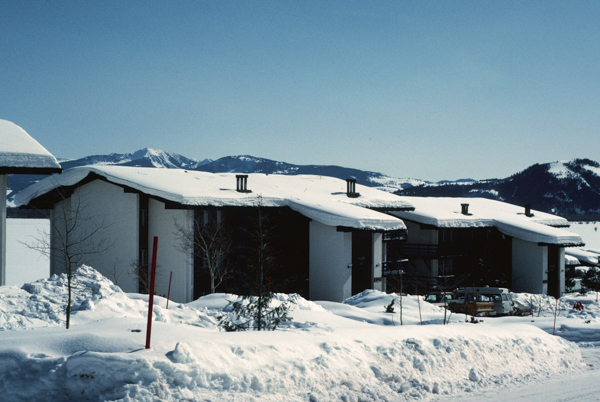 Our home away from home. We were on the lower floor of the left-most building here. 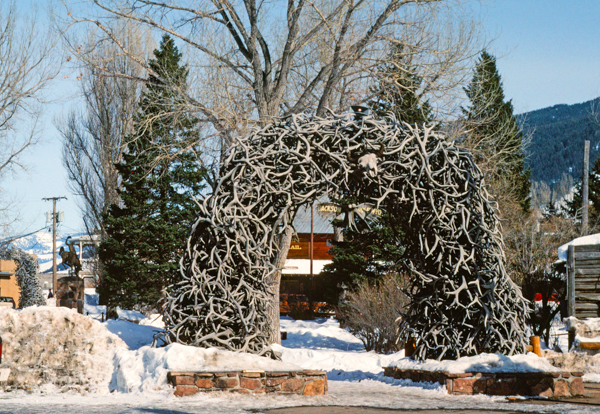 One day we took the bus into downtown Jackson. There are four antler arches framing the town square. The first arch was built in 1953 and the others followed over the next ten years. The local Rotary Club was responsible for the original arches and their maintenance. In 2013 a full replacement project was completed.

No elk were killed to built the arches. Local Boy Scouts collect shed antlers from the National Elk Refuge. 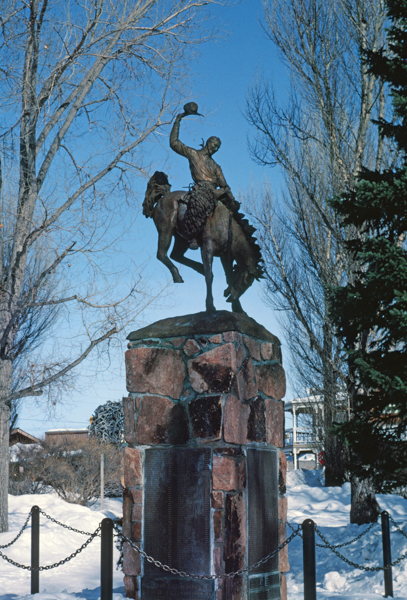 Looking online I verified that this is a war memorial. Why a bucking horse on a war memorial? Good question! Haven't yet found a definitive answer.

Is this the same bucking horse and rider as the one shown on the Wyoming license plate? Another good question. And no definitive answer.

Who is the rider? Another good question. Opinions differ.

The bucking horse & rider as a symbol of the state of Wyoming dates back to the early 20th century. Wikipedia has an interesting discussion that provides some rationale for the image being used on a war memorial. 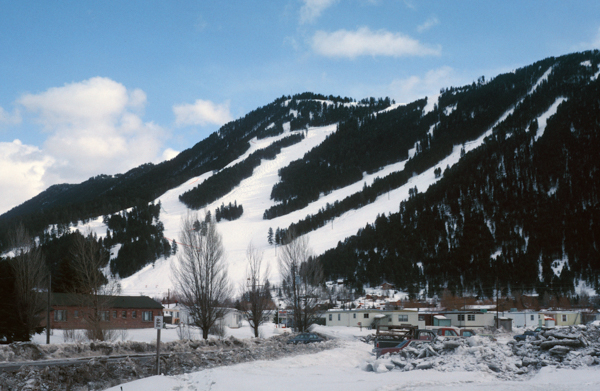 The Snow King area has been much improved since our visit there. 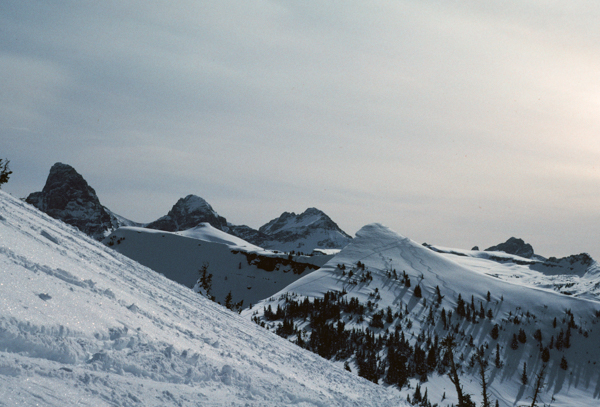 When I traveled to Grand Teton National Park in the 1960s with my family, I thought it was the most beautiful place I had ever seen. 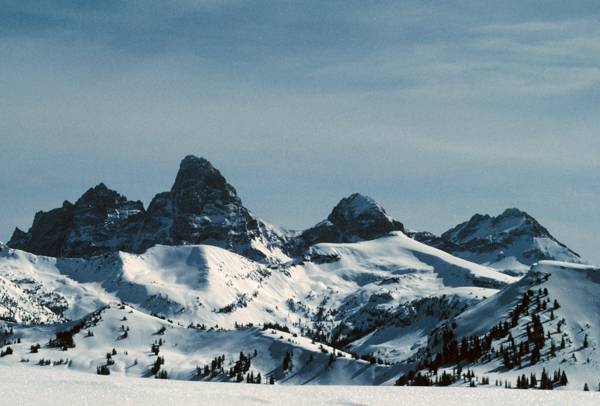 Another view of these glorious mountains. 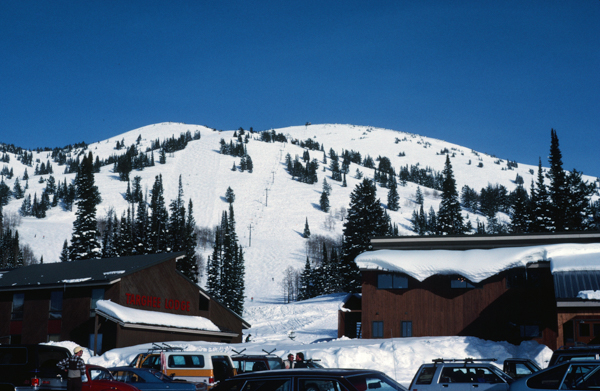 We took advantage of a one-day excursion to Grand Targhee, on the other side of the Tetons.

This mountain is noted for great snow and small crowds. It is also noted for visibility problems that were not a problem this day. It has the nickname of "Grand Foghee." Given that much of it was wide open, it would be intimidating in poor visibility.

At the time of our visit there was little lodging in the area, which explains the lack of crowds. There has been much more development since. 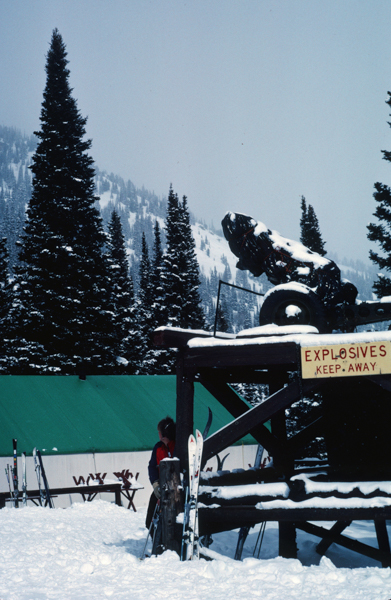 Back in Jackson Hole we passed by the cannon that was used for avalanche control.

Over the years we've seen lots of different kinds of percussion tactics to bring down avalanches: mortars, howitzers, explosive charges, even supersonic aircraft in Switzerland! 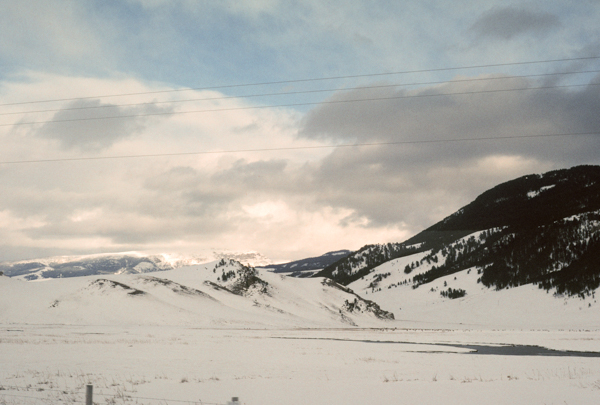 I mentioned the National Elk Refuge as the source for the antlers around the square in Jackson. We are passing through it here. The dark dusting in front of the hills is a herd of elk. 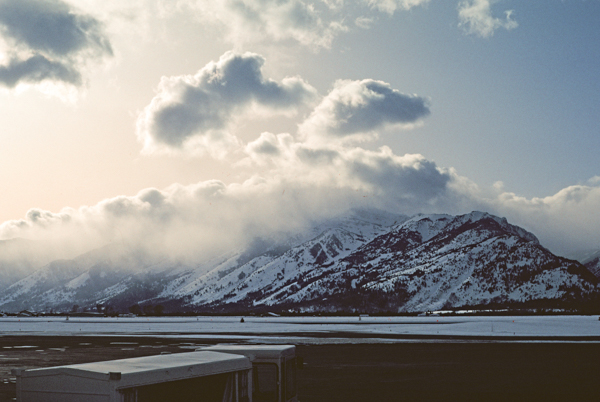 Our last view of the mountains from the airport as we were leaving. Looks like we timed our visit well for blue skies!