At Whistler/Blackcomb we had ski-in/ski-out accommodations, but that would not be the case in Alberta. We rented cars, four to a car, and lodged in condos near Lake Louise. We had to negotiate who would be skiing which of the several ski resorts on any given day and arrange carpooling accordingly. The "rule" was that it took at least three skiers to commandeer a car. It worked OK, but not great. This was not a system that was used on many trips. 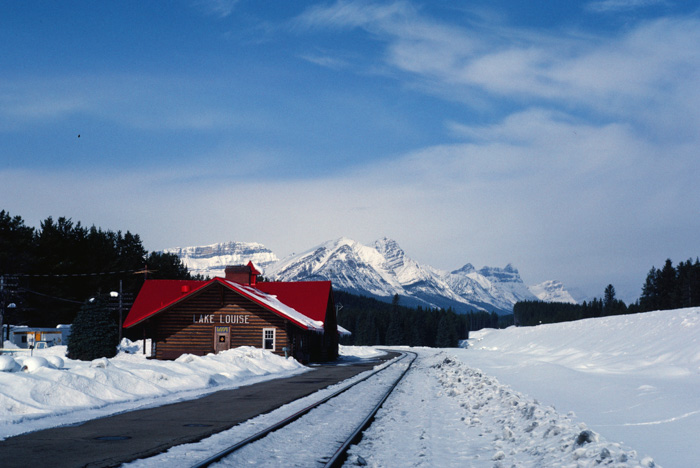 The railroad companies desigend these resorts to lure tourists onto the rails. American railroads did the same thing and resorts at the Grand Canyon and Sun Valley, among others, were the result. 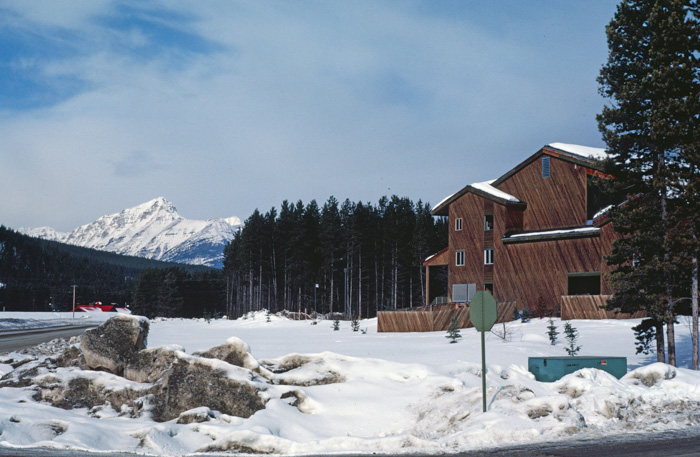 Our condo hotel. It was a nice place, but NOT ski-in/ski-out! 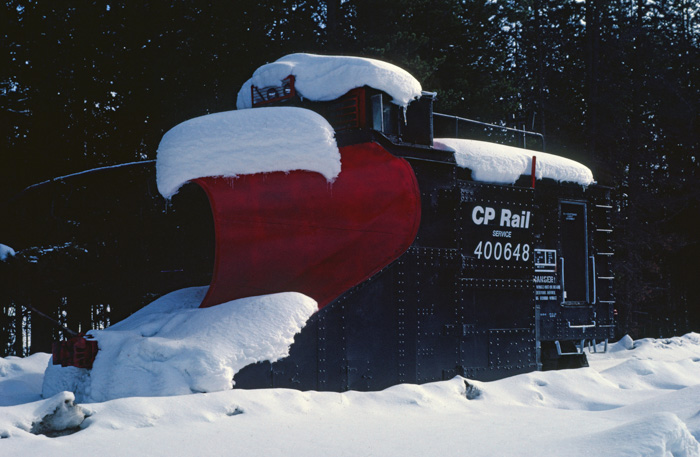 Unfortunately for our skiing, one of the final meets of the 1983 World Cup was in Lake Louise the week we were there. The little snow left on the mountain was cannibalized to beef up the downhill course. Slopes were closed for training and the races. We skied Louise only one day and I didn't take any pictures then.

The rest of the week we branched out into new adventures.

One afternoon we walked along the tracks to see what we could see. Serious snowplows are needed to clear the rails after snowstorms. 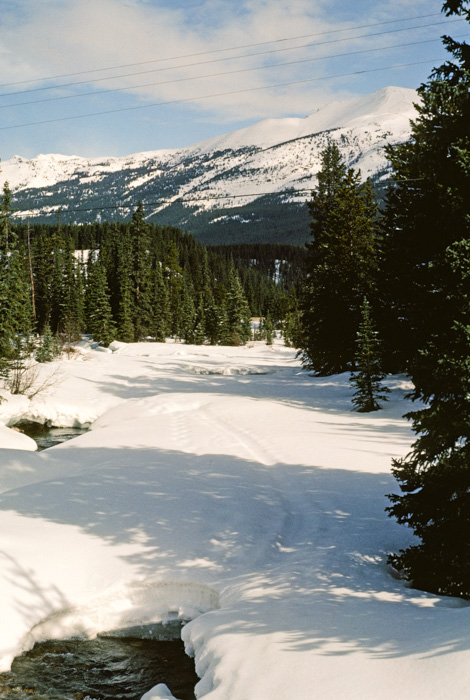 The Bow River runs alongside the village of Lake Louise. One day we decided to try cross-country skiing, so we rented some skis, boots and poles and explored the countryside. 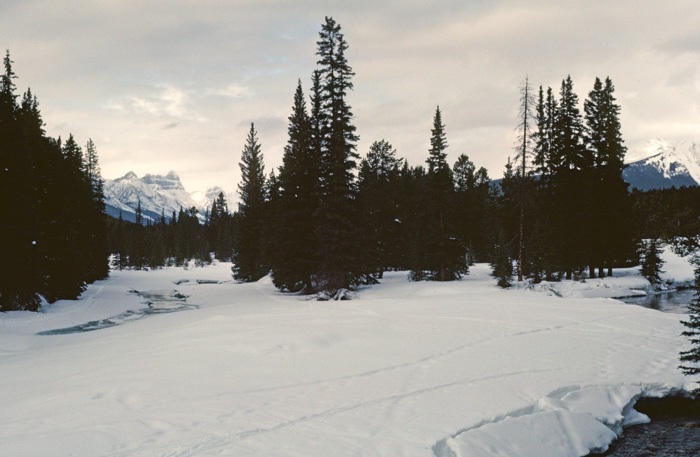 Another view of the river.

I'm glad we managed not to fall through the ice! 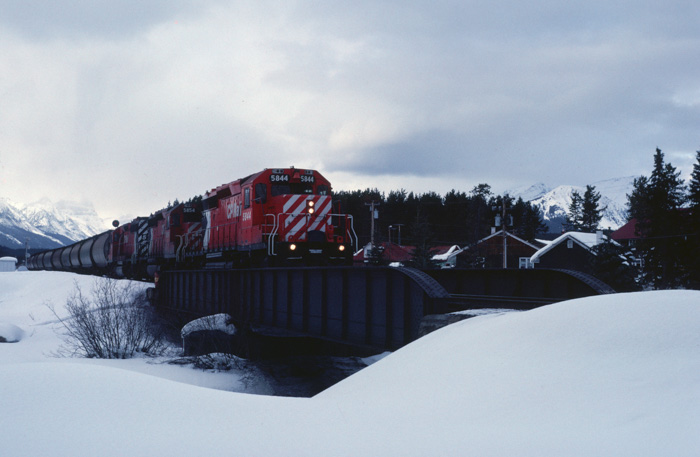 The train tracks paralleled the river. We saw (and heard!) this CP freight zooming by. 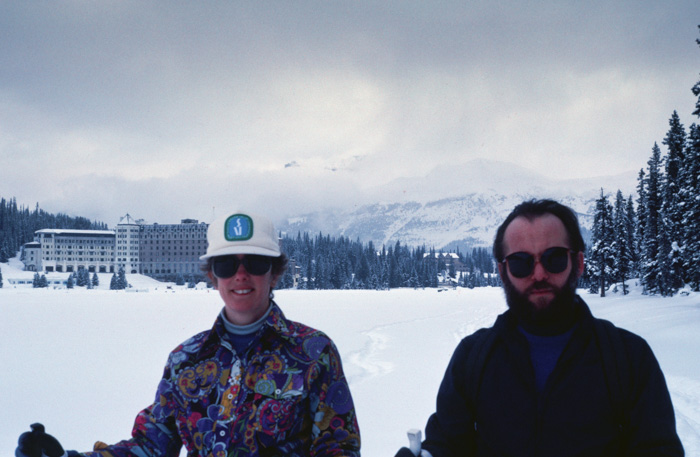 We enjoyed our day of cross-country skiing enough that the next day we rented equipment again and headed to Chateau Lake Louise to ski on the frozen lake. One of the other travelers joined us to fill out the minimum three skiers to take a car. 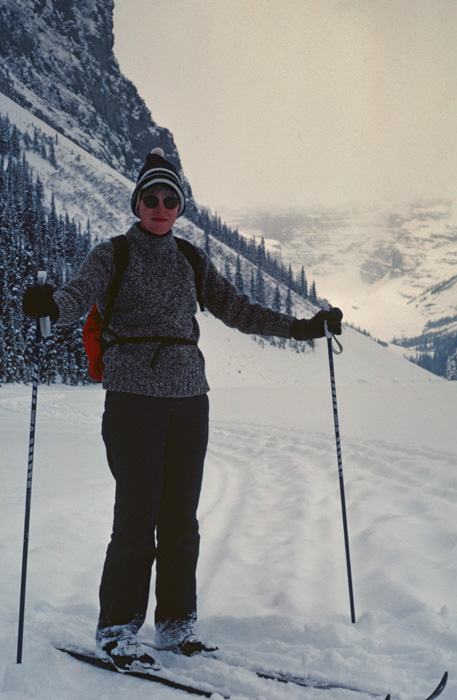 Rosemary Vidal was a nice lady and we had a great day together. 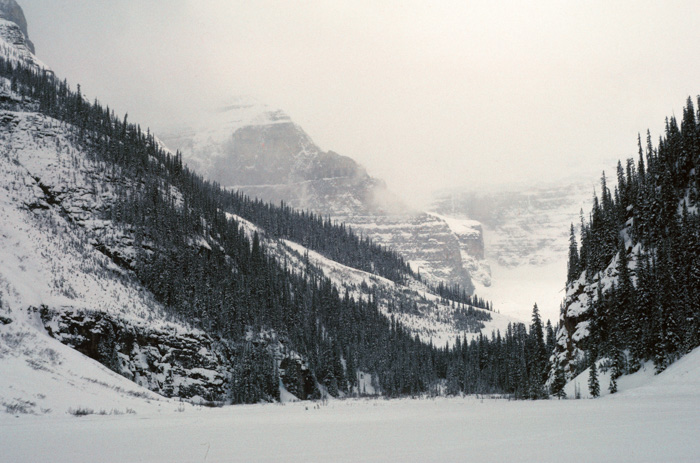 The lake itself was frozen and covered with snow. Needless to say, it was flat and easy for inexperienced cross-country skiers to negotiate. The only thing we had to remember was to stay in the tracks and out of the soft snow. 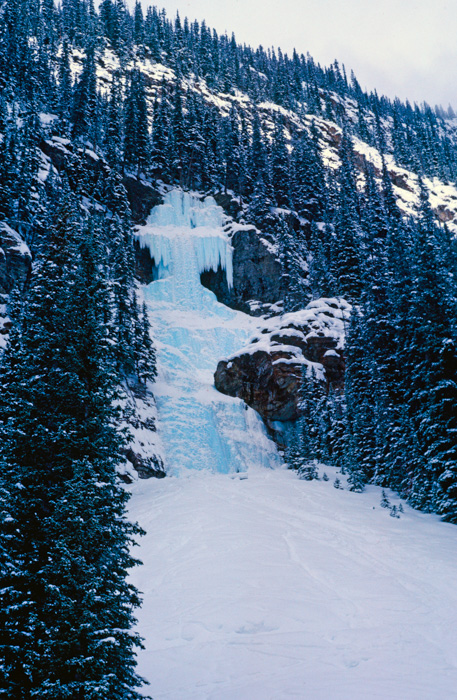 The frozen waterfall at the head of the lake illustrated the clear blue color common in the region. 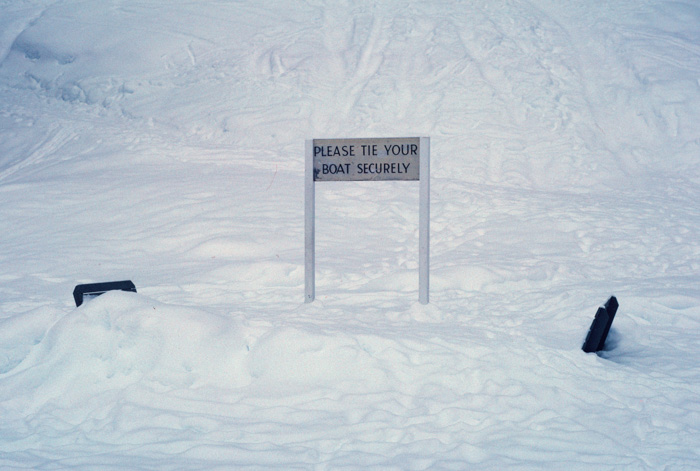 This boat dock was at the base of the waterfall. Any boat left there in the fall was certainly secure by now! 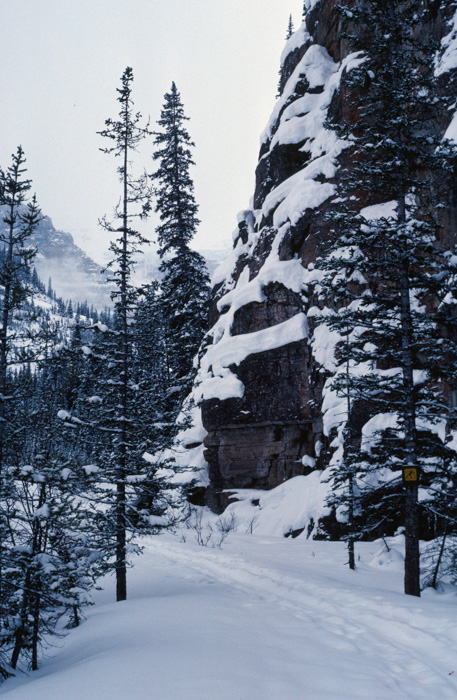 Eventually we reached a spot where we had to leave the lake and take to the lake shore trail. It wasn't flat like the lake and presented a challenge. At one point there was a slight downhill and I discovered that downhill skier reflexes -- weight forward into the front of the boot -- lead to a complete face plant. The boot heels are not fixed to the ski!

We began to consider taking lessons. 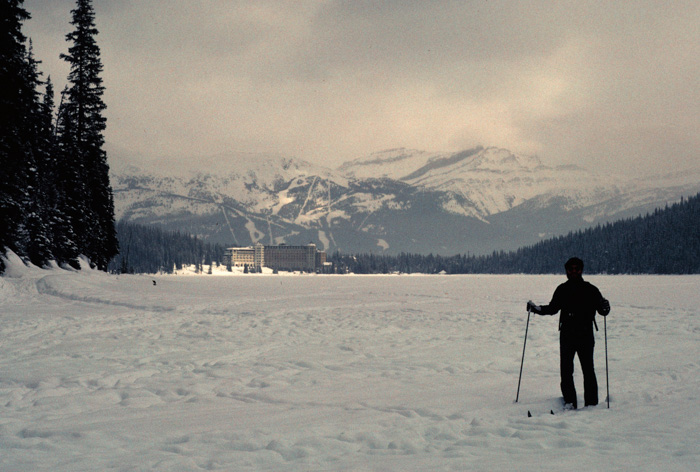 Once we were back onto the lake we headed back to the chateau for lunch.

The Lake Louise Ski Resort can be seen behind the chateau. 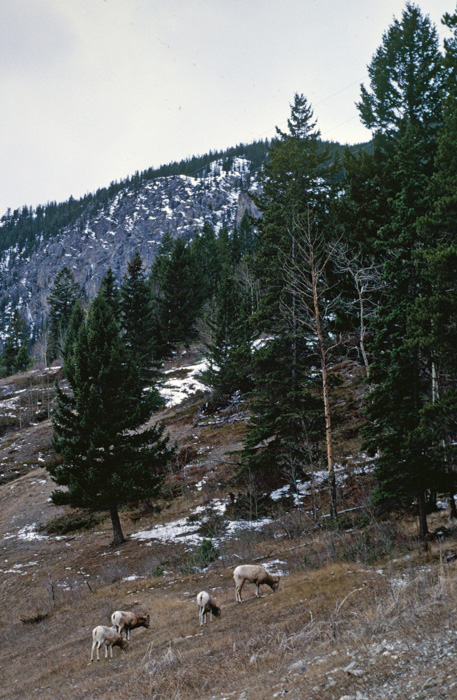 One day a group of us commandeered a car to go to the Banff Springs Hotel. These bighorn sheep were alongside the road. 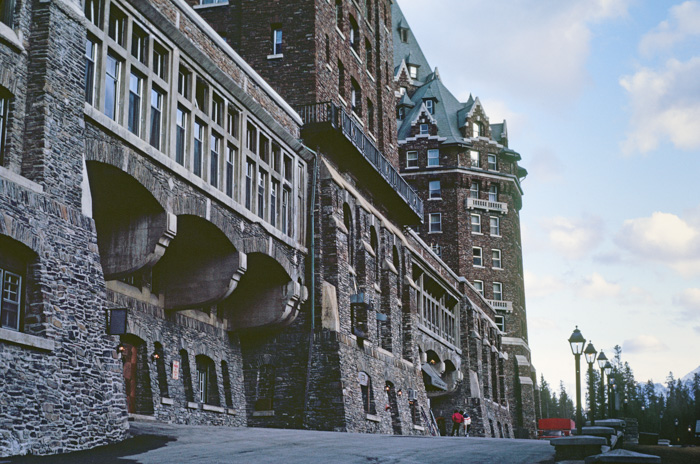 The Banff Springs Hotel was built a couple of years prior to the Chateau Lake Louise. Both hotels have been expanded since their opening in the late 19th century. During our visit part of the hotel was closed for additional renovation. 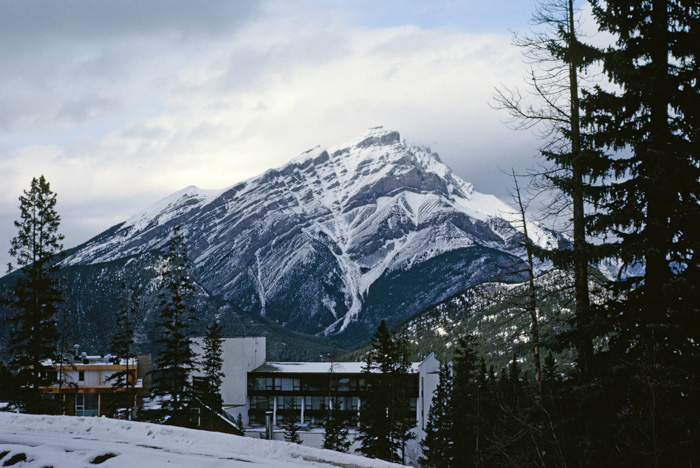 The view from the hot springs.

The mountains are particularly striking in this region. 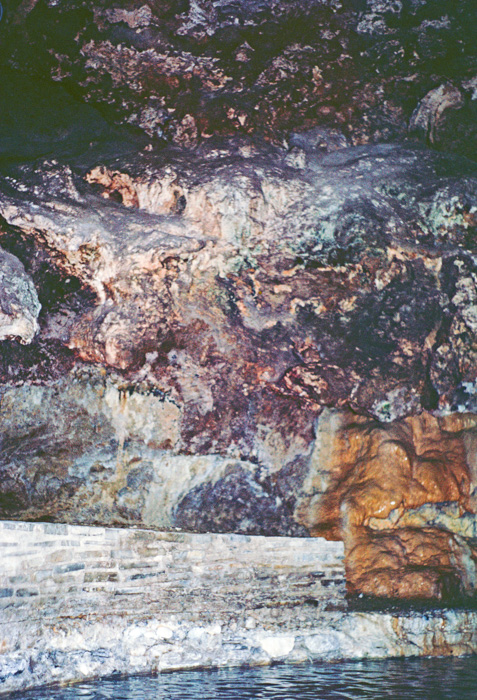 Banff is noted for its hot springs. We brought our bathing suits and enjoyed a soak. In addition to the large outdoor pool there is a cave spring. The minerals deposited inside the cavern make it quite colorful.

We were even treated to a brief snow shower while in the outdoor pool. Nice!

Thelma & Lori tied, according to the trip report in the club newsletter, for the "Best Stein Erikson" award: two skis with but a single track.

Jim & I won the "Most Cross-Countryest." 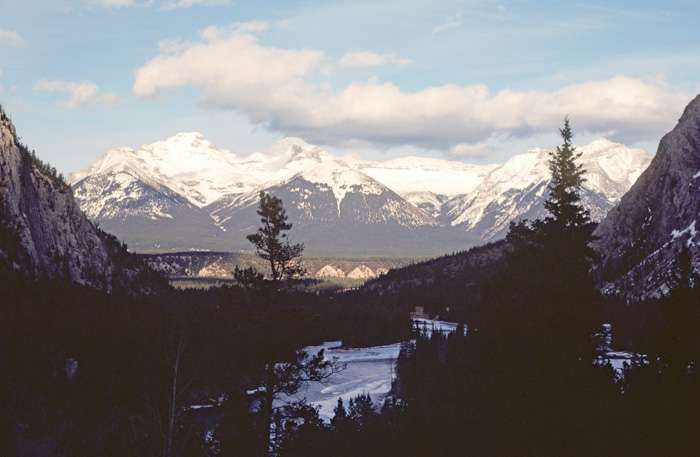 The view from the hotel over the Bow River. 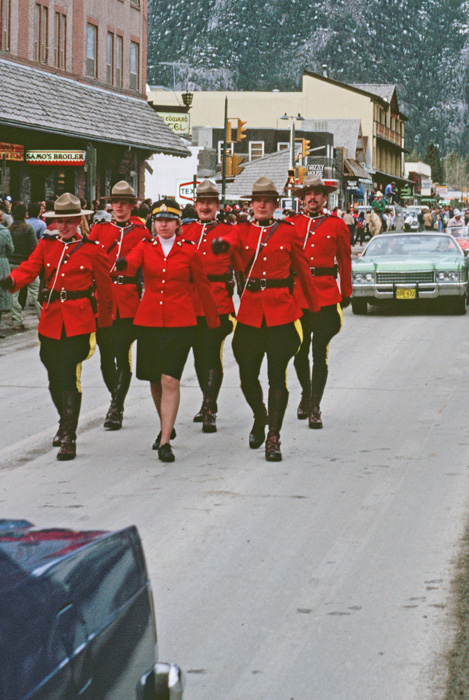 After our tea, we wandered downtown for a parade in honor of the World Cup. Canadian Mounties without their mounts! Horrors! 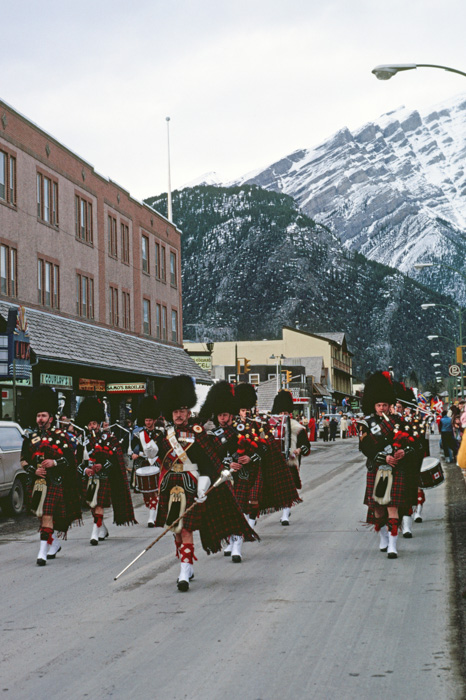 It's always nice to have a pipe band - this one from the Calgary Police Department. 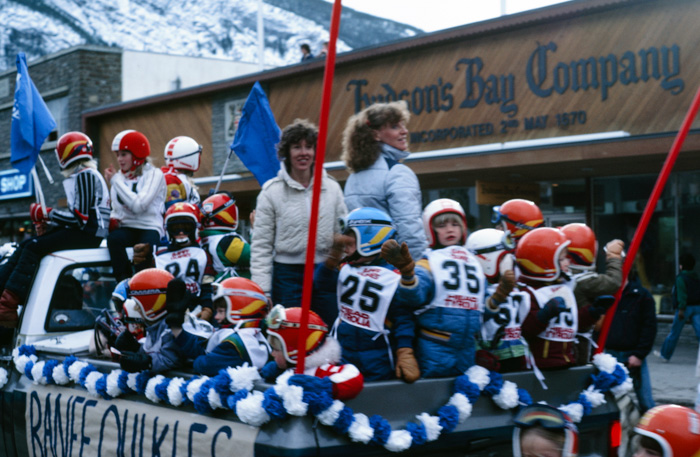 All the national teams had their own floats, but my favorite was the float of the Banff Quikies, the racers of tomorrow.

I'm glad to see that the program is still in existence. I wonder if any of these mogul mites made it into international ski racing. 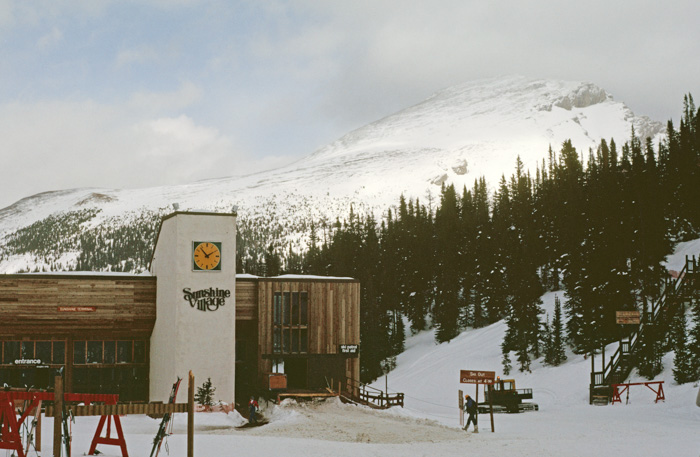 A couple of days we skied at Sunshine Village, at the time a small (by comparison) area between Banff and Lake Louise. It has expanded since we were there and now encompasses three mountains. My best guess is that the area we skied is represented by the Mt. Standish trail map at the above link. Most of the local resorts benefited from the 1988 Calgary Winter Olympics although none of the events were held in this area.

A highlight in my memory is a chair that crossed the Continental Divide and the border between British Columbia and Alberta. We were taking this chair one day in a pea soup fog when we passed the boundary sign: "Welcome to Sunny Alberta!" Where's my camera when I need it!

We signed up for cross-country ski lessons since we had been having such a fun time. If you do it "right," it's way more work than we had in mind! Moreover skinny skis without metal edges are pretty scary on hard-packed snow. 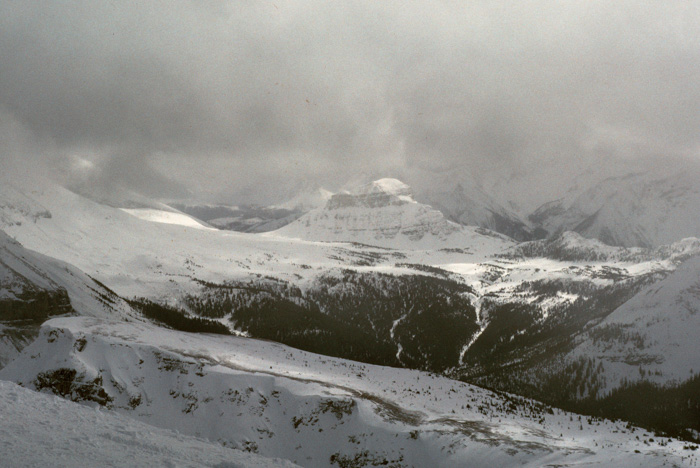 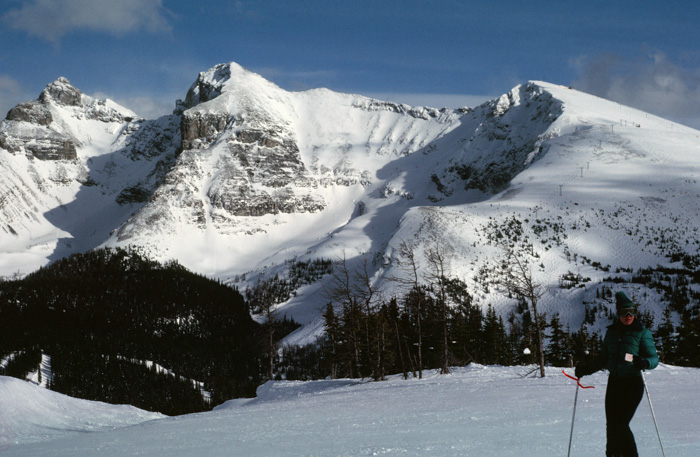 Yes, Sunny Alberta! What a difference a day makes.

On our last day we drove to Kicking Horse Pass. We wanted to see the famous spiral tunnels that take the Canadian Pacific over, er, under the Continental Divide. We hung around to see a train go through and I thought I had a picture of both ends of the train projecting from the tunnel, but I can't find one.

We were able to score the car because Penny Hanshaw agreed to be our "third" even though she was planning to stay at the hotel and pack!

We also visited several pools in Yoho National Park. Much of the park was not accessible in winter -- at least not without special equipment or guides. It would be a great place to revisit in the summer or fall.

The beautiful color of the water is supposed to be due to glacial silt, but its clarity seems to deny that. 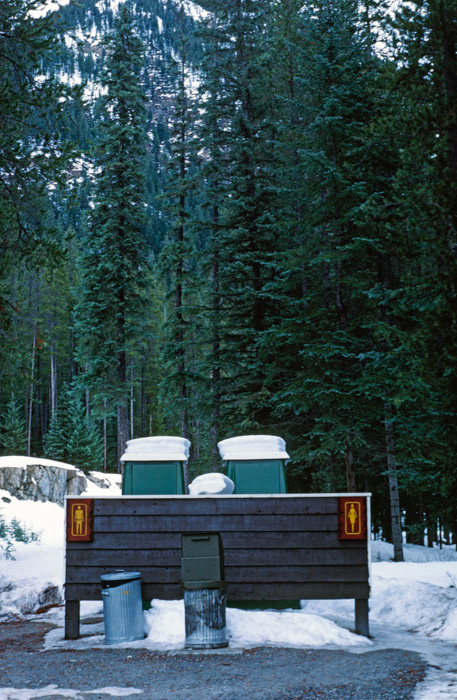 Perhaps this is a tacky end to a beautiful trip, but Jim and I were captivated by this discreet and tasteful setup of port-a-potties.

I don't know why we didn't go on other trips run by Norm, because this was an exceptional expedition with lots to see and lots to ski!