The first week of our Canadian jaunt was to Whistler/Blackcomb in British Columbia. 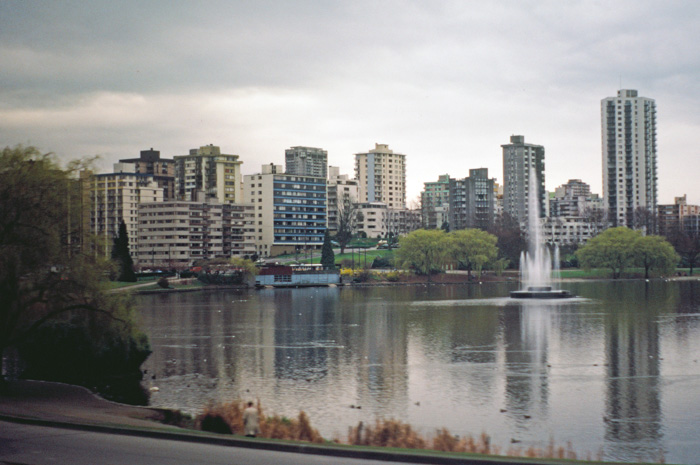 We flew from Washington to Vancouver. It is a beautiful city and although we didn't spend any time there on this trip, we have returned since. 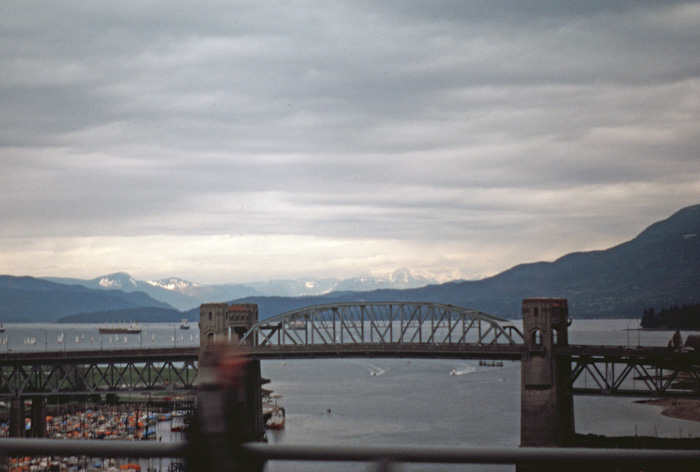 We saw a good bit of precipitation in this wet part of the world.

The bridge is the Second Narrows railway bridge.

The bus driver gets the credit for another bit of "wisdom" we have pondered over the years. As we drove north from the city along Burrard Inlet, we crossed numerous bridges spanning gullies filled with debris. If you look in this picture you will see a row of light standards on the right side. These demarcate a bridge.

The driver told us that torrential rains often washed out bridges on this road, but you could always tell when a bridge was out if the lights were not on. He didn't have anything to say about how you knew that lights were SUPPOSED to be present at any particular location! 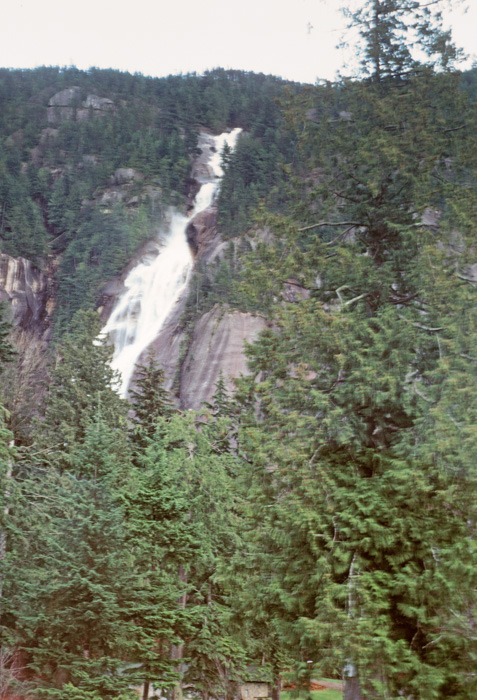 One of the many waterfalls that we passed along the way. It is water like this that washes out the bridges -- especially when it picks up debris along its course. 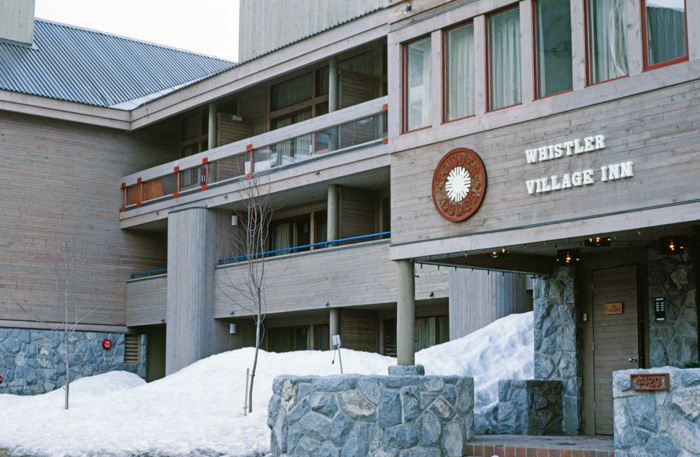 Although the name is the Whistler Village Inn we were actually staying at the base of Blackcomb Mountain. It was a very nice place to stay and convenient to the Blackcomb base lifts. Each room had a kitchenette, which made entertaining easy.

Whistler is notoriously damp and our trip was no exception. It was often foggy or raining at the base and sunny or snowing at the top. 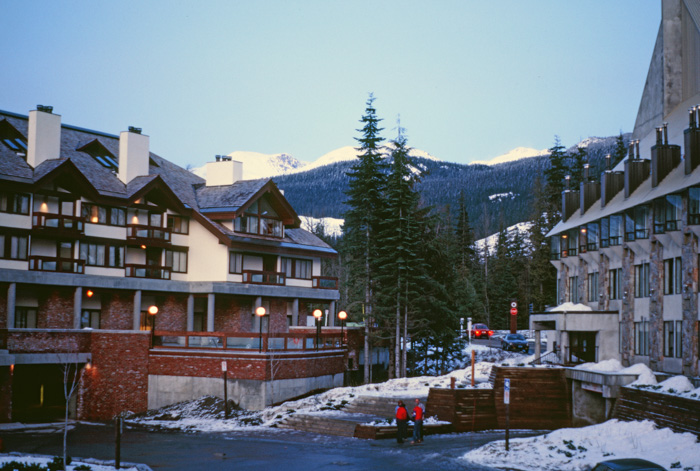 The same view on a sunny day. We did have a few. 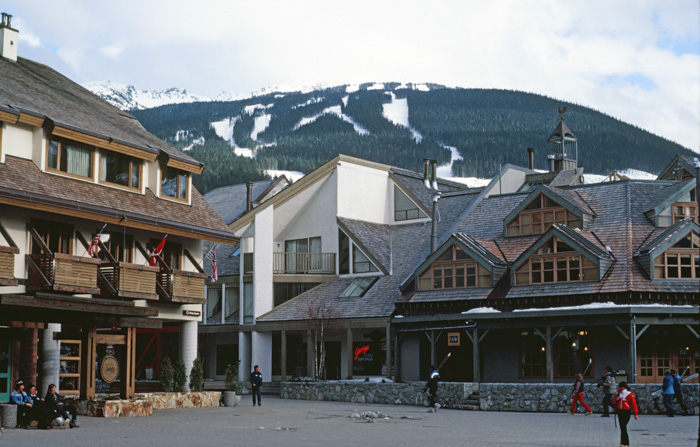 The base village was modern and compact. Just about everything was in easy walking distance.

The slopes in the background are on Whistler Mountain. 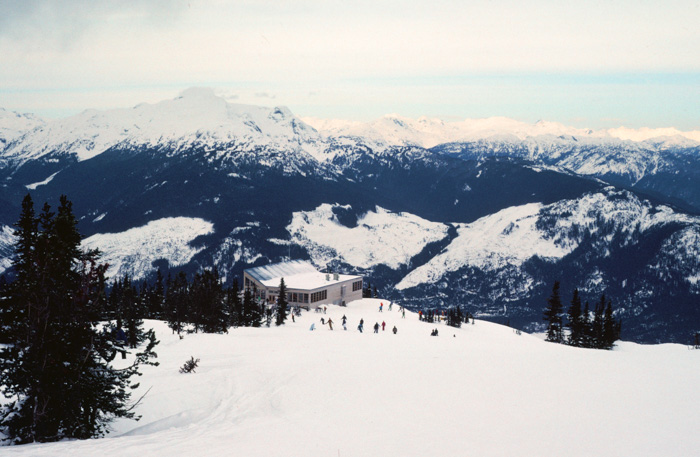 Whistler/Blackcomb has been much developed since we were there so many years ago. My slide note says "Blackcomb summit with cafeteria." Best I can tell from a modern trail map, this is the precursor to Rendezvous/Christine's. It is much more upscale nowadays. 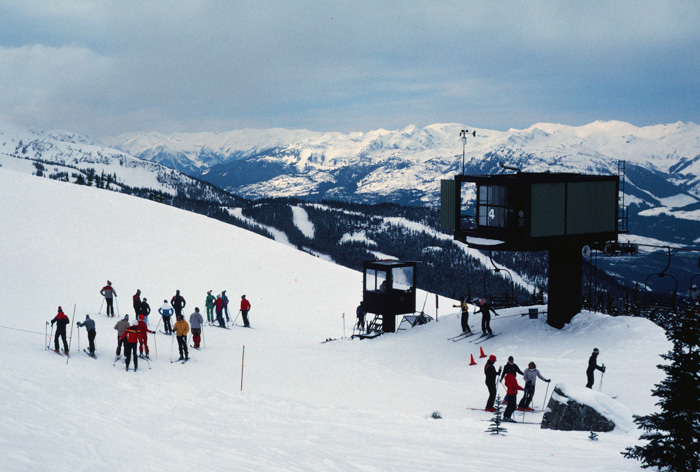 The view from one of the Blackcomb trails.

We did most of our skiing on Blackcomb. At the time it had the largest vertical (5280') of any North American mountain. Revelstoke, also in British Columbia, has surpassed it at 5620'. Of the top 10 we've skied 5: Whistler-Blackcomb, Telluride, Snowmass, Big Sky & Jackson Hole. 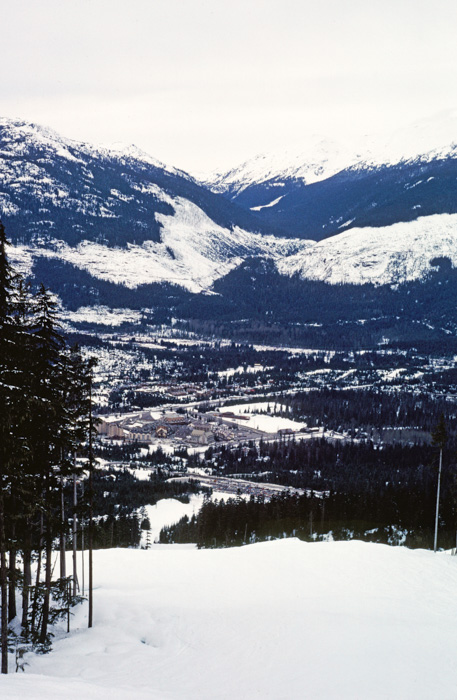 The base village as seen from Blackcomb mountain. 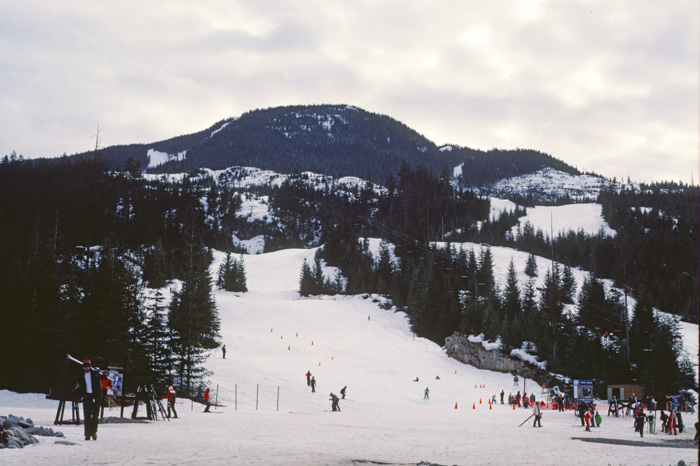 Whistler as seen from the base village.

This pretty much sums it up.

Even at the time the US resorts were paranoid about litigious skiers. It has only gotten worse. The Canadians had a better attitude about individual responsibility. 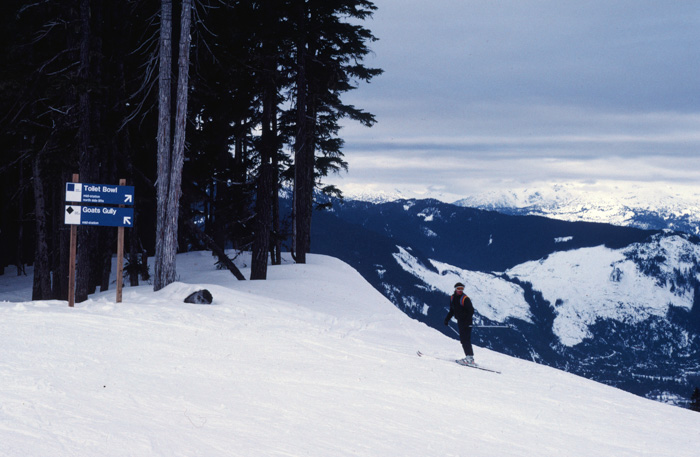 I had to laugh at the name "Toilet Bowl." According to a web site that explains many of the whimsical names at this resort, its origin was: "Toilet Bowl - This amusing name was for a very narrow area that suffered a lot of congestion (it has subsequently been widened significantly). In the days that Woodfibre pulp mill was in operation on Howe Sound you could often smell the pollution from the mill at this point in the mountain, adding to its 'charms.' " 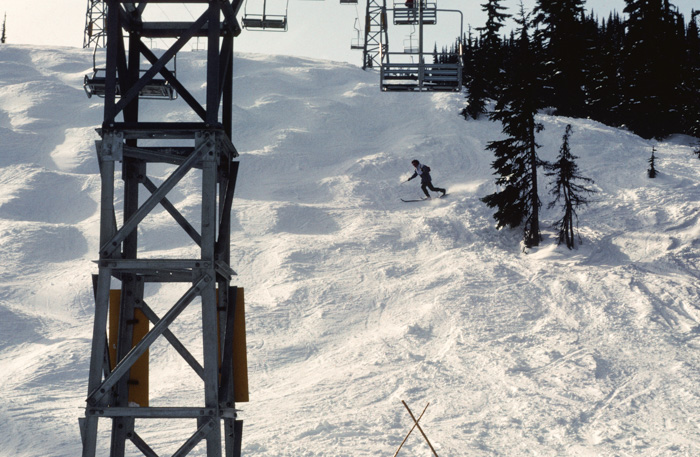 In those days Telemark skiers were just reappearing on the ski slopes. It was enough of a novelty that I had to take a picture.

As the info at the link says there was a heyday for this style, but you don't see it too much anymore. It's difficult, but done well, very graceful. 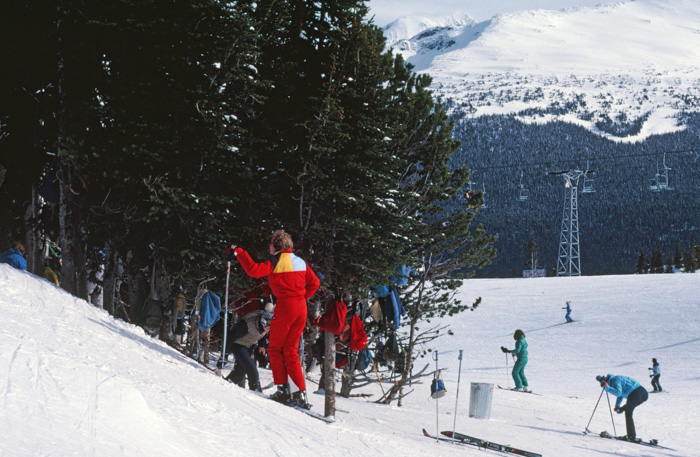 We were fascinated by the low-hanging day-pack fruit. Lockers abound in US resorts because of fear of theft, but the Canadians simply hung up their day-packs in the trees. We bought our day-pack on this trip and still have it.

Yes, we hung it in the trees. 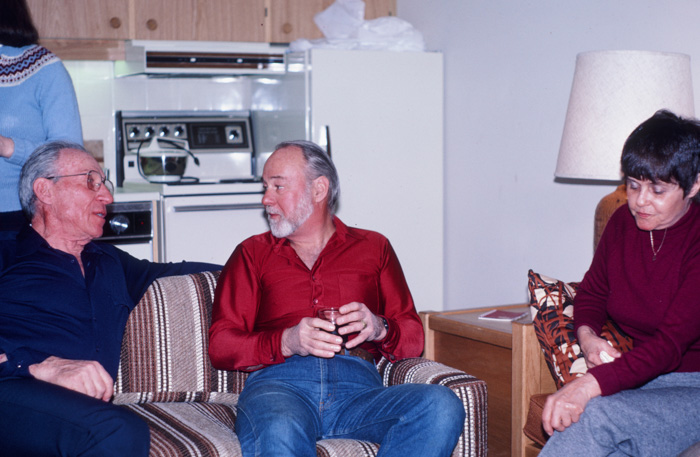 As is always the case with PVS ski trips, après ski get-togethers are a major feature.

Leader Norm Engleman is on the left. Bruce Hanshaw is next to him. Bruce had a horrid experience on this trip. He was getting on the lift with Jim and me one morning and the simple turn to watch for the chair threw his back out. He had to take the chair back down. He was in great pain thereafter and flew home on his own from Vancouver.

Since I've developed back problems of my own I now have a deeper appreciation of how they can jump out of nowhere.

My slide identifies the woman on the right simply as Dorothy. I do not otherwise recognize her. 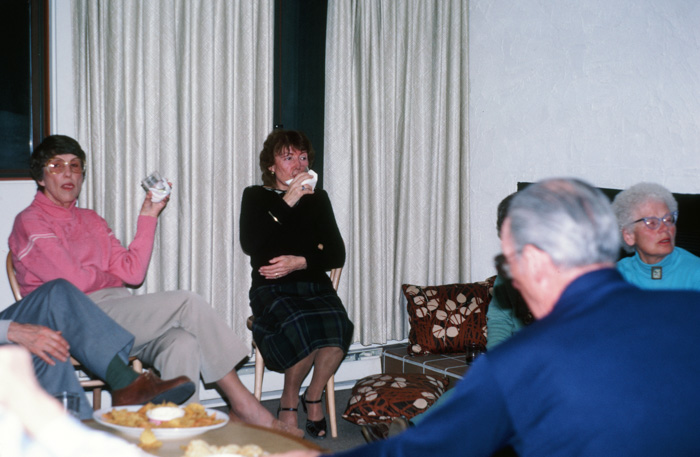 Facing the camera, from left to right: Alice Swalm, Svava Vernhards, and Jenny Larson. We lost track of Svava, but the rest of these wonderful folks have passed on.

I can't explain the ghostly apparition in the center!

The view from Whistler toward Blackcomb.

I'm sure I skied at Whistler more than once, but the only day I remember was a Sunday. A small chapel on the slopes hosted a brief service. I can't find the chapel on the current trail map so I suspect it no longer exists. 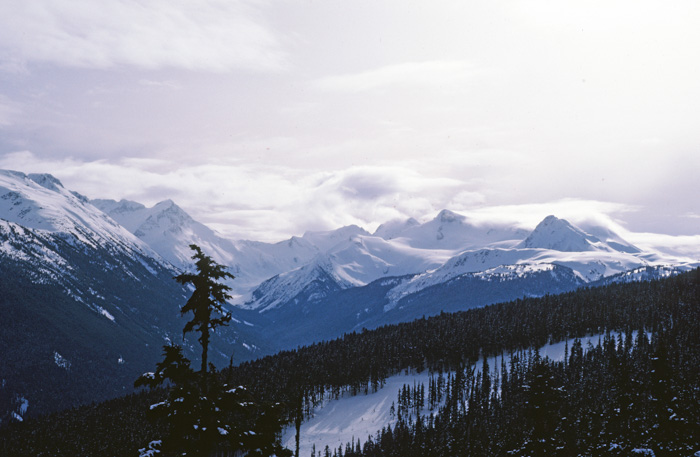 View from the summit of Whistler.

Once upon a time I went to a women's retreat. As part of the get-to-know-you in our small groups we described our ideal holiday. Everyone in my group chose "the beach" except me.

The mountains for me! Winter or summer. 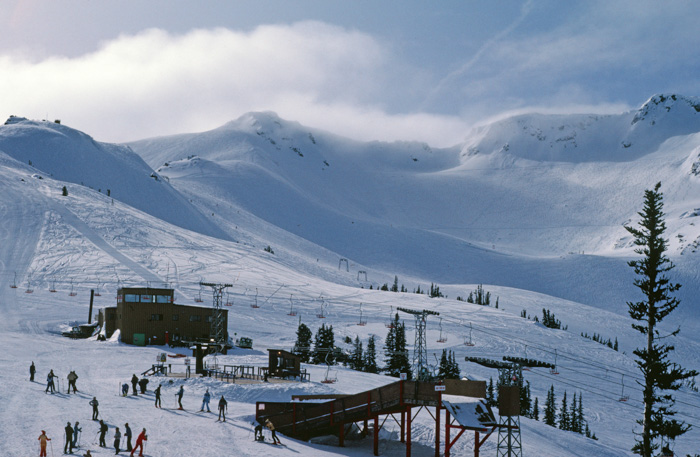 The bowl at the summit of Whistler. Wide-open skiing! Some places had ferocious moguls -- it seemed as if they were the size of VW beetles. 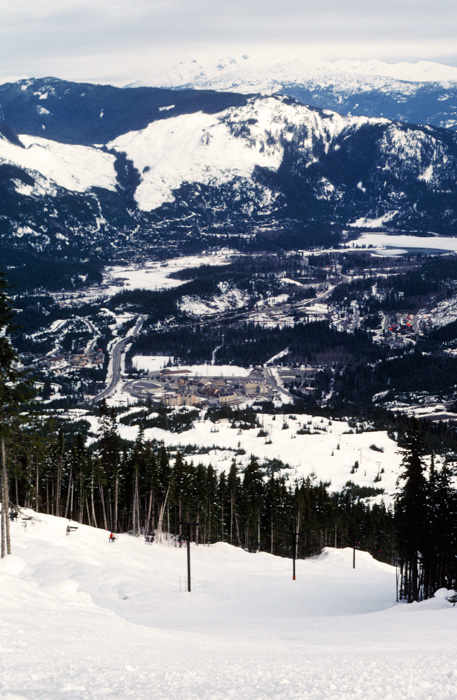 The base village from Whistler Mountain. This angle gives a better view up the valley. Vancouver is down the road to the left. 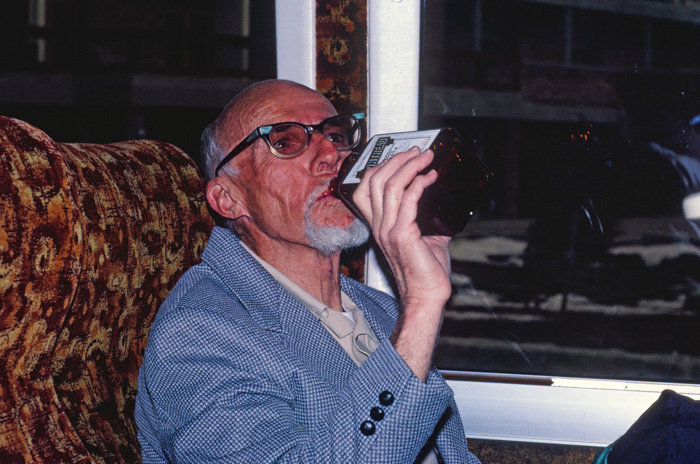 All things come to an end and too soon it was time to move on. We boarded the bus in the early dawn hours for our trip to Vancouver and Calgary.

Dean is fortifying himself for the road back along the inlet -- just in case any bridges are out. Cointreau is the same as orange juice, right? 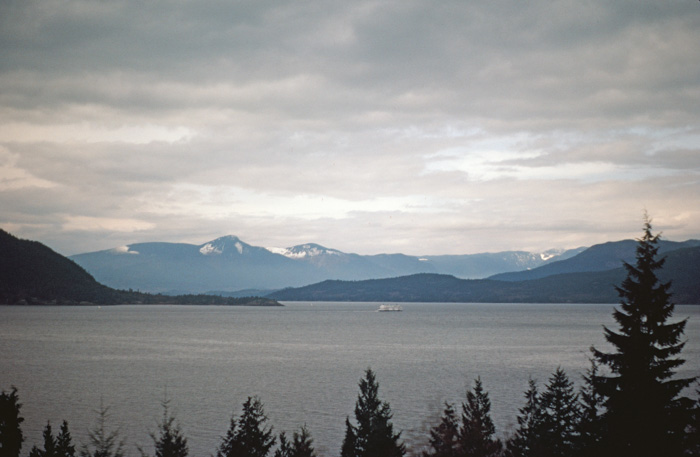 We had another beautiful drive along Burrard Inlet back to Vancouver. You can see the Vancouver ferry in this image.