I don't remember if it took two or three days to reach Cumberland, normally a three hour drive from our home in Reston, but we got there. Besides visiting sites within the city I went to the First Presbyterian Church on Sunday morning. The congregants were welcoming and one couple even invited me to lunch! I declined, but they offered suggestions on a number of things to explore in the area -- one of which was the National Road. We were off again! We did not explore the National Road as far as Wheeling, but we did follow US-40 on much of our route home. 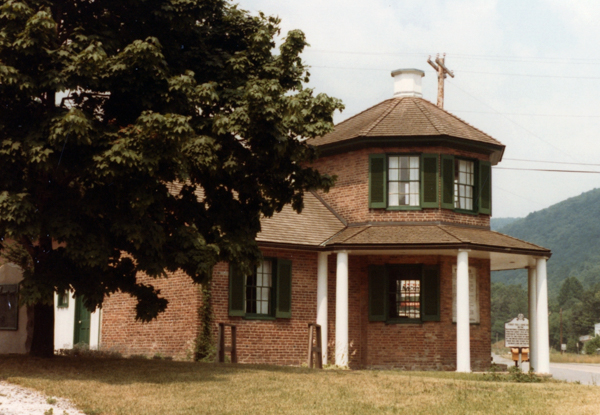 The National Road originated in Cumberland and the first toll house was at La Vale. It was originally white but at the time of our visit the white paint had been removed. It has since been restored. 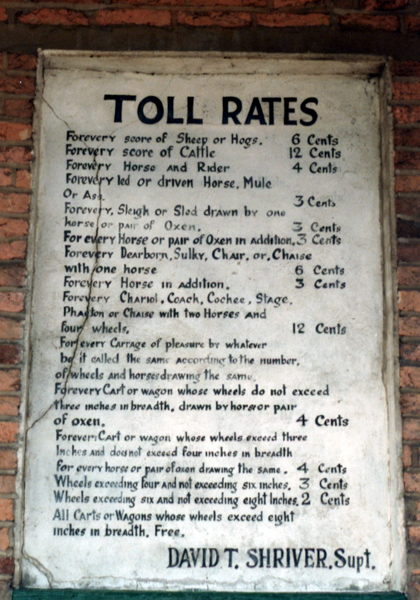 The toll plaque is built into the wall. The wider the wheels of your cart, the cheaper the fare. Over eight inches traveled free.

I am amused by the explicit charge for a four-wheeled vehicle with two horses. It is 12 cents regardless of what you choose to call it. I expect people were quite eager to argue over a name in hopes of a cheaper toll.

A brief essay on the National Road and it's impacts can be found on the Federal Highway Administration web site. It ends with a statement that sums up our trip: "We scurry along at a hurried pace today, but when we want to relax, take our time and see some sights, we once again travel the National Road." Or the C&O Canal. 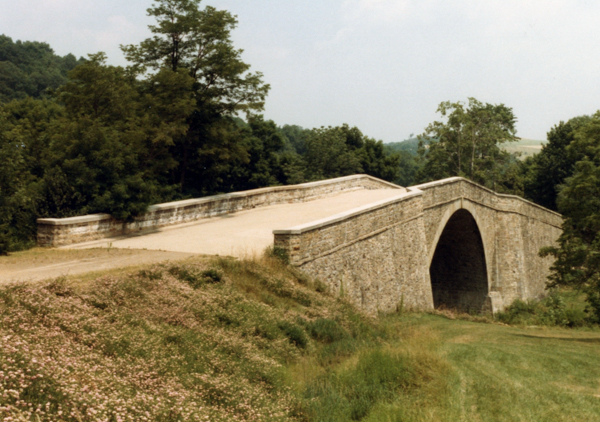 We followed the road west into Garrett County. Along the way we stopped to see the Casselman Bridge, at one time the largest single stone arch bridge in the US.

The Wisp Ski Area, now a four-season resort, the force that brought us to western Maryland for so many years, is located in Garrett County. Whether you look at the Int'l Energy Conservation Code (IECC) map for an analysis of building expectations or the USDA plant hardiness zone map you will see a line between Cumberland and Garrett County. The temperature might drop 10 degrees in about 1/2 hour of driving through this area in the winter. Not so much in the summer heat. 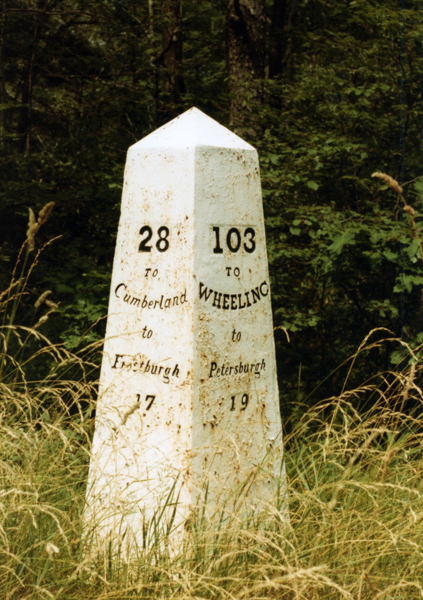 A National Road mile marker denotes the western reach of our excursion. We needed to head home. Our holiday was almost over.

Frostburg was the home of a really nice French restaurant that we visited several times during our travels to western Maryland.

Of all the towns with "burgh" in their names, only Pittsburgh was allowed to keep that spelling.  All the rest had to change to the prosaic "burg" spelling. Even though Pittsburgh kept the spelling, the pronuciation is PittsBURG rather than PittsBORO. It was a German conspiracy! 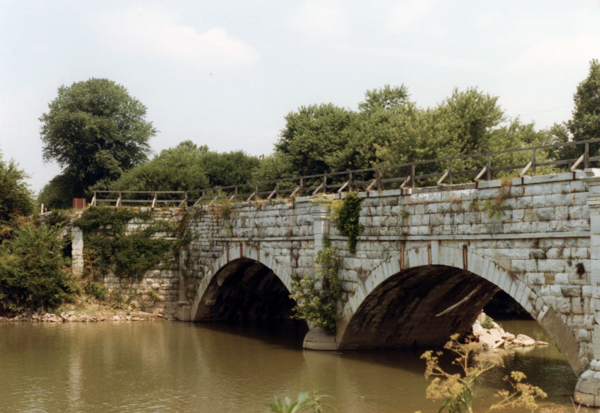 The C&O Canal had several aqueducts to carry the man-made waterway across intersecting natural waterways. This one at Williamsport crossed the Conococheague Creek. The history at the link gives the travails endured by this structure. 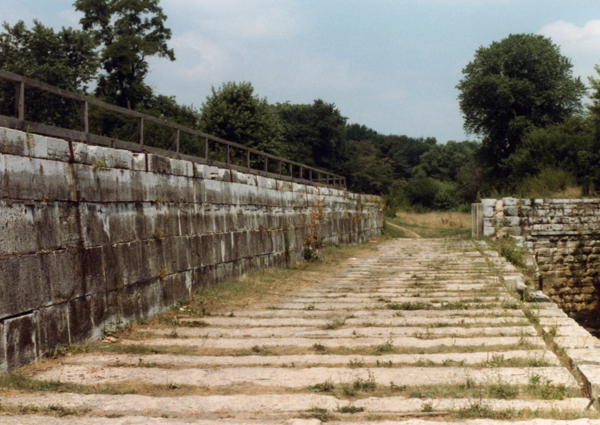 As can be seen in the link above, one wall of the aqueduct collapsed several times. The original masonry wall failed in 1865 as a result of damage inflicted during the Civil War. It was restored with a wooden bulkhead until the masonry was rebuilt in 1871. A partial collapse in 1877 was repaired. That repair held until 1920 when a canal boat fell into the creek during another failure. It was again repaired with a wooden bulkhead that lasted until the canal went out of service in 1924.

In the succeeding years the wood rotted away leaving this partial aqueduct. Restoration started in 2017 and will return it to its 1920 state with the wooden bulkhead. 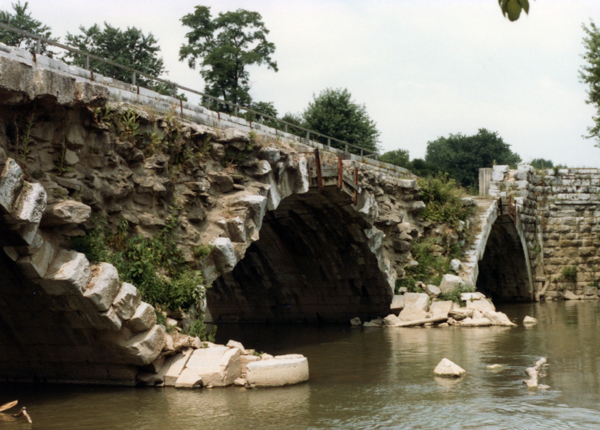 The unrestored upstream side of the aqueduct.

There were several teenagers having a grand time swimming in the creek at the time of our visit. They had rigged a rope onto a tree limb in order to swing out over the water and plunge in. Our adult selves deplored the danger (who knows what hazards are underneath the surface), but our adolescent selves were envious! 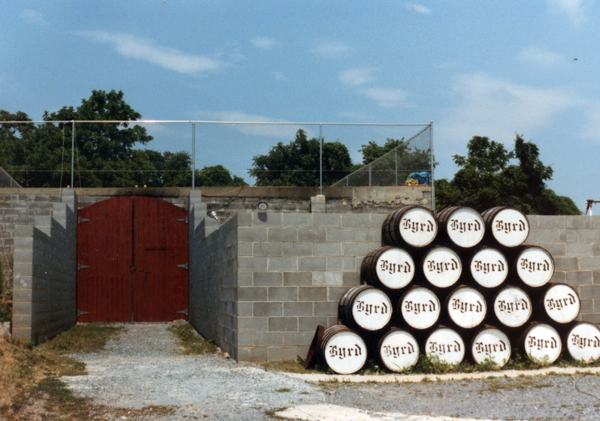 As we rejoined US-40/National Road heading toward Frederick, we discovered Byrd Vineyards in Myersville. This no-longer-extant winery made some killer cabernets at its height. The wines attracted notice from Robert Parker and the New York Times. We bought a bunch over the years until the winery expanded beyond its ability to produce a quality product and closed. We still have at least one bottle. Some have not held up, but many have.

It may be the only winery that was built underneath a tennis court!

There are a couple of wineries around now (2019) called Byrd: Byrd Cellars in Virginia and Byrd Vineyards in California. There is no relation to the Maryland winery. 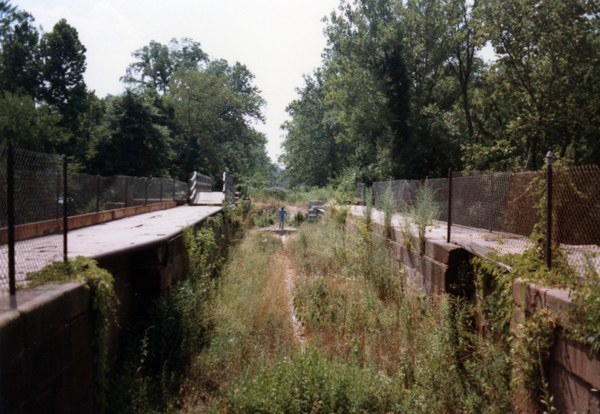 From Frederick we didn't quite make a beeline home. Instead we decided to cross the Potomac yet again at White's Ferry. We had a last visit to the C&O Canal while we waited. 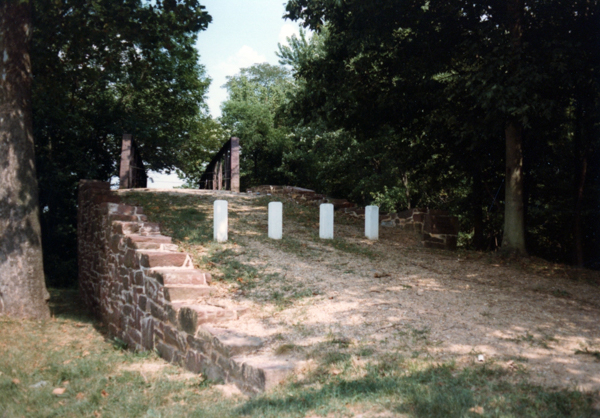 The former roadway across the canal to the ferry. 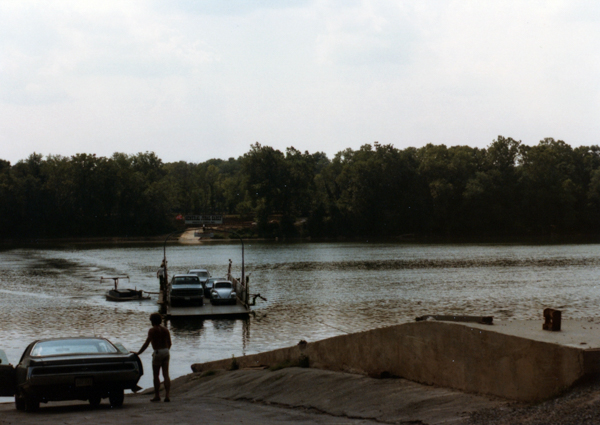 There wasn't a lot of traffic at the time we crossed, but the ferry is used by some as a regular commuter route.

The ferry boat, which has been replaced many times over the years, is traditionally called the General Jubal Early after the unreconstructed Confederate general who was one of the proponents of the revisionist Lost Cause ideology. News flash: The "Lost Cause" positions fly in the face of documented facts. Do the research: the Civil War was all about slavery.

Our holiday was at an end, but our time with the canal was not. Since we had been to the Cumberland terminus, we thought it only right to visit its origin in Washington, DC. That could be done at our leisure.