Piecing together this trip from the mists of time has been a challenge. None of the pictures have labels and both of our memories have lost track of details. When we left Charles Town, I believe we had a notion of crisscrossing the Potomac River towards our destination. We had done something similar by taking ferries to and fro across the Mississippi River downstream of New Orleans in the spring of 1983, and that may have been our inspiration.

In any event, after leaving Charles Town, we headed for the closest Potomac River crossing: Shepherdstown, WV. 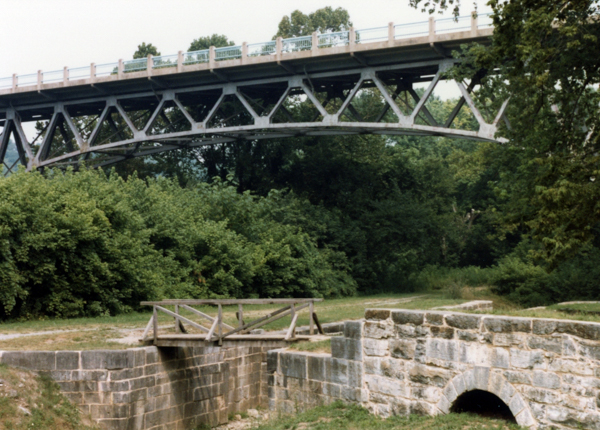 We intersected the C&O Canal again at Shepherdstown. Lock 38 is below the highway bridge that has since been replaced. This must have been the spot where canal exploration merged with the Potomac-River-crossing theme of the trip.

No matter how unstructured we tried to be, we quickly had a theme! 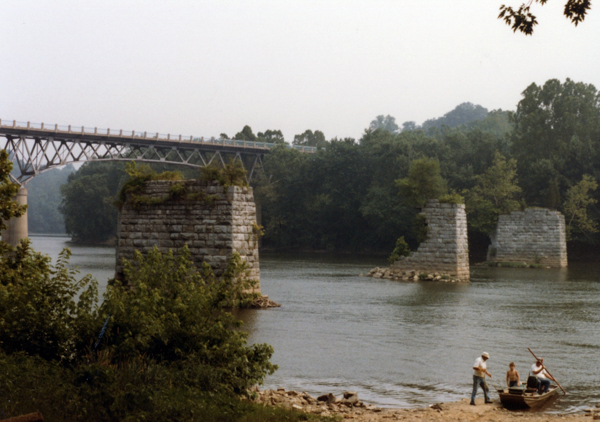 The masonry piers upstream of the lock & bridge are remnants of a toll bridge destroyed in the 1936 flood. A ferry crossed the river until the now-demolished bridge in the background was completed. 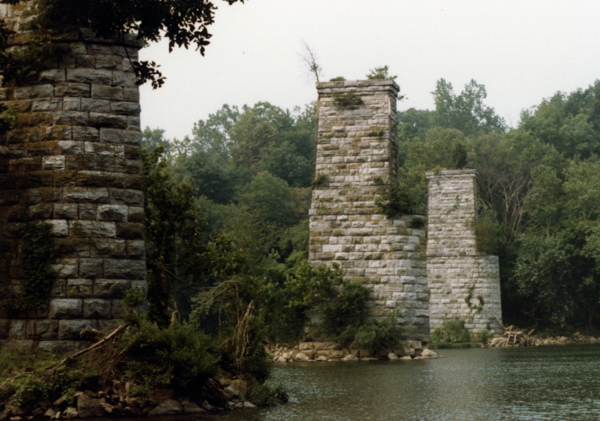 Remnants of a railway bridge downstream of the lock.

I'm curious about the upstream bulkheads. Perhaps they provided additional stability in floods. 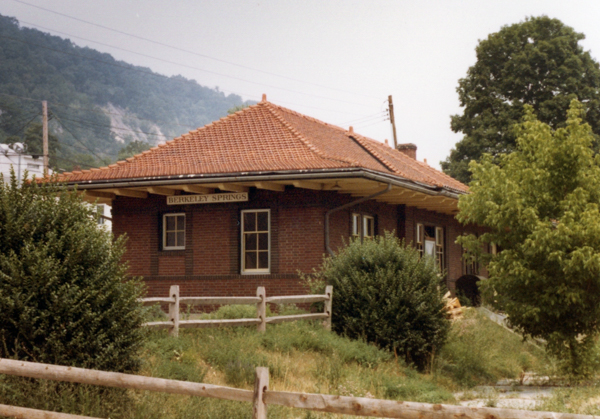 Berkeley Springs (Town of Bath), West Virginia, has been a resort since at least the 18th century. It bills itself as "the country's first spa."

The train station was used for municipal offices at the time of our visit, but had fallen on evil days by the early 21st century. A local group is rehabilitating it to its 1915 state.

We were amused by the signs welcoming us to town and the parenthetical references to "Town of Bath." Nowadays the historic district is designated Town of Bath, but it is no longer referenced on the welcome signs. 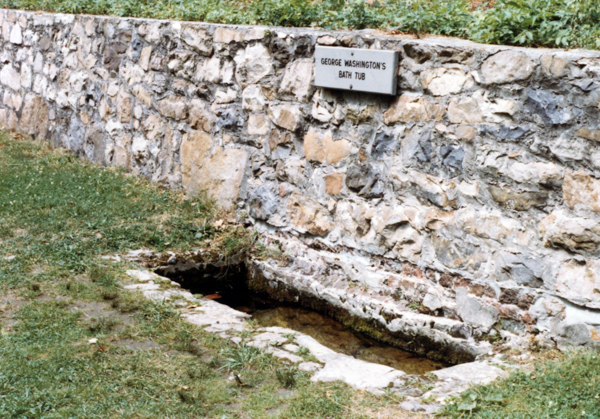 In a twist on "Washington slept here," this depression is called George Washington's Bathtub. Washington did in fact participate in founding a town around the warm springs. The original intent was to call it Bath, but there was already a town by that name.

The "bathtub" is not original and was not used by Washington! 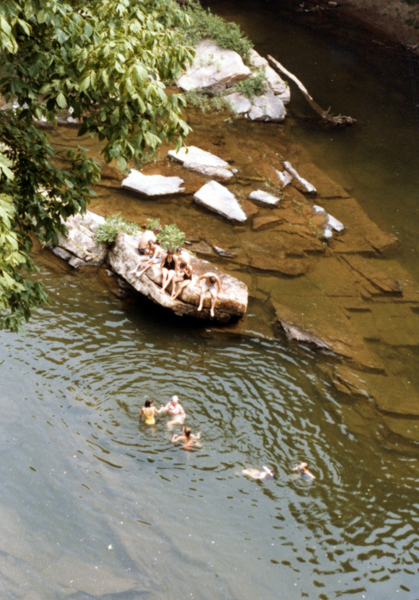 Our destination after Berkeley Springs was the Paw Paw Tunnel on the C&O Canal. We traveled WV9 crossing the Cacapon River at least three times. These folks were having a great time cooling off at the "old swimming hole" in the river. It was hot!

Right before this trip we had installed a gas-saving option on our car. It cut the air-conditioning off when the engine was working hard. In the West Virginia mountains, the engine is always working hard traveling over ridges so the air conditioning was seldom on. We were hot and that river looked inviting! Jim uninstalled the gas-saving option after we returned home.

One of my college chums lived on the Cacapon River farther south where it is shallower. I visited her home one Thanksgiving and was astonished to learn that they used the river as a short-cut to get around. The family had a Jeep, and my friend thought nothing of simply driving into the river and travelling up or down stream. With its rocky bottom there was no worry about getting bogged down like there would have been in streams where I grew up. 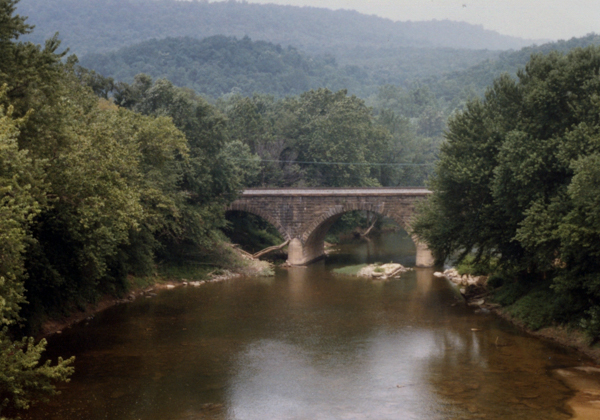 This stone arch bridge may (or may not) be at or near Paw Paw, WV. I've found a few pictures online that match it, but I've not been lucky at pinning down its exact location. It looks like a railway bridge to me, which makes it harder to find on Google maps. 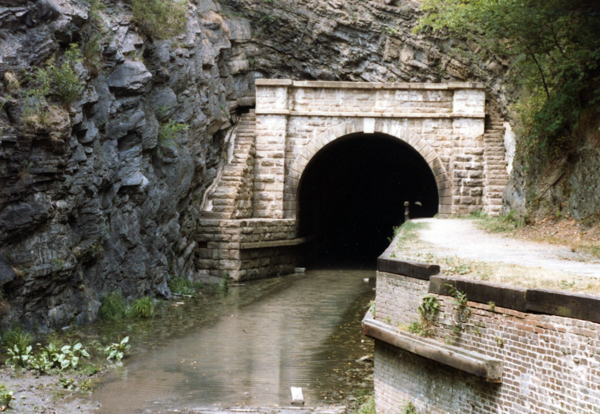 There is no ambiguity about this: the western entrance to the Paw Paw Tunnel on the C&O Canal. There is a cool segment at the link of a 1917 silent film showing a boat traveling through the tunnel when the canal was still in operation.

If the canal had followed the river at this point, it would have been a LOT longer due to several horseshoe bends. 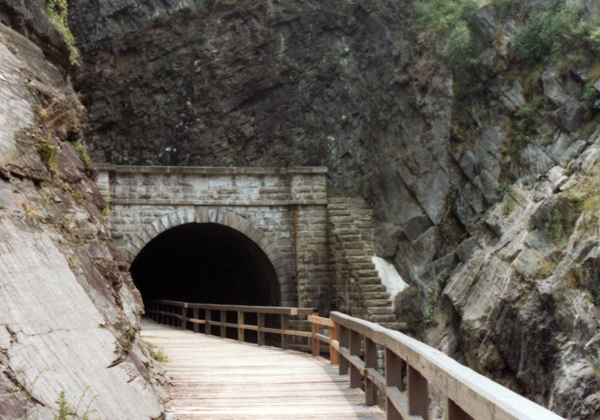 The other end of the tunnel.

We walked through and back again.

It was eerie on the inside. I amused myself by imagining riding a horse through. No thanks. 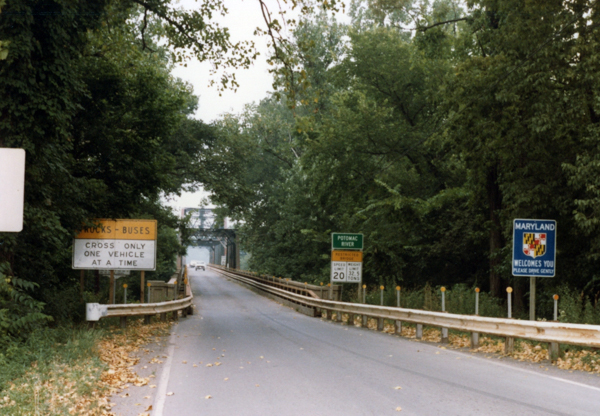 After visiting the Paw Paw tunnel, we were back across the Potomac into Maryland. Neither of us recalls the exact location of this one-lane bridge across the Potomac and I can't find it anywhere on Google Earth so it may have been removed. I've put it here in the sequence of pictures simply because I can't figure out where else we may have crossed the river in this direction.

There is a much newer bridge at Paw Paw nowadays that may have replaced this one.

Another picture that we're having trouble placing in sequence. This is one of the old Western Maryland Railway (WM) bridges across the Potomac -- perhaps bridge #6, but many of them looked similar. Bridge 6 crosses the river near the Paw Paw Tunnel.

The Western Maryland Scenic Railroad runs on some of the old WM tracks (not over the river). We visited it as part of a Smithsonian Excursion many years later.

Looking from Lock 73 towards Lock 74 in Allegheny County, MD. 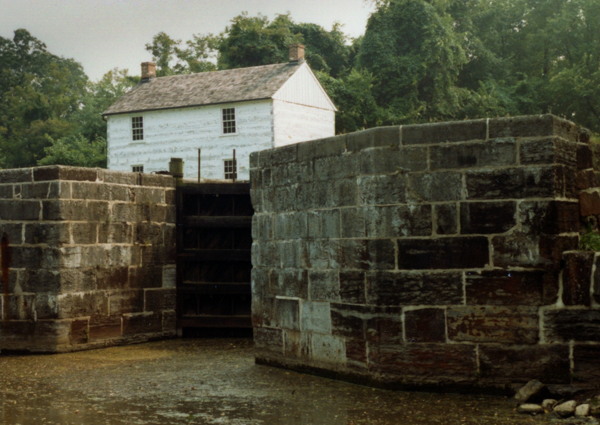 Lock 75 is the last numbered lock on the canal.

As we neared Cumberland, we found this replica canal boat, built in celebration of the 1976 Bicentennial.

The mule shed is in the middle of the boat. Mules were the motive force for canal boats, and each boat had at least two. One rested while the other towed. The mules lived on the boats when not working unlike stage coach horses that were swapped out at regular intervals. 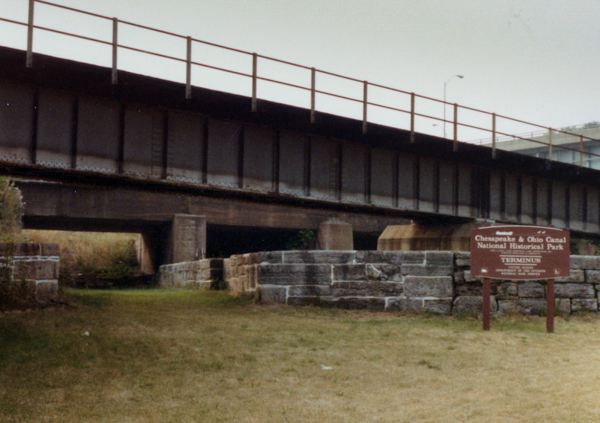 The terminus of the C&O Canal at Cumberland makes a triple crossing of sorts with the railway bridge crossing the canal and the highway bridge in the background crossing the railroad.

A few years after our visit the WM headquarters was taken over by the Western Maryland Scenic Railway.

While in Cumberland we stayed at a recently restored historic hotel since converted to apartments. The entire downtown is an historic district managed by a Preservation Commission that oversees this and other historic districts in the city. The preservation movement was just getting started at the time of our visit, and we remember that much of the downtown and nearby residential districts were a bit seedy. We're glad this beautiful little city is hanging on although, according to Wikipedia, the economy is still struggling.

One of the high points of our stay was a delightful Italian restaurant located underneath the elevated highway through town. We no longer remember the name and I can't find anything that looks like it.