We spent a week in Zürs skiing our brains out. It was a good thing because the pickings were slim in Innsbruck.

The city, which was the host for the 1964 and 1976 winter Olympic games, is surrounded by a variety of ski venues. Many, if not most, European ski areas need some travel to get from the hotel to the lifts, but in Innsbruck it took a VERY long ride to get to any of the areas. The snow in all of them was awful this year. Mutters, the closest to the city, was only partially open. The only two areas I am certain we skied were Axamer Lizum, which was about a 45 minute drive, and Patscherkofel.

But skiing wasn't the best part of our time in Innsbruck. It was there that we discovered rodels - small one or two-person sleds. One evening the group had dinner at one of the areas offering nighttime sledding. We took a lift to the restaurant and had a lovely dinner. Before it got too late, Margaret hustled us out to set off down the "rodelbahn" after a short training session. She wanted to make sure we got down before the natives because it gets a little rowdy. The track zig-zagged down the slope with lanterns marking the hairpin turns. It was terrific fun. 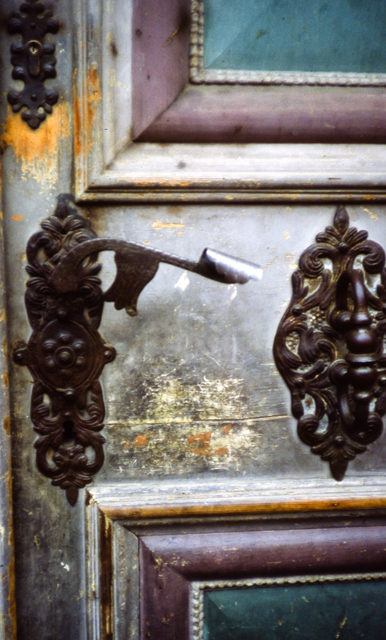 I've always been fascinated by doors and I have numerous pictures of them. 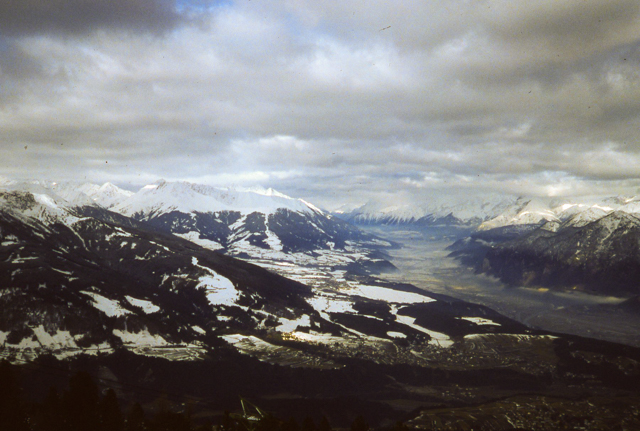 This picture of the Inn Valley from the Patscherkofel area shows how snow is limited to the higher elevations – generally above the tree line.

The valley itself is quite hazy. 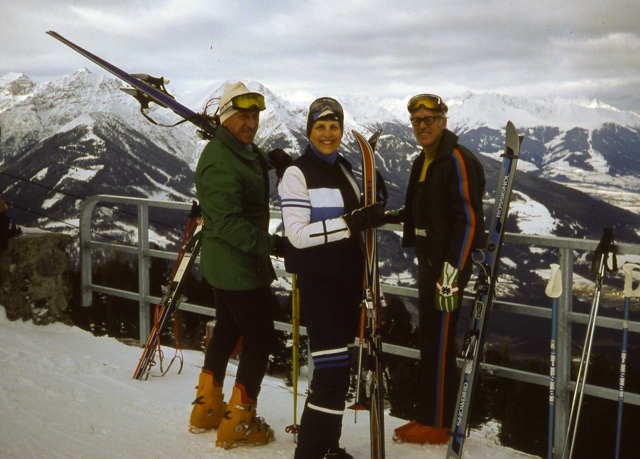 Jacques had been on our 1977 honeymoon trip to Zürs, but fell and broke his ankle on the first day! He was glad to get back and finally ski the place!

We ended up spending a couple of days with Alice on our return home.

After a delightful skiing holiday, we bussed to Munich for our flight home. Our planned routing was from Munich to New York's Kennedy Airport to Washington National. While awaiting our connection in New York, we heard an announcement that all flights into Washington were cancelled due to snow! Margaret and Bob rounded everyone up, bundled us into taxis to Penn Station, and got us tickets on the train.

When we arrived at the station, it was a madhouse with everyone trying to get on the last train south. One of our group, Rosemary Soler, had injured her ankle skiing. We didn't realize that would turn out to be a blessing in disguise. Somehow Margaret got her into a wheelchair and wheedled permission to board Rosie early along with her "family." Imagine the conductor's surprise when the family turned out to be a group of about thirty skiers! That early boarding meant that we got seats for the trip south.

The train turned out to be the last transportation into Washington for several days. I don't know how they found out in those days before cell phones, but fellow PVSers Ray McKinley and then-wife Malle met our train when it arrived in the wee hours. Jim and I lived in Reston, over 25 miles away, and had no prayer of getting home. Alice graciously invited us to her place unaware that it would be two days before we could leave. We were thankful that the McKinleys had brought groceries! That storm became famous as the Washington's Birthday Storm.

There was an "only in Washington" quality to this event. Thousands of farmers had driven their big tractors to the city in an organized protest against farm prices that were below the costs of production. They were able to augment the inadequate area snow removal equipment and also delivered medications and got people to the hospital if needed.

Our luggage didn't arrive for a day or two. Ever since this time I've been careful to pack a change of clothes in my carry-on baggage!