In 1975 I joined my parents, Emmett & Ellena Ward, on a trip to Montreal for the 1975 American Bar Association convention. While I was growing up the major focus for family vacations was visiting relatives. Later most of my parents' vacations were to Bar Association meetings of one kind or another. I was able to tag along to several of these including this one to Montreal.

My mother's brother, Lewis Cutrer, and his wife Catherine were also in Montreal. I remember one dinner where he and my mother signed up for the buffet, which included whole lobster. They got their money's worth. Unfortunately I didn't get any pictures of that achievement!

Buckminster Fuller designed this dome for the US pavilion at the Montreal 1967 Expo.

At the time we visited, the sphere was called the Biosphere and was used as a public attraction.

Not long after we visited a fire destroyed the acrylic skin, but it was later restored and currently houses a museum focusing on the Great Lakes-St. Lawrence River ecosystem. 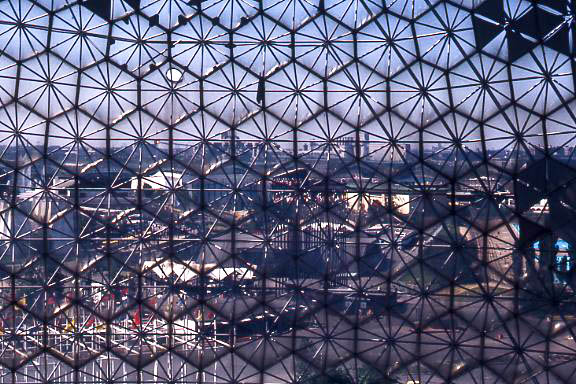 The structure of the sphere supports itself.

This view is from the inside looking out.

An overview of the Expo grounds shows some of the varied buildings. The Biosphere dome is recognizable, but I can no longer remember the other buildings.

This close-up of the exterior of the Iranian pavillion shows the intricate tile work. I was fascinated by these columns. 1967 was a time when Iran was more engaged with the world in a positive way. 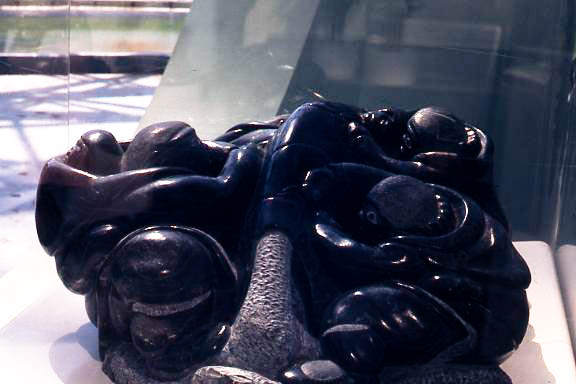 While in Canada we all became fascinated with the soapstone carvings sold as Eskimo art.

In recent years there has been controversy over the use of the term "Eskimo" which some find offensive.

Everyone can agree that the art is lovely. We bought several carvings that I still enjoy today. None so intricate as this one. 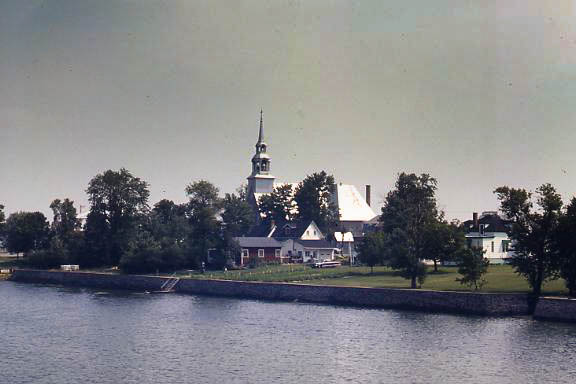 While in Montreal we enjoyed a cruise along the St. Lawrence River. We passed many charming villages. 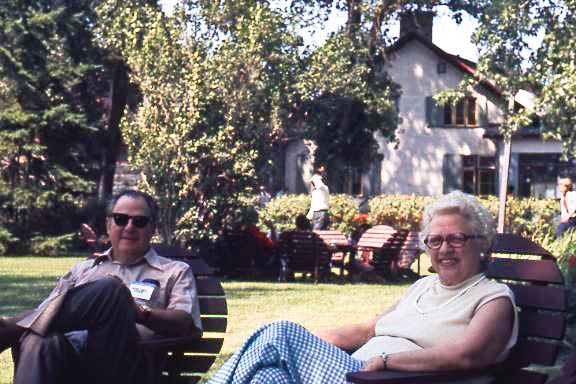 As part of the cruise we stopped for lunch at this auberge.

After lunch we had time to relax in the garden.

In addition to the St. Lawrence cruise we took a tour of Montreal city. At the time my old camera, which lacked a wide-angle lens, made it difficult to get good city photos. I was able to capture this picture of the interior of the Basilica of Notre Dame.

The church is on the Place d'Armes in the old section of Montreal. 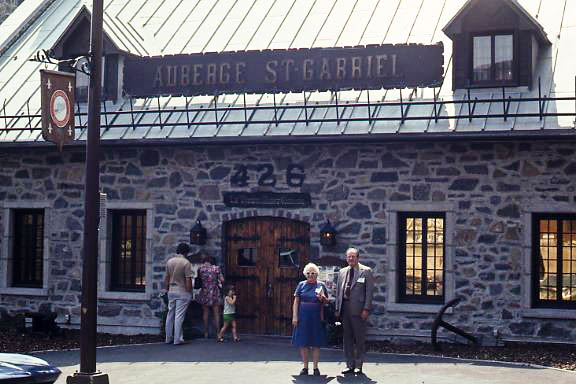 One meal was at this inn, which claimed to be the oldest inn in North America - established prior to 1754. It was given Quebec's first liquor license at that time.

At the time that we visited, they had a medieval dining experience that entailed lots of food eaten with fingers or knives without such modern inventions as forks.

It is now a distinguished French restaurant where meals are consumed with more decorum.

Another memorable meal was at Le Caveau. Jim and I ate there some years later. It has since (deservedly) closed. 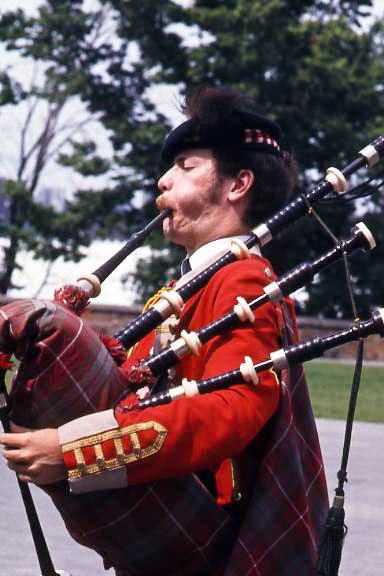 One afternoon we visited an old fort where we were treated to a military drill or tatoo in full Scottish regalia.

My terse notes on the slide don't specify the location of this event, but I believe it was the Old Fort on Île-Ste-Hélène. 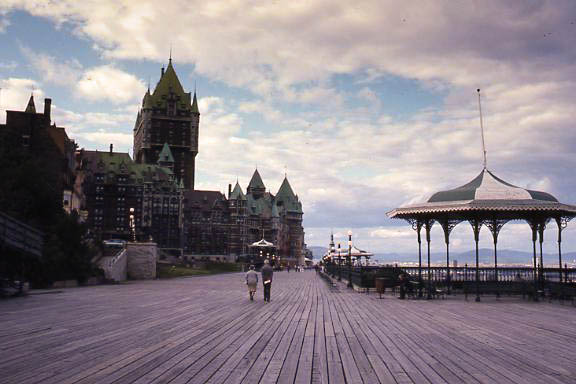 The iconic image of the city is the Le Chateau Frontenac, which is a luxury hotel. Someday I would love to stay there.

My main memory of Quebec is showing off to our guide, who was mighty cute, that I knew the names of all the Canadian provinces. He said I was the first American he had met who could do that. At least there aren't 50 of them. 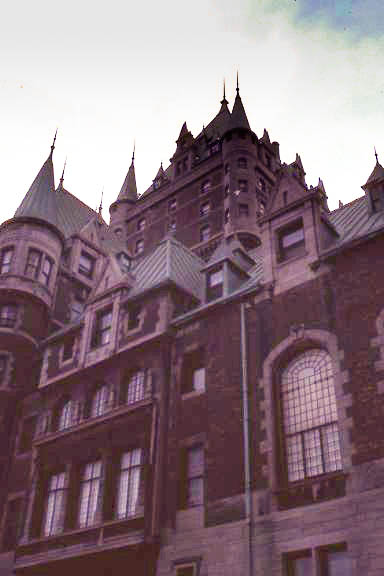 The above picture doesn't give any indication of the steep bluff that the city surmounts. We walked down along the river - looking up to the Chateau is enough to give a mountain goat vertigo.

In 1976 I traveled to Toronto for a computer conference for users of the System 2000 database system. This was a flashpoint in my ongoing struggle as a woman in a technological position. I only got approval for this international trip because I had written a paper that had been approved for presentation and publication. It described a new interactive interface to the product that I had developed on my own initiative. After I returned, I was informed by my boss that I would no longer be assigned to the System 2000 project. He was transferring it to one of my (male) colleagues. I guess I was getting too uppity. Upon hearing that news I got a bit explosive and my colleague decided that maybe he didn't want the assignment after all.

I returned to Montreal once again, I forget the year, for a SHARE computer conference. Jim joined me and we had a great time. We revisited Le Caveau, mentioned above, with friends. One of our best funny stories originated in that meal. It's too complicated to repeat here. Ask us.