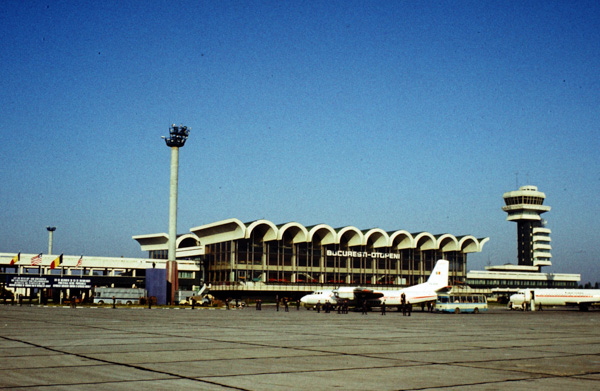 Our entry to Romania was via the Otopeni International Airport. It has since been expanded, modernized and renamed. At the time of my visit, however, it had been recently remodeled.

The design was cutting edge at the time, but looks quaint now. 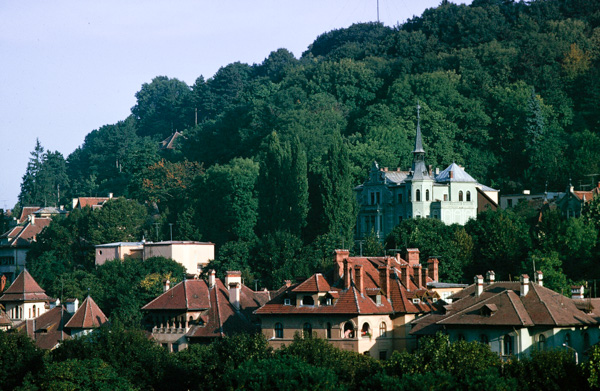 Our first destination was Brasov, the largest city in Transylvania. Our hotel was right downtown. The note on the slide says that this was the view from our hotel. It was a very beautiful city.

There were streets in most towns named after the infamous Vlad Tepes or Vlad Dracul, a Romanian national hero who inspired the name Dracula. Although he was sufficiently bloodthirsty, no one ever accused him of being a bloodsucker in real life.

There's a lot of trash out there on this prince, but the link above has a discussion that largely reinforces what we were told on the trip. 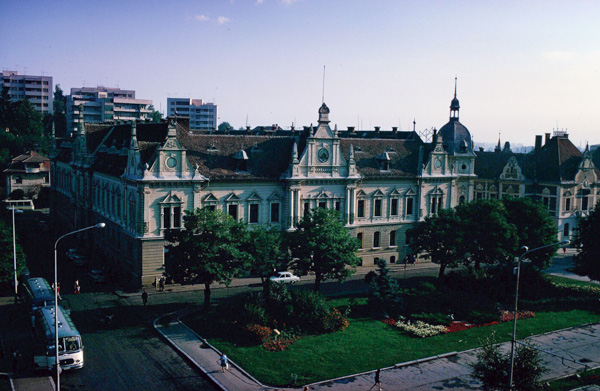 This small park was across the street from the hotel.

I remember that the Baroque building on the other side of the park was some kind of government facility, but my slide doesn't say what. Searching the WWW leads me to think it may be the old central post office.

The hotel was the official "InTourist" hotel. I don't know if the rooms were bugged, but I do know that they were rifled while we were out during the day. 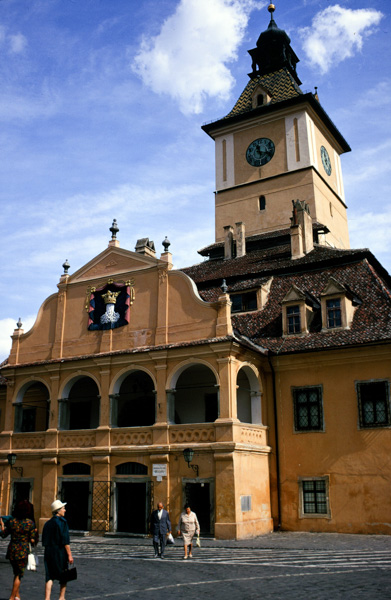 My note on the slide says that this is the Brasov town hall.

The symbol in the pediment is a crown over roots – the official coat of arms of the city. It comes from the German name of Brasov: Kronstadt. At one time the area was ruled and largely populated by ethnic Germans and at the time we visited I was able to get around quite well with my school-girl German. There were a number of people who were native German-speakers, although apparently this has changed in the intervening years.

The national language of Romania is a Romance language descended largely from Latin, with many additional sources.

My slide note helpfully identifies this as "Church #1." A WWW search shows that it is the Orthodox St. Nicholas Church. The link has pictures of the church interior.

Nowadays when I come home from a trip I can immediately use the WWW to find out the details of what we visited. Back then, unless I took notes at the time  there was no convenient way to research faraway places.

I didn't take notes back in those days which led to some very cryptic entries on the slides. I had obviously forgotten the name of this church and the one shown later that had been labeled "Church #2." 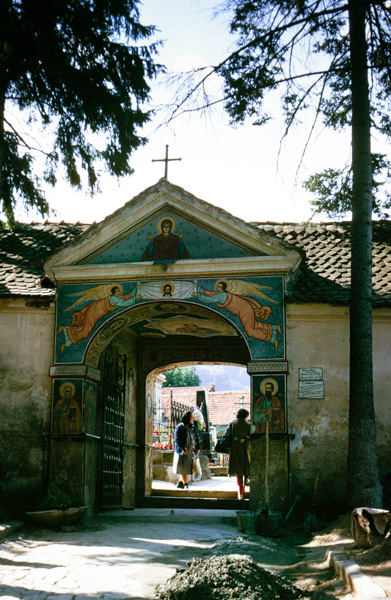 The entrance to the St. Nicholas cemetery. This is the final resting place of many of Romania's notable figures.

We were to see elaborate frescos such as these on the gate many times in our touring.

Since there is space here, it's a good place to describe our guides. We had a "country guide" who stayed with us the entire time. He was a gregarious and handsome young man who spoke excellent English and dressed in the latest western styles. I figured at the time that he was sure to escape the Communist yoke at the earliest opportunity even though he resolutely toed the party line.

We also had a city guide, I don't recall if he was in Brasov or Bucharest, who was completely disaffected – to the extent that I figured he must be a KGB plant. I found it hard to believe that someone as negative about Communism would be allowed to escort Americans around the country otherwise. 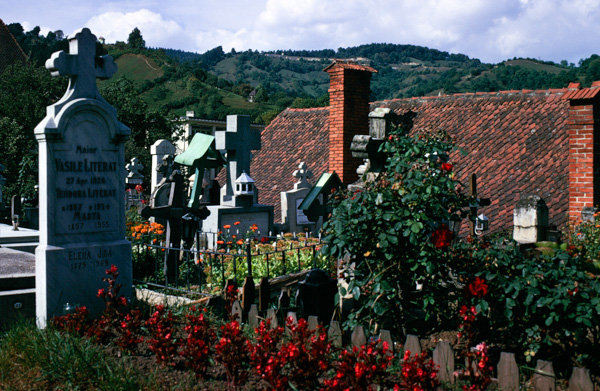 I don't think this grave is of anyone famous, but at least one of the people mentioned on the headstone lived to 98.

I love cemeteries and this was a beautiful one. 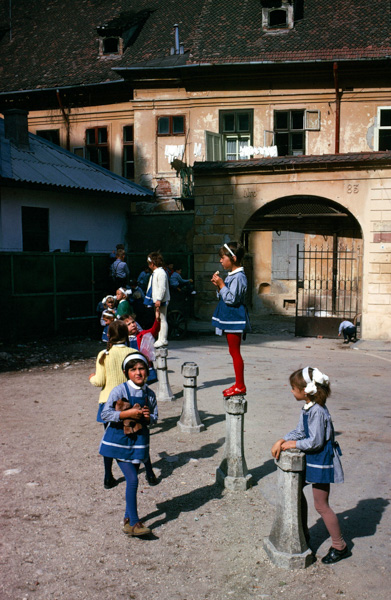 Since we have begun traveling more in recent years I've become familiar with the obligatory school visit to observe happy children. This seems to be most prevalent in current or former Communist countries such as China and Uzbekistan.

These youngsters certainly did appear healthy and happy. They were enjoying their recess period.

I shudder to think what would happen in a modern US school if a little girl, like this one in red tights, had the boldness to perch on the top of a bollard. A lawsuit in the making! 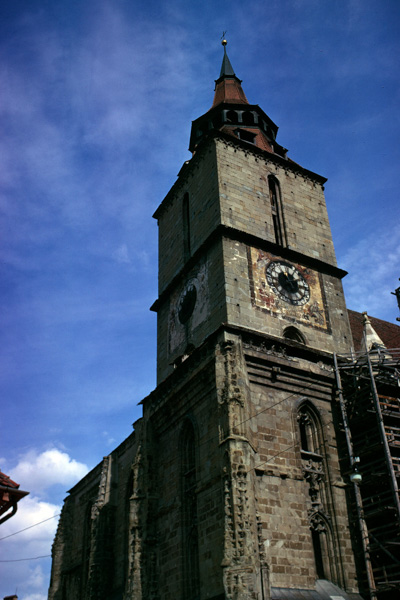 "Church #2," is known as the Black Church. Although originally Roman Catholic, it is now Lutheran.

It was first built in the 14th century, but was extensively restored and rebuilt after a 17th century fire that blackened the stone leading to its current name. 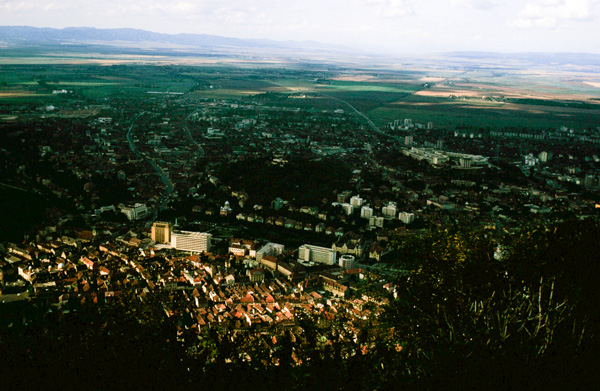 At the edge of downtown Brasov is a precipitous ascent up Mount Tampa. Janice and I rode the cable car up on one of our free afternoons. Some local students identified us as Americans and were eager to escort us around and practice their English. They all wanted to leave Romania and asked us how we could help them get out. I didn't know whether to feel sorry for them, which would have been appropriate, or wary. I recall being pretty paranoid during a lot of this trip.