After a time on Maui, it was off to the Big Island of Hawaii. We flew into Kona and rented a car for the drive to Hilo. 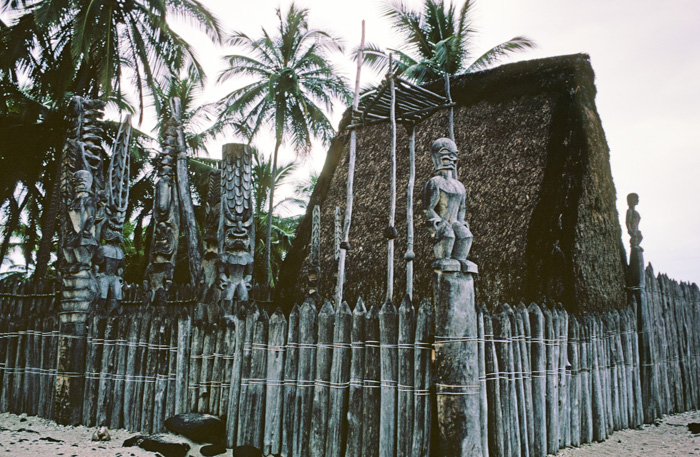 The first stop of interest was the City of Refuge, or the Pu'uhonua o Hanaunau National Historical Park south of Kona. Individuals who broke the law of kapu could flee here for safety. It was also a refuge in time of war.

Farther down the coast is the southern-most point in the US. This was the source of another spirited discussion between me and Fred. It was a 12-mile drive off the main road to get here and then we had to retrace our path to continue our journey. Fred, who insisted on visiting this place, was even more stubborn than I, so we "compromised" again and made the drive. I'm afraid I was a poor sport about it and snarled most of the way down and back.

The "Southern-most Point" in Key West is more interesting. 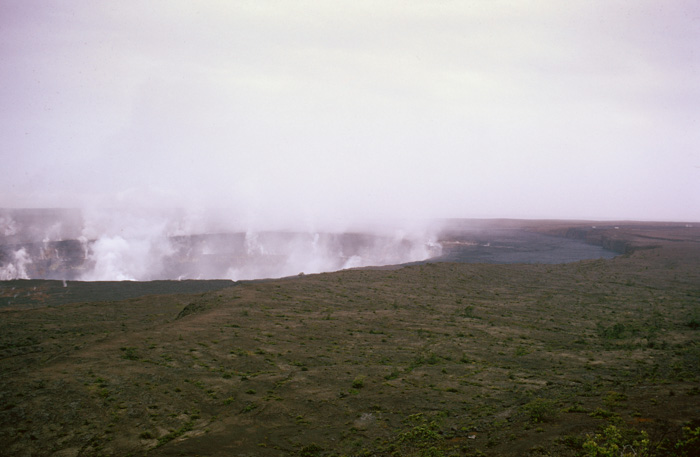 This is what I had come to the Big Island to see: Hawaii Volcanoes National Park. The note on my slide says this is the Halema'uma'u vent of Kilauea volcano. The volcano has erupted several times since. The overlook is now closed.

There is a USGS webcam view of the crater. I had no way to know that within a couple of years of this trip I would be working for USGS. 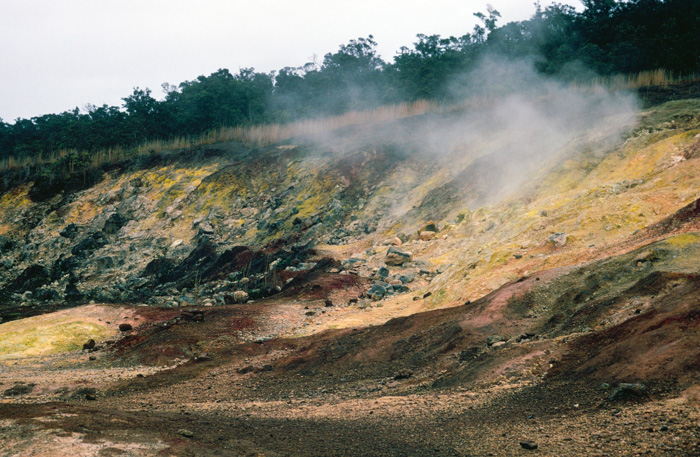 Another place we visited was the sulphur banks.

Jim and I saw similar sights in New Zealand. 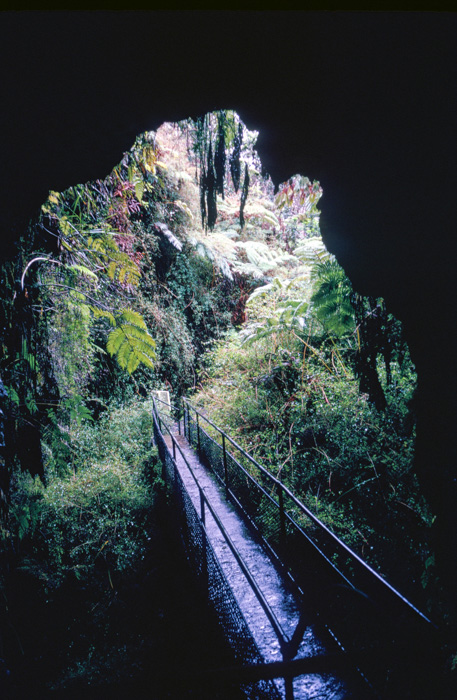 Lava tubes are formed when a molten flow cools on the outside, but the center continues to flow. This particular tube was named for a newspaper publisher, Lorrin Thurston, who discovered it in 1913. It is also called Nahuku.

As we walked along the trails along the edge of this crater, the ground was hot enough from the ongoing volcanic activity that I didn't dare stand in one place for long. I was afraid my Keds would melt! 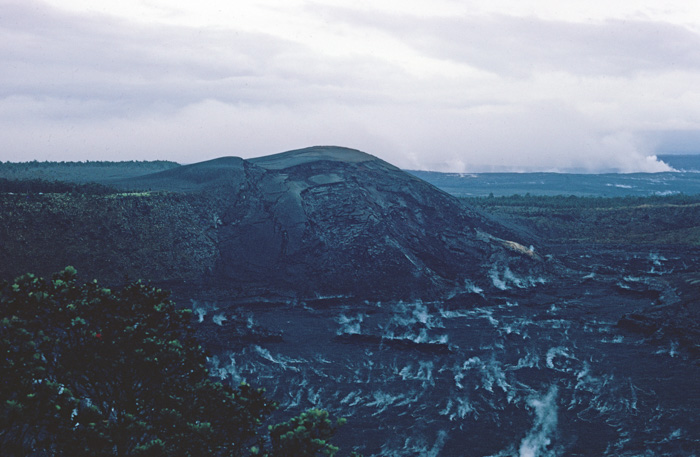 This picture was taken from the Kilauea Iki Overlook.

The picture at the link, which is presumably MUCH more recent than this one, shows a more tranquil scene without the steam.

In addition to the steam, this lava lake glowed from the heat. The pointy peak in the background was one of the main vents of the volcano.

This black sand beach near the former town of Kaimu has since been engulfed by the lava flow from Kilauea's recent eruptions. Check the link to see the new beach forming. 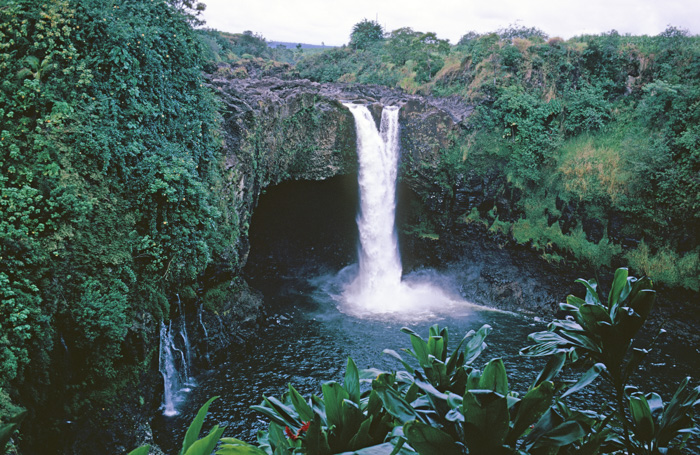 Rainbow Falls is located in the Wailuku River State Park near Hilo. On sunny days there is often a rainbow in the mist from the falls. It was not a sunny day, but the waterfall was striking nevertheless. 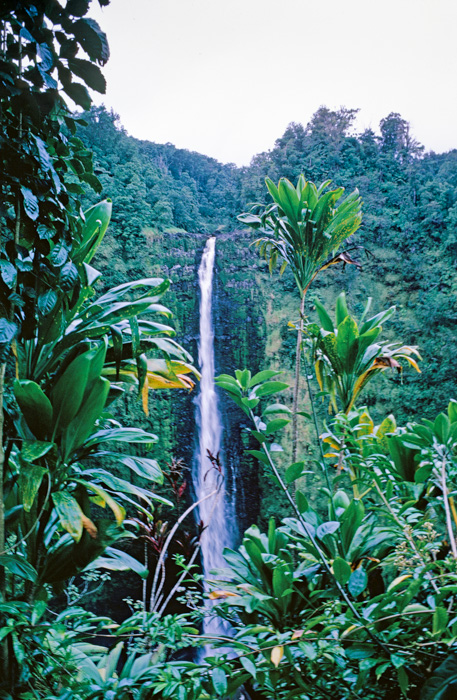 Akaka Falls is located north of Hilo. We drove as far north along the coast as we had time. I was disappointed to turn around as there was much more to see. I may have made some more snarky comments about the "southern-most" excursion.

Many years later one of my colleagues at Tandem Computers relocated to a coffee plantation on the Big Island. No one thought he would make a go of it, but the last I heard of him, he was still there and doing well. 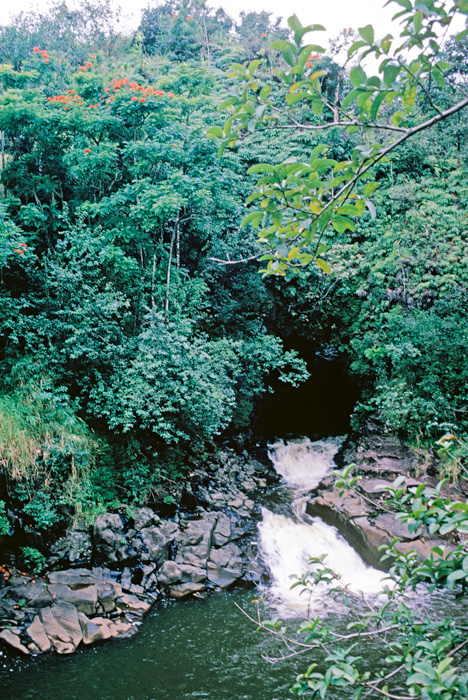 I don't know the name of the little waterfall, but I included this picture for the red-flowering 'Ohi'a Lehua trees. They are said to be very common, but these were the only ones that I remember seeing. 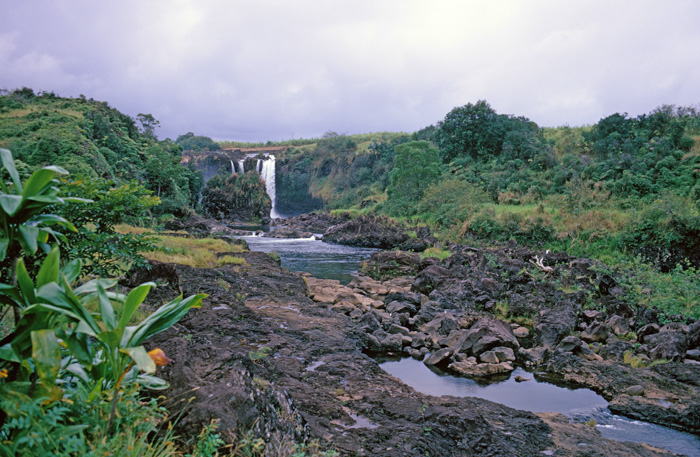 Pe'epe'e Falls is in the background with "boiling pots" in the foreground. When the river is high, the downstream pools seem to boil. They don't look ferocious on this day, but flash floods can change the picture in a moment. 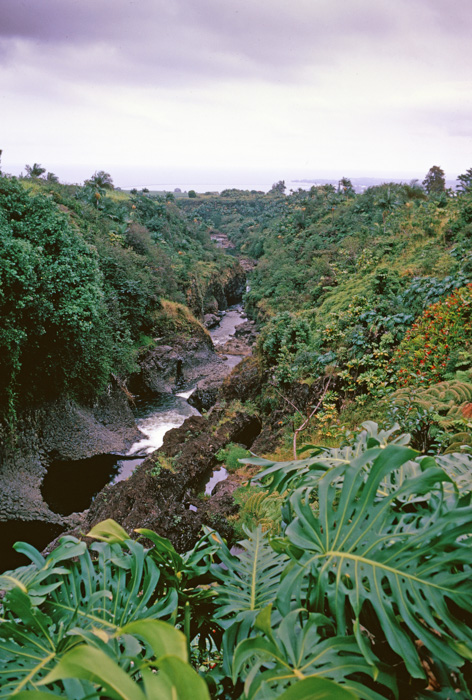 A downstream look at the not-so-boiling pots. 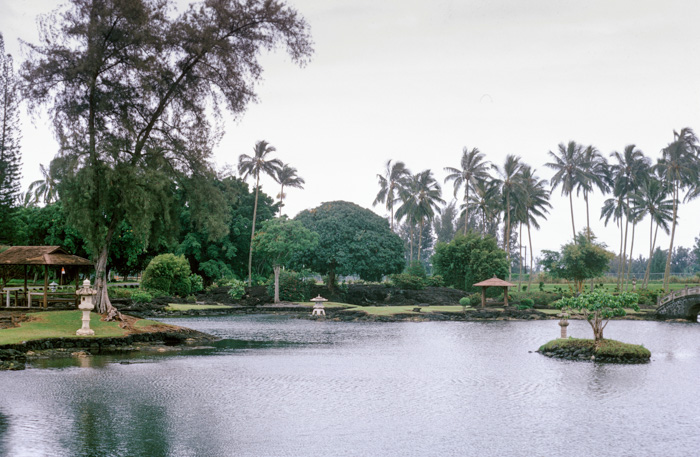 The last thing we visited on Hawaii was the Liliuokalani Gardens in Hilo.

Fred was returning to Honolulu for more work, but I flew back to the mainland from Hilo. It wasn't long, however, before I was back with a new team of colleagues.