In 1972 I was working for the U.S. Army Computer Systems Command (USACSC) as a civilian trainee computer programmer. I had completed my six month classroom training and was now in the 18 month "OJT" portion of the training. The system I was assigned to was called "VTAADS" for Vertical Army Authorization Documents System. I forget whether the "T" was a second component of VerTical or if it stood for Tactical (searching on the WWW indicates the T should stand for "The," but that doesn't make sense to me). It was a long time ago. In general the intent behind the system was to document requests and approvals to ensure that Army units got the personnel and materiel that they needed.

The parts of the system assigned to me were COBOL programs that took the initial inputs, on punched cards in that day and age, and analyzed them for consistency and proper formats. My programs rejected bad inputs with messages and forwarded good inputs to downstream programs for action. What all this means is that I was the one person who best understood the data coming into the system.

As the Army prepared to roll-out the system to bases world-wide, someone needed to examine the various manual systems in use at the target sites, decide what pieces went where, and then write the specifications for programs that would be written locally to create the proper data inputs for the new system. That someone would be me, at least initially. What a plum assignment! I enjoyed several nice boondoggles, er, hard-working business trips, before moving on to other things. The first such trip was to the Panama Canal Zone. In those days the Canal Zone was not, repeat, NOT, part of Panama. It was part of the USA.

There are a couple of ways to follow me on this trip. I've tried to make the narrative a complete summary, but I've used links to other web sites to provide additional details and sometimes pictures. You can either stick with the basic narrative or explore the various links. At the time this album was created the links were all valid, but the WWW is in constant flux and that can change. If you encounter broken links, please send me some email. 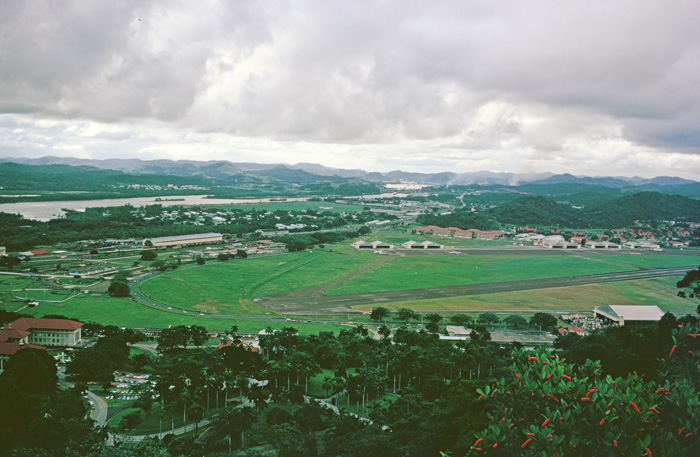 I travelled with Major Al Fische, who would give official credibility to this VERY junior programmer.

I gave poor Al fits when we were arranging the flights to Panama City. My airline preferences were, perhaps, unusual. I wouldn't fly Braniff because they made their cabin attendants wear stupid, albeit designer, uniforms. I wouldn't fly National Airlines, another then-popular airline, that named its planes after women and then had an advertising slogan on the lines of "I'm Betty, fly me to Florida."  Hrumpf! I think we eventually traveled on Pan-Am. At any rate, we got there and back. (None of these airlines are still extant.)

We were met at the airport by Al's friend Lt. Col. Charlie O'Connell. We would be staying with him and his wife while in the Canal Zone. 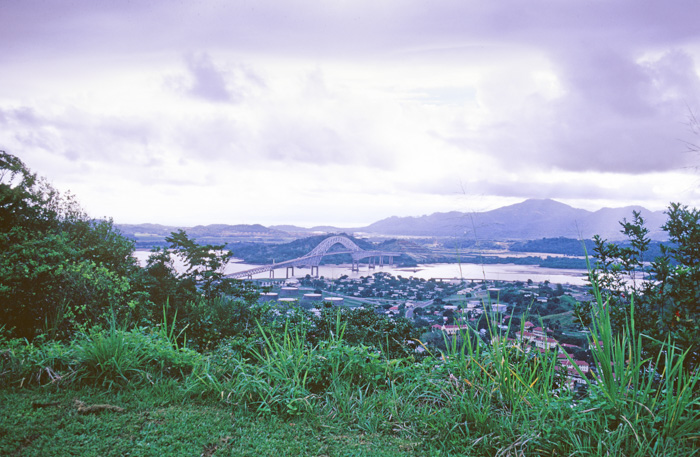 We really did work hard while there. I met with the techies and advised them on the system requirements. Al met with the Pooh-bahs and explained that the Army needed to standardize the systems. That meant they could no longer continue their home-grown systems that had worked for years. I expect I had the easier of those two jobs.

On a couple of days after work, we had time to tour parts of the Canal Zone. One entire day we took off on a fishing trip while the local folks organized their data for subsequent approval.

The Bridge of the Americas carried the Pan-American Highway over the canal. 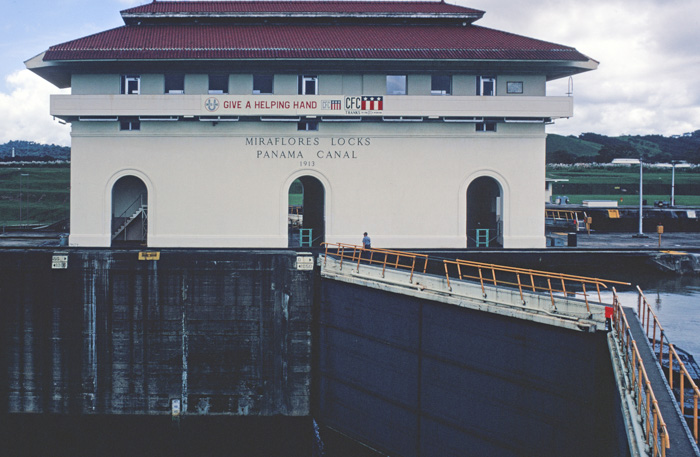 There are a pair of locks at Miraflores on the Pacific end of the canal. We were told that the lock doors, seen here, could be operated manually by a single man if needed in an emergency. At most times, of course, they are automated.

Wikipedia has a good description of the operation of the canal locks.

Even though the locks were huge at the time they were constructed in 1914, by the time I visited they were too small. There had been plans for expansion since the 1930s, but it wasn't until 2007 that an expansion project was finally begun. The new locks entered service in 2016. 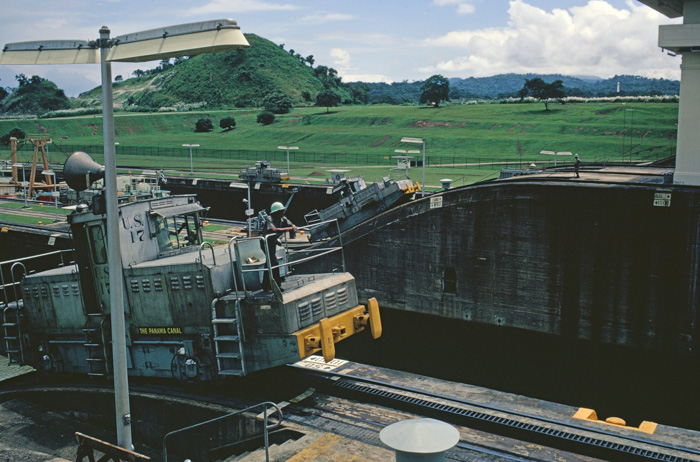 Electric locomotives, called "mules" in honor of hard-working canal livestock of the past, pull ships through the locks. 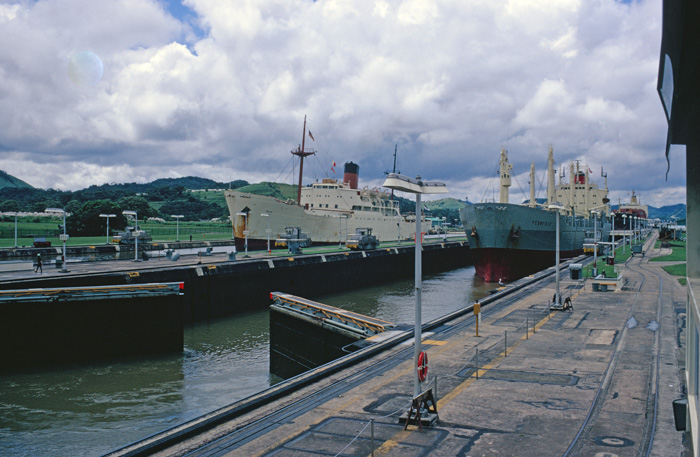 Ships in transit through the locks. The lock doors will only open when the water levels are equal. 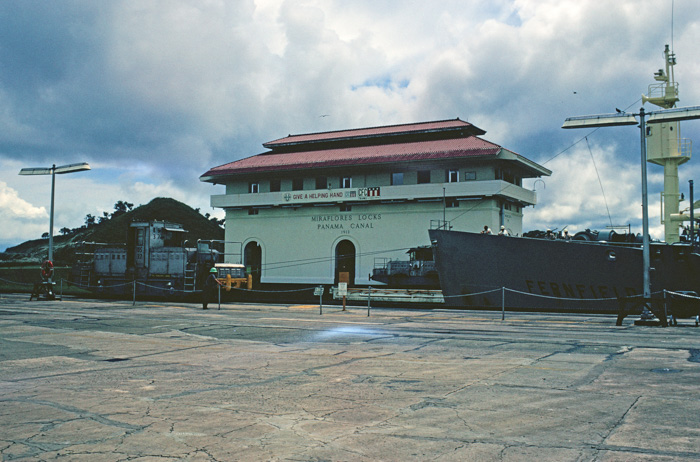 The mule is pulling the grey ship through the locks. 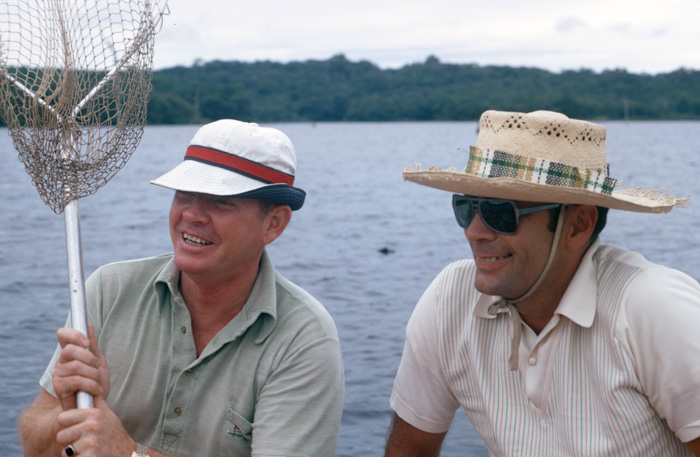 One day we went fishing on Lake Gatun, which forms a major part of the canal. It is wide enough that there is plenty of room for pleasure craft alongside the global shipping lanes.

Charlie O'Connell (R) was our host and Dixie Tompkins (L) was his friend and one of the computer folks that I had been working with. I don't recall if the boat was Dixie's or if they shared ownership. 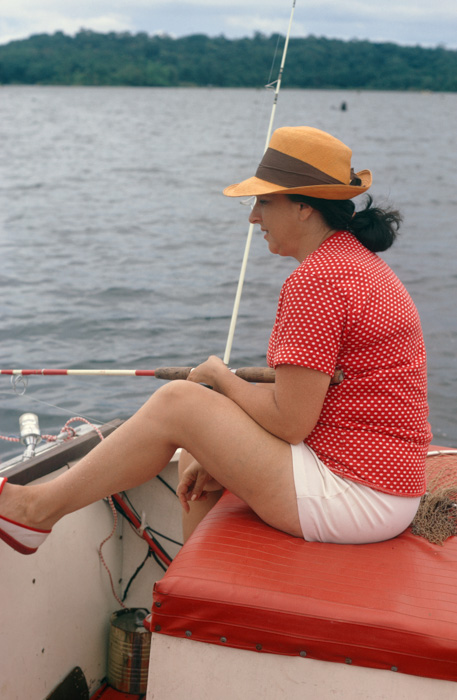 I enjoyed my short stay in Panama. Residences were built up on stilts with a garage and patio below the house. Every afternoon it rained and after work we gathered on the patio for a drink. Howler monkeys are common in the area and their distinctive calls added to the tropical flavor.

Years afterward at a different job I had a colleague who spent his childhood in the Canal Zone. We agreed that in principal colonialism stinks, but in practice it was pretty fine -- for the colonial authorities.

It was in Panama that I had my first experience with Mongolian Barbeque. It wasn't until many years later that I found it again. When Jim and I lived in Mountain View, CA, we used to frequent Colonel Lee's Mongolian BBQ (alas, now closed). In addition to the BBQ it had a soft-serve-it-yourself ice cream machine for dessert. Yum yum!

I also made my first (and last) acquaintance with the concoction called a Harvey Wallbanger while on this fishing trip. Yikes! 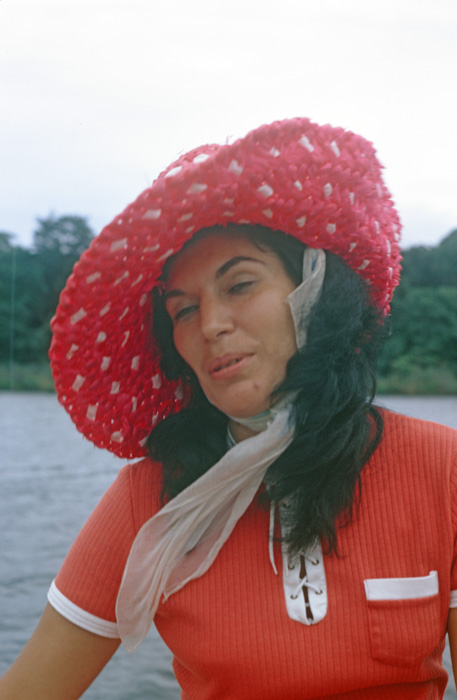 Charlie's wife Chique. She was a very gracious hostess.

These were all very nice folks and we had a fun time together.

One of the exciting things about fishing in Lake Gatun was the necessity of watching for submerged tree stumps! The lake is artificial and the forests that were flooded when it was created in the early 20th century were simply left. Rising water drowned the trees and their tops rotted away, but water preserved the stumps, which could be seen just below the water line. They were still tall enough to cause damage to the boat or its motor if we weren't careful.

The stumps made for good fishing grounds, though, so we threaded our way through them looking for a good catch. 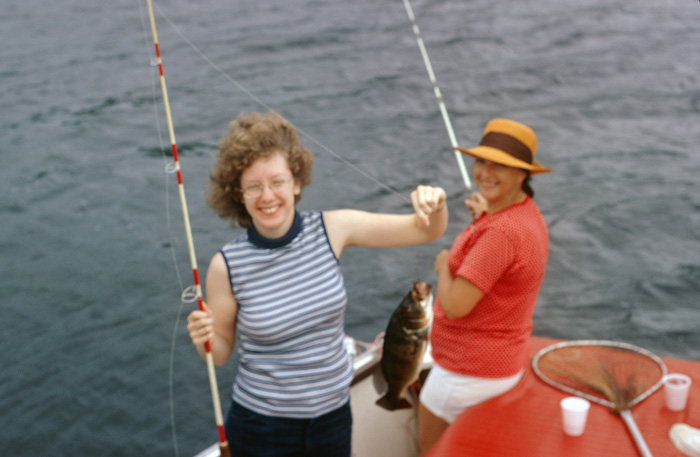 As it happened, I was the only lucky fisher that day! I don't remember if we kept the fish for supper or not. It's a big 'un, but it wouldn't feed six people. 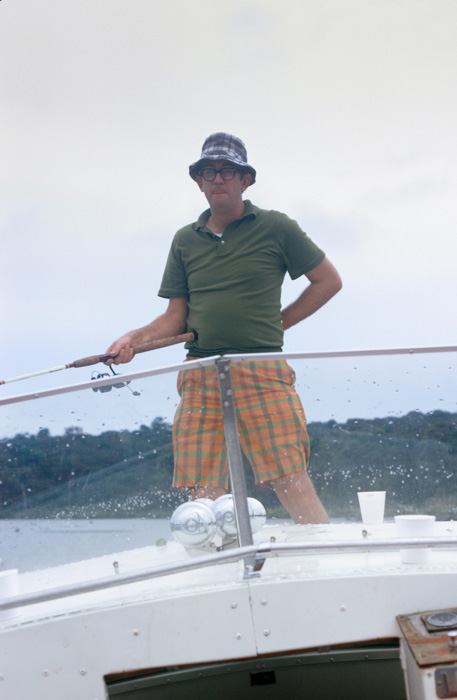 My colleague Al looks pretty glum at his lack of fishing luck.

Al, who was "Reserve Army," and Charlie, who was "Regular Army," had spirited discussions over the merits of the distinction, which seems to have been abolished in the years since. At the time a Reserve officer (not to be confused with Army Reserves, which is a different kettle of fish altogether) was restricted as to length of service (20 years) and maximum rank (Lt. Col.).

In later years while working as a civilian contractor for the Air Force Data Services Center, I learned that the process was different in that service. At that time, at least, an individual officer might have two different ranks: one in the "regular" Air Force and another, typically higher, in the "reserve" Air Force.

Our fishing trip had an unexpected ending. The boat's engine died leaving us stranded. We only had one paddle, which wasn't going to get us very far. Luckily we flagged down another fishing boat and the folks agreed to tow us back to the marina!

It was a great experience and a grand trip. I had lots of fabulous business trips, and this first one set the pattern.

Oh, and the transition to the new system went smoothly.