After our stop in Querétaro, we reached our major destination of Mexico City where we spent a few days. 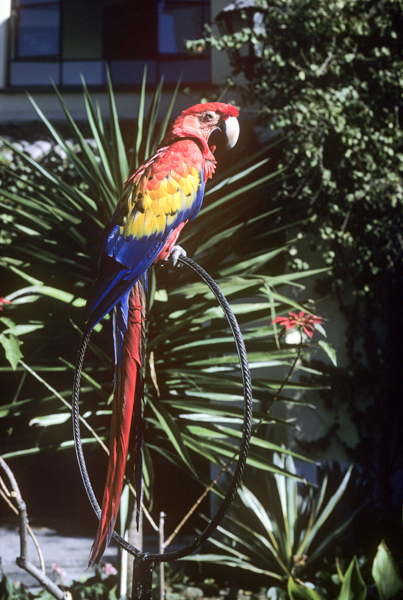 This scarlet macaw was the mascot of the motel where we stayed. Dave's notes identify it as the Park Villa Motel. I don't know if the macaw is still living, although it could be.

There are always stories of "Montezuma's Revenge" besetting travelers in Mexico. Our Mexican friends at school assured us that Mexicans visiting Mississippi had a similar problem. It's due to unfamiliar microbes found in water and on produce.

In any event, we had been wary eaters and drinkers and by the time we reached Mexico City none of us had experienced any ill effects. I wasn't feeling especially perky after the long trip, and elected to stay at the motel while the others went out to eat. They became victims of irrational exuberance while visiting the only up-scale restaurant of the trip. They ate (gasp!) salad. As a result they all came down with a nasty bug that I escaped altogether. (Although sharing a motel room with three very sick individuals is not to be envied!)

This somewhat cramped our sight-seeing in the city! 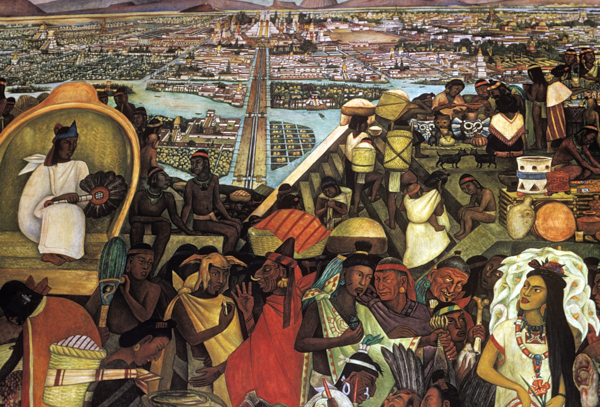 Nevertheless, Dave's notes say that we bought a sight-seeing tour of the city for our first day. We visited the main plaza and the National Palace in order to see the Diego Rivera murals. (The link has more complete images than these along with an explanation of the political message Rivera was illustrating.)

This mural shows the ancient city of Tenochtitlán, the Aztec capital. It was built on a large lake with causeways and floating gardens. The Spanish constructed colonial Mexico City on land reclaimed from this lake. The female figure at the lower right is Frida Kahlo, who often appeared in Rivera's work. 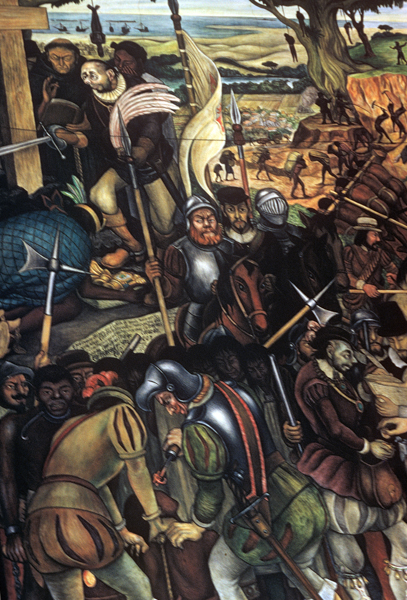 Rivera's agenda was to show the Spanish as less than noble. In this and other images Cortés in particular was shown as deformed – almost cretinous in appearance. According to the description of the murals at the link above: "Bones reputed to be his indicate that he may have been hunchbacked and syphilitic." His bones have had quite an odyssey, but I've not found any indication that they have been analyzed by scientists. His image is in the upper left and lower right of this segment. The conquistadors in the foreground are committing atrocities against the indigenous inhabitants. 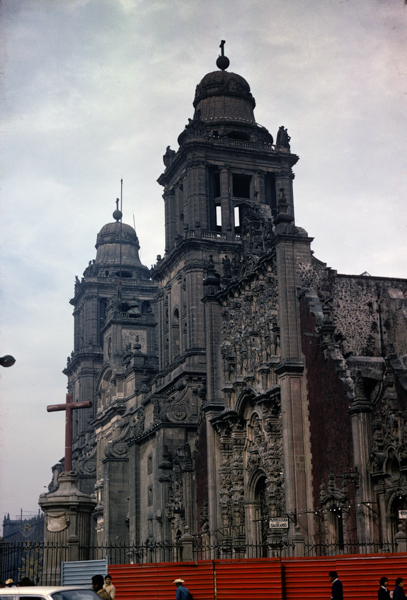 Metropolitan Cathedral faces the same huge square as the National Palace. At the time we visited there was work in progress to prevent the cathedral from sinking into the soft lake bottom shown in the mural above. Since that time the building has been stabilized. The interior of the cathedral was quite elaborate, but none of my pictures came out well. There are interior pictures at the link. 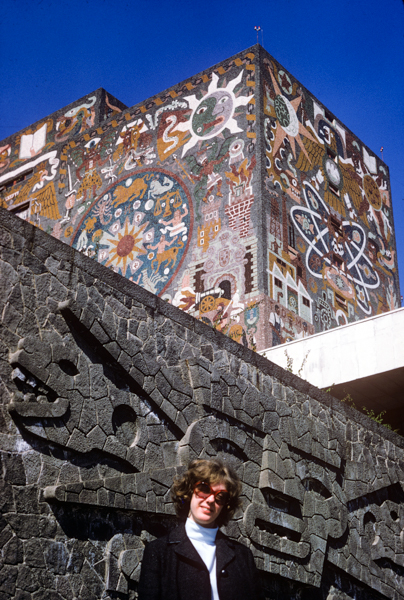 That evening we went out with some local folks that we had met. Over indulgence in street food led to untoward consequencs!

The next morning only Dave and I were ambulatory so the two of us visited the University of Mexico's campus.

Architect Juan O'Gorman designed the main library in 1953. The mosaic murals, constructed from natural stone and glass, are said to be the largest in the world. Breath-taking doesn't begin to describe them. 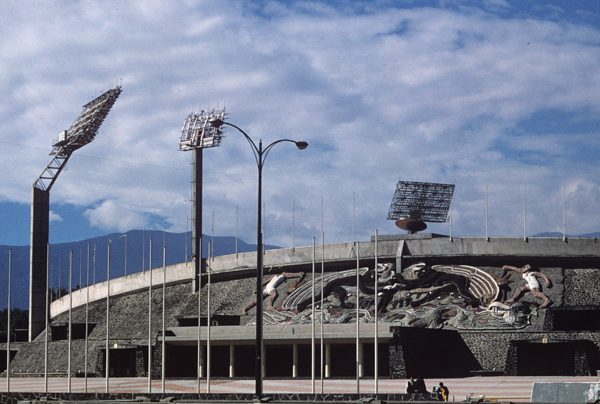 Also located at the university is the stadium from the 1968 Summer Olympics. At the time we visited in 1969, it was still new. Locating the games at such a high altitude was controversial at the time. 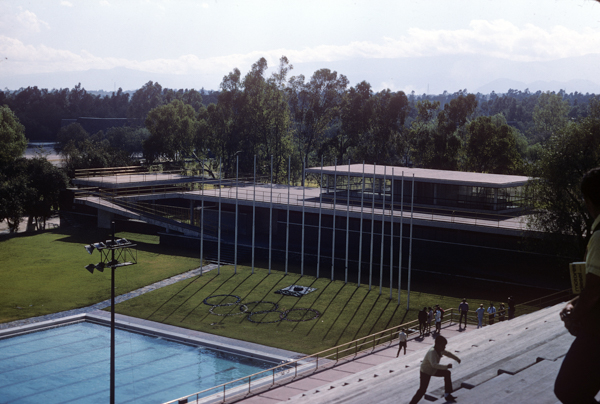 Athletes used the stadium seating for training. The altitude in Mexico City is over 7,000 feet (2,240 metres). It is no mean feat to run up and down these steep steps. I was panting just walking around.

While Dave and I were at the University site, Ginger and Priscilla managed to get out a bit and met a couple of university students downtown. We all went out with them that evening to a mariachi festival. I don't remember much of the experience other than almost getting lost on the subway and the really, really hot dipping sauce for the edibles. Welcome back Montezuma! 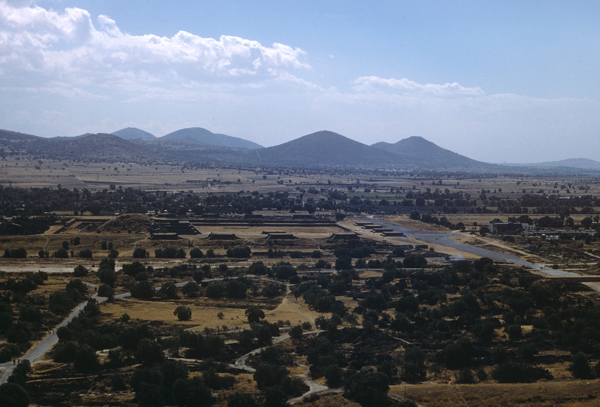 The next day we drove to Teotihuacan. The initial construction of this ancient city was in the first two centuries AD. Much about the culture that built it is still unknown.

This "main street" of the city is called the Avenue of the Dead. This overview is from the Pyramid of the Moon. 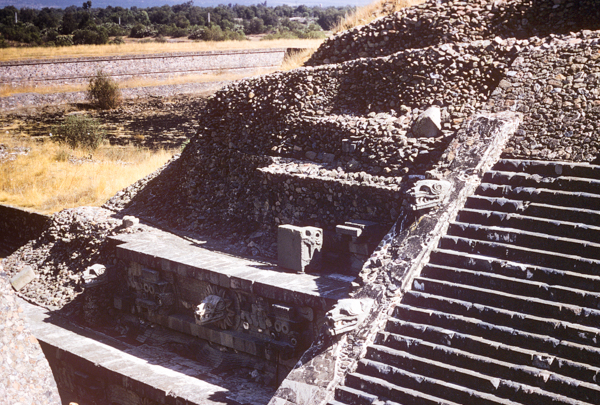 The Feathered Serpent Pyramid is the third largest at the site. It is decorated with the carvings that supply the name. 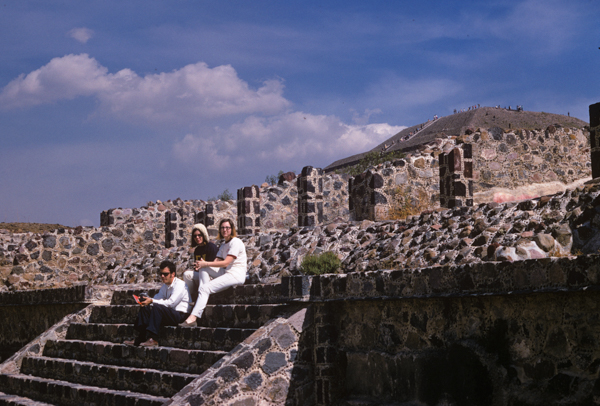 We walked around much of this site, which was enormous. The Pyramid of the Moon, in the background, towers over the city. It is set to the side of the "main street." 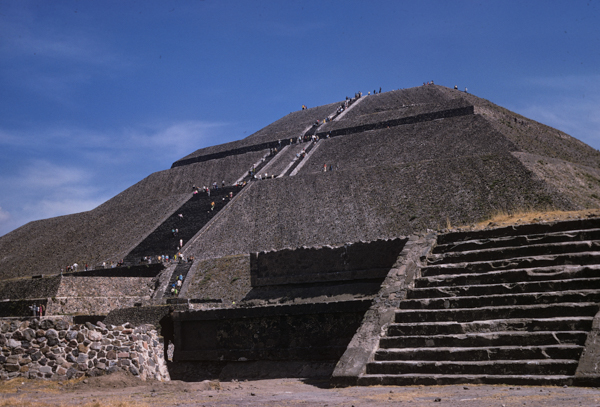 I wasn't able to convince Priscilla and Ginger to climb these heights, but Dave and I made it to the top of the Pyramid of the Moon.

The climb was much steeper and rougher than it appeared at the bottom. 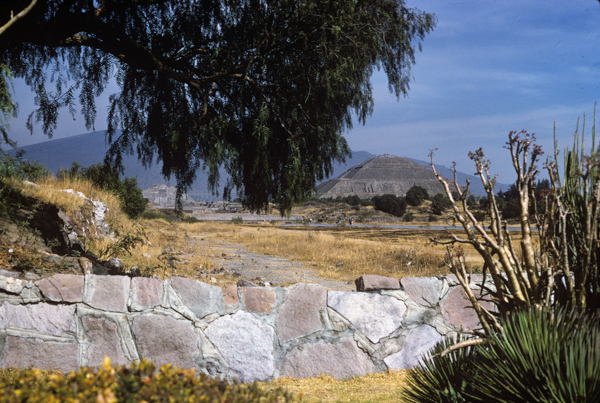 After Teotihuacan we reluctantly headed back north toward home. What a wonderful adventure in our neighbor to the south.

There was still drama to our trip though. Our auto insurance only covered seven days. Those days were coming to an end and we were too far from the border to make it back in time. First we tried to buy an extension in Mexico City, but that effort was unsuccessful – I forget why. After consultation we decided to start for the border and see if we could get some insurance on the way.

We made it some distance north before trying again. This is where we really learned about mañana. We spent much of a Friday morning in an insurance office waiting for the agent who was expected to return momentarily. It turned out he had gone fishing and had no intention of coming in to work before the following Monday.

We decided to make a dash for the border and trust that there would be no mishaps on the way. There weren't. I can vividly recall the tension we all felt when we discovered that we had left our entrance documentation in the insurance office! Luckily we passed the border without incident.

About six months after we returned home my parents received a packet in the mail from Mexico. The insurance office returned the documentation that we had left. Since the car belonged to my parents, their address was included in the documents.

The only other time I've visited Mexico, Jim & I went with a tour.