We gathered at Ginger's house on Christmas Day, 1969. My parent's station wagon, borrowed for the trip, was loaded to the gills. 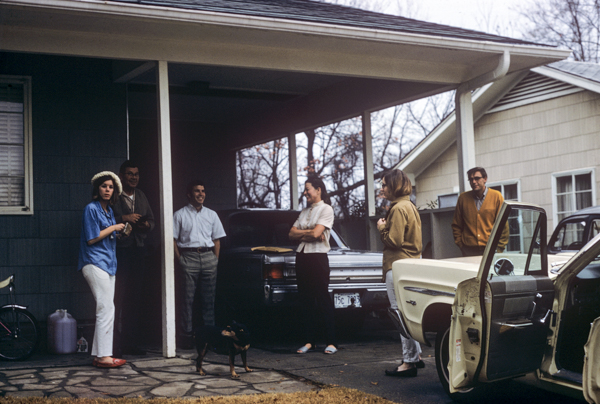 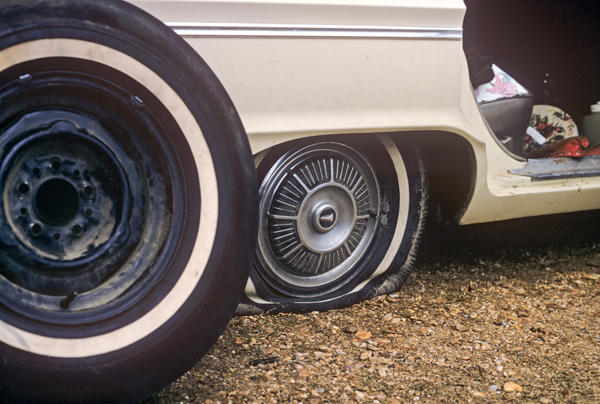 We made it just 10 miles before having a flat tire! 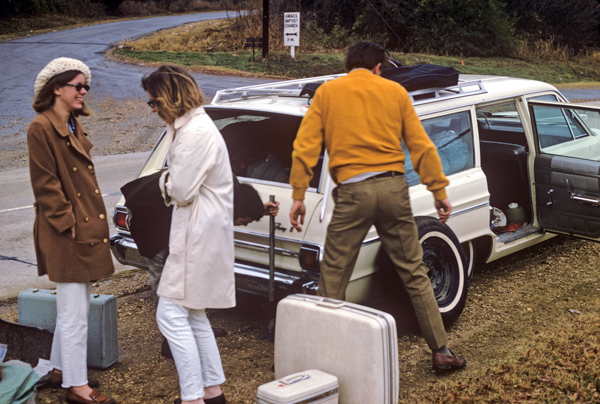 Of course the car had to be completely unloaded before we could get at the spare and the jack. In true Southern form, we gals let the guys change the tire.

We didn't want to travel without having a spare, so the next order of business was getting the flat patched or replaced. Good luck with that on Christmas Day! 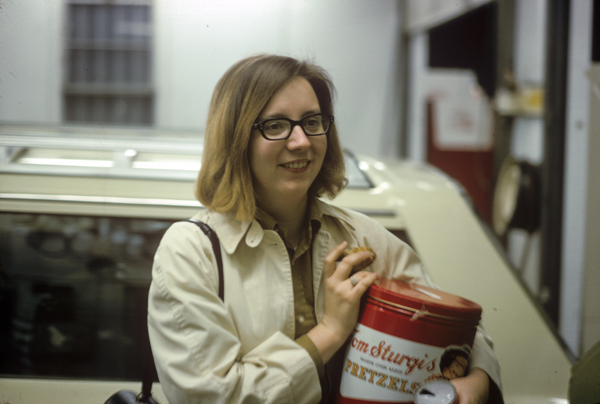 I don't know how many places we stopped to ask about getting the tire fixed. All the shops were either closed or offering reduced services. Eventually we could recite in chorus "but it's Christmas Day!"

Once we got the tire patched the brakes began to act up! We were looking again for a repair show that was open. According to Dave's narrative we eventually located a shop in Victoria, TX, that fixed the brakes. I never did like Plymouths. 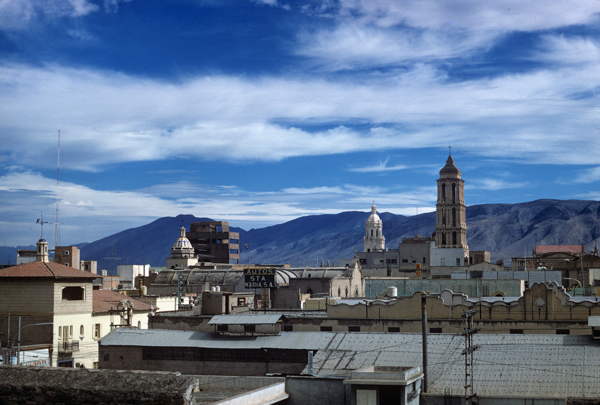 After dropping Frank off in Laredo, TX, we purchased seven days of car insurance for the drive into Mexico and crossed the border.

I believe we spent the first night in Monterrey, but the first place I remember was Saltillo, a beautiful city nestled in the mountains. The farther we went from the border, the lovelier Mexico became.

Our goal was Mexico City down the Pan American Highway. 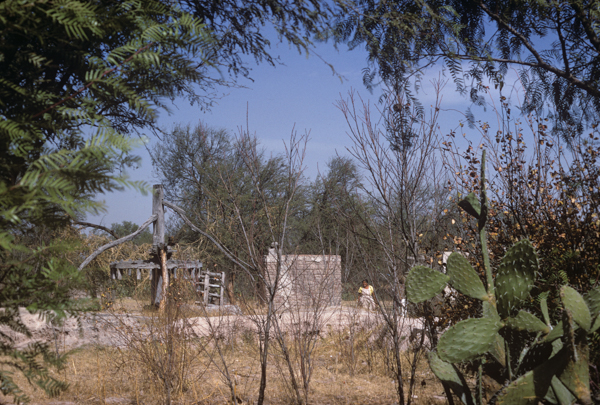 We passed many little farmsteads and villages. We stopped near this little farm to have a picnic lunch. We were fascinated by the wooden water wheel. None of us spoke more than a few words of Spanish, so it wasn't possible to ask too many questions about how it was used or if people worked it or donkeys. Dave's notes say that we gave the people here some cheese from our picnic lunch. 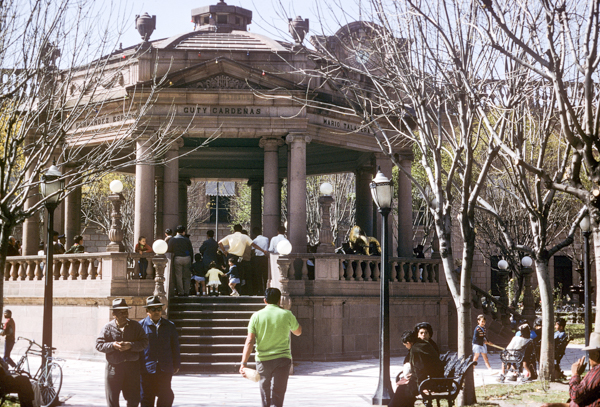 I'm not certain exactly where this little city park was located. My slide says San Luis Potosí, but it is now a huge city. Was it then? Wherever it is, we enjoyed a charming band  and cruised a great street market. 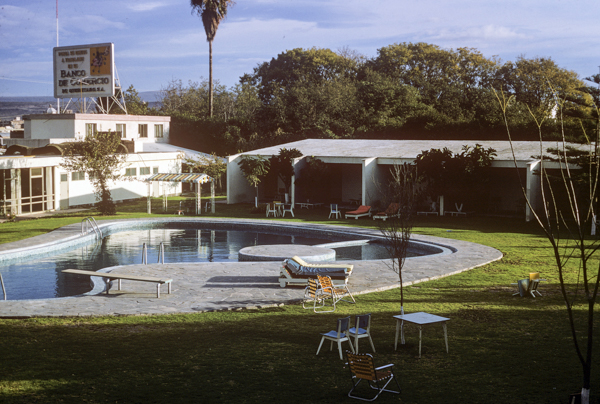 Our next stop was Querétaro, where we stayed two nights. I don't remember why I made a point of taking this picture of our motel except that it was quite comfortable. Nice pool.

Even though it was winter and the altitudes throughout Mexico were quite high, it was not cold. Just cool enough to be pleasant.

Dave made note of a man who followed us around and accosted us women. It was not the last time that such a thing happened. We were lucky to have Dave along as our "protector." 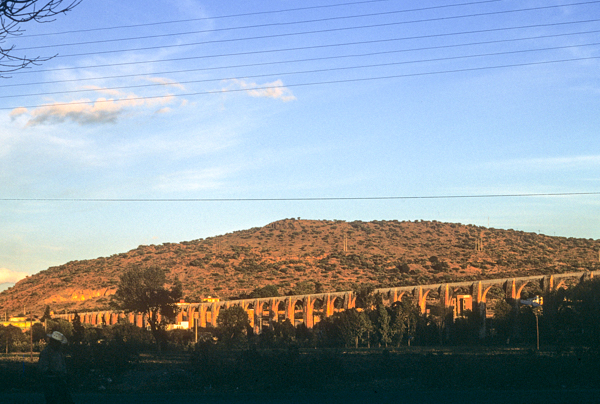 Querétaro is noted for many things. Among them is this 18th century aqueduct. I did get a close-up of it, but by the time we got there it was too dark for a decent picture.

I don't recall anymore why our focus was almost completely on pre-Columbian monuments. Many of the cities we visited have notable Spanish colonial neighborhoods and buildings, but we visited few of them. It probably had a lot to do with time limits – you can only do so much. 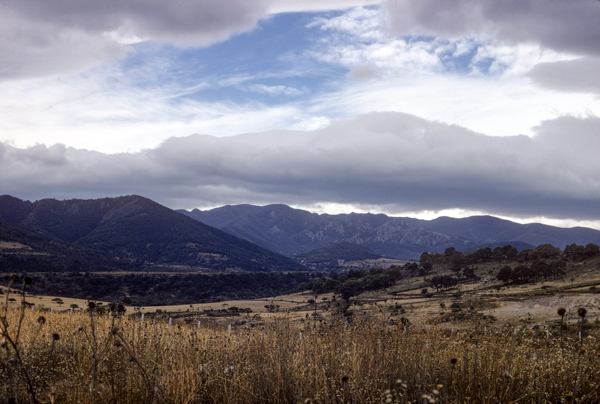 Querétaro was our base for an expedition to the ancient site of Tula. The countryside was lovely. 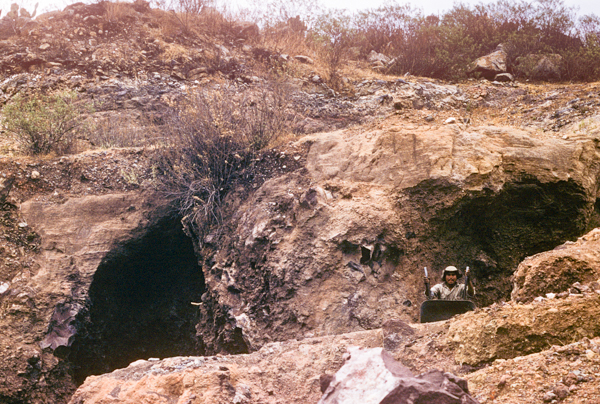 On the way we passed these mines. The area is noted for Mexican opals. I bought a large pink opal for not too much money. (Once we left the border towns, prices were more than reasonable from our American perspective.) After I got home I had it set into a ring, but shortly thereafter I dropped it and the stone shattered. Oh no! I was able to return the setting, which had cost more than the stone. It was many years before I got the nerve to buy another opal. 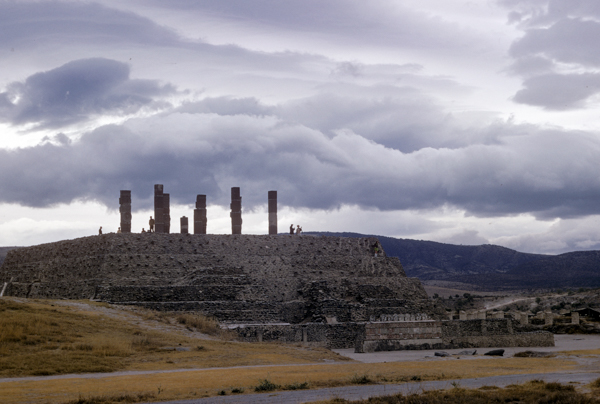 Tula, the ancient capital of the Toltec people, dates from before the 11th century, A.D.

Their primary god was Quetzalcóatl – the plumed serpent. When I was in college one of my roommates, who majored in Spanish, hung a mask of Quetzalcóatl in our dorm room. While here I thought of her. She later became a missionary to South America. 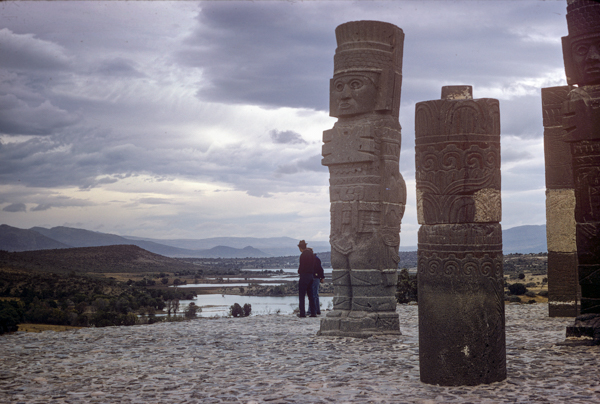 These ancient figures are called "Atlantean," although there is no traditional connection with Atlantis that I'm aware of. They may have once supported a temple structure. There is a lot of more-or-less fanciful stuff out in WWW land about what they might have been or what they might represent. 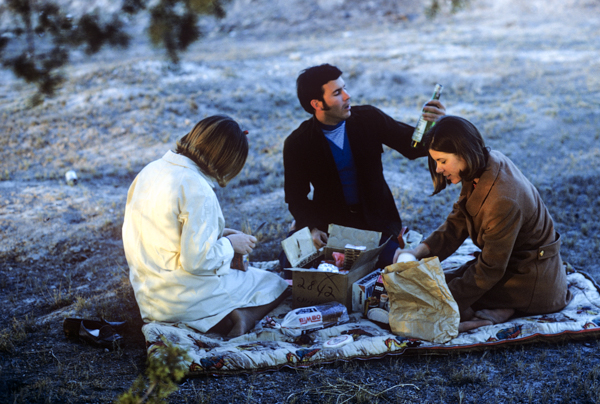 At sunset that evening, we stopped along the road for a picnic supper. 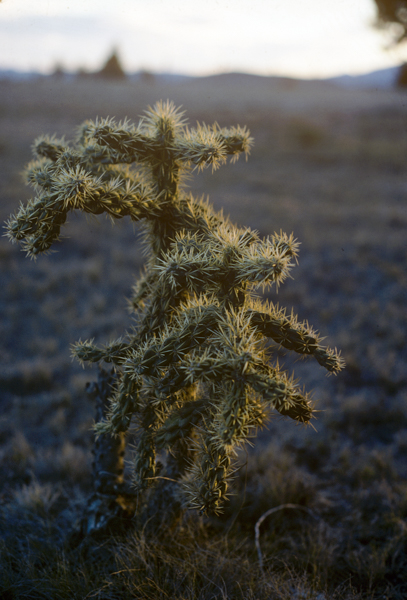 Close by our picnic location was this nasty little cholla. Those spines are lethal. Some varieties, known as "jumping" cholla, can shed segments that latch on to your clothes or quivering flesh.

The original slide has a nicer sunset light. 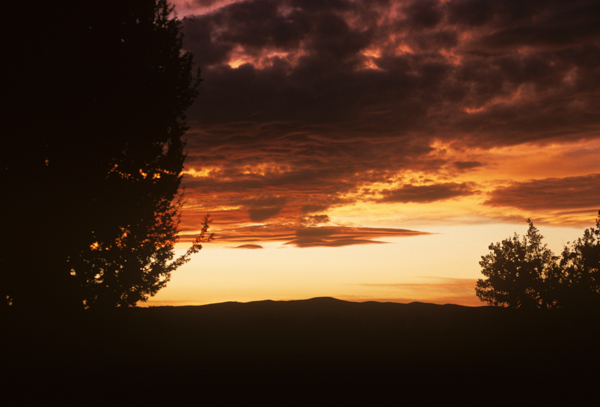 We enjoyed the sunset along with our picnic.

Driving in Mexico was fraught with hazard, but we were young. I don't know that I would brave the Mexican highways after dark now. We frequently saw cars and trucks parked on (not beside!) the highway. Drivers took no notice of oncoming traffic before passing – they just figured that everyone would have the good sense to get out of the way. I know we did!

We heard stories that poor people deliberately step in front of an American car in order to claim injury and collect insurance (or extortion).

Of course this was many years ago and circumstances are undoubtedly different nowadays.