In 1968 the Berlin Wall was a relatively new phenomenon, although the city had been divided since WWII. One of my favorite history research papers had been on the Berlin airlift of 1948-49, so I was eager to see the city for both reasons.

I would have preferred to take the train to Berlin, but either it wasn't allowed at all or visa requirements were prohibitive, so I flew.

After my time there, I flew back to Munich to take the train to London. There I met most of my MBC colleagues for the return flight home.  There were at least a couple of the girls who remained in Germany -- either for work or for additional schooling.

I wasn't able to get a sleeper on the train and it was packed. I scrounged a seat in a compartment with some men who were either Greek or Turkish. They started out a bit fresh with a girl traveling alone, but we eventually reached an understanding. The only other option was standing in the corridor all night, which wasn't appealing either.

The train connected with a ferry at Ostend and then with another train at Dover. I don't know why I didn't take any pictures. I expect my camera was packed for safekeeping. 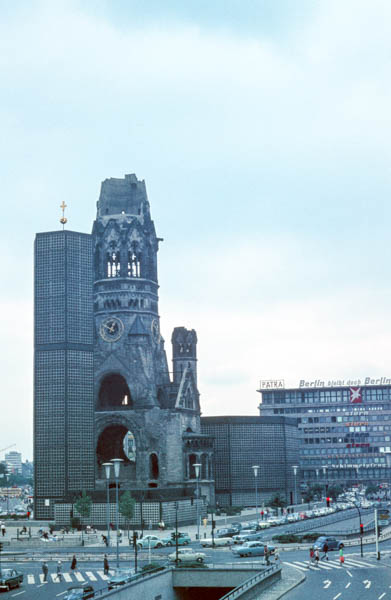 The Gedächtniskirche was built in the late 19th century by Kaiser Wilhelm II, the last German emperor, in honor of his grandfather. The church was destroyed by bombs in WWII, and has been preserved as a memorial against war. 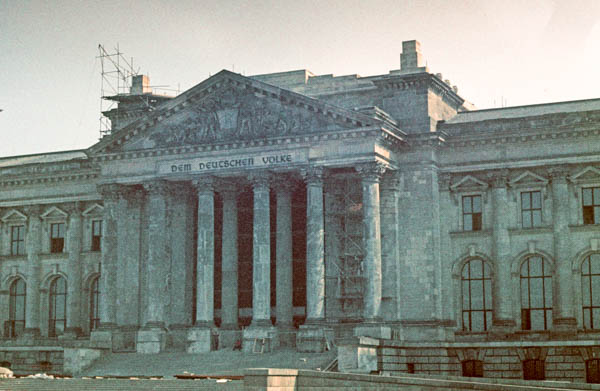 The Reichstag was constructed in the late 19th century to hold the Imperial Diet (Parliament) of the German empire. It was damaged by fire in 1933 and not used again for the parliament until after the reunification of Germany in 1990.

At the time of my visit, it was being stabilized. 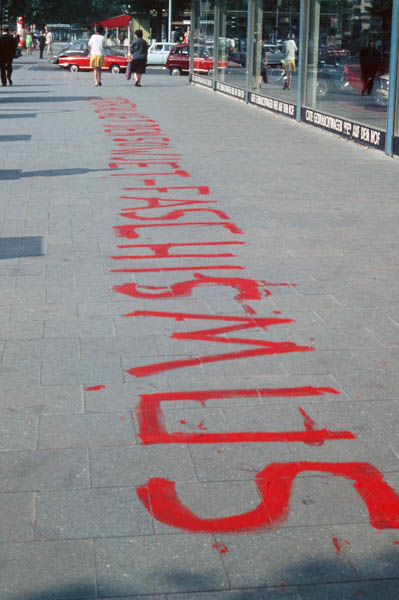 The building of the Berlin Wall and the killing of those who tried to escape rankled. A protestor had painted this message. I can't read the beginning of the message, but equating Communism with fascism was a grave insult. 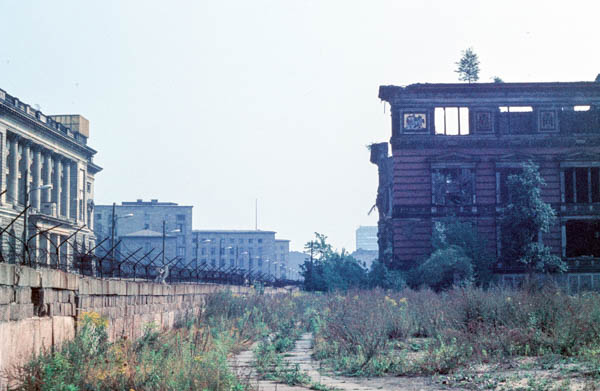 The Allied side of the wall was a zone of devastation, but there was no cleared and patrolled "death zone." I expect anyone could walk right up to it, but who would want to.

The fence looks like it is designed to keep West Berliners out. Ha! 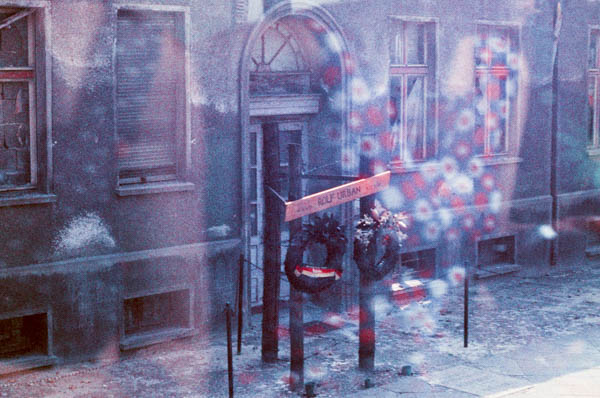 The city was divided along streets. When the wall was built in 1961, existing houses were incorporated into it. The houses were demolished leaving only their bricked-up facades.

This is a memorial to Rolf Urban who made a break for freedom and died in the attempt. (Taken from the tour bus hence the reflections.) 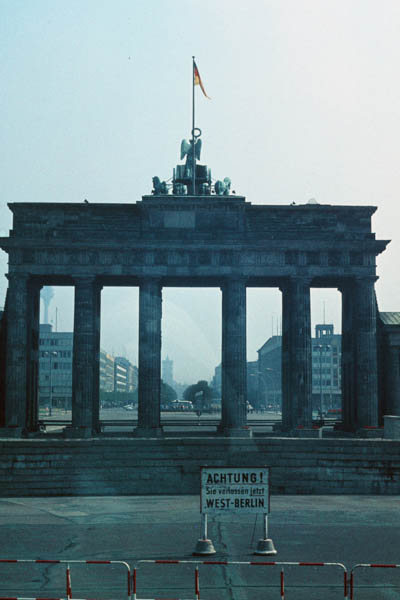 The Brandenburg Gate was part of the 18th century "customs wall" surrounding the city. The east/west divide ran through the gate, which was isolated at the time that I visited.

This picture is looking toward East Berlin and the avenue Unter den Linden, which once was the monumental entry to the palace of the Prussian kings. 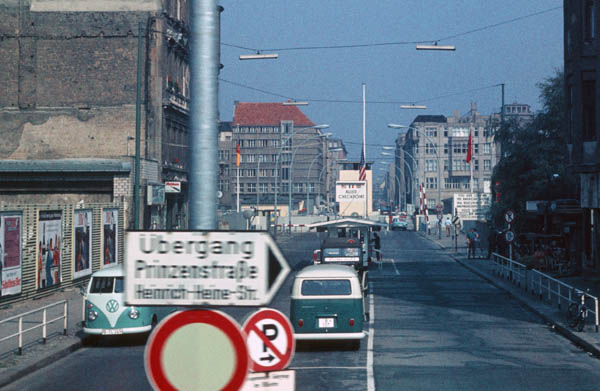 I signed up for a tour of East Berlin. We were sternly forbidden to take pictures of Checkpoint Charlie so of course I did.

It was the primary entry point for tourists and others. 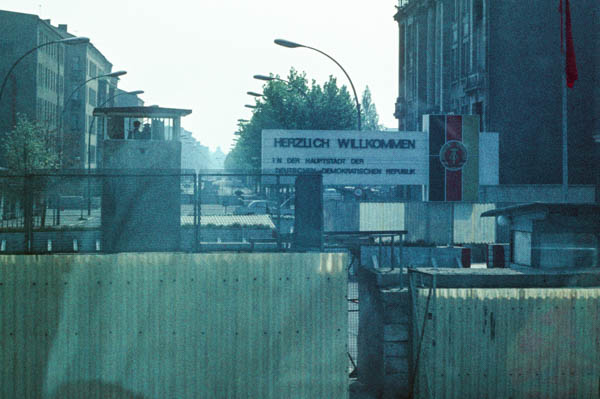 The sign says "Hearty welcome to the capital of the German Democratic Republic." It looks welcoming doesn't it?

It was chilling to see how the bus was checked out when we left -- mirrors were run underneath to make sure there were no stowaways. 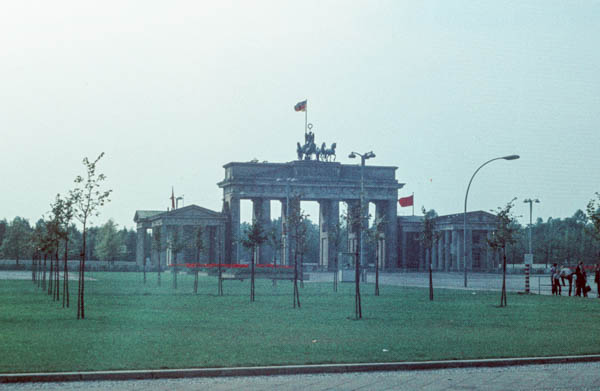 This is the Brandenburg gate on the eastern side. It was designed to be entered this way. 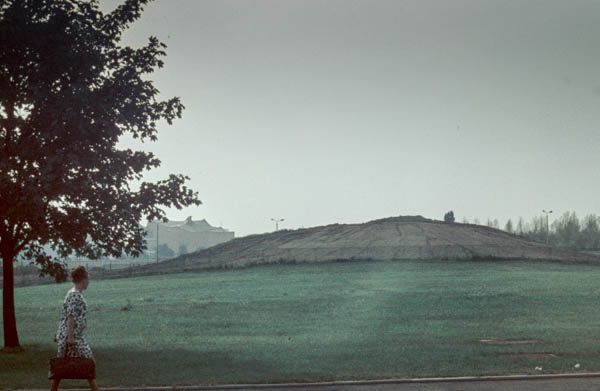 We drove by the site of the bunker where Hitler committed suicide in the closing days of WWII. The buildings were destroyed by the Soviets. Later the location became a parking lot for newly constructed buildings. 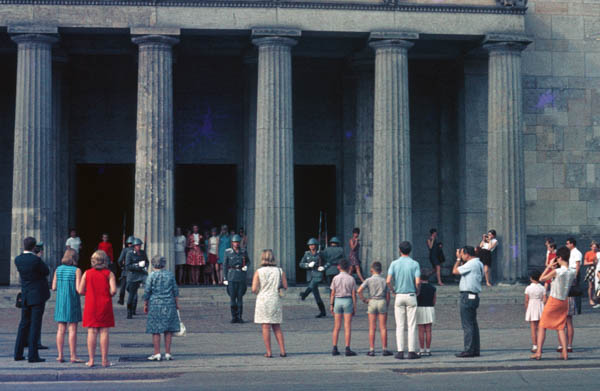 The changing of the guard at the East German Tomb of the Unknown Soldier. There's an discussion of the history of this monument , which has been known by several names,]at the link. The goosestep is still popular. 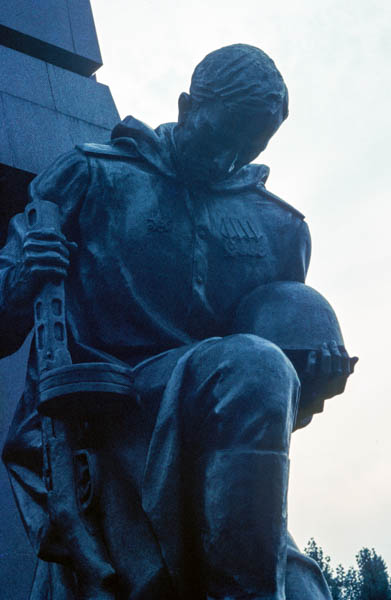 We also visited the Soviet war memorial and cemetery.

The entrance is constructed of stone taken from Hitler's chancery after it was demolished.

The highlight of the tour of East Berlin, however, was the Pergamon Museum.

The exhibits were impressive, but the memorable moment came as we were leaving. Two young women failed to return by the appointed time and our guide, the archetype of the East German bully, directed the driver to leave them -- even though they came running as we drove away and the rest of us were screaming to her to stop. I wonder how they got back to West Berlin. 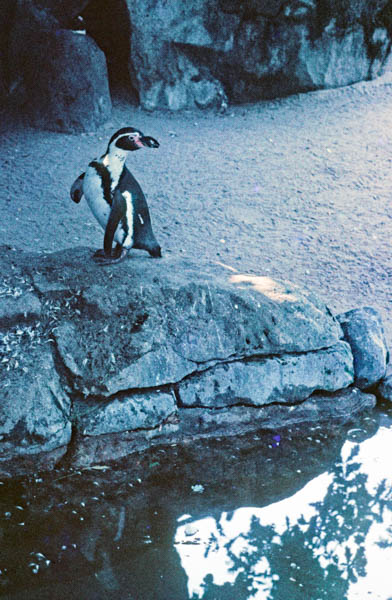 I don't recall why I took half a day to visit the Berlin zoo. I'm not especially fond of zoos.

I took a bunch of pictures, but I'll let this little penguin stand in for the rest of the critters. 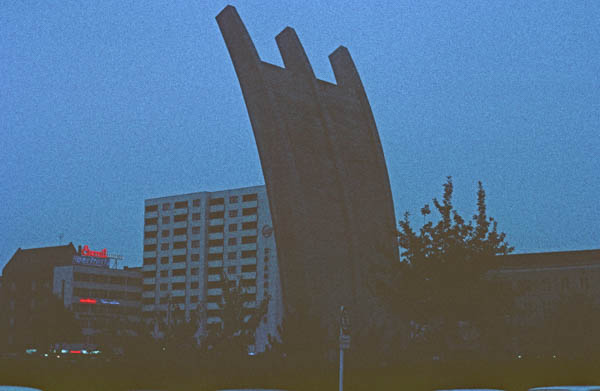 The Berlin Airlift Memorial was located at the old Templehof Airport. It contains the names of pilots who died during the time of the airlift.

After leaving Berlin I made my way to London to reconnect with the MBC group. Suellen and I got tickets to Man of la Mancha (nosebleed section) at the Piccadilly Theatre. It had only opened there in April, 1968.

We also got tickets to Yellow Submarine, which had just been released in July. We felt we had made a coup since it hadn't yet opened in the US.

We did not see The Graduate here.

Both of us were hungry for "American food," so we got a burger and fries at Wimpy's. I even relished the ketchup, which I rarely eat at home. We laughed that it was no longer possible to make snarky comments in English with the expectation that neighboring tables wouldn't understand us. Although English is almost universally understood in Europe nowadays, that was by no means the case in 1968. 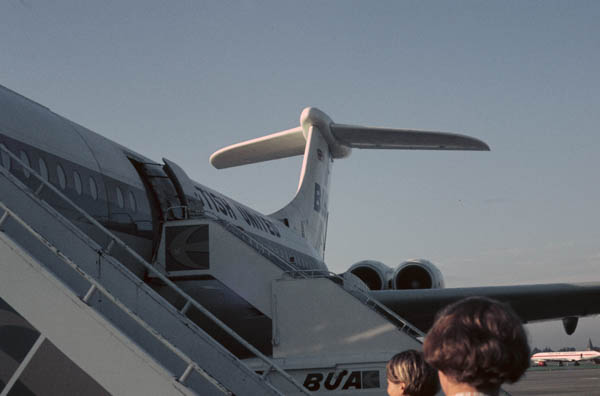 Finally we boarded our plane for the return home. Even though it had been a fabulous experience, I was thrilled to be back in the USA. In fact I seriously considered kissing the tarmac at JFK airport on our arrival!

(The airline was British United Airways and the jet appears to be a VC10.)