My parents were also touring Europe the summer that I attended school. I don't know if they had arranged that to check up on me with the potential of bailing me out if needed, or if it was sheer coincidence. (I have an opinion.) I took the train to Switzerland to meet up with them and others from Vicksburg for a weekend in Lucerne and environs. They were able to refill my cash supply, which periodically ran low.

Oddly I don't remember anything about any of the logistics of the summer, such as how I paid for extras. I do recall one time needing to get a money wire from home, but I have no memory how that worked. At the end of the trip, I took a jaunt on my own to Berlin, but I cannot recall how I made the airline and hotel reservations or how I paid for them. My father may have added me to his American Express card.

As one example, I broke my glasses the night before leaving home, but I didn't tell my parents because my mother was already a basket case over my pending adventure. It wasn't until the weekend in Lucerne that they discovered the glasses were broken. I think that somehow new glasses arrived before the trip was over, but I can't tell how.  (I generally wore contacts at that time, so the broken glasses weren't a tragedy from my perspective.) 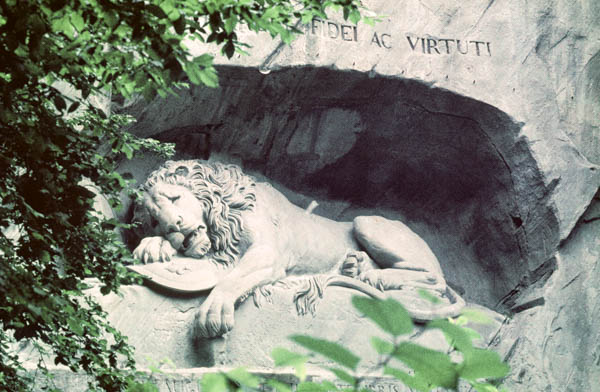 The Lion of Lucerne commemorates the Swiss Guards, mercenaries in the service of Louis XVI of France, who died in the attempt to defend the king and his family.

The inscription translates: "to the loyalty and bravery of the Swiss." 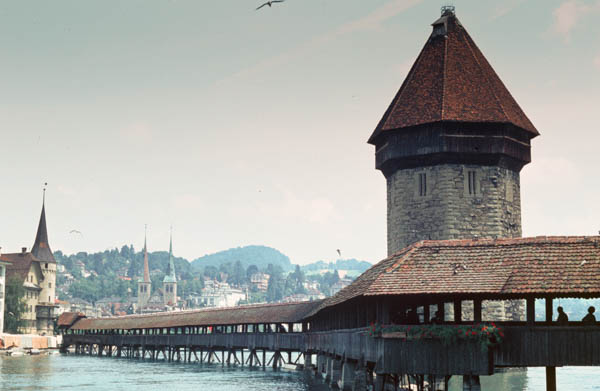 The Chapel Bridge is the oldest wooden bridge in Switzerland, perhaps in Europe, and dates to the 14th century, although I'm sure it had few original bits left. There were 16th century paintings under the roof.

The water tower also dates to the 14th century. Among other things it has been used as a prison.

In 1993 the bridge was almost destroyed in a catastropic fire. It has since been rebuilt.

The Jesuit Church was begun in the 17th century, but not completed until the late 19th century. Lucerne retained its Catholic orientation after the Reformation, unlike Zurich and Geneva, and the Jesuits were invited to start a college in the city. 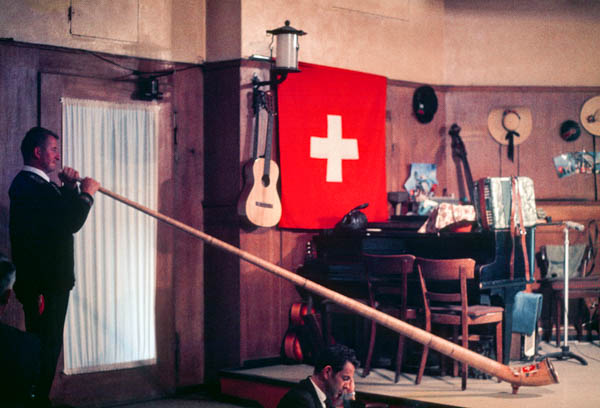 We attended a lunchtime folkloric performance that included an Alpenhorn. It was used to signal across miles in the open air, so hearing it in this confined space was overwhelming! 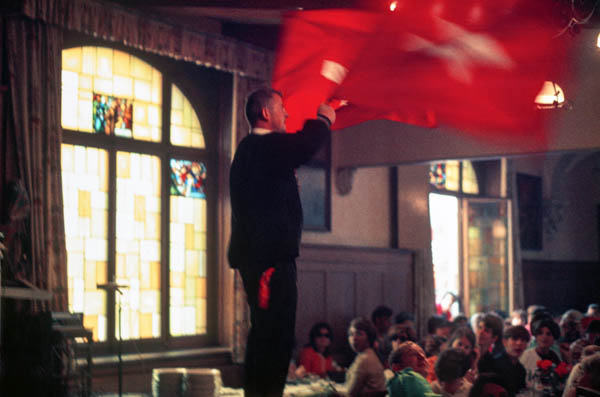 Another part of the show included twirling flags. The demonstration was exciting, especially when a corner of the flag clipped the forehead of one of the guests. It cut his forehead badly, but at least it didn't hit an eye. 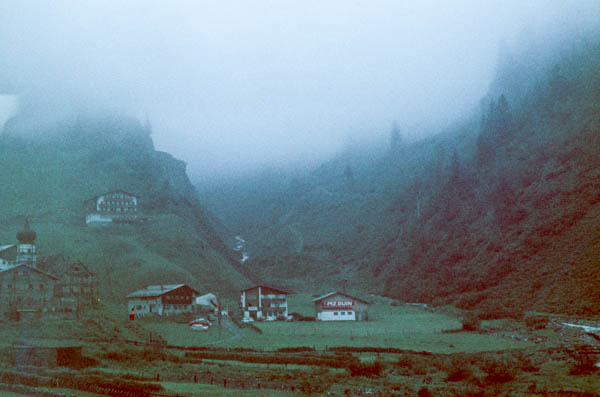 My parents' group left Lucerne on a tour bus and the company allowed me to join them. This Swiss village shows the weather I had come to expect.

One of my purchases in Lucerne was my first red trench coat. I haven't been without one since and am now on my third. Take that, London Fog! The other major purchase was a warm wool pullover sweater that I still use on occasion. I hadn't come to Europe prepared for cold weather! 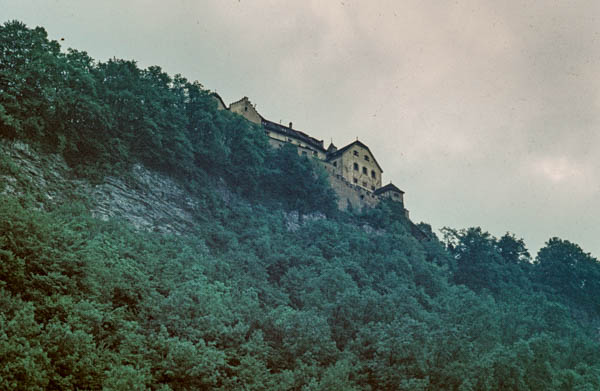 We traveled through Liechtenstein, but our only stop was a brief one to buy postcards and say that we had been there.

Vaduz Castle overlooked the postcard shop or gas station or wherever it was that we stopped.

It was fun to see them. Don't know why I didn't take any pictures of my folks.