Our tour is about to end. As we travel south from Heidelberg we are on our way to Kochel where our group will split up.

Speyer Cathedral is another outstanding Romanesque structure on our itinerary. It was built beginning in the 11th century.

Someday I really do hope to retrace at least some of our steps. 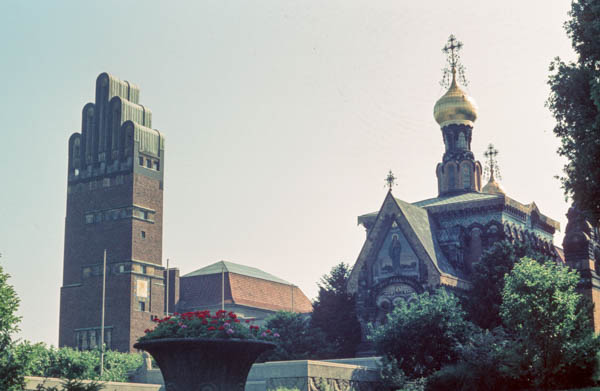 Mathildenhöh, in the city of Darmstadt, illustrates the height of German Jugendstil, better known by it's French name: Art Nouveau.

The "wedding tower" is part of the 1908 exhibition building. 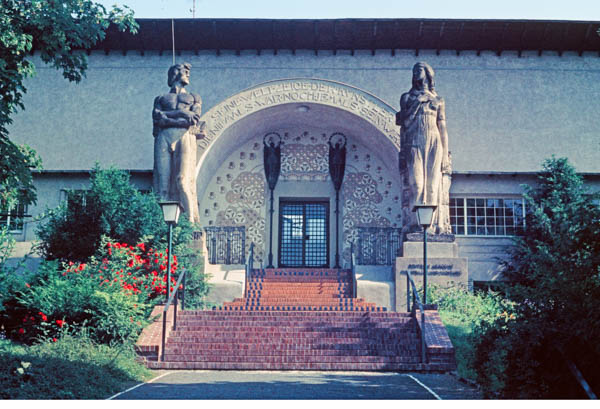 Since I first developed this travelogue in 2015, the web site with the best pictures of this phenomenal place has created an English version. This is the Ernst Ludwig house originally built in 1900. 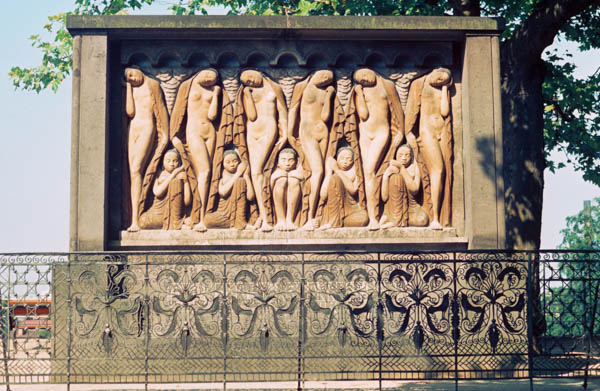 The gardens featured many monuments. 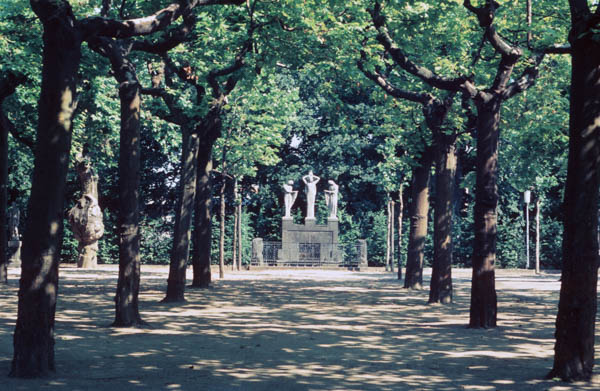 Even the trees in the garden were trimmed in stylized shapes. 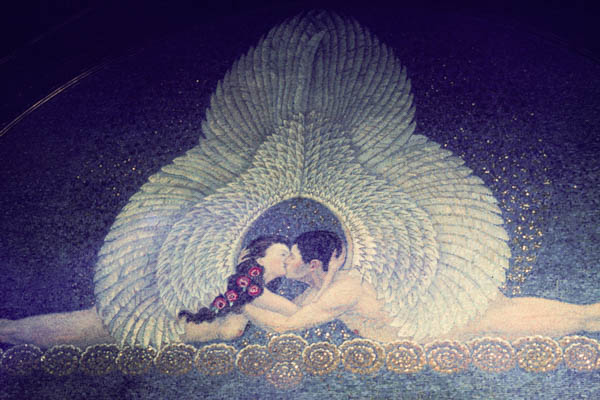 This mosaic was in the lobby of the wedding tower. I was disappointed that we couldn't visit any of the buildings. This picture was taken through the door. The mosaic is by Friedrich Wilhelm Kleukens, and is called The Kiss. It is no surprise that the location is a popular wedding venue. 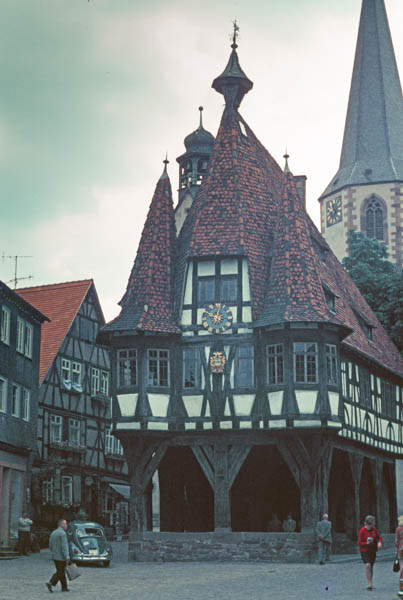 I didn't note the town where I took this picture. My slide identifies this building as the Rathaus, or city hall. The date was carved into the timbers: 1484. 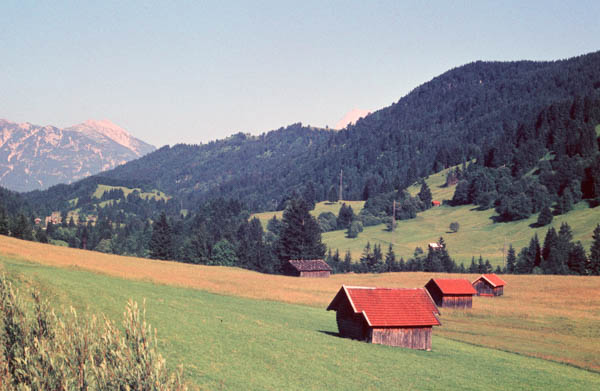 We knew we were nearing the end of our tour when we arrived in Bavaria. 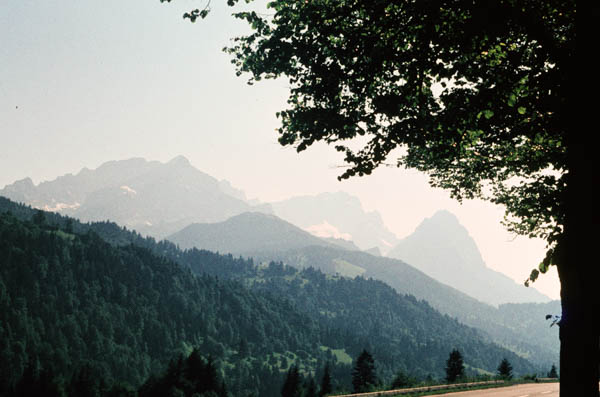 We were nearing some serious mountains, the Bavarian alps. 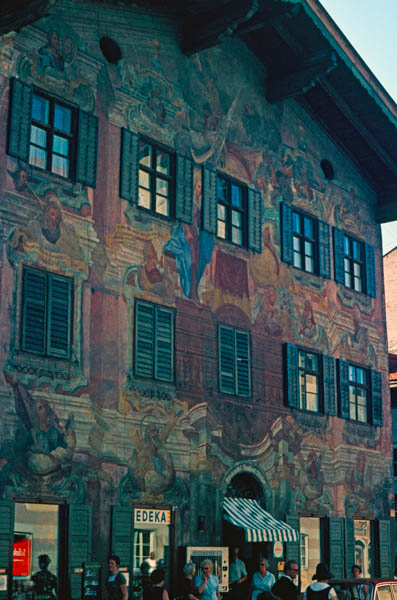 Our first stop was in the town of Mittenwald. This was my first exposure to decorative exterior painting common in the Alpine regions of Bavaria and the Tirol. 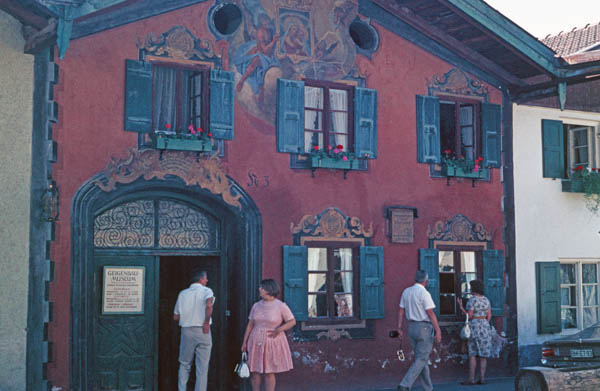 The museum dedicated to violin construction would be of much more interest to me now that I play the fiddle. Mittenwald was a major center of violin making through the 18th century. Since WWII there has been a resurgence of interested in hand-crafted instruments, and there is today a violin-making school in the town. 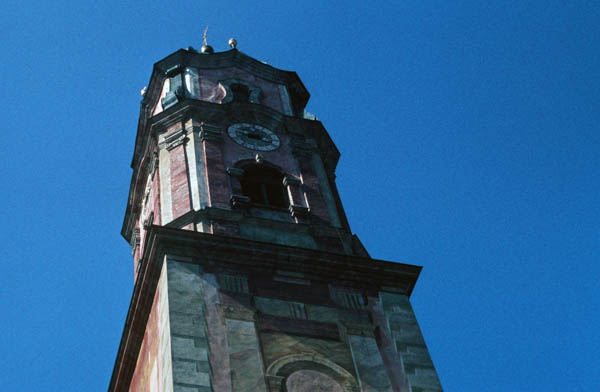 The church tower shows how tromp-l'oeil can enhance a building. The top of the tower is in relief, but the lower part is flat stucco painted to mimic relief. Hard to tell the difference. 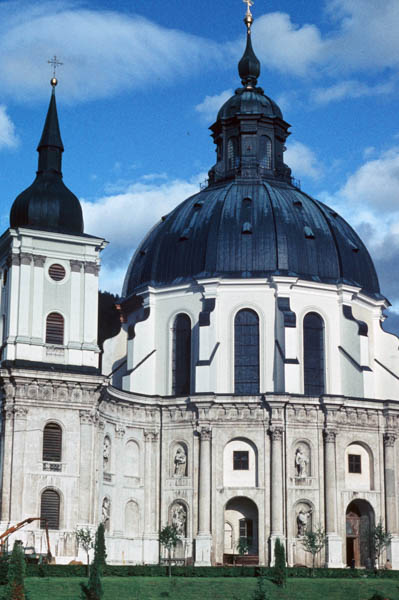 Our next stop was at Kloster Ettal, or Ettal Abbey. Although the abbey was founded in the 14th century, the current buildings date from the 18th century. The style is Baroque. 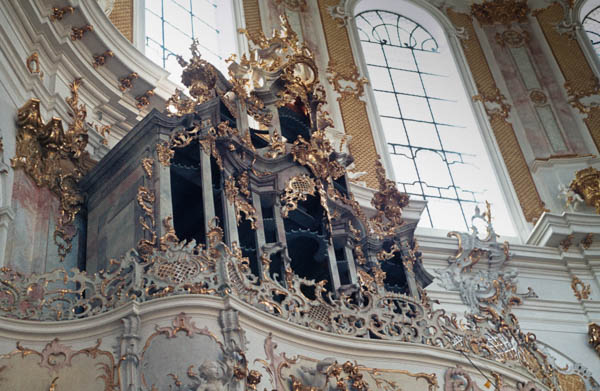 The interior was light enough that I could take pictures inside. Baroque is not my favorite, but this was magnificent. The organ. 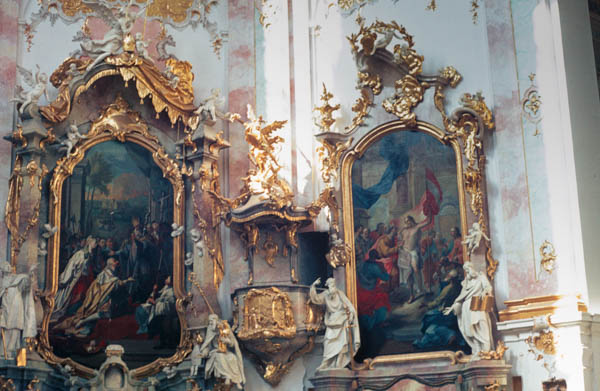 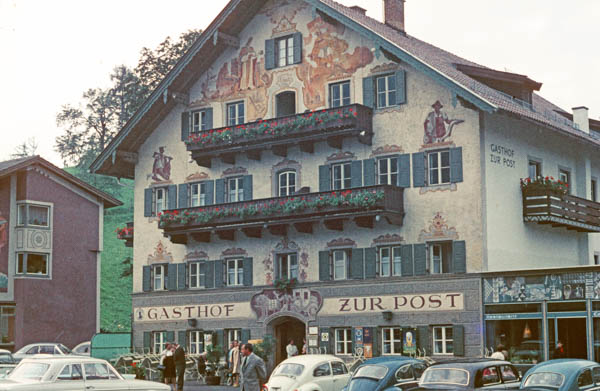 That night we spent our last time together as a group at the Gasthof zur Post in Kochel. I became quite familiar with it as it was one of the places where the Goethe Institute students ate meals.

Although I was excited about starting the next phase of the adventure, I was sad to bid good-bye to Suellen and the others who were continuing on to the Black Forest.