Our last day in Chicago was filled with interest, but not many photo ops. I've combined that time with our weekend visiting cousins in Durham, NC. 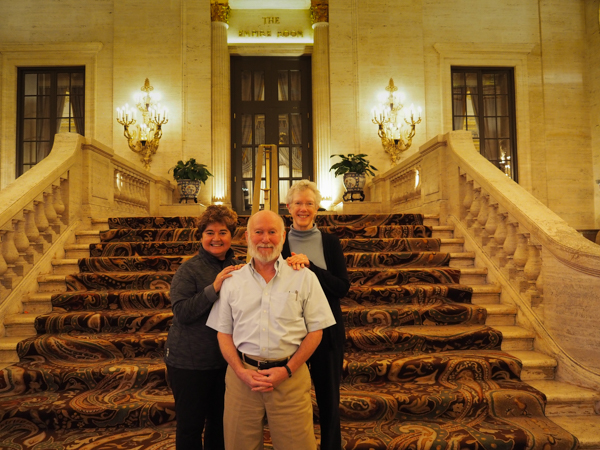 On our final day in Chicago we arranged to have lunch with Esther Perica, whom we had met on a cruise through the British Isles. Coordinating the event was somewhat difficult because she was enjoying a cruise through the Northwest Passage. Wi-Fi on a ship on the Great Lakes may be slow, but from the Arctic Circle it is glacial!

We had chosen Miller's Pub in the Palmer House as the location. It turned out that Esther and her husband of fifty years had their first date there!

We had a great time catching up and sharing future travel plans. In a week Esther would be leaving for a cruise on the Great Lakes! We hope she has as much fun as we did.

We said goodbye to the Palmer House and Chicago early the following morning.

Tiffany created three Peacock Doors for a jewelry store that was a long-time tenant at the Palmer House. This is one of the doors. The other two are mounted outside the Kay Jewelers that is now part of the shopping arcade.

We had planned to take the Blue Line train to O'Hare for our flight to Durham, but this was a trip filled with rearranged plans. The evening before we left we got an email from United Airlines warning us that train service to the airport was disrupted by construction on the tracks. Even though there was supposed to be a bus around the affected sections, we elected to take a cab rather than chance delays.

The very first plan we rearranged must have set the tone for the trip. Our original plan had been to take the Amtrak Cardinal from Chicago back to Charlottesville where we would pick up our car. Not long before the trip, however, we received an invitation to the 80th birthday celebration of one of my cousins in North Carolina. It didn't take much deliberation to change our plans to fly from Chicago to NC for the party. That was the BEST plan change of the trip!

We spent a great weekend with my cousins.

L-R: Beth Pease, Phil Hopkins (AKA "Hop"), Betty Pease Hopkins & Jim Pease. Betty was the birthday girl. Jim and I had a lot of fun pointing out that we were MUCH younger than she! And of course, I'm MUCH younger than Jim. 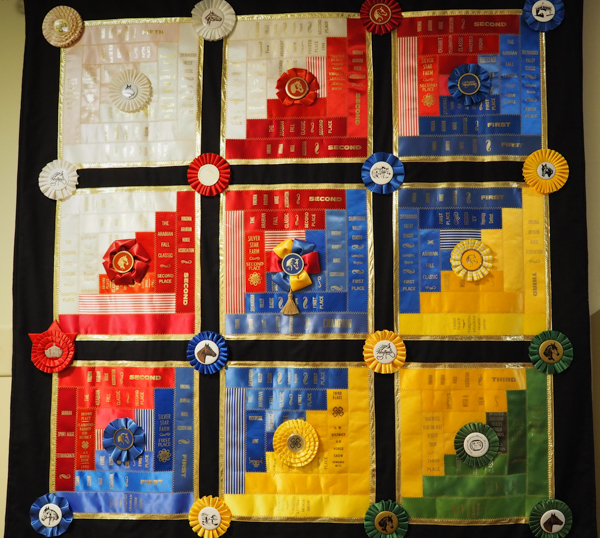 I always like to end my travels with a picture from home, because the best part of any trip is coming home. Usually it's a scenic shot, but for some reason I wanted to include this "quilt" that I made from a selection of ribbons from 50+ years of horse shows.

We really were glad to get back to our home and day-to-day occupations.