This was the original plan according to the pre-trip materials:

Passing through the rugged beauty of Georgian Bay -- sometimes called the sixth Great Lake -- we'll reach Manitoulin Island, the world's largest freshwater island and home of the Ojibwe people, part of the First Nation of Anishinaabe. Coming ashore at Little Current, we'll board a motor coach with a local expert and learn about the area's rich native and nautical history. At Immaculate Conception Church, we'll learn how the beliefs and customs of the Ojibwe intertwine with those of the Catholic Church. Then we'll have the opportunity to attend a traditional "smudging" ceremony and pow-wow demonstration.

As it happened our engine trouble meant that we were unable to make this stop. Instead we limped to Mackinac (it's pronounced Mack-in-naw) Island to allow two nights and a day for repairs. Our resourceful cruise staff pulled together extra lectures and games to keep us occupied and amused. A jigsaw puzzle materialized and was completed in record time. Fred Stonehouse had some additional lectures in his pocket. One focused on the U.S. Life-Saving Service in the Great Lakes. Their unofficial motto: "You have to go out, but you don't have to come back." 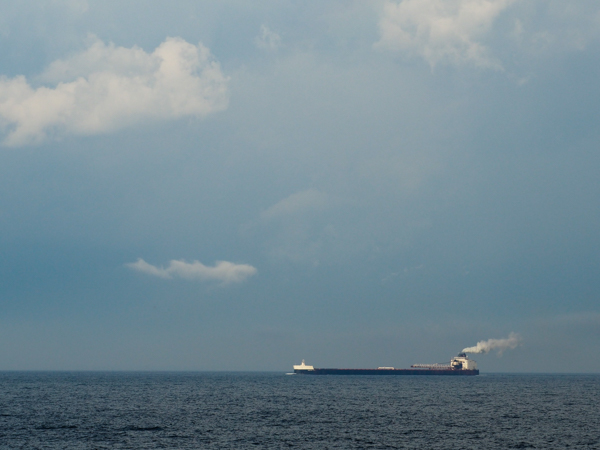 One of the ongoing "games" of the trip was recognizing other ships that we encountered. I was disappointed not to see many ships until we approached the Straits of Mackinac where we encountered this 1000-footer, the American Spirit.

She was built in 1978 in Lorain, OH. She is diesel powered and 1004' in length. Her original name was the "George A. Stinson." Ships are always called "she" even if they have a man's name. 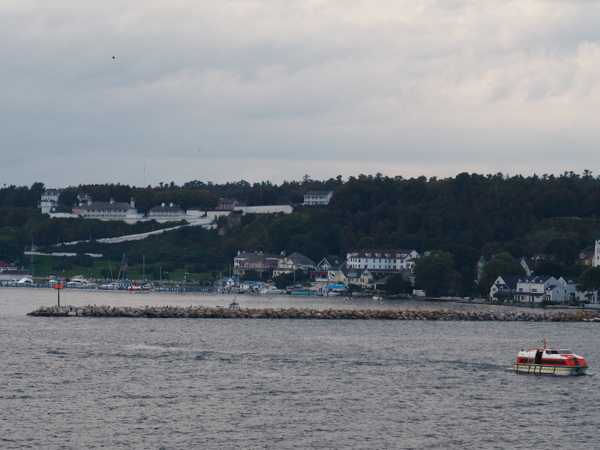 Many of us were spread around the deck as we approached the island. One sharp-eyed passenger spotted a bald eagle. I was able to capture a picture, but the eagle was only just identifiable.

There was a much larger (400+ passenger) cruise ship anchored outside the harbor, the MS Hamburg. Her passengers had to shuttle back and forth to the town on tenders. This is one way to make sure your crew is experienced in launching the lifeboats -- use them as tenders! Nevertheless, we preferred WALKING into all our ports of call.

The white buildings on the hill belong to Fort Mackinac. We visited it later. 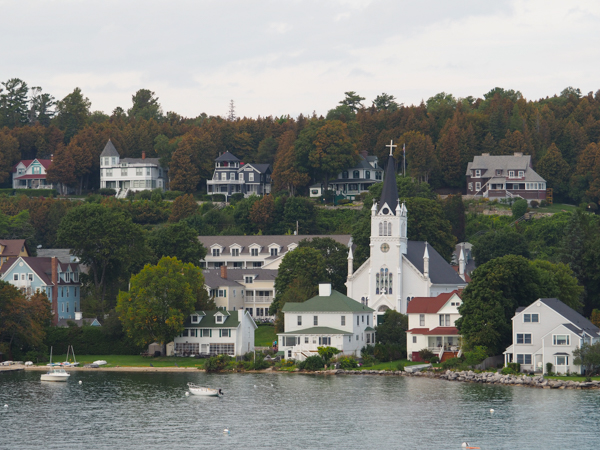 The village of Mackinac has been a popular summer destination since the mid-19th century. As one of the other passengers remarked, it looks a lot like a New England village. The summer "cottages" built by wealthy Victorian families are almost as large and opulent as the ones in Rhode Island. 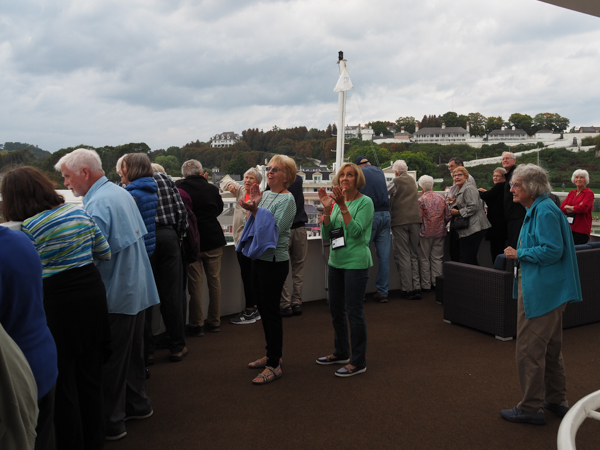 There was much applause when the captain maneuvered our limping ship safely into harbor without the full benefit of the lateral thrusters. Good job, Cap'n!

Some folks took advantage of the extra time in Mackinac for independent exploration.