Our last full day in Philadelphia had two goals. We wanted to visit the Barnes Foundation Museum and attend a noon concert on the Wanamaker Organ. We had visited the Barnes Arboretum on our earlier visit. The art collection was originally housed in a gallery at the same location, but was relocated to downtown a few years ago. We knew that timed tickets were required and we had heard that they often sell out, so we bought tickets online well before our trip.

Our weather luck finally ran out and it rained off-and-on the entire day. Thankfully I had brought an umbrella and the hotel gave one to Jim -- not just to use, but to keep. 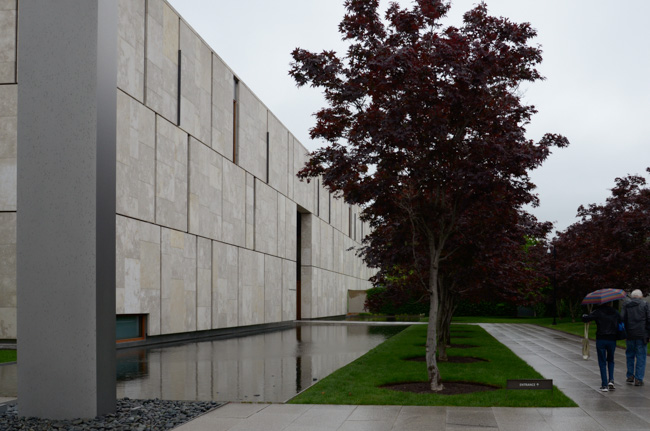 No pictures were allowed inside, so this is the only view of the museum. Normally I would have prowled around and taken more pictures of the grounds, but the weather was not encouraging. To see a sample of the displays, check the link above.

To be honest, neither Jim nor I are particularly enthralled by art museums anymore. This is another kind of thing entirely. Dr. Barnes intended his collection to be a school for art appreciation rather than "just" a museum. As such he laid out specific principles for its management, including its location in a Philadelphia suburb, and stipulated that it should never be moved. In the early 21st century the trustees were able to break that restriction by, among other things, agreeing to build the new facility to the same specifications as the original gallery and to retain the layout of the art as Dr. Barnes had designated.

We found the layout of the gallery rooms and the objects within each room and the extensive assemblage of metalwork to be the most interesting things about the place. I'm sorry I hadn't done more research before our visit (instead of just now) about the collection. I'm also sorry that some of the interesting descriptive links I had located after our trip have disappeared. It's possible that the trustees want to put the controversy behind them. 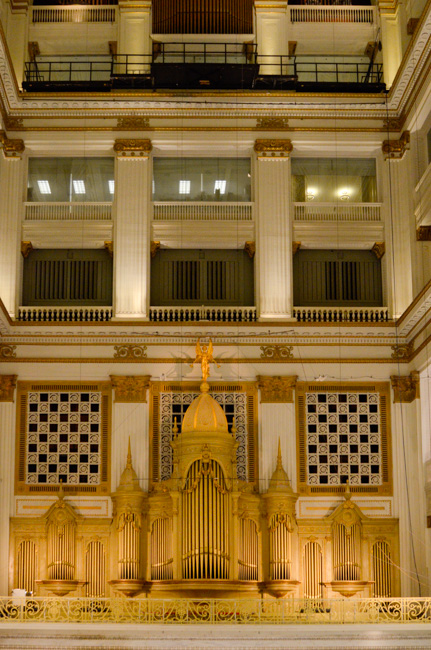 Our time at the Barnes was limited in any event because we had to get to Macy's (formerly Wanamaker's) for the organ recital at noon. On account of the rain, we decided to take the bus. It would have been almost as fast to walk due to the city center traffic, but we did stay dryer in the bus.

The organ was constructed for the 1904 St. Louis World Fair. John Wanamaker bought it in 1911 for the atrium of his store. It was later enlarged from its original immense size.

In addition to the obvious pipes seen here, there are additional ranks behind the checkerboard-patterned screens, the louvered screens immediately above, on the top floor of the atrium (only partially visible in this image) and also on the top floor above where I'm taking this picture. And who knows where else!?

The louvers open and close as part of the volume control.

We had a great space to listen to the concert tucked in between one of the columns and a manikin display across from the organ. There were a few others who had specifically come for the recital, but it was fun to see shoppers completely taken by surprise.

Peter Richard Conte, the current chief organist, played. We had been given a letter of introduction from Jim's high school friend John Binsfeld, who had been one of the regular performers on the organ. We hoped that would translate into a tour of the organ's workings, but unfortunately Mr. Conte's schedule was tight. Maybe next trip. 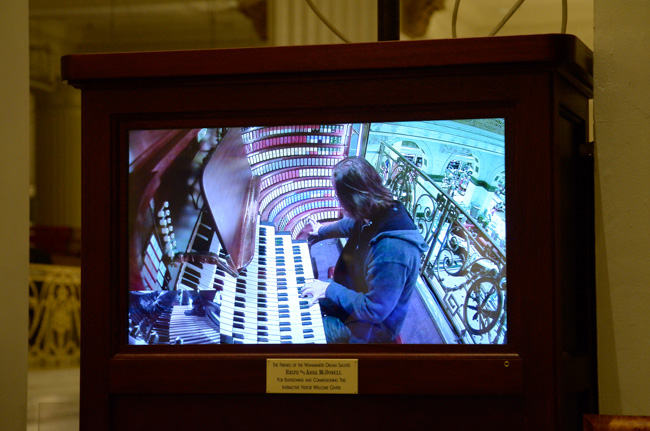 For those who stood next to the console a closed-circuit TV enabled them to watch the organist. The small inset on the lower left of the screen showed the organist's feet. 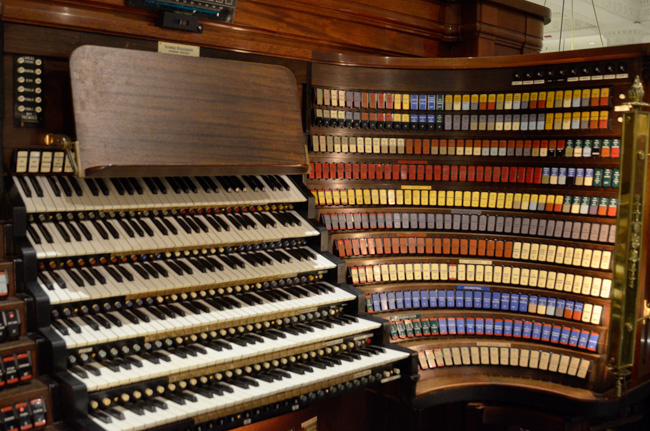 After the recital I did get a brief opportunity to take a picture of the console. There was an elderly (which is to say: "older than I am") couple who also reveled in being up close and personal with it. The wife had spent 50+ years as an organist and sat reverently on the bench and gently caressed the keys. 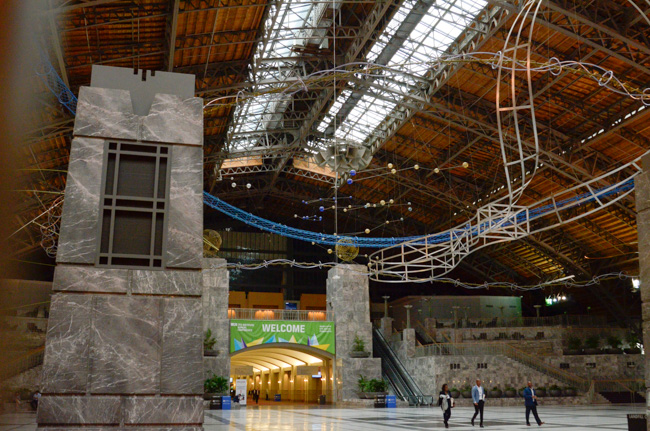 Our next-to-last visit was to the former Reading Terminal. The old train shed, shown here, now houses the Philadelphia Convention Center. At the time it was built in the late 19th century, the train shed was one of the largest such structures in the world. Today it is the oldest one extant and the only one remaining in the US.

I was not allowed to go into the Convention Center nor was I allowed to take a picture inside the gates (the guards were very apologetic but firm). This was taken through the iron fence.

After visiting the terminal we made another pilgrimage to Bassett's for ice cream. A fitting farewell to Philly.

The next morning we packed up and made our way to 30th Street Station for the train ride home. It was a grand trip and we are looking forward to the next one.