We had arranged for Jim's nephews, Matt & Ben Janus, to meet us for lunch and a tour of the Philadelphia Water Works on Sunday. I also set aside time to go to church. On our previous visit to Philly, which spanned two Sundays, I had visited Arch Street Presbyterian and First Presbyterian – both very different congregations. This time I decided to visit Old Pine Presbyterian, officially named "Third, Scots & Mariners." I don't know about the Scots & Mariners, but the "Old Pine" comes from the fact that the church is on Pine Street.

The church was founded in 1768 and the building dates back to that time although it has been much altered since.

The church is rather plain on the outside, but the sanctuary is glowing in color with elaborate stenciling and stained glass windows. 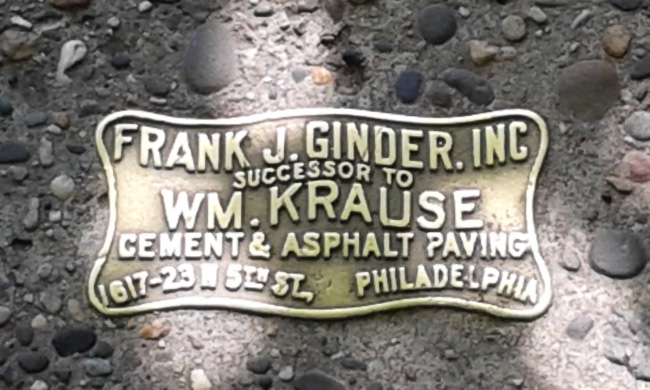 I elected to walk the mile to the church along Pine Street. The sidewalks were uneven, presumably because each homeowner was responsible for replacing and maintaining them and there were many different types: brick, stone, asphalt, concrete and perhaps others that I don't recall. Since I was watching my step much of the time I noticed that several contractors had "signed" their work.

I haven't found anything about Frank Ginder, but John & Henry William Krause obtained a patent in 1873 for a method of laying pavement. The "Firm of William Krause" was registered as a trademark in 1877. The business was artificial stone and artificial stone pavement and the firm was still extant and advertising in 1919. 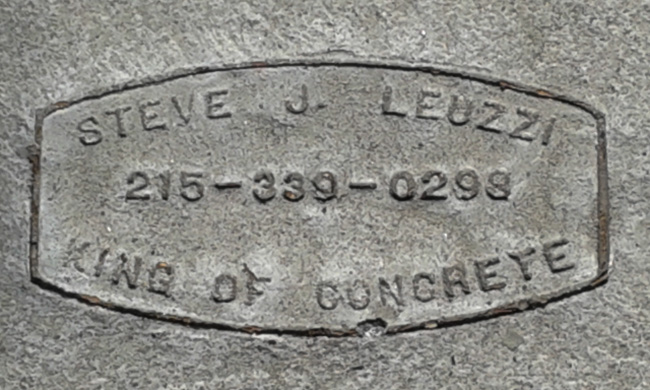 Not everyone went to the trouble of using a nifty brass plaque. Steve Leuzzi is still active. Other "signed" work was done by Mark Cement Contractors and Dibella General Masonry. 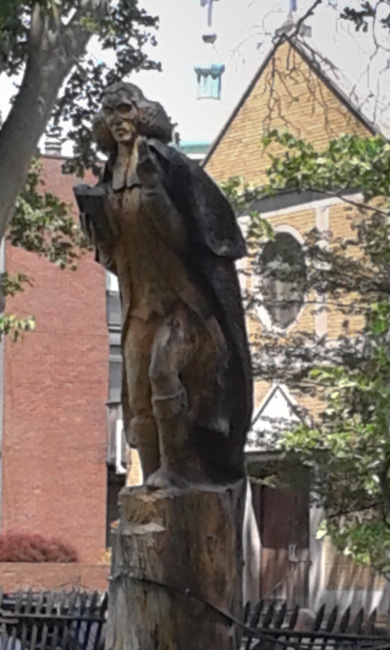 Reverend George Duffield (1732-1790) was the pastor of Old Pine church and the chaplain of the Continental Congress during the American Revolution. 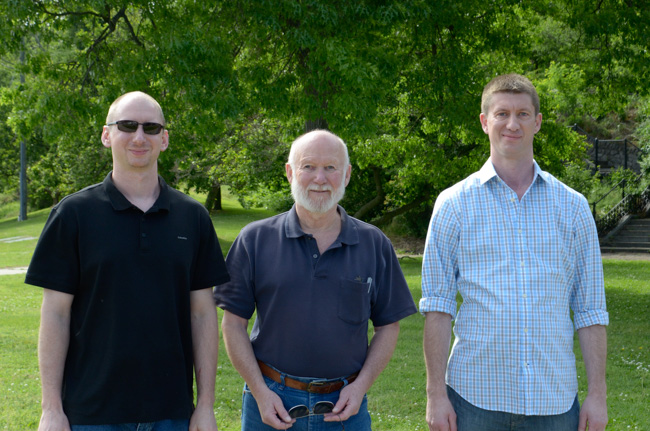 After church I hoofed it back to the hotel where Jim and his nephews Ben (L) and Matt (R) were waiting. We first had lunch at a local Szechuan restaurant named "Dan Dan." The food was delicious, if somewhat incendiary. Dan dan noodles is one of our favorite dishes, but their version was rather different than others that we've had. We're planning to try some modifications. 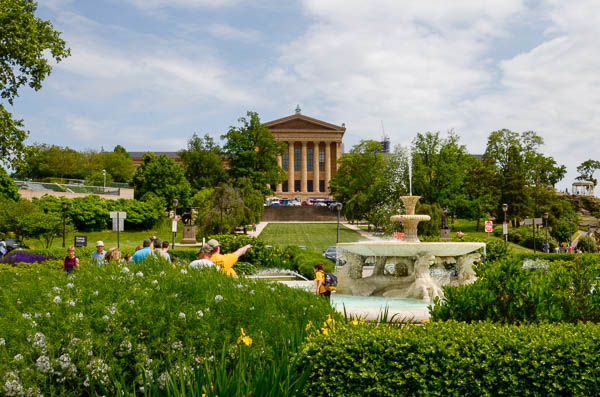 After lunch Ben drove us to Fairmount Park, the location of the Fairmount Water Works as well as the Philadelphia Museum of Art shown here. It was a beautiful day and the park was crowded. Finding a parking place was tough, especially since Ben admitted that he had forgotten how to parallel park! That's what happens when you live in the 'burbs. Use it or lose it!

The Art Museum is still on our list of things to do next trip.

The hill where the museum is situated is the "faire mount" that the park is named after. There was once a brief online history of the park highlighting the need for a clean water supply as being one of the driving forces behind its creation and expansion. It has disappeared, so this description will have to do.

There was a private party underway at the Water Works, so I was unable to get any good pictures of the exterior. If you want to see a partial picture check this image from our earlier visit. Someday I hope to get on the other side of the Schuykill to get a really good picture.

After crashing through the defense cordon at the private party, we were able to get into the Water Works Interpretive Center. It had been closed due to flooding during our last visit to Philly.

Although the buildings are preserved, very little of the actual works remains.

The Water Works originally consisted of steam engines that pumped water to a cistern in the center of the city where City Hall now stands. There were two problems with this: the cistern was too small to meet the needs of the growing city and the steam boilers were subject to catastrophic explosions.

On to Plan B. Large reservoirs were created on the "faire mount" and the Water Works were modified to use water wheels to pump water to the reservoirs, which then allowed gravity to distribute the water throughout the city. The water wheels, however, were unable to pump continuously because the river is tidal at Philadelphia.

On to Plan C. This original 1851 Jonval Turbine (underneath the gears) was one of several installed to drive the pumps. The turbines, which were state-of-the-art for the day, could work more efficiently than the water wheels.

The interpretive center also includes a mussel hatchery. Mussels play an important role in keeping fresh water clean and their populations are declining. Mussels hatched at the center are destined for nearby lakes and rivers. 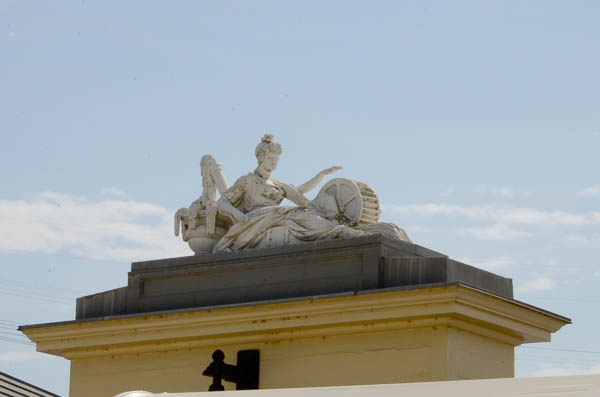 The Water Works were designed to be beautiful as well as functional and soon became an international tourist attraction. Luminaries such as Charles Dickens and Mark Twain visited and commented on them. This is one of two allegorical sculptures that adorn the old mill house. The woman with the water wheel represents "Schuylkill Freed" and personifies the Water Works. 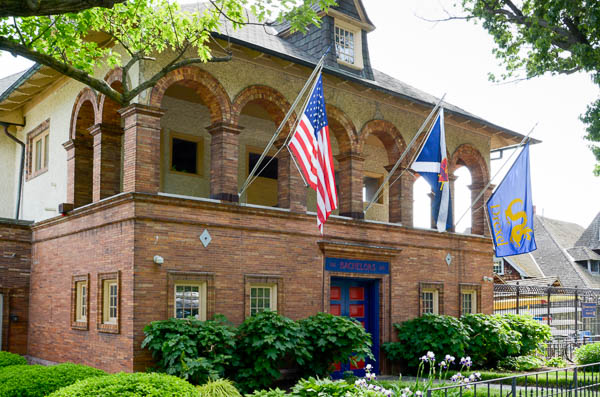 After visiting the Water Works, we strolled along Boathouse Row. When Jim and I used to take the train to visit his folks, I loved to watch the lighted houses from across the river -- particularly at Christmas.

Drexel has a competitive crew program for both men and women. It operates out of the Bachelors' Barge Club on Boathouse Row just up-river from the Water Works. 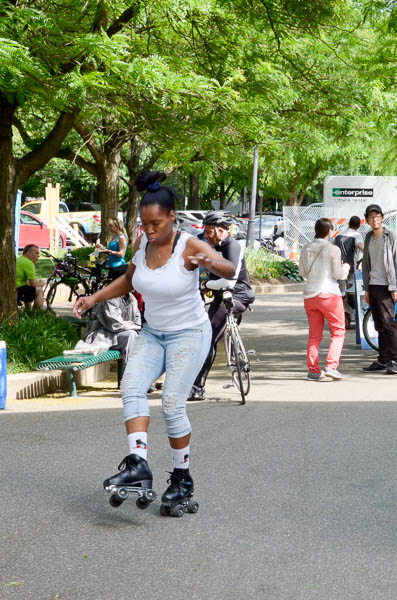 Throughout our time in Philly we saw a variety of buskers on just about every street corner. The group here was unique in that they were doing dance moves on roller skates accompanied by a boom-box. There were a couple of women and about three men.