The next two days were taken up by events associated with Jim's reunion. I didn't take my camera to most of them, so I only have a few cell-phone snaps of those events. 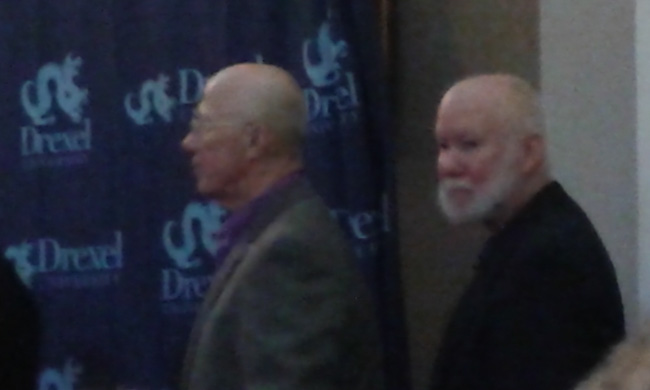 Perhaps people can take all kinds of nifty photos with a snazzy iPhone, but my el cheapo Android from TracFone leaves something to be desired. I'm told that we will get a nice suitable-for-framing picture of Jim being inducted into the "Golden Dragon" society, but until such photo is received and scanned, this will have to do. He's waiting in line for the presentation.

The presentation was preceded by a very nice buffet breakfast and followed by a luncheon where we met many of Jim's former classmates. There was only one that he had really spent much time with as an undergrad, however. All of the other alumni that we met during the weekend were interesting and delightful folks. We were both glad that we went. 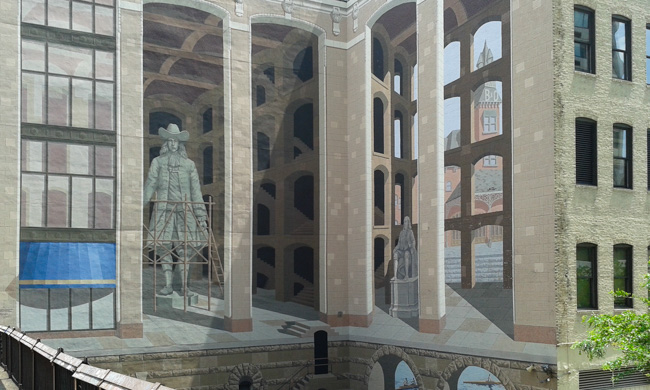 We elected to skip the afternoon events. Walking back to the hotel after lunch, we passed this large trompe l'oeil mural depicting William Penn on the left and a much smaller Ben Franklin on the right. Both depictions are of prominent statues: Penn's from the City Hall and Franklin's from the Franklin Institute. The surrounding "structure" appears to be entirely fanciful.

Philadelphia is noted for murals and we saw several during our wanderings. 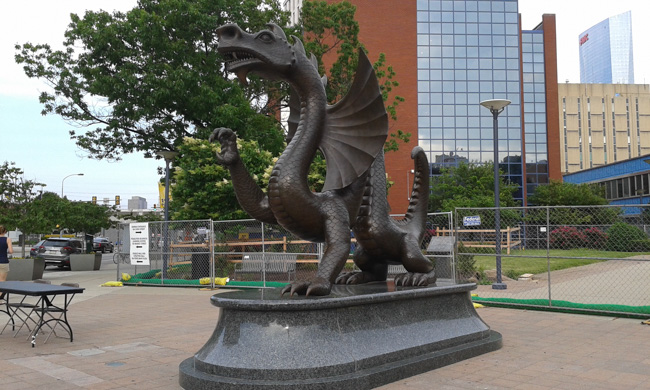 That evening we took the trolley to a "Bites at the Bistro" gathering. It was a hoot being dolled up in our glad rags and clambering aboard the seen-better-days trolley – for free no less with our new temporary senior passes.

On the way from the trolley stop to the event, we passed the Drexel Dragon, which was sculpted by the same artist that created Philbert.

Drexel has long had a culinary school and we learned that the current students were the cooks for the various events. The food was good and varied – and there was a lot of it. 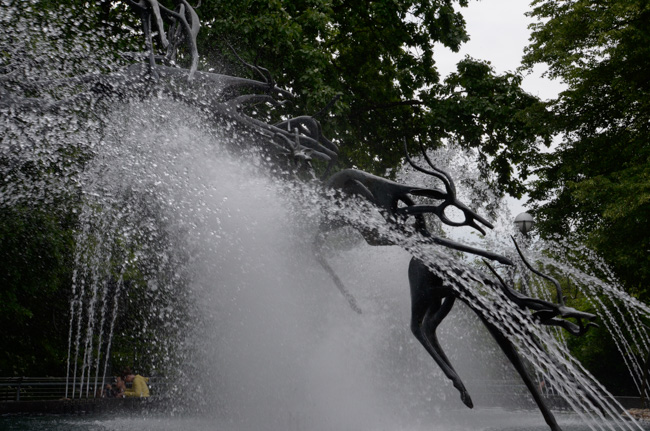 The following day included a day at the Philadelphia Zoo with a catered luncheon.

We continued our exploration of public transit by taking the bus.

Neither of us is a particular fan of zoos, but there were many things to see there besides confined animals. This gazelle fountain was hard to take a picture of, but quite lovely in person. 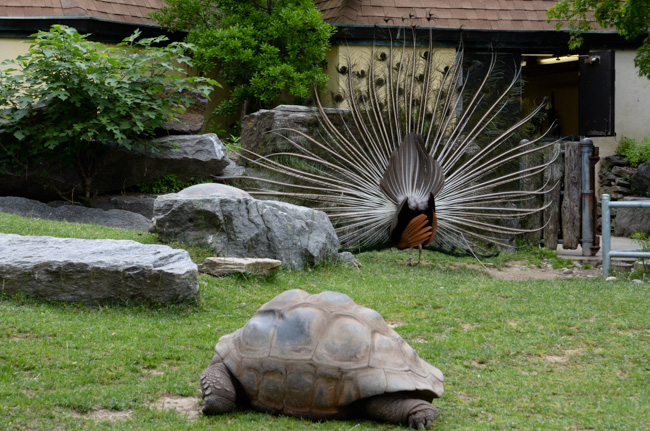 In case you ever wondered what the backside of a peacock is like. This fellow was strutting his stuff for a fetching peahen. In addition to the display of his magnificent tail, rather more striking from the other side, he fluttered his wings and wiggled his hiney. It was actually more fun watching from this angle. 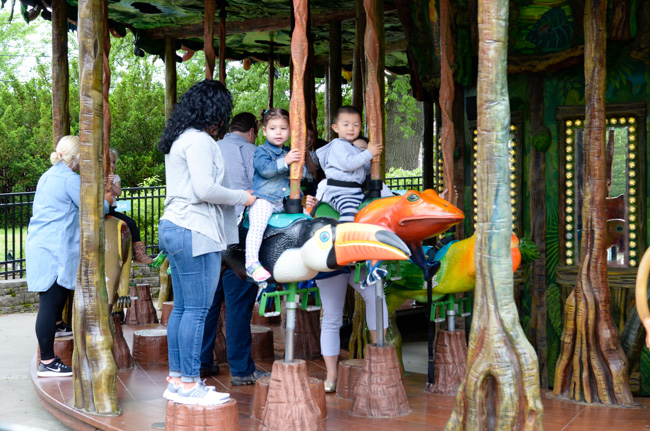 My goal at the zoo was to see the Amazon Rainforest carousel. It was a popular attraction with kids, parents and grandparents. 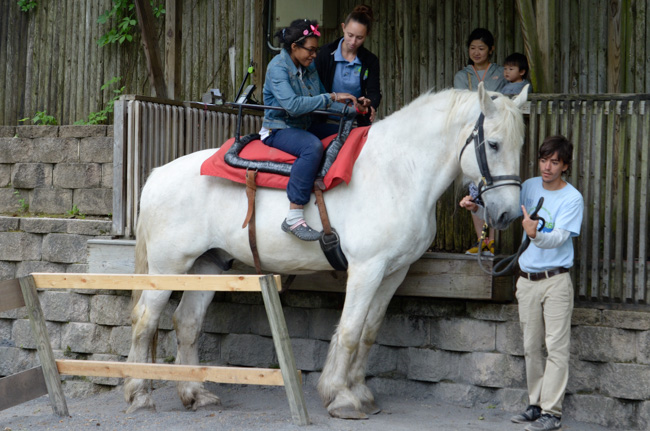 Next to the carousel was another popular attraction: draft horse rides. This young woman seemed to have a mild form of cerebral palsy that kept her pretty rigid throughout the brief ride. It made me think of how regular horse therapy can benefit many types of physical (and mental) disabilities.

She seemed to enjoy the excursion very much. 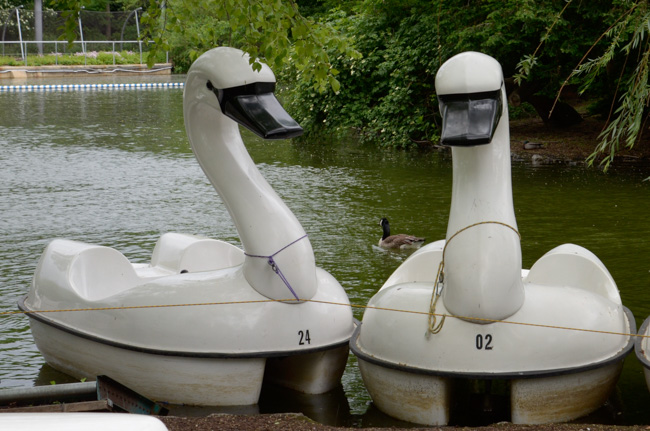 Rides on the whimsical swan paddle boats were another way to enjoy the afternoon. 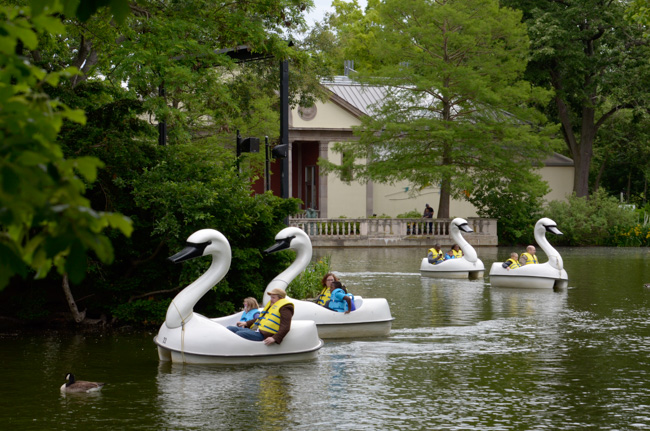 The instructions were clear that the swan rentals were for two times around the island in the pond. It wasn't clear how this would be enforced if it ever became necessary. I expect that the paddlers tired out before they used up too much time. 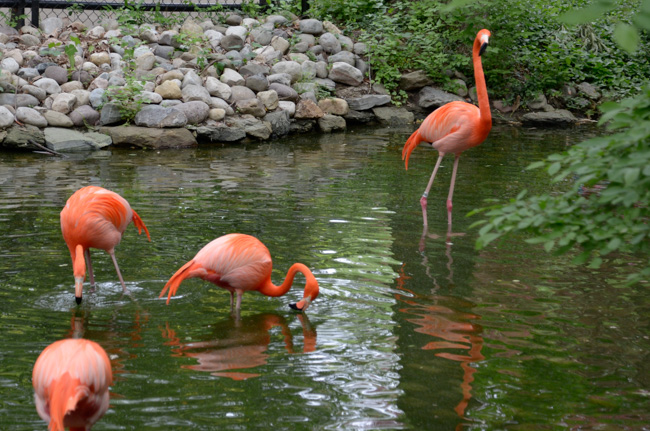 These were labeled as Caribbean flamingos, but they are also known as American flamingos. They were once native to the southern US but all but captive populations have disappeared. They are much more colorful than the flamingos that we saw in France last fall.

At lunch at the zoo we had an interesting conversation with Dr. Kate Gonder, director of the Bioko Biodiversity Program located on an island off the east African coast. Her enthusiasm was contagious and has almost tempted me to consider a visit to sub-Saharan Africa. It's still hot, though.

That evening we enjoyed "Drexel After Dark" at the Academy of Natural Sciences. It was fun to prowl the exhibits while grazing on more yummy finger foods supplied by the culinary students.