We left Tristan on 12 March and arrived at Cape Town on 17 March. Some of us were looking forward to getting home and some were planning to spend additional time visiting South Africa. Others wished the cruise would never end. One of the passengers even inquired about extending her cruise as the ship traveled up the coast of Africa, but alas, it was already fully booked.

We were back in sight of land. The city of Cape Town sprawls along the seacoast and wraps around Table Mountain, partially covered by clouds. The pointy peak to the right is Lion's Head, which we will be visiting on our city tour.

It was a blessing to be in a harbor after one of our roughest cruising days and nights. Neither Jim nor I got much sleep and at one point we were convinced that the ship was breaking in two.

We felt it ironic that we FINALLY encountered crystal clear weather once it was no longer possible to get a view of the southern sky away from light pollution!

After three weeks in the South Atlantic, we saw our first whales in the Cape Town harbor! Whales, severely over-hunted through the mid-twentieth century, have not recovered in the southern ocean. There is doubt whether some species will be able to rebound. Recovery is fragile at best.

The only picture I could get was of the spout. An expert could probably identify the type of whale just from this. Not I. 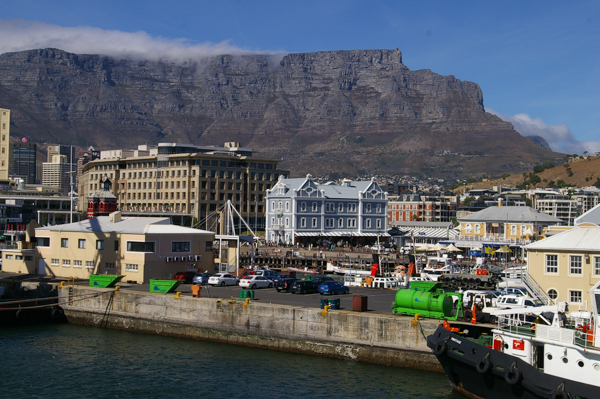 We waited quite a while for our harbor pilot before cruising into the busy Cape Town harbor. We spent two days touring this area before catching our plane for the long ride back to the US.

Our first day was an excursion to the South African wine country. The landscape is quite beautiful and the wines ain't bad either.

This Cape Dutch home at the Blaauwklippen winery was built in the late 17th century.

After a delicious al fresco meal at the winery followed by a wine tasting, we were off to the town of Stellenbosch.

This is the Dutch Reformed Church in Stellenbosch.  This denomination was complicit in the mistreatment of the indigenous populations and the program of apartheid in the same way many churches in the U.S. supported slavery. Nowadays the church works for unification and reconciliation, but there is a long way to go. 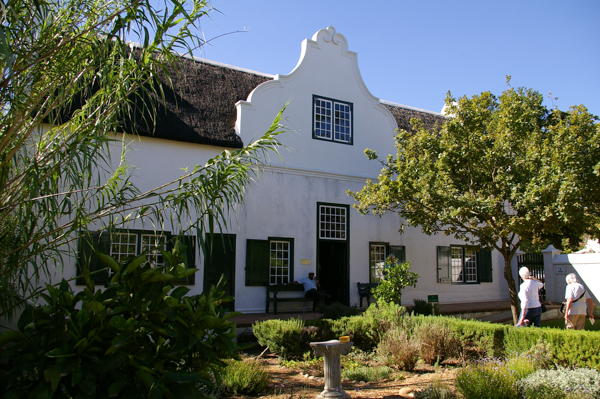 Stellenbosch had a wonderful historical museum of the European settlement of the area, but barely a nod to the black African experience. 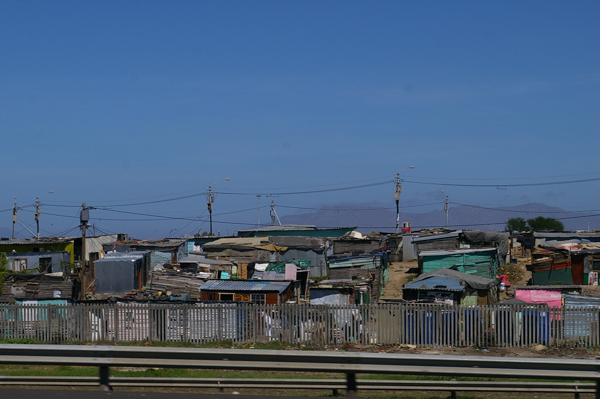 No reading of history prepared me for the actual squalor of South African "townships." During the days of apartheid, black Africans were forced to live in these worse-than-slums and many still do.

The government struggles to provide decent housing for these residents, but the process is complicated by a legacy of distrust and abuse. Not to mention the fact that a decent neighborhood takes a lot more space per family.

Our group was large enough to divide into two buses. We were lucky to get on the bus with a guide who was frank about the challenges facing South Africa after the decades of apartheid. About half-way through our tour of the city, those on the other bus were trying to squeeze onto ours.

Lion's Head Peak overlooks the harbor and much of Cape Town.

Robben Island is barely visible in the center of the picture because of the haze. It was not on our itinerary, although I would have liked to visit it. It is most famous as the place where Nelson Mandela was imprisoned for 27 years along with other leaders of the African National Congress. 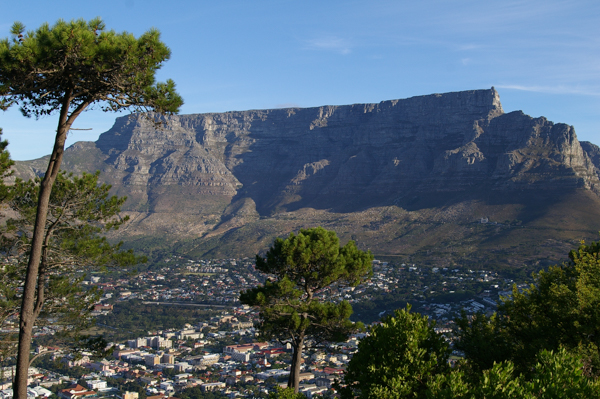 We were scheduled to take the cable car to the top of Table Mountain, but it was closed on account of wind. Residential neighborhoods reach right up its flanks.

This picture may not be very scenic, but it is meaningful to us. The large white ship in the center of the picture is the MV Discovery, the ship that we took on our cruise to Antarctica in 2008. At the time we thought it was a small ship, which it is by most cruise ship standards. It held about 500 passengers.

The "tiny" white ship facing us to the left of the Discovery's prow is the Corinthian II! We were amazed at the difference in size when they were side-by-side.

After our city tour we returned to the ship for dinner and our last night on board. Although Cape Town is a lovely city, we were warned against leaving the ship and strongly admonished not to leave the guarded harbor area. It can be a dangerous place at night. Most of us spent the evening packing as our luggage would be loaded onto buses early the next morning.

Click your browser's "back" button to return to the index or click the link to continue on our second day in Cape Town.