We left Ushuaia on the 26th of February and arrived at the Falklands on the 28th. The South Atlantic is notoriously rough. Even though we didn't encounter horrible seas, I discovered that I would be much happier if I put the Scopolamine patch to work. I did not suffer any of the potential negative side-effects. Jim has no trouble with sea sickness.

We spent two days in the Falklands and visited three sites: West Point Island, Saunders Island, and Stanley, the capital city. Jim and I had visited West Point island and Stanley before on our Antarctica trip, but the conditions were very different this time. For one thing we were travelling in a small group rather than with 500 others so we didn't overcrowd any site.

The Falklands had a place on the world stage in 1982 when Argentina invaded the islands. For a summary of the conflict check The Falklands War: An Overview. Argentina is still rattling sabers about the Falklands, especially now that there is a likelihood that oil will be discovered in the area. At the time of our trip the Argentine government was putting restrictions on shipping calling at the Falklands without first getting permission from Argentina!

Our first stop was West Point Island where we visited the same rookery as in 2008. On that trip we were on a much larger ship and had a long tender trip into the harbor. The Corinthian II cruised into the harbor and we used Zodiacs for the short hop to the dock. 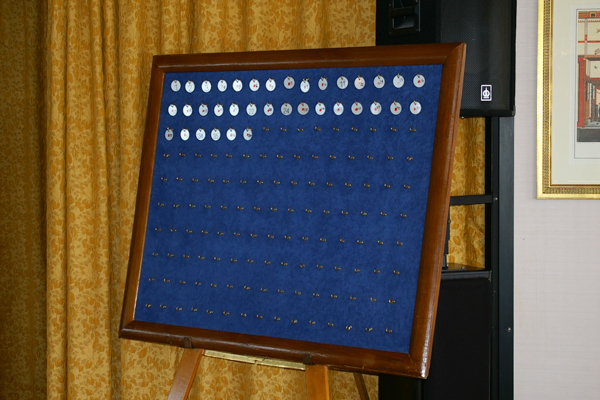 The ship kept track of disembarking guests with this board. We flipped our assigned tag when leaving the ship. When we came back, the tag was "reset." It was easy for the staff to check that no-one was left behind. On one occasion a returning guest managed to get past the board without flipping his tag. The staff ran him down in his stateroom to verify that he had in fact returned. 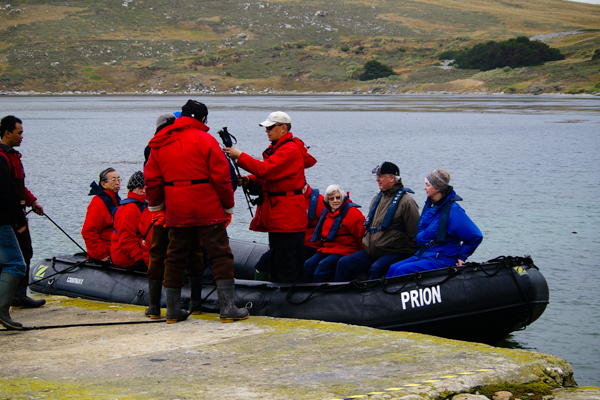 We learned to distinguish between "dry" and "wet" landings. This was a dry landing because we had a pier and didn't have to wade to and from the Zodiacs. This became a luxury.

The life vests for the Zodiacs were very compact. I assume that had they been needed, they would have inflated to a requisite size. We never found out.

Every time we left the ship, staff members buckled us into the vests to ensure it was done properly! Subsequent experiences with these vests has shown that there is a knack to putting them on. 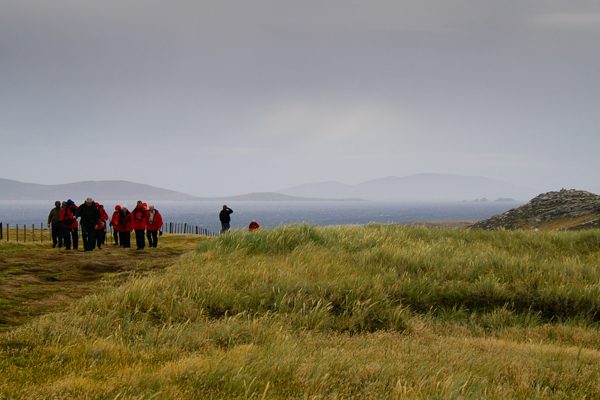 The rookery is on the opposite side of the island from the harbor. Most people elected to walk the mile or two, but the residents had a Land Rover to give a lift to those who desired it. 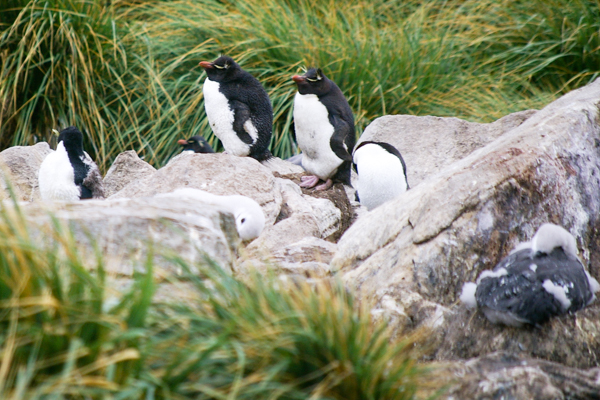 On our earlier visit there were many Rockhopper penguins brooding their eggs or tending little ones. Now most of the Rockhoppers have gone and black-browed albatross were tending their chicks.

These birds are still fledging.

Penguins and albatross are companionable in this location with adjacent nesting areas. 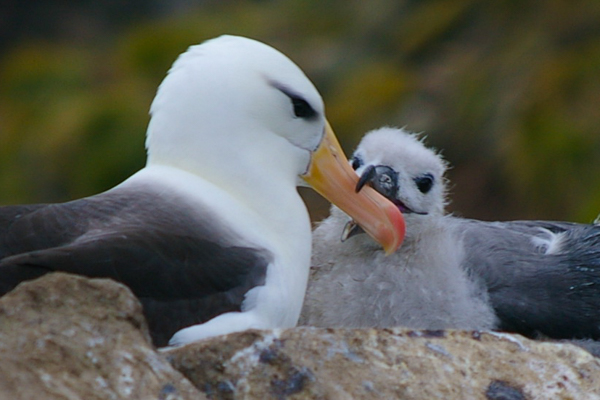 This not-so-little one is begging its parent to regurgitate dinner. Yum!

Saunders Island, our next stop, featured gentoo, king and rockhopper penguins as well as other birds.

This was a wet landing. I was dismayed to learn that the boots that I had brought for such landings were not tall enough. The program materials stated that 10" would be sufficient, but it was not. I squished through this visit. The ship had a stash of knee-high boots for hapless travelers, and I found a pair that almost fit. 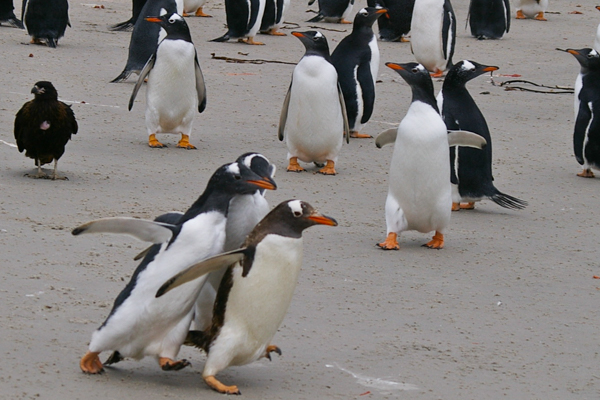 Gentoos rear two chicks each breeding season and were the most numerous of the local birds. This parent being pursued by hungry brats, may be wishing he (or she) never heard of babies.

The adult bird is beginning to molt and can't even fish for itself let alone two demanding youngsters. They, on the other hand, are fully fledged and can fend for themselves.

The large dark bird to the left of the picture is a Striated Caracara. They are attracted to a variety of objects and one swiped a walkie-talkie from our guides while we were eating. Hilarity ensued as the staff struggled to retrieve it. 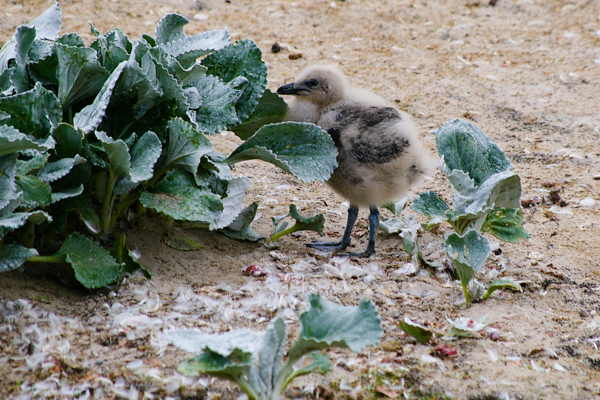 Another bird of prey much in evidence was the Skua. They get a bad rap as efficient predators, but this chick shows that they can be fuzzy and cute as well. The plant is called "sea cabbage." 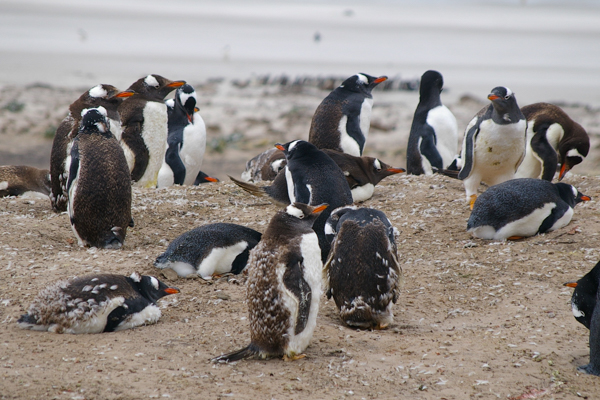 These birds are molting. Penguins shed all their feathers at once and are unable to swim during the 2-3 weeks it takes to replace them. They must build up adequate fat reserves prior to the molt.

All the molting birds that we saw -- and there were many of them -- looked just as scruffy as these. The ground is littered with shed feathers, which looked almost like snow. Even feathers that are black on the bird look white on the ground. 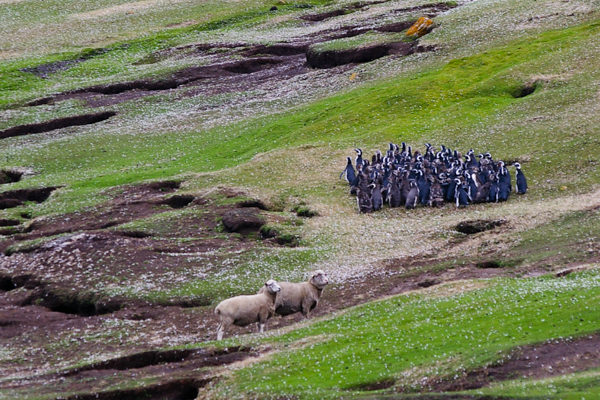 Magellanic Penguins live in burrows dotting the slope. The "snow" dusting the ground is penguin feathers.

Many, if not most, of the Falkland Islands are inhabited by sheep and Saunders Island is no exception. Sheep eat the native tussock grass wherever they can reach it, and it only survives in places where the sheep cannot go. Residents pay more attention to preserving this critical habitat in recent years and we saw preserves protected by fences.

Ruddy-headed Geese are similar to the females of the much-more-common Upland Geese.

We met our first King Penguins here. They are dignified-looking birds in general, but every now and again one will erupt into a raucous "look at me" display.

Shortly after I took this picture, this group began to move toward the beach. The noisy bird marched in the lead nodding his (or her) head like a drum major. I wondered if the call was a signal of some sort. 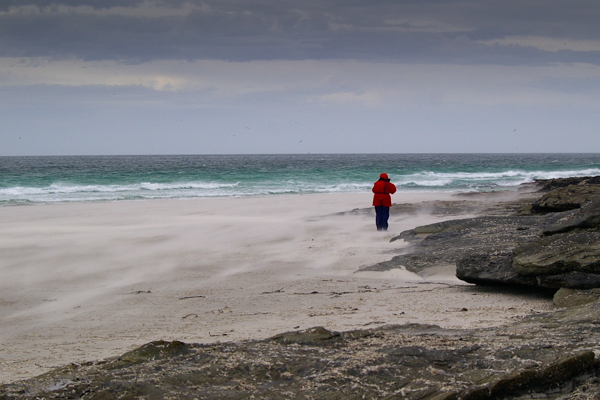 As on West Point Island, there was a hike to get to the areas where birds were found. Most of the walking was on a VERY windy beach. It was OK walking with the wind, but as soon as you turned around blowing sand began to flay your face. I ended up walking backwards to return to the landing area.

Click on your browser's "back" button to return to the overview page or continue to Stanley.